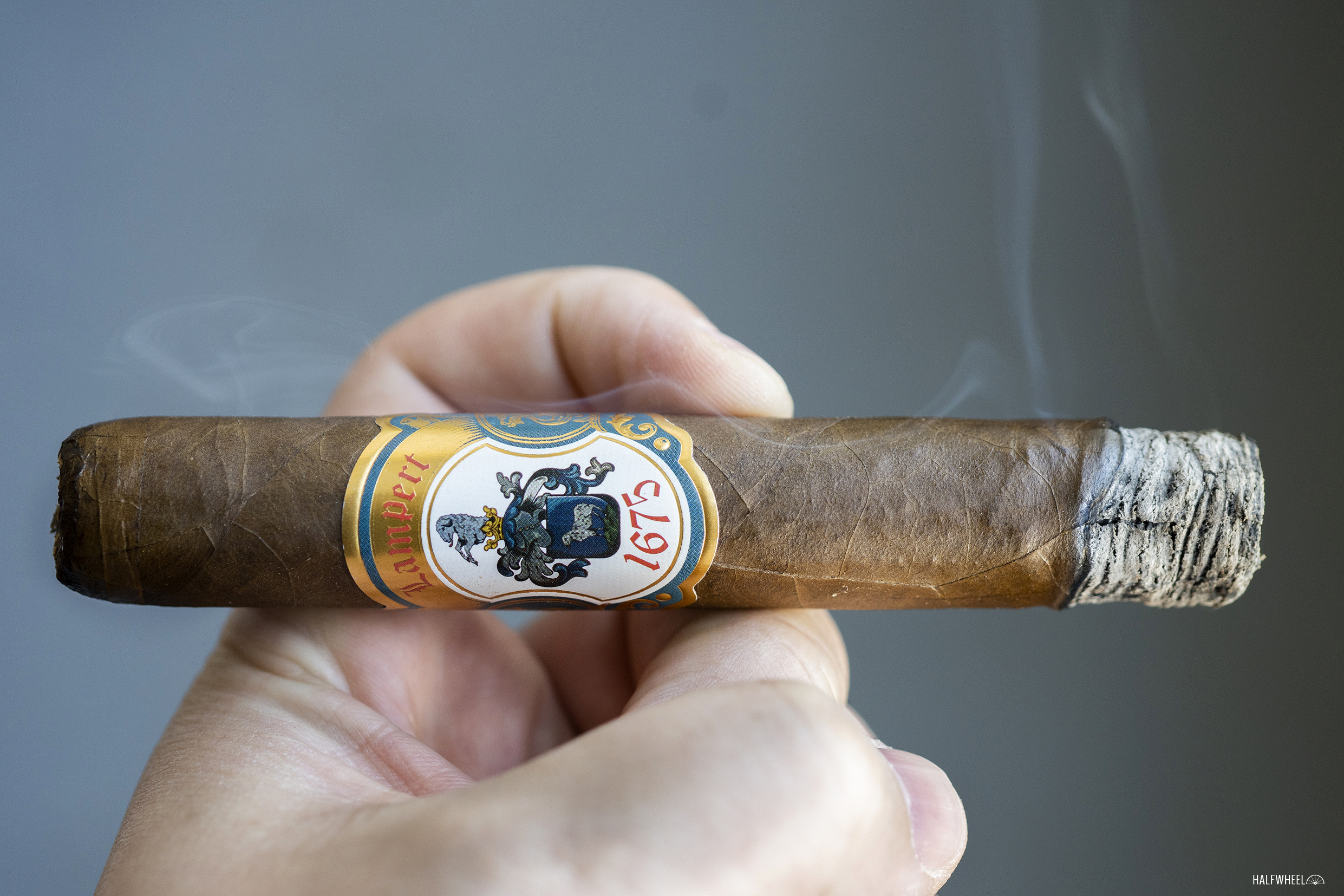 An entry for the lattermost category is Lampert Cigars, which entered the U.S. market in May. In 2016, Dr. Stefan Lampert launched his own cigar company with an idea called My Cigar Lab. His entry into the American market is a new line called Lampert 1675, which is made at Omar Ortez’s AgroIndustrial Nicaraguense de Tabacos S.A. in Condega, Nicaragua. It uses an Ecuadorian wrapper over a Nicaragua binder and fillers from Condega and Jalapa, Nicaragua as well as Peruvian ligero. Indiana Ortez is credited as the blender for this cigar.

The Lampert 1675 Edición AZUL debuted in three regular production sizes. It actually debuted in March in the country of Liechtenstein—where the company is based—and Switzerland before its arrival in the U.S. 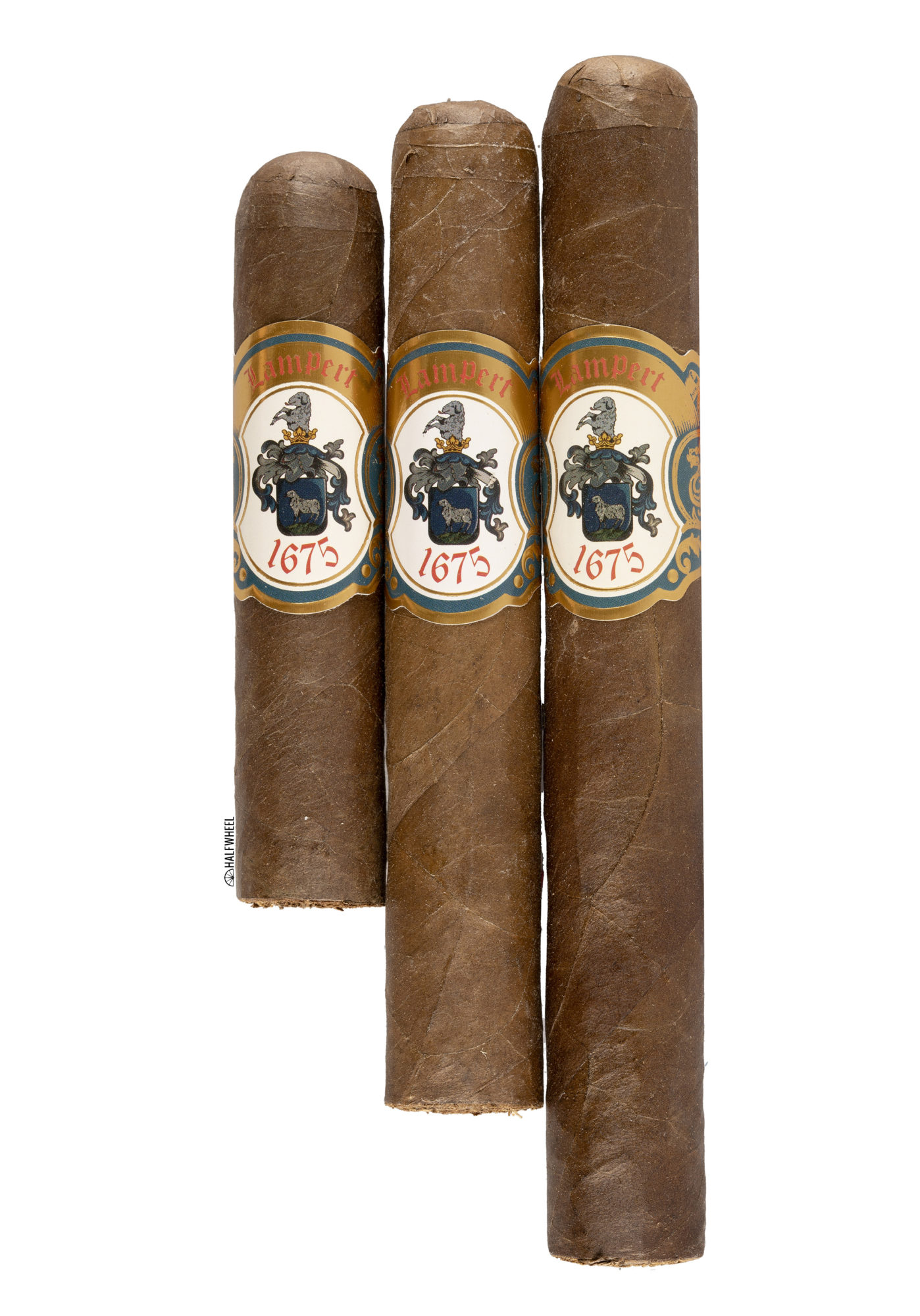 Lampert is being distributed in the U.S. by The Bespoke Company, the company behind Casdagli. 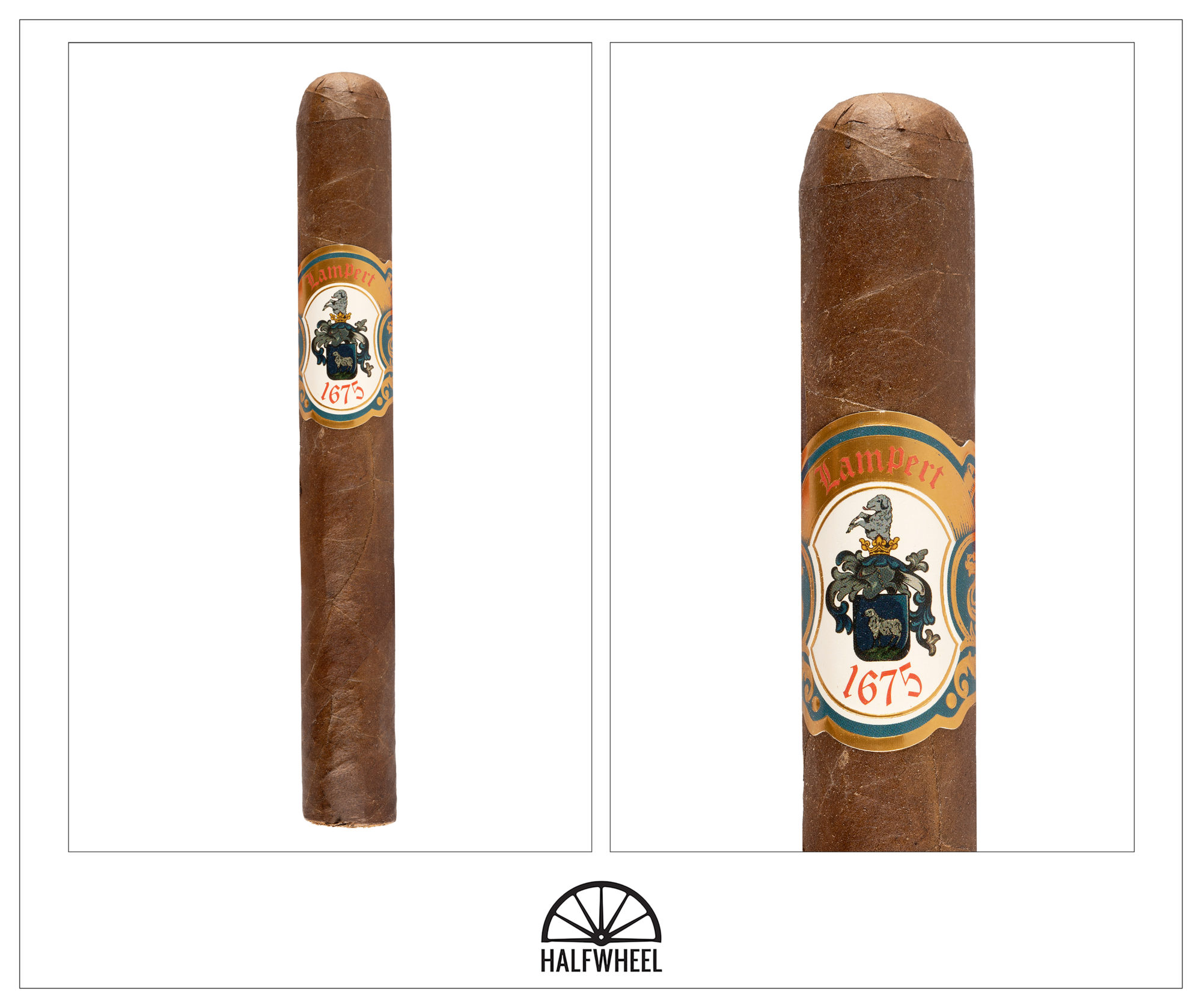 While the press photos we received showed a dark, almost purple-like wrapper, once in my hand the cigars have a muted dark brown color. I can see that the wrapper has a good amount of oil throughout and like the color, the oils are evenly dispersed. On each sample, the foot is a bit wider than the cap. It’s not a belicoso, but the feet seem to have expanded a bit. These weren’t shipped in cellophane, so I’m not surprised that there’s not that strong of an aroma: a medium-plus profile with an acidic leather scent. The foot is stronger and sweeter, there’s graham cracker, orange peels and an overall smell that reminds me of an old fashioned cocktail. The cold draw is still pretty sweet with grains, graham cracker and vanilla. One very odd development is that after a half dozen or so cold draws, I pick up a meatiness that reminds me of the powder that comes in dry ramen containers. Like the foot, I’d describe the intensity of the cold draw to be medium-full.

The Lampert 1675 Edición AZUL Robusto begins with nuttiness, creaminess and something that reminds me of an unripe banana, though like the flavor of a banana, it’s pretty subtle. One sample has some fire-cured notes and another one is noticeably sharper than the other two. Normally, this is the place where I’d describe how the flavors develop, but before the flavor changes, the ash falls off, at least on two cigars. It’s about as early as I’ve ever seen a cigar lose the first chunk of ash, one cigar takes less than 10 minutes before it just falls. Flavor-wise, there’s a mixture of peanut butter and waffle cones, though it’s not as sweet as that sounds. After an inch, there’s an uptick in cedar, which makes sense given its presence on the finish. To be honest, the only other thing I really taste on the finish besides cedar is some subtle sweetness and something that reminds me of vodka, albeit without the burn. Retrohales aren’t my favorite as it seems like when the smoke is in my mouth, everything just gets sharper and less clear. There’s cedar and some nuttiness, but neither are as vibrant as the main mouth flavor. Flavor is medium-full, body is mild-medium and strength is medium. Two samples seem to be burning quicker, while the final sample I smoke is burning much slower. Coincidentally, that’s the one cigar that managed to get a solid chunk of ash, the one you see photographed below. 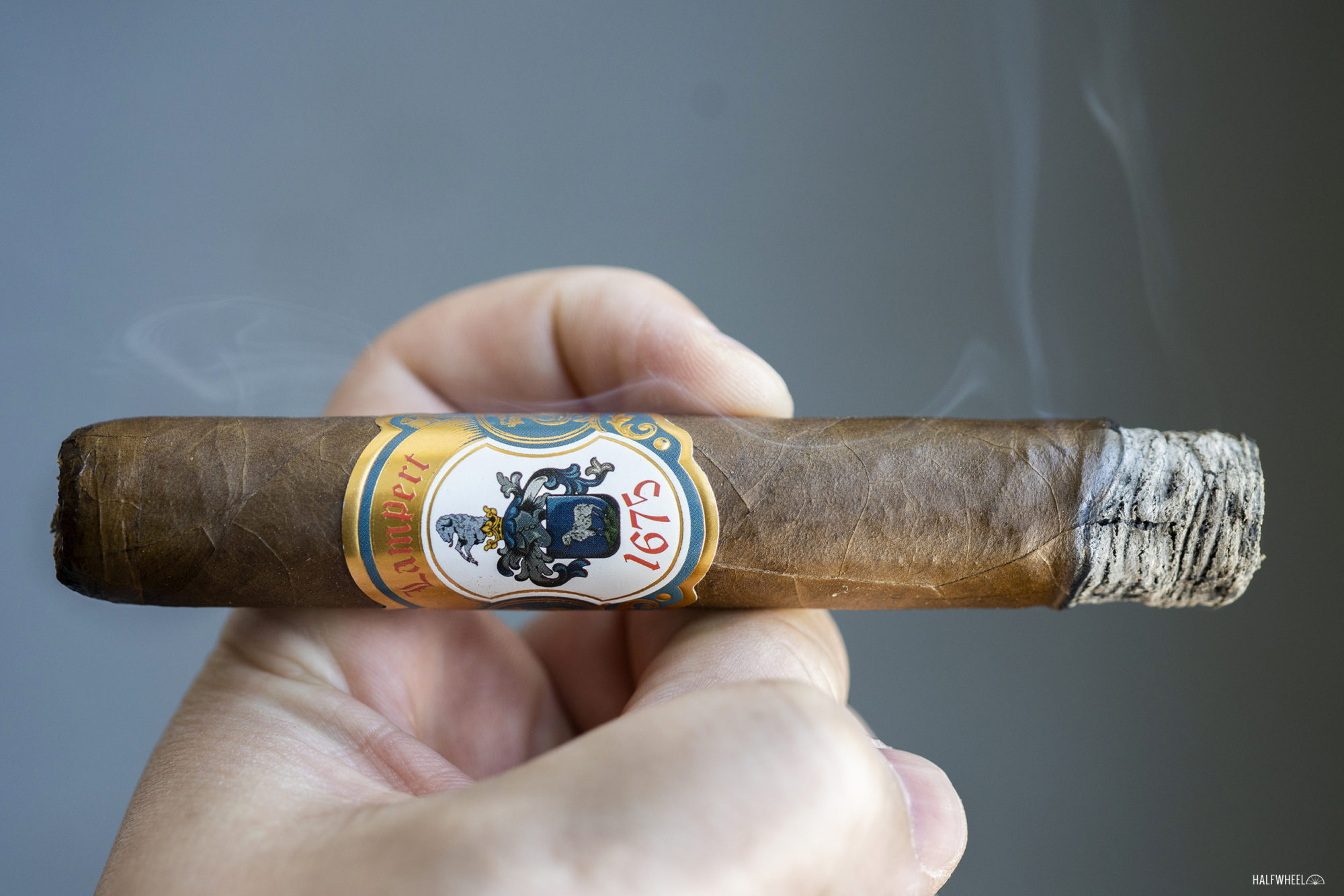 While the profile stays pretty consistent flavor-wise in the second third, there’s a noticeable shift in how clean the profile is from the first half to the second half. There’s a lot more nuttiness, joined by some cranberry and herbal flavors. The finish has mustard flavors, nuttiness and some more of the herbal flavors. Unfortunately, the retrohale is even sharper and I don’t think it’s helping the flavors make themselves easily identifiable as the increased irritation makes it even more challenging to detect what few flavor notes I’m able to pick up. Retrohales are drier with a very distinct barnyard contrasted with lavender, woodiness and fruitiness. While there are more flavors to be identified, the profile is quite funky and like the first third, retrohaling just seems to make things worse. Flavor is medium-full, body is medium and strength is medium. Each cigar needs at least one touch-up in the final third, two for deciding smoke production and one for a large chunk of wrapper that isn’t burning evenly. The final sample also sees the draw tighten quite a bit, which isn’t for the better. 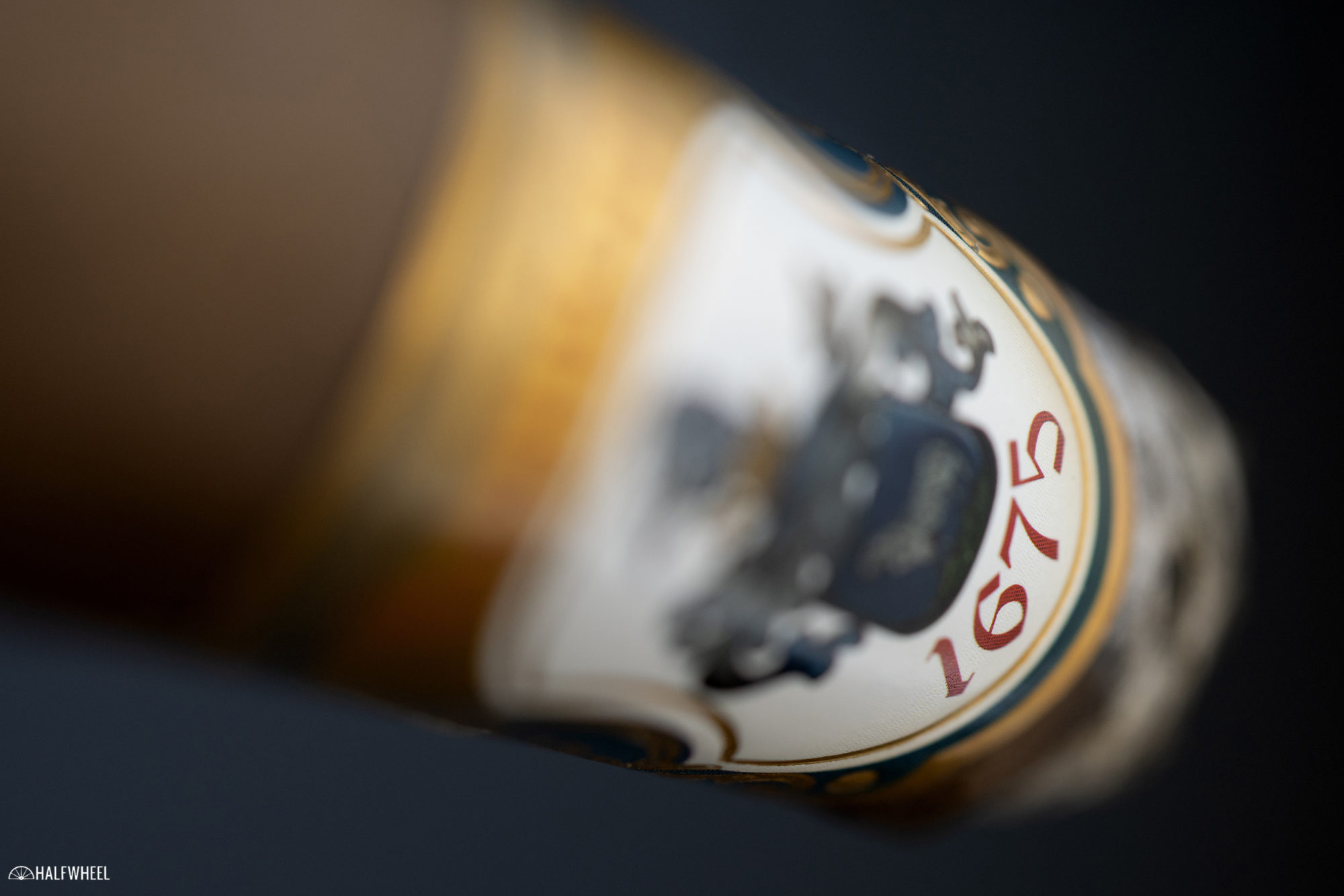 While the nuttiness is still present in the final third, the profile itself seems to be a shell of itself. The flavors just keep getting more compact and sharper at the same time, which isn’t great. There’s a weird flavor that reminds me of potato crisps, but it’s accented by a honey-like sweetness. I removed the band about an hour into the cigar—so well before the final third started— but I’m also tasting something that reminds of the flavor when I accidentally forget to remove the band and the paper starts burning. On each cigar, I look down and remember that there’s no paper left on the outside of the cigar. Retrohales are meatier than the main profile, joined by both the paper sensation and some sweet grapefruit. If you think that’s an odd flavor mixture—and I do—the retrohales finish with something that reminds of bread, paper and sweet pineapple. Flavor is medium-full, body is medium-plus and strength is medium-plus. All three Lampert 1675s require more touch-ups in the final third and not surprisingly, the tight draw on the one sample doesn’t get better. While it was neither planned nor caused by anything, I actually went five days without smoking a cigar. Non-review work has been quite busy at the moment and I just couldn’t find the time to smoke a cigar. My first two cigars after that five-day hiatus were Lampert 1675 Edición AZULs on back-to-back days. My palate was incredibly well-rested and I could sense that on that first sample. That’s why it’s not only alarming how few flavors I was able to pick up but also the oddity of the flavors. In case you thought my palate sort of uncalibrated itself during that break, the flavor notes between the three cigars—smoked over the course of four different days—were remarkably consistent. I’ve smoked very good cigars from Omar Ortez’s factory, this just isn’t one of them. Perhaps with time, more flavors develop, but for now, I'll turn my attention to one of the other Lampert offerings.