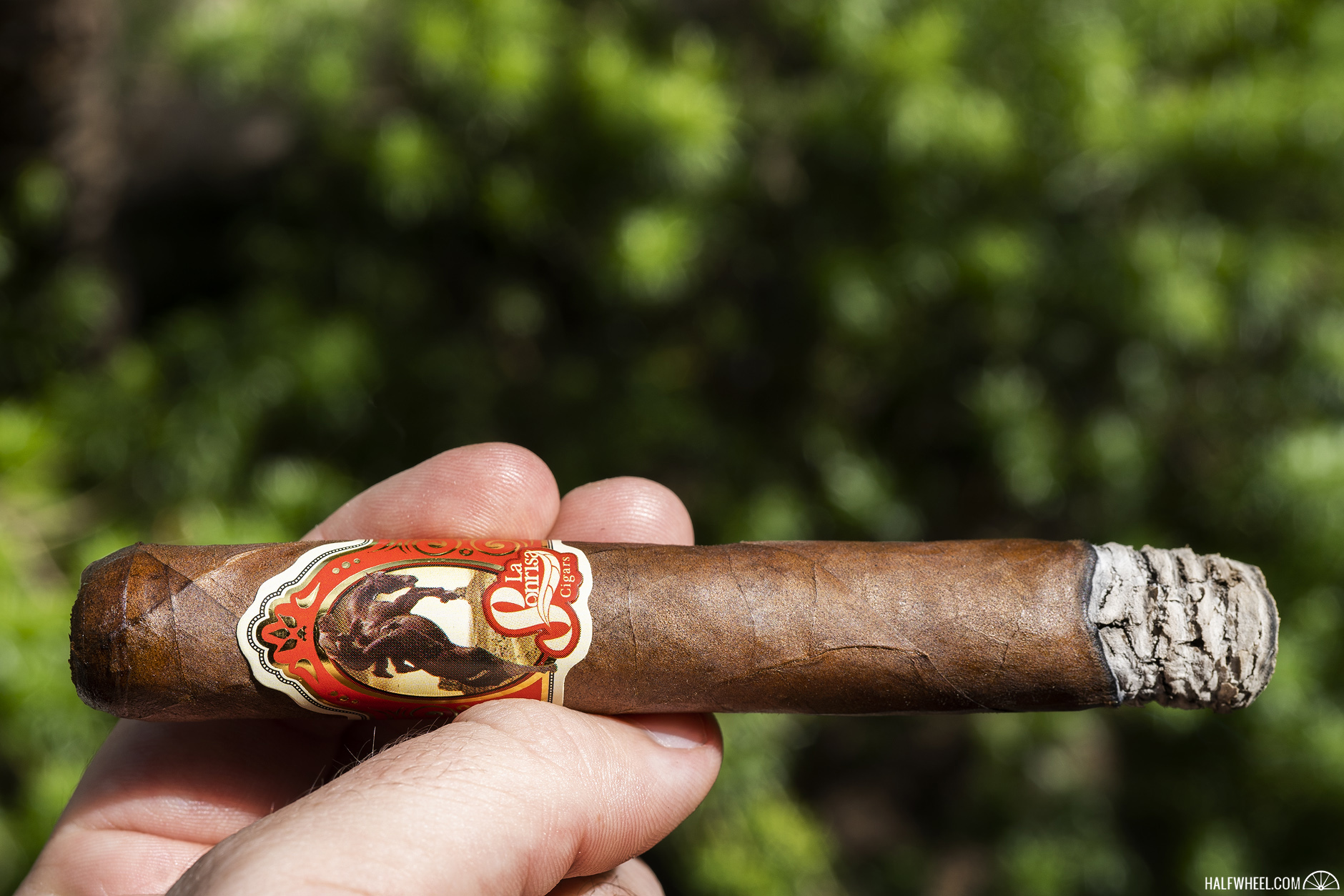 This summer, La Sonrisa Cigars once again paid tribute to one of its co-founders with a cigar named for him, the Domador.

It’s the third cigar named in honor of Wally Stealey, who passed away in October 2017. Joining El Profesor and The Wally, this cigar is a nod to Stealey’s youth and cowboy background, as domador means tamer  or braker in Spanish, and is used in reference to those who tame horses. Stealey grew up in Colorado learning how to do just that, and a picture of an 18-year-old Wally Stealey on the back of a yet-tamed horse is the centerpiece of the cigar’s primary band.

“Our company’s tradition is to have our cigars carry on the characteristics of their namesake,” said Tom Hocking, the company’s co-founder, in a press release. “Wally was always larger than life and had an influence on everyone he met from rural farmers to Wall Street bankers. I expect the Domador to have that same broad attraction.”

The cigar is a 6 x 52 toro that wears a Mexican San Andrés wrapper on top of an Indonesian binder and fillers from Nicaragua’s Jalapa and Estelí regions. It was blended by Silvio David Martinez at the La Sonrisa Cigars S.A. factory in Granada, Nicaragua, with the cigars rolled in the summer of 2018 meaning they were shipped with just over a year of rest on them.

It’s also a limited edition, at least for the time being, with just 2,500 cigars produced. The first La Sonrisa Domador that I pull out has a wrapper with a fair number of veins, and their arrangement prevents the seams from laying perfectly flat in a few places. It’s a shade of brown that is earthy and just darker than medium, more towards the matte side but with a bit of oil hanging on for some sheen. Color-wise, it would seemingly right at home among the bulk coffee beans in a grocery store, with lighter shades closer to a dark almond. It’s a fairly beefy cigar and when looked at closely, and there is the occasional bump in the roll that take away from it being perfectly cylindrical. It does feel fairly well-rolled and is uniformly firm, so concern is minimal about the construction at this point. The foot has an aroma that is surprisingly light, sweet and pungent by way of cherry pie filling and what strikes me as apple cider vinegar though without the distinct sting, grounded by a bit of damp earth and brownie batter. The cold draw is nearly spot-on in terms of airflow, while the flavor is a thin, dry wood with a bit of cedar sweetness at times. When it does miss, it’s on the tight side.

The first puffs of the La Sonrisa Domador are very clean and clear on the palate with a mix of white and black pepper brightening up suggestion of an earthy core, which get confirmed by the first retrohale as it is noticeably fuller than what the palate gets.The flavor stays fairly consistent through the first inch or so, and while not the most complex, it is balanced, clean and enjoyable. After knocking off the ash around the one inch mark, retrohales shift to being a bit more white-pepper dominant, and it appears the flavor may be starting to evolve a bit as well. It turns out to be not as big of change as I might have suspected, but by the end of the first third the cigar is producing a thicker, creamier smoke, with the creaminess carrying over to the profile as whatever earthiness the cigar had gets overshadowed. The draw, burn and smoke production have all been very good, while the flavor and body both sit right around the medium mark.

The second third of the La Sonrisa Domador doesn’t see much change from the first third, other than to say that the profile feels a bit lighter than it did earlier, though the change is very subtle. There are a few points in one cigar where the creamy sweetness thickens into almost that of condensed milk, an interesting juxtaposition to the simultaneously building rocky earth. It’s the most polarizing of the three samples, yet almost strangely the most enjoyable as while it teeters it doesn’t lose balance. While all three cigars have similar first thirds, the second third is where their paths diverge just a bit, with the second the most subdued of the three and almost going into a slumber. The back half of the second third sees the first touches of any harshness, with a sporadic bit of sting hitting the back and upper portions of the throat. Thankfully it is fairly minor and fleeting, and is the harbinger of a fairly drastic change to the profile as the Domador sheds almost all of its sweetness to move to a robust, earth-forward flavor. It feels like a fully developed version of what the cigar was offering in the first third, and while the sweetness is missed, this new profile stands solidly on its own. The draw, burn and smoke production have all been quite good, and only one sample has needed any sort of attention, which I’m likely to blame myself for more than the cigar. Seeing as the how the second third has a defined transition, the start of the final third of the Domador is continuation of that, a different profile than what I had been experiencing but one that brings about its own style of enjoyment. While it might be a bit rocky and earth-forward for some, it straddles the line pretty well for my preferences. The final inch-plus of the Domador see a very welcomed return to some aspects of the first third, though now a bit fuller and easily the fullest the cigar has been, sitting at an enjoyable medium-full. There’s a flavor that sits between well-roasted and over-roasted coffee beans and brings the earthiness to life, while just a bit of pepper sits on the palate on the finish. It brings about more heat and just a bit of a chalky finish, a sign that the cigar is ready to be put down after a very enjoyable experience free of technical issues and finishing at the medium-plus mark in terms of flavor and strength. Consider me very pleasantly surprised by the La Sonrisa Domador, a cigar that is definitely a step forward for this small brand and its blender. The most standout thing about the Domador may be the big transition between the flavor profile in the first and second halves, and while that is impressive, what most impressed me was that it was able to pull both off with seeming ease. Other than a handful of spots, the cigar never got too far out of balance, staying on the rails while taking a couple of curves and rerouting into a markedly different direction. The draw, burn and smoke production were all very good and outside of one spot my lighter was never needed for a touch-up. La Sonrisa has been an interesting company to see develop and grow in the past few years; hopefully this is a cigar that helps it take that next step, as it is certainly worth trying at least once.