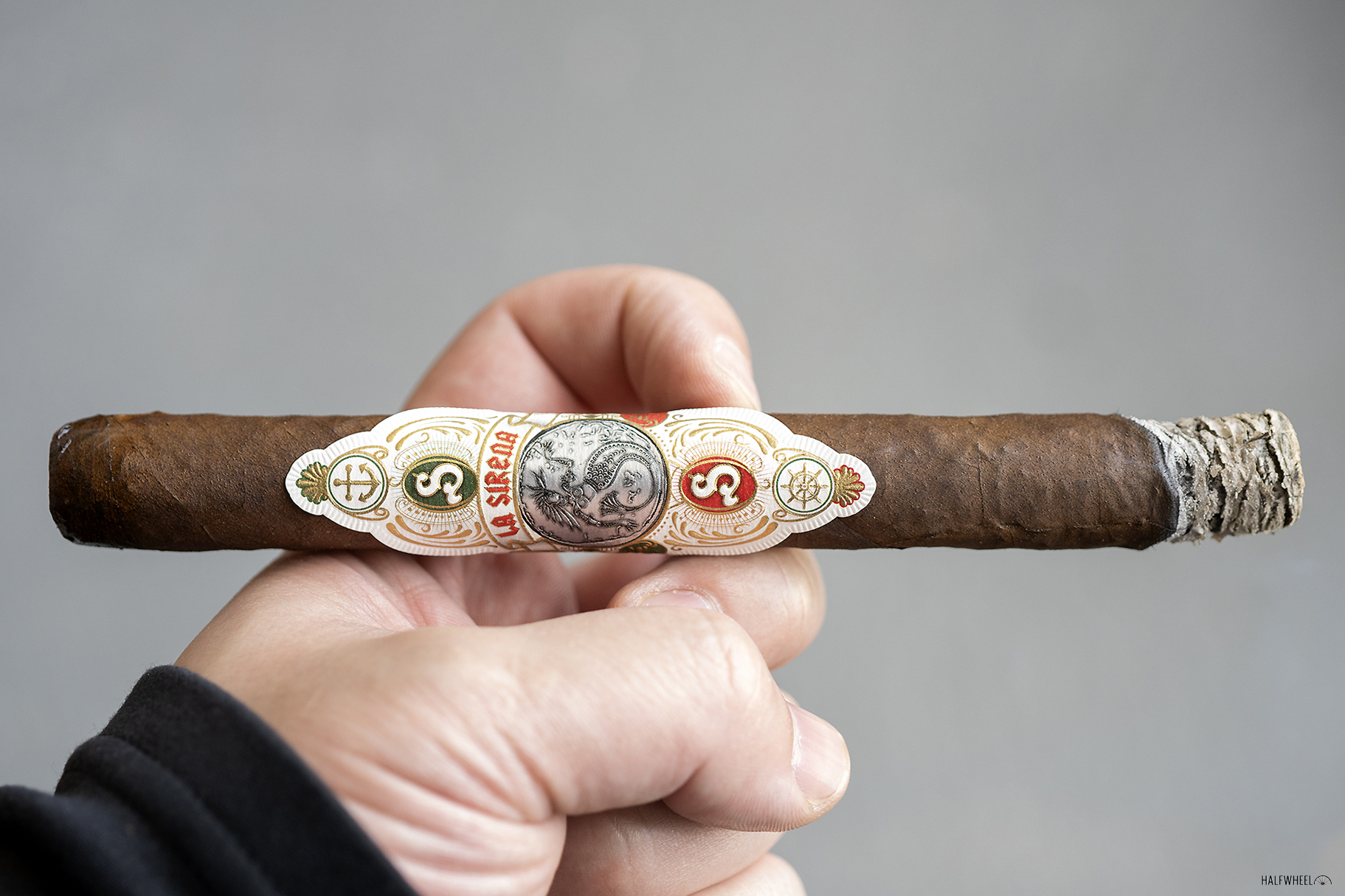 In 2019, La Sirena celebrated its 10th anniversary with a cigar called the La Sirena Aniversario Especial. It was released in a single 5 3/4 x 54 robusto extra size and limited to just 1,000 cigars, though those wouldn’t be the two things I find most interesting about that cigar. First, it used a blend that included Mexican tobacco for the wrapper, binder and some of the filler; second, the cigar lacked La Sirena’s massive bands that I’ve come to associate with the brand since it launched in 2009.

As for why it’s called Mexican Mermaid, it’s likely due in part to using Mexican tobacco for the wrapper, binder and part of the filler. Of note, the blends are not identical on paper, as the Mexican Mermaid uses Dominican and Mexican tobaccos for the filler, while the Aniversario Especial had a quartet of countries represented that also included Brazil and Nicaragua.

The Mexican Mermaid is offered in four sizes: 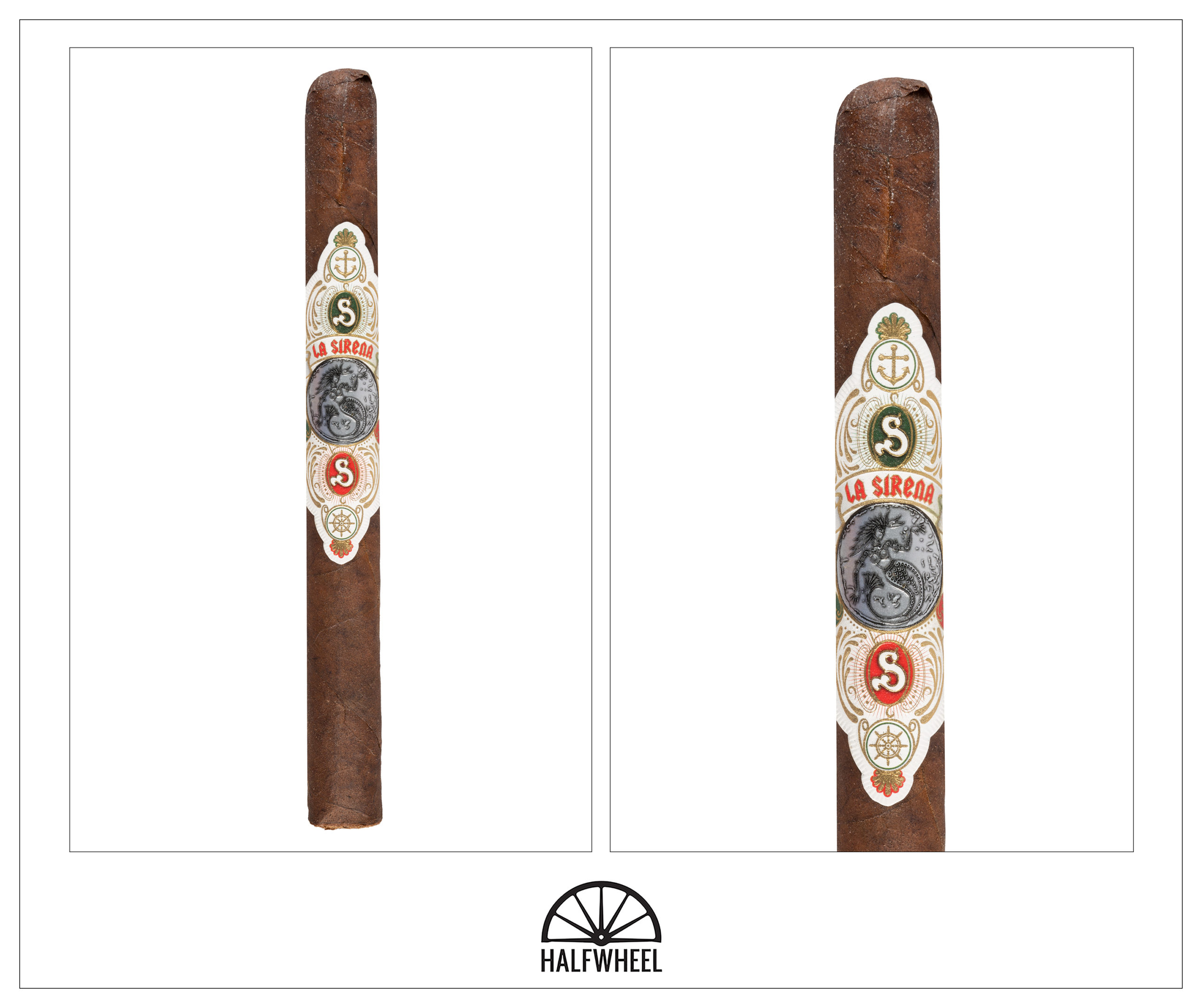 When La Sirena debuted as company, I remember being surprised that it decided to create bands as large as it did for cigars. Nowadays, these bands are still large, but not as jarring as they once were, but because it’s not a full cylinder, these bands still look as unique as they did when I first saw them.While this might not be the best use of paper, they do serve a purpose. If you can’t remember the name “La Sirena” but are ever in a cigar shop trying to find a cigar, you can always just ask for “that one with the huge bands” and you’ll be likely to eventually get pointed in the right direction. As for this band, there are a number of nautical-themed details on it but my favorite parts are a bit more subtle: the pewter-colored logo and the contrasting red and green backgrounds behind the “S” characters on top and bottom. The other great part about this band is the white background, which contrasts well against the reddish-brown wrapper. While you can’t tell in the pictures, the cigar is extremely bumpy to the touch and quite firm when I squeeze it. Of the five cigars we purchased, two of them have caps that aren’t entirely flush, something that is obvious in the picture above. The aroma from the wrapper is medium-full with a crisp earthiness and something that reminds me of the scent of fire-cured tobacco. There’s some weird herbal flavor—at times it’s like a green licorice—along with a chocolate that comes across like spoiled chocolate milk. The cold draws are quite tight and, quite frankly, not the best tasting. There’s raisins, something akin to rotten melon, cocoa, acidity and some general foulness. It’s not rancid, but the foul flavor is off-putting enough that I’m not all that interested in trying to take much time figuring out what exactly it is.

Fortunately, the La Sirena Mexican Mermaid Lancero starts off a lot better than the cold draw. The draw’s tightness is better and the flavor is much improved. There’s lots of vibrant cedar, toastiness, some sweetness and a bit of a sharpness. To some degree, it reminds me of Liga Privada No. 9 from back in the day. While the comparisons to Liga Privada wear off after a few minutes, the vibrant cedar does not. It’s joined by some precise white pepper, a honey-like sweetness and some peanut-like nuttiness underneath. Cedar remains the leading flavor during the finish with earthiness, walnuts, creaminess and minor amounts of both bitterness and floral sweetness joining the mixture as well. Retrohales are led by a mixture of nuttiness over earthiness, leather and white pepper. Because of both a lack of creaminess and some touches of toastiness, retrohales seem to have a bit darker of a profile than the main flavor. The finish is a bit sweeter but nuttiness remains the leading flavor; at times, I find interesting accent flavors including brown mustard and sesame seeds. Flavor is full, body is medium and strength is medium. The draw is a bit tight, but outside of a slow burn, that doesn’t seem to be affecting the cigar. Smoke production is great and the burn is remarkably even.

Before the first third finishes, the giant main band needs to be removed, revealing the smaller secondary band that La Sirena includes. As for the performance of the cigar, the La Sirena Mexican Mermaid Lancero gets both earthier and saltier in the second third. Some of that is due to increased amounts of earthiness and saltiness, but I think some of it is caused by a reduction in creaminess. Beyond that, I taste a generic meatiness and touches of minerals. What’s surprising is how much of a backseat both the cedar and nutty flavors have taken, though both are still present as secondary, maybe even tertiary flavors. Once the smoke leaves my mouth, there’s a Nila wafer-like sweetness, white pepper, saltiness, dry creaminess and leather. Retrohales have a brighter red pepper flavor that sits atop some generic white bread and leather. After retrohaling, there’s a semi-sweet graham cracker-like flavor, black tea and some herbal sensations. Flavor is full, body is medium-full and strength is medium-plus. Construction remains fine during the second third, though there are some stretches where the smoke production wanes. Fortunately, increasing the puff rate temporarily fixes the issue each time and then I can settle back into a more comfortable rhythm. 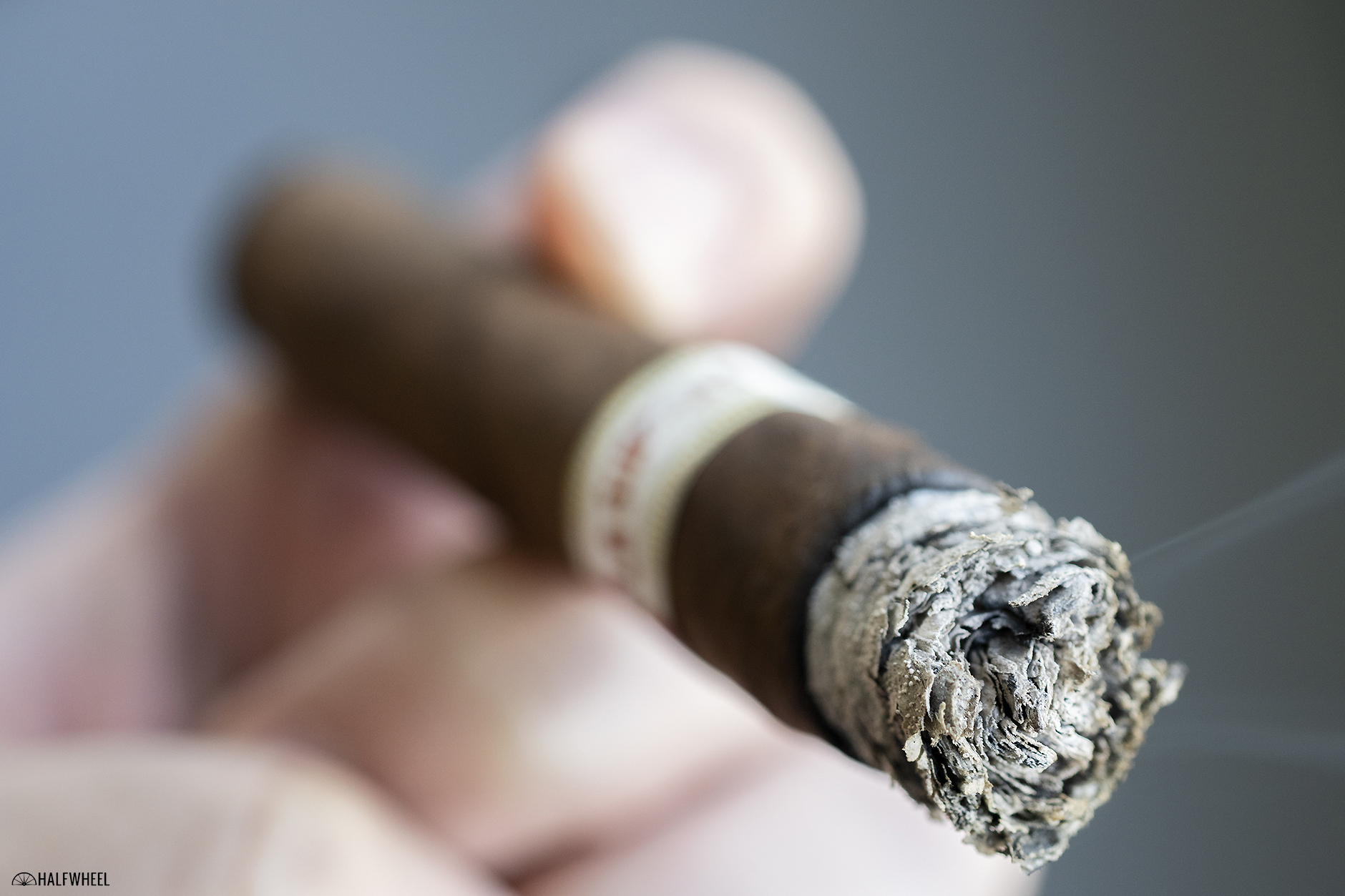 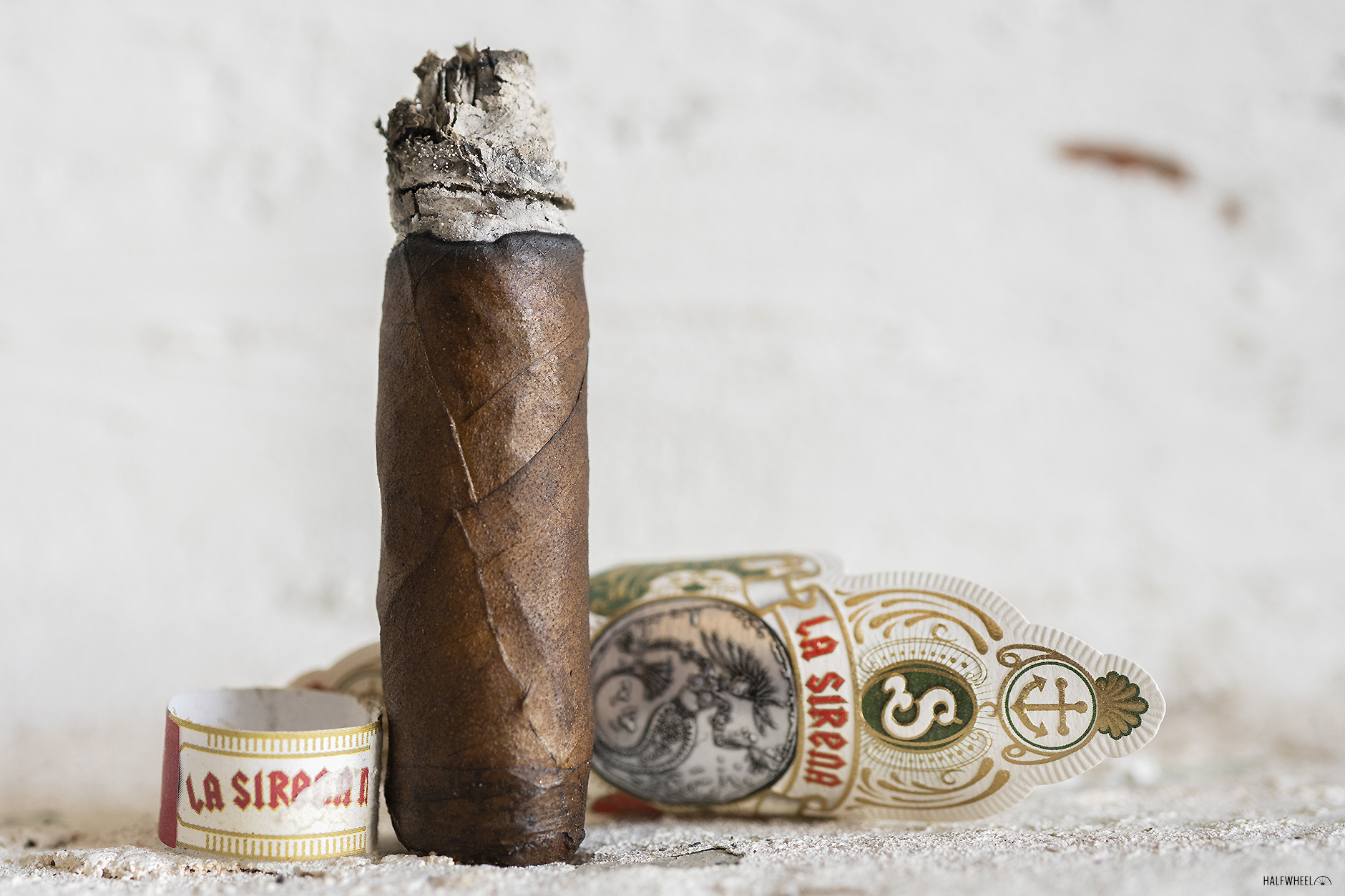 I recently reviewed the Chogüí Dos77 Corojo Rogusto and used this part of the review to ponder what my thoughts would be like if the cigar’s flavor progression was reversed in order. That cigar started off poor and finished a lot better. I want to be clear, the La Sirena Mexican Mermaid Lanceros' worst point was much better than the Chogüí’s first third, but I can’t help but think how much of a factor the ordering plays into my overall thoughts about the La Sirena Mexican Mermaid Lancero. The first third was excellent, the second third was good and the final third was fine but boring. However, because the best part was upfront, I didn’t have to wait—and in this case, that would have meant waiting more than two hours with my epically slow smoking pace—for the cigar to get good, and quite frankly, for the cigar to get great, as this is the best La Sirena I’ve smoked to date.