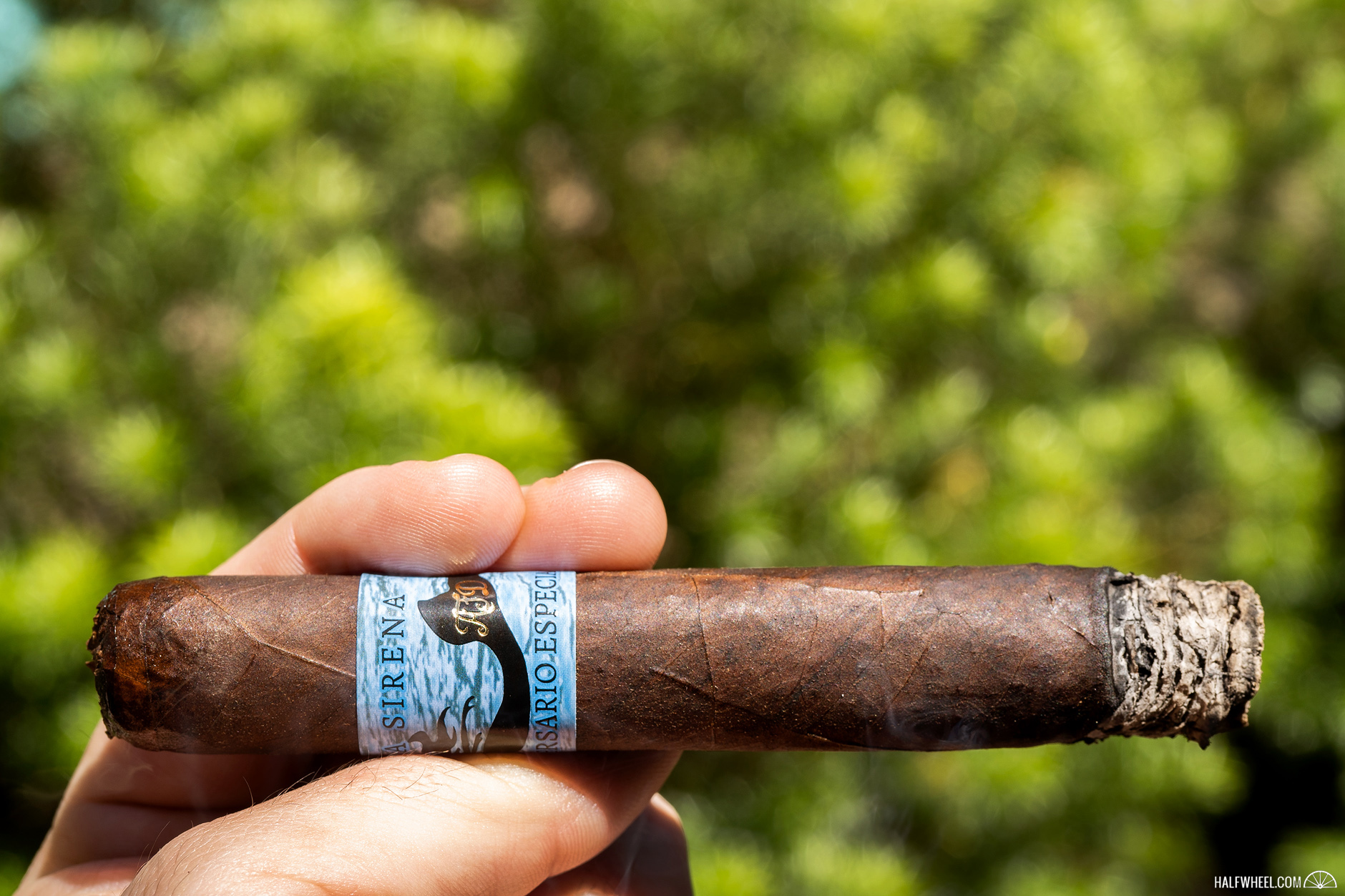 In celebration of its 10th anniversary, La Sirena not only released a limited edition cigar, but it turned to a new factory for the brand.

The cigar is the La Sirena Aniversario Especial, a 5 3/4 x 54 robusto that is quite limited—at least in its initial release—with just 100 boxes of 10 cigars produced. It uses a 10-year-old Mexican San Andrés wrapper grown by the Turrent family, with a Mexican criollo 98 binder grown in the San Andrés valley as well and fillers from Mexico, Brazil, Nicaragua and the Dominican Republic.

The factory that produced it is Nueva Matacapan de Tabacos S.A. de C.V. in San Andrés, Mexico. It joins a list of factories that have produced cigars for the brand, starting with La Zona Cigar Factory in Estelí, Nicaragua; La Aurora in Santiago, Dominican Republic; El Paraiso in Danlí, Honduras; and Quesada Cigars, also in Santiago, Dominican Republic. Additionally, the My Father Cigars S.A. factory produced some of the first La Sirena offerings, though no longer does so. For those not familiar with the La Sirena brand, it is the creation of Arielle Ditkowich—now Mogil—and her father Danny, founded in 2009 with the first cigars released between late 2010 and early 2011 as part of a partnership between the Ditkowich family and Miami Cigar & Co. The brand became known for its mermaid imagery, with Arielle assuming that role and often donning a mermaid’s tail for promotional images. Since that time, she has stepped away from being the face of the company, with her younger sister, Mariah, and Danny taking on more of those responsibilities. In addition, if you’ve visited the company’s booth at recent IPCPR Convention & Trade Shows, you’ve likely met Arielle’s mom, Karen.

Beyond this limited edition, the company offers several regular production lines, including the La Sirena Original, Original LT, Merlion, Merlion Maduro, Oceano and Porthole. At the end of 2018, the brand added a new collection of small cigars in tins, traditional blends in the La Sirena Connecticut and La Sirena Cameroon as well as a trio of flavored cigars: the La Sirena Vanilla, La Sirena Cherry and La Sirena Chocolate.

The cigar got a soft launch at Tobacco Plaza in Great Neck, N.Y., the store owned by Danny Ditkowich, before being shipped to La Sirena accounts across the country in June. While initial production is limited, Ditkowich told halfwheel that the brand could produce about 100 more boxes, but so far has yet to do so. The La Sirena Aniversario Especial sports a very dark, chocolate brown wrapper, and while not designated as a maduro or oscuro, would certainly qualified for that designation. The vein structure catches my eye, as while the wrapper is a very even color, there is just enough difference to see a network of smaller veins originating from the more prominent ones, and while I wouldn’t use it to give a detailed explanation of the structure of a tobacco leaf, it does a better job than many cigars. The cigar is firm when squeezed and a bit of handling better reveals the slight box press that the cigar gets, more an oval shape as opposed to sharp corners, especially when viewed from the foot or the head. The wrapper’s texture sits right on the line between a bit dry and a bit oily; there’s a bit to be found but not enough to completely gloss over the leaf’s texture, even though the leaf has more of a matte finish. The foot of the cigar is slightly sweet, calling to mind cherry pie or a cherry compote, finished off by a bit of black pepper, with some samples adding a dry tobacco sensation that mimics the texture of dry tobacco leaves. The cold draw is a bit loose but not concerning, offering subdued flavors of chocolate before picking up some coffee notes which in turn leads me to think of a mocha, with occasional creaminess furthering that comparison. There’s little if any pepper to be found here, as the three samples share just a sprinkling of peppery tingle among them.

The La Sirena Aniversario Especial starts off with a crisp, dry flavor profile, giving the tip of the tongue a bit of black pepper while a thin earthiness gets more prominent towards the back of the tongue. It’s not long into the cigar that the profile shows a robust rockiness, a solid expression of the terroir from which the tobacco comes though one that I could see some palates finding too close to being irritating. Through the first inch across the three samples, I find the cigars approaching but never quite hitting the sweet spot in terms of how much of the terroir they deliver. One goes a bit heavy with it, one goes a bit light which allows white pepper to drive much of the profile, and the third leans more pepper-forward but does a better job balancing the two. It’s an enjoyable profile on my palate, which has developed a fondness for San Andrés tobacco, though I do find myself wanting more out of the cigar in terms of depth and complexity in the early goings. To do that, I find myself retrohaling a good amount, which brings on a light, fruity sweetness at times to complement the white pepper that is the most prevalent component of the smoke. The draw, smoke production and burn are all fantastic, with hardly any issues to be found.

When smoking cigars, I tend to think of how the intensity of flavors and strength would be represented on a timeline, whether it be a straight line or the peaks and valleys of a sine wave. The La Sirena started things right around the middle mark, climbed up a few notches, then dipped in the first third and carried that dip over into the start of the second third. There are some points in the start of the second third where I’m a bit surprised I’m not getting more from the cigar, but as those thoughts develop the line starts to turn back upwards, with the dry earth the first to intensify and black pepper following not long after. There’s not much in the way of sweetness, something I find myself expecting from the cigar, and while it’s missed it’s not a complete detriment to the profile. The back half of the second third sees the earthiness get a bit rougher on the palate, combining with the black pepper and a new red chili pepper flake that is more sensation than flavor. One sample’s burn line goes wildly awry in the second third, so much so that I give the offending side a touch-up in hopes of spurring it on and catching up with the other side. The draw and smoke production are still very good, the former a touch open if anything and the latter more than sufficient. The start of the final third of the La Sirena Aniversario Especial brings on some nicotine strength, pushing that line up to its highest point so far, while the flavor intensity is still peaking but doesn’t seem like it’s going to go much farther as the ramping up has slowed since the midway point. One of the three samples does a good job answering my request for sweetness, delivering a Hershey’s chocolate syrup note as the band comes off, something I would have loved to see in the other two but wasn’t fortunate enough to find. The earth note picks up a bit of chalk that turns into a bit of peppermint not that unlike an Altoids mint, especially in terms of how the flavor now sits on the tongue. There’s plenty of smoke from the cigar, probably the most it has put off to this point, while the burn line is good but does struggle to stay even in one sample. The La Sirena Aniversario Especial finishes a bit on the rough and hot side, with subsequent puffs stinging the tongue a bit more as the burn line draws close to the head of the cigar, though slower puffing keeps things in check—more or less—and allows the white pepper to be the biggest influence. The draw and burn on two of the cigars are both quite good, while the one with burn issues manages to get things evened out with a few touch-ups. Anniversary cigars inherently come with lofty expectations and for good reasons. But beyond that, in the case of the La Sirena Aniversario Especial, I was intrigued to see what the Turrent factory would be able to produce for the La Sirena brand as well as what a decade-old San Andrés negro leaf would offer to the blend. That's all before looking at the interesting combination of filler tobaccos that the cigar offers as well. The result is a cigar that holds onto much of the earthiness and pepper while seeming shedding the lighter notes that give it nuance, depth and complexity. While I wouldn't say that the tobacco is past its prime, it does offer a new take on Mexican San Andrés leaf that I can't say I've experienced before, and I'm not quite sure just how much the filler is able to fill in those gaps. The first two thirds of the cigar are where it shines brightest, and save for a chocolate syrup in the final third of one sample, that section didn't do much to impress me, consistently scoring as the lowest portion of each of the three samples due to the increased heat and subsequent sharpness of the flavors. While I have some issues with the La Sirena Aniversario Especial, it still manages to deliver an overall enjoyable experience marked by a robust profile with a good amount of pepper and Mexican terroir.