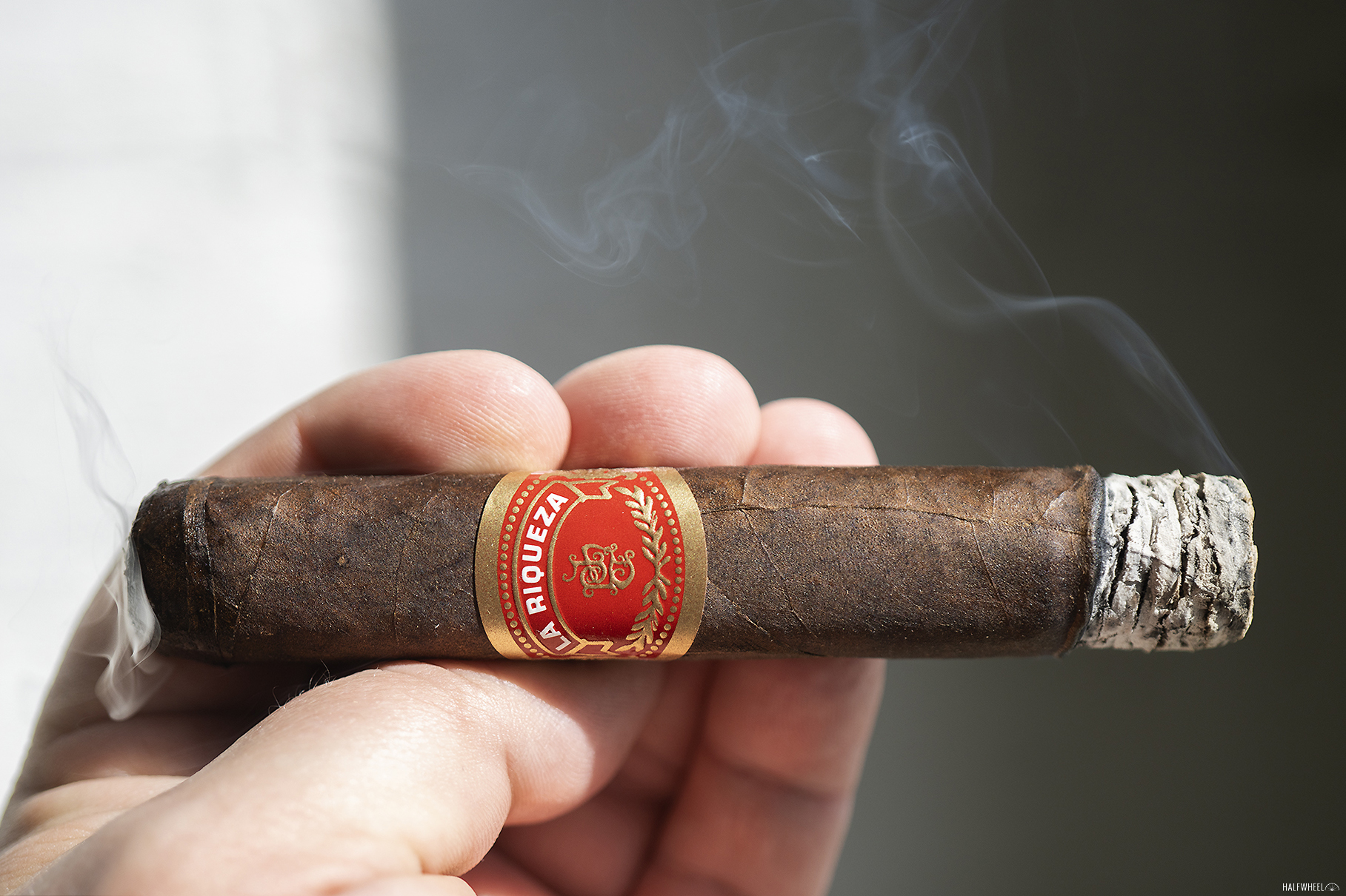 In 2008, Tatuaje Cigars introduced a new brand named La Riqueza, which translates to The Wealth from Spanish. The line eventually grew to include 13 different vitolas—in both box-pressed sizes as well as rounder cigars sold under the Cabinet name—all made with the same blend: a Connecticut broadleaf wrapper covering both a binder and filler tobaccos from Nicaragua.

Nine years later—in 2017—Tatuaje removed La Riqueza from its price list and informed retailers that the cigars would not be regularly offered, nor would the company be stocking them at the company’s Los Angeles office. While the move was an attempt to cut down on the number of SKUs that Tatuaje was offering at the time, the company made it clear in an email to retailers that the line was not being formally discontinued and that “they will still be available in the marketplace as small batch releases and at special events.” Not much was heard from the line until last year when Tatuaje announced a brand new vitola would be shown off during the 2021 PCA Convention & Trade Show in July. That cigar turned out to be the La Riqueza SE 2022, a 5 5/8 x 54 parejo with a covered foot packaged in boxes of 10. The La Riqueza SE uses the same basic components as the original La Riqueza—a Connecticut broadleaf wrapper over a Nicaraguan double binder and Nicaraguan fillers—but Tatuaje indicated that tweaks have made the blend slightly stronger compared to the original releases.

The total production of the new cigar was based on the number of orders received for it during the trade show and ended up being a total of 4,500 boxes of 10 cigars, with each cigar carrying an MSRP of $12. As with the original cigars, the La Riqueza SE was rolled at the My Father Cigars S.A. factory in Nicaragua, and boxes began shipping to retailers in mid-March. I absolutely love the overall look of the La Riqueza SE as I pull it out of the cellophane: the highlight is a deep, dark brown espresso wrapper that is parchment rough to the touch, but the obvious box-press and covered foot are also nice visual touches. In addition, while there is almost no oil visible, a number of smaller veins run up down its length and the cigar has quite a bit of firmness when squeezed. The aromas coming from that gorgeous wrapper are fairly pedestrian, a combination of leather, earth, hay, manure and generic wood. The foot is another matter, as strong notes of cedar and nuts combine with less obvious barnyard, toast, gritty earth, varnish, maple and black pepper. Finally, a straight cut reveals a cold draw full of cedar and coffee, as well as dark chocolate, almonds, hay, potato chips, pepper, leather tack and more maple sweetness.

A combination of black pepper and ground coffee greets me after I light the foot of the Tatuaje, and while the black pepper slowly recedes, the ground coffee remains one of the top flavors. About eight puffs in, a distinct earth note joins in followed by cedar, leather, cinnamon, chalk and slight cloves. More black pepper and sweet dates are present on the retrohale, and while there is also a bit of spice on my tongue, it becomes less and less noticeable as the first third burns down. Flavor is a sold medium, body is at mild plus and the strength level is just under medium but increasing. Construction-wise, the smoke production is massive off of the foot and the draws are excellent after simple straight cuts, and while one sample did need a quick correction, it was a fairly minor affair.

Earth and coffee grounds continue to top the profile of the La Riqueza SE in the second third—although in comparison to the first third, there is more of the former than the latter—while secondary flavors include potato chips, powdery cocoa nibs, cinnamon, cedar, leather and light citrus peel. A mineral saltiness has shown up on my lips in two of the samples, while all three cigars still feature some light spice on my tongue as well as quite a bit of black pepper and sweet dates on the retrohale. Flavor has increased slightly to a point just over medium, while the body and strength both end up at a solid medium. Both the smoke production and draw continue to give me no issues whatsoever, and while the cigar that had an issue in the first third evens up nicely, another sample runs into enough problems that I am forced to do a quick touch up just as the second third comes to an end. The spice that was present on my tongue for the first two thirds disappears totally by the time the final third of the Tatuaje begins, but that is not the only change in the cigar. The ground coffee flavor has been replaced by a cocoa nibs note, which it joins the earthy flavor at the top of the profile. In addition, secondary notes of cinnamon, creamy cedar, saltine crackers, citrus peel, baker’s spices and toast flit in and out at various points. However, one of the biggest changes compared to the previous two thirds is the black pepper on the retrohale, which increases so much that it almost completely drowns out the sweet date note, leading to an obvious imbalance in the profile. Flavor remains at a point just over medium, but both the body and strength bump up to medium-plus, where they remain until the end of the cigar. Finally, there is a copious amount of smoke flowing from the foot and the draw on all three cigars remains excellent, but one sample needs a couple of quick corrections with my lighter to get it back on track before I put the nub down with a little less than an inch remaining. As a blend, the La Riqueza SE has quite a bit going for it: main flavors of ground espresso beans and gritty earth are joined by some cocoa nibs notes and mineral saltiness in the second half, while the retrohale features a large amount of black pepper and light date sweetness. Unfortunately, those main flavors are so dominant in the profile that they overwhelm just about any other note, and there is so much black pepper—especially in the final third—that the date sweetness never has a chance to have more than a passing effect. Make no mistake, this is an enjoyable cigar if you are a fan of earth and black pepper, but I am hoping some time resting in the humidor will result in a more balanced profile overall.