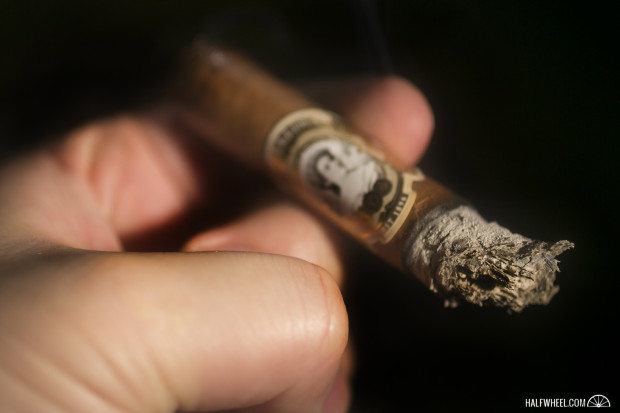 It was never a question of if, but rather when La Palina would finally answer the calls to create a lancero version of its extremely popular Goldie. Turned out, year three was the correct answer and earlier this year the company announced it would release the La Palina Goldie Laguito Especial.

Its name comes from Goldie Drell Paley, wife of Samuel Paley, the company’s founder and grandfather to current owner, Bill Paley. Introduced in 2012, the Goldie has been marketed by the fact that ever cigar is rolled by a single roller, Maria Sierra. In 1967, Sierra began her career in Cuba working under Avelino Lara rolling Cohibas at El Laguito. This was before the brand’s commercial release, meaning the cigars were being rolled exclusively for Fidel Castro, his government, friends and guests. Today, she rolls at El Titan de Bronze in Miami and is said to be a level nine roller, a certification not offered at Cuba at the moment.

It was also advertised for its use of medio tiempo leaf, a subset of the ligero priming. Medio tiempo is only found on some plants, usually two additional leaves that grow above the normal set of ligero leaves. While it has not been prominently part of the marketing language until recently, the leaves have been used for years. In some places to this day, medio tiempo simply gets classified as ligero. Other growers will separate leaves and sell them as medio tiempo—stronger, yet less flavor than ligero and usually more expensive.

Introduced in 2012, the Goldie was originally offered in a petit lancero-size with a fantail cap. It has now become an annual release with three total releases. 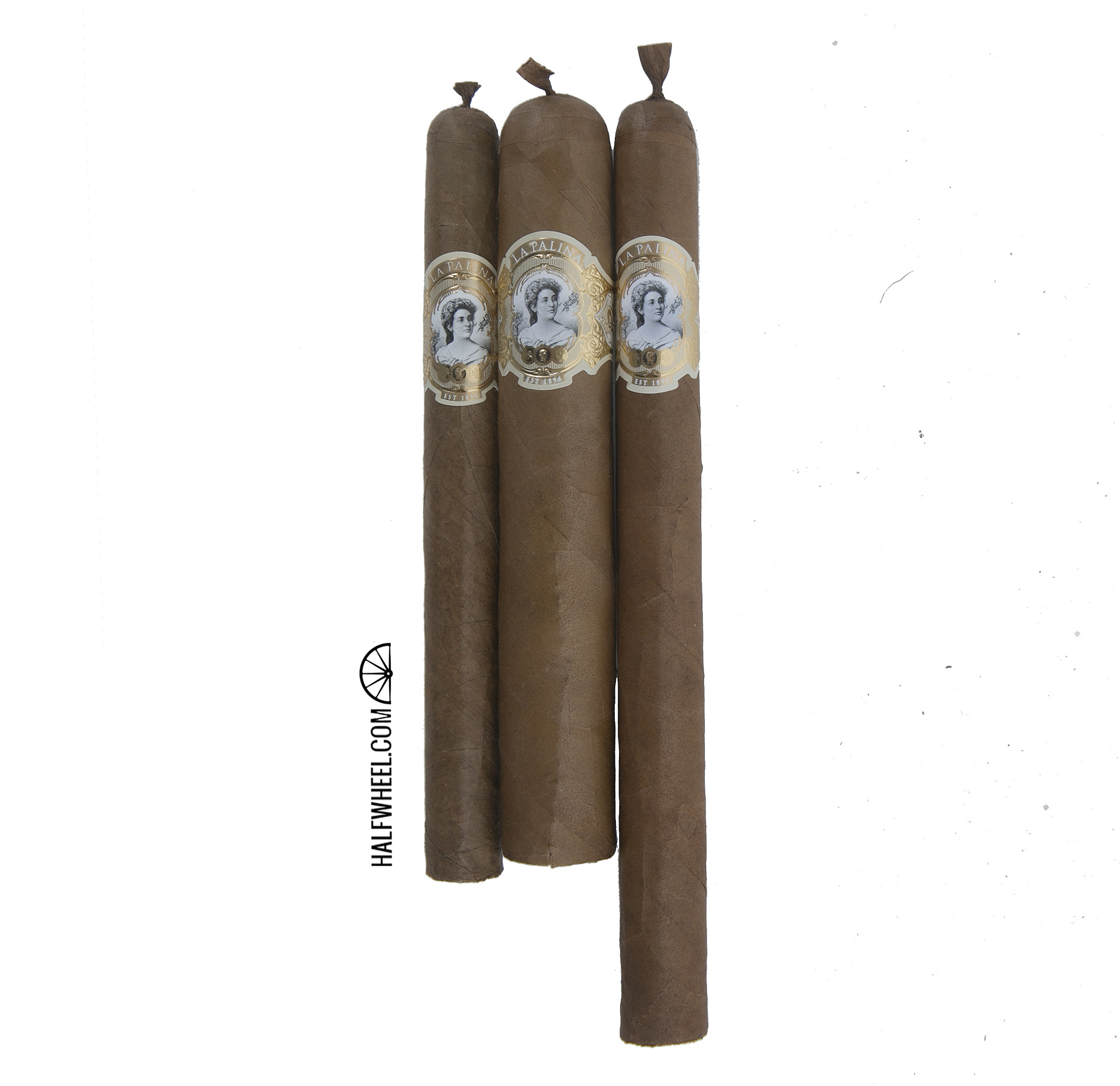 The 10-count boxes feature fan cut-outs. These boxes differ from the first two releases in that the cut-outs are not of wood, but rather a plastic mold covered in soft felt. 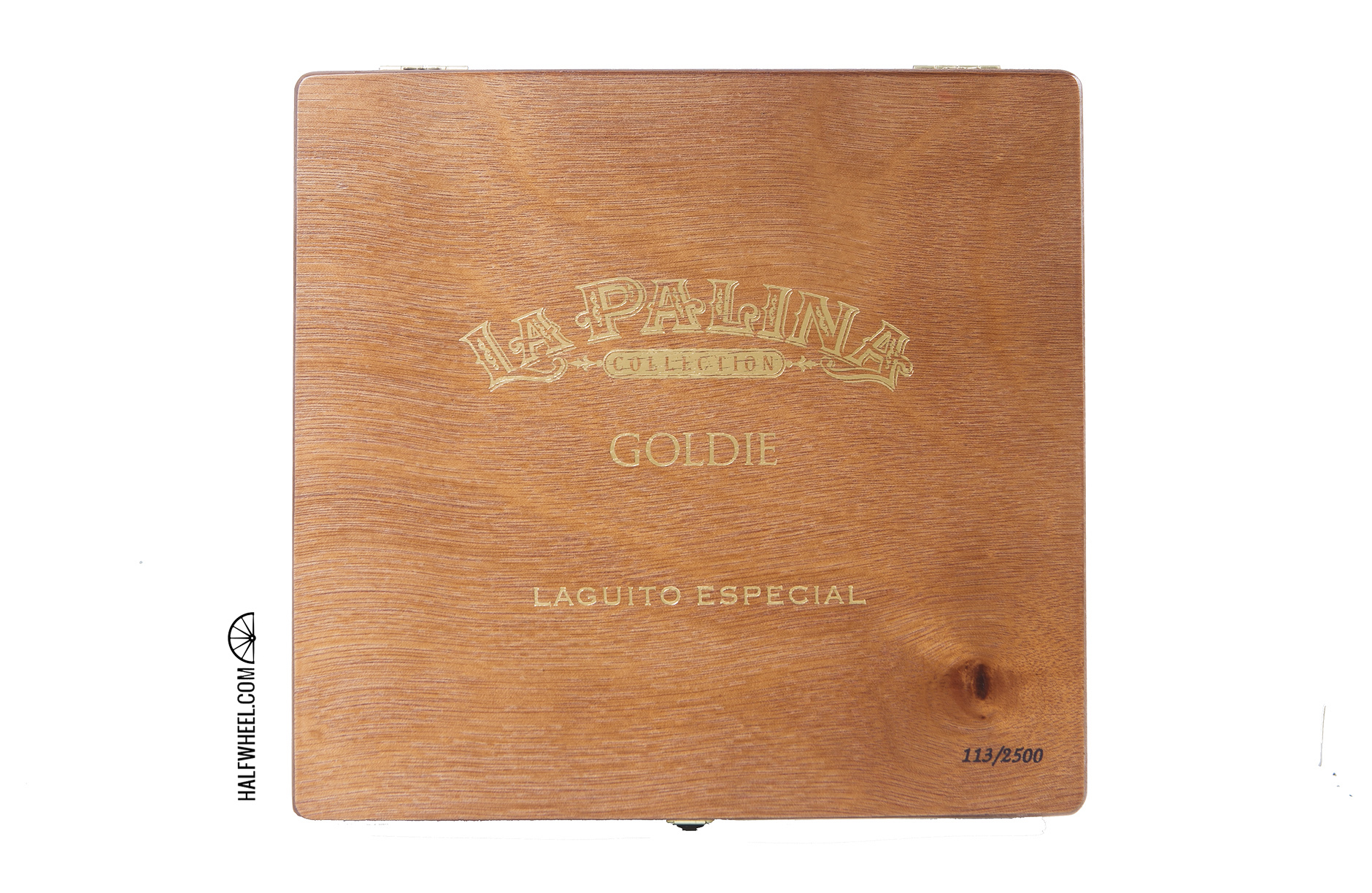 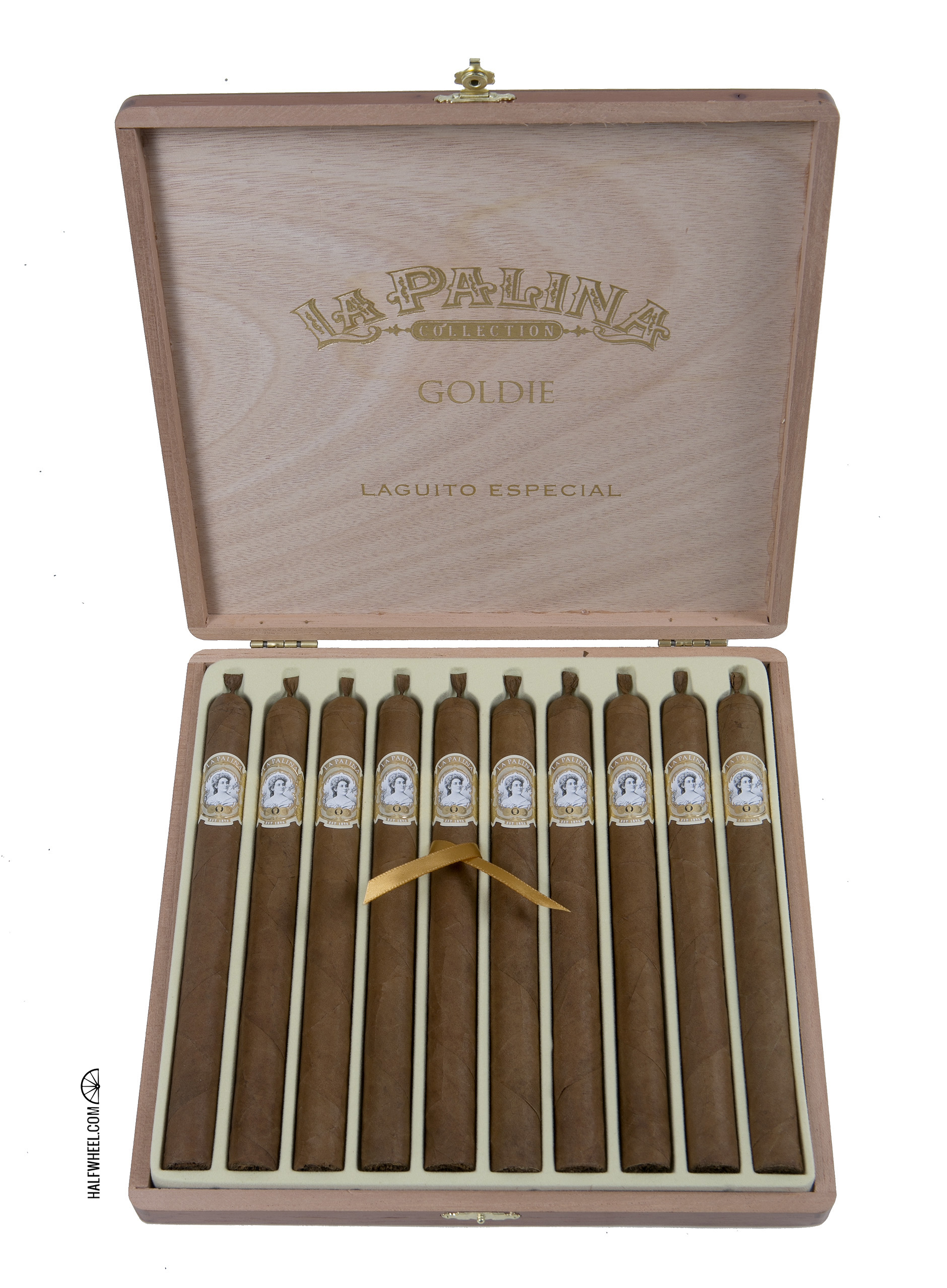 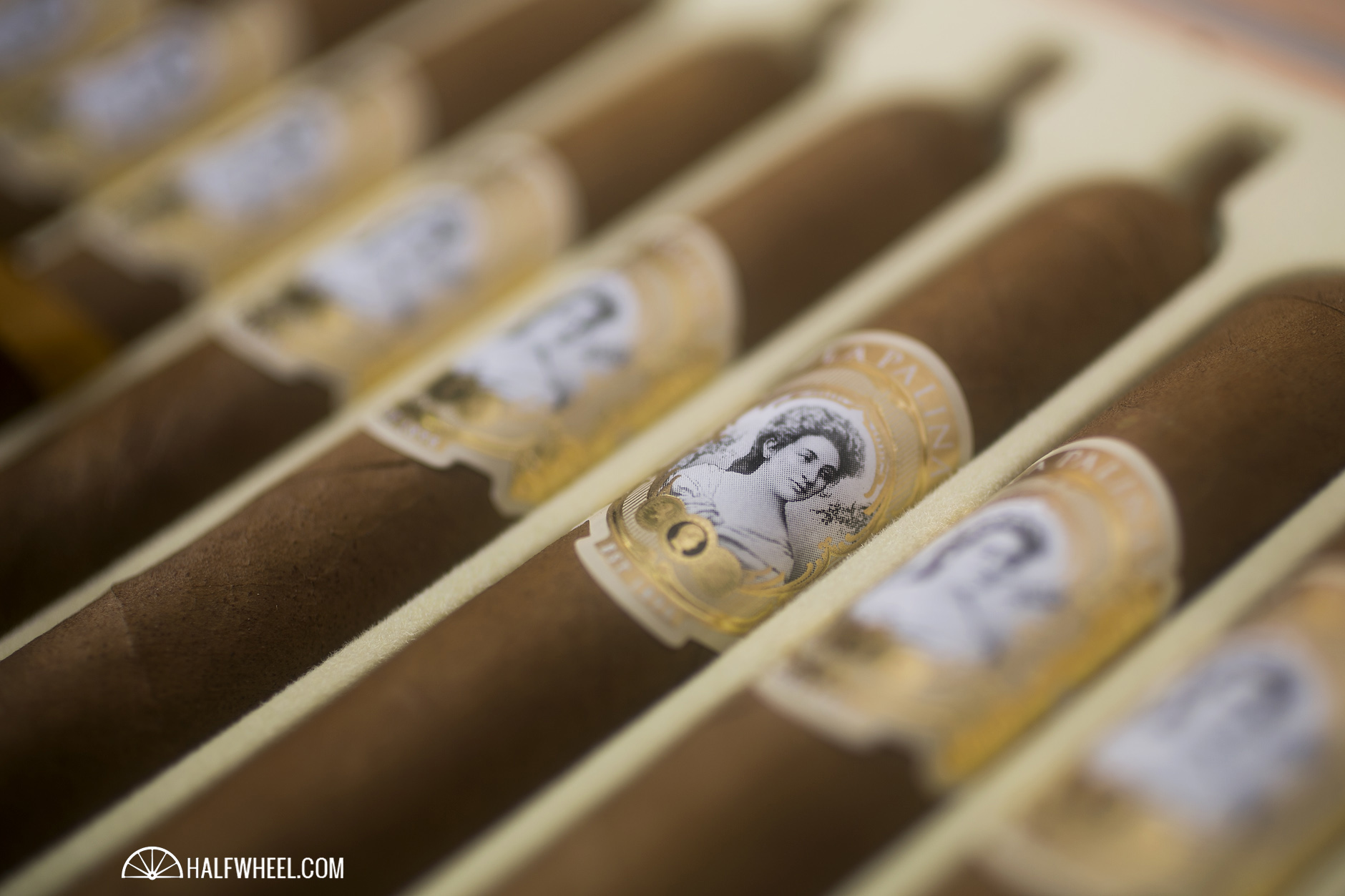 The Goldie Laguito Especial was introduced on May 2 at an event at Corona Cigar Co. La Palina began shipping the cigar nationally earlier this week. 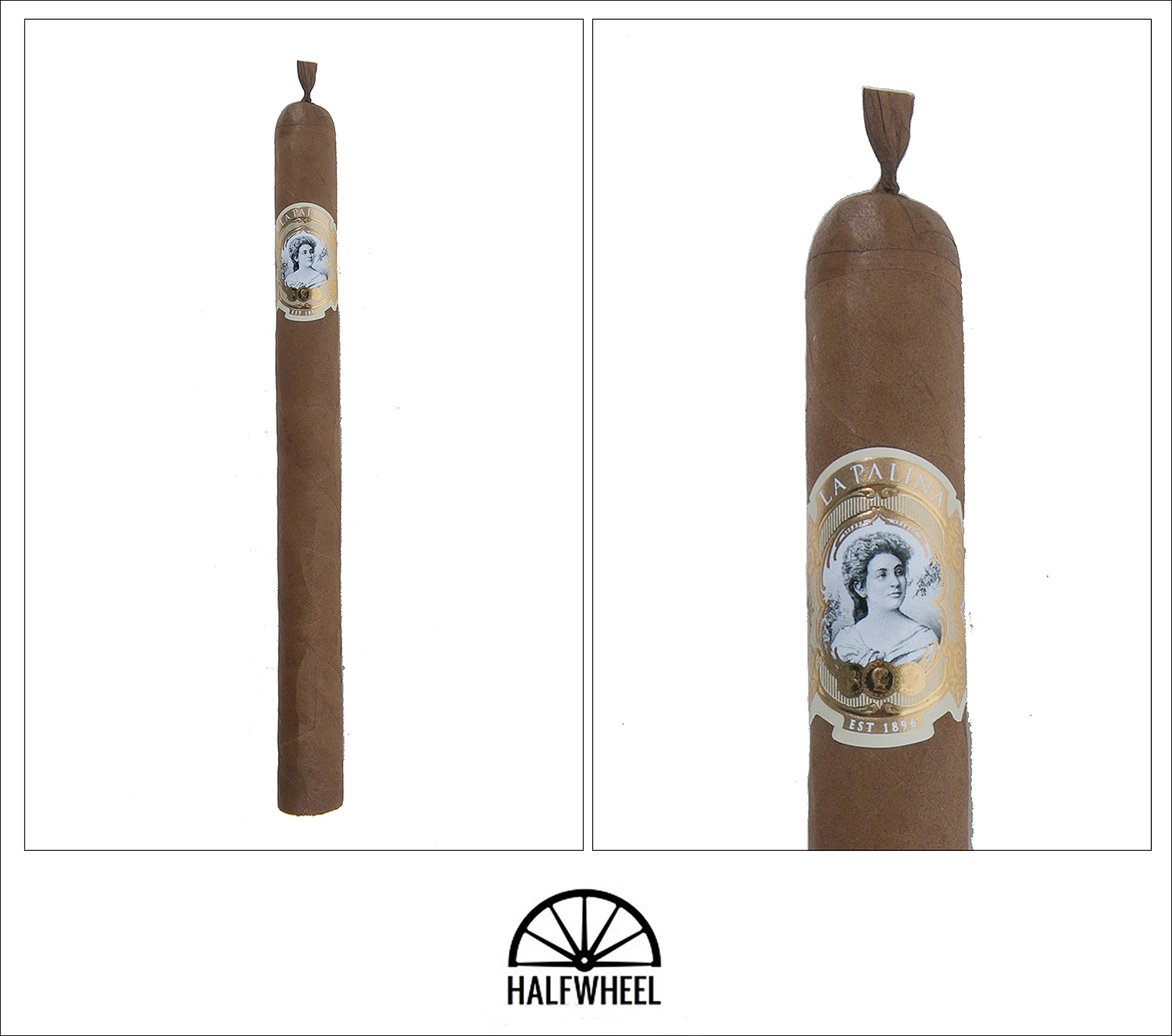 It looks like a Goldie. The Ecuadorian habano wrapper has a medium brown shade and the fan cap is rather familiar. There are plenty of veins on the wrapper, but the cigar still looks quite good. The wrapper has a general sweetness and touches of leather, but it’s quite mild. Unfortunately, the foot is concerning. It smells reminiscent of a cigar stored in a very smokey room, although there are also notes of sulfur and wet mushroom. The cold draw continues that trend, although the smoky note takes on a charcoal characteristic, burnt straw and sweetness.

The detailed start begins with a hearty cedar, a crema (espresso foam) sweetness and a nutty finish. There’s an immense amount of smoke that flows easily into the mouth with a draw that is a touch open. Gingerbread, peanut, and crema dominate the first third, it’s a sweet mixture, but not overly so. Saltiness and peanuts are the core of the finish. Apparent from the start is the fact that if you attempt to smoke the Laguito Especial at an even remotely normal pace it will get harsh, leading to a Pop Rocks like tingling sensation in my mouth. The ash holds very well and the draw remains great, but the sensitivity to pace is problematic. 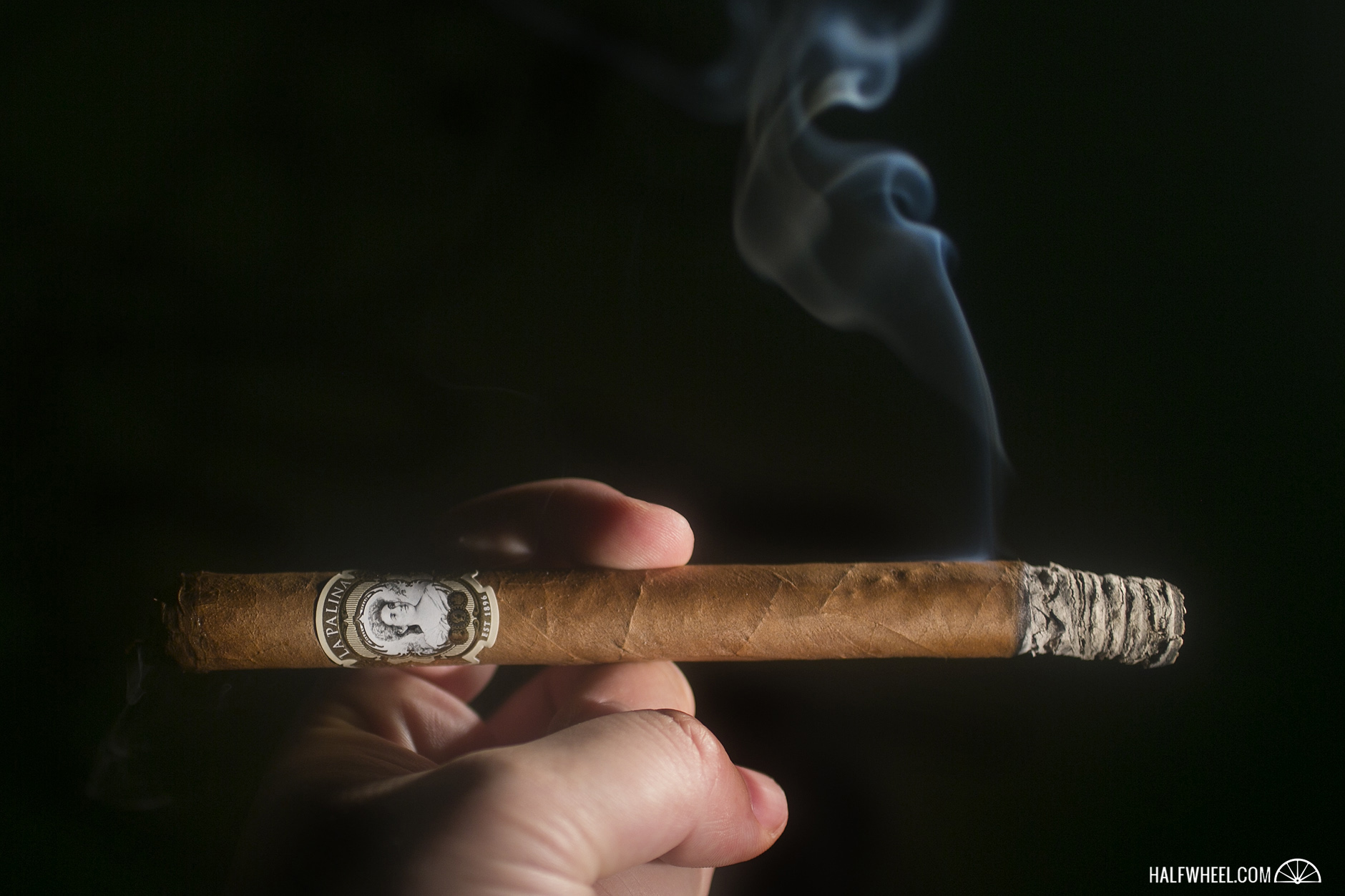 A root beer float note emerges on the transition into the second third. The Goldie Laguito Especial is still quite sweet, but it’s now due to a lemonade note underneath. There’s an acidic citrus note added to the nutty core in the nose with some Italian bread crumb notes on the finish. The halfway mark was a problem on the first two cigars I smoked, so I paid careful attention to the cigar staying lit, at around two inches smoke production slows again, so I pick up pace to avoid it going out. 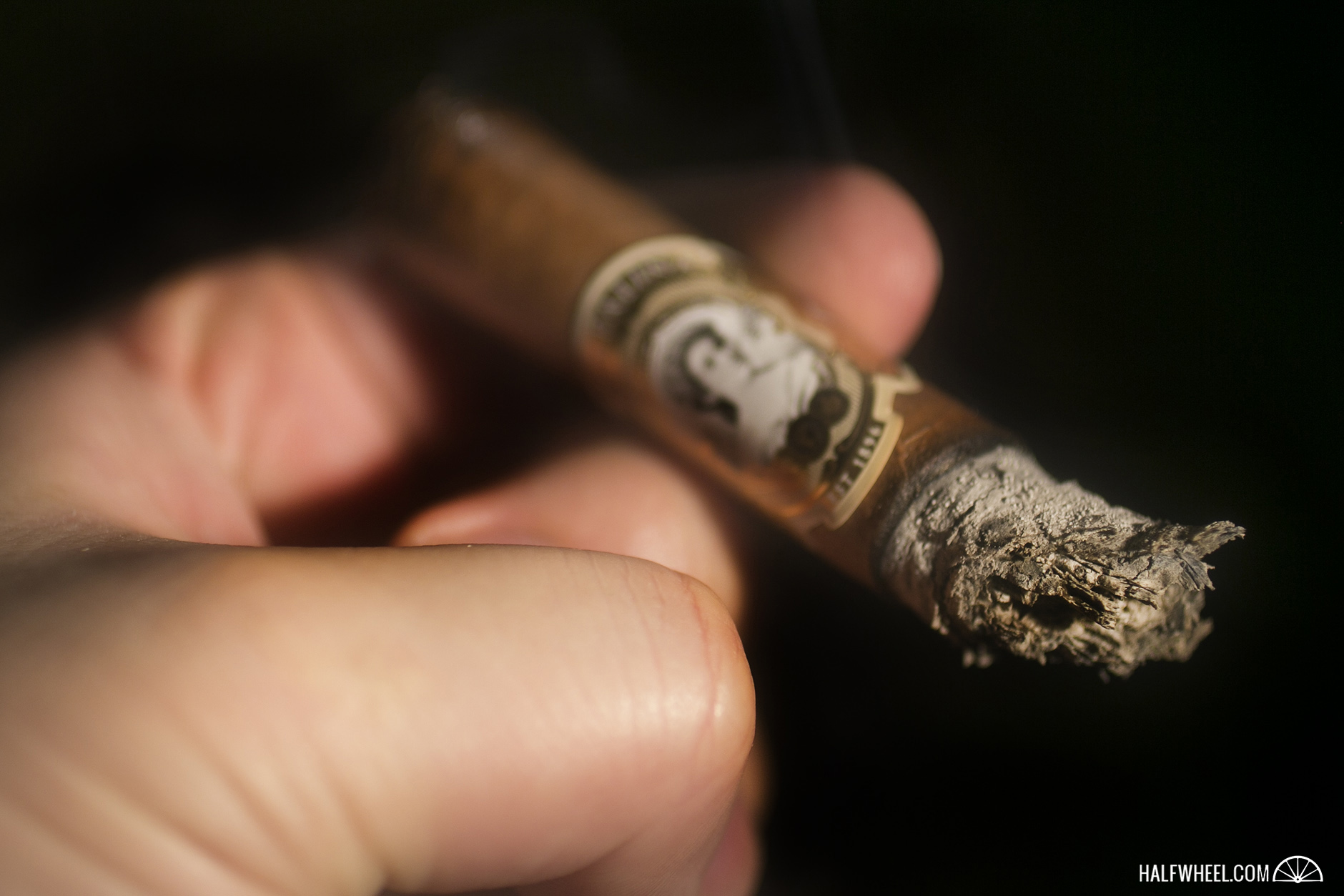 Cedar and paprika add themselves to the profile, which still has the nuttiness and saltines very much present. Rather than flavors swapping places, the Goldie introduces new flavors that overwhelm the previous ones with the task repeating itself at nearly ever inch. Smoke production predictably becomes challenging and in order to keep the cigar going, I have to get the last inch a bit harsh. 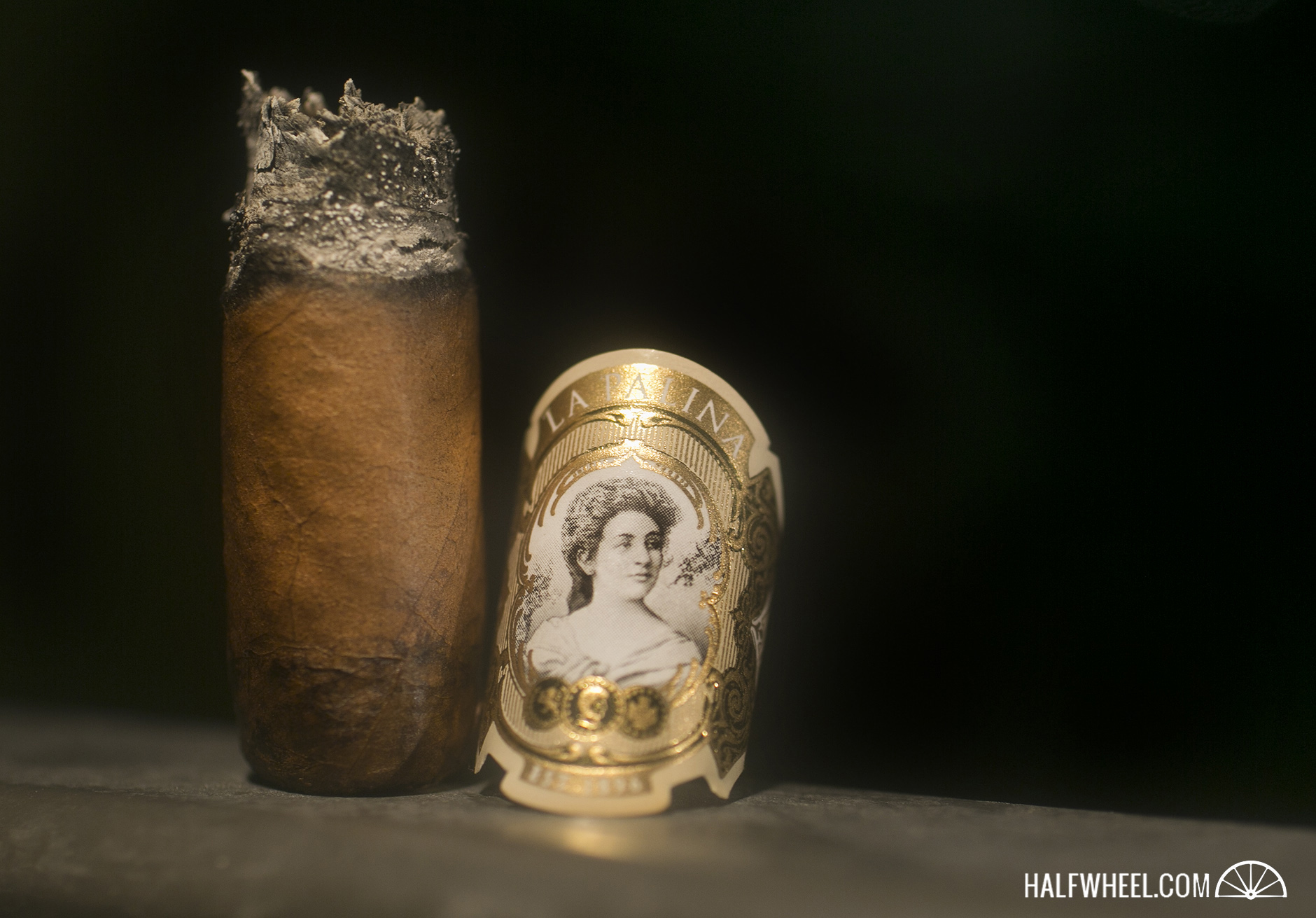 I think the Goldie Laguito Especial still needs a bit of rest. When the box showed up at the halfwheel offices a week ago, the cigars were rough, very rough. A week has done wonders, but it’s still not pure bliss. If you smoke the cigar at a normal rate, it will get harsh, if you slow down and respond to the tobacco, the cigar produces some incredible flavor. Unfortunately, the cigar also goes out largely without warning, and while the flavors do not become awful, the Goldie is no longer the same. It’s hard to make a buying recommendation on these, because they will sell out—and probably quickly—but, my guess tells me they will be better, if not easier to enjoy, this time next month. There are some wonderful flavors, but at this point it’s a slightly flawed rendition of an excellent cigar.