Every spring for the past few years, three letters have become staples in the cigar world: TAA.

It’s the abbreviation for the Tobacconists’ Association of America, a group of roughly 80 retailers who own some of the largest and most influential stores, and who collectively can move the proverbial needle for the 40 or so manufacturers who are also part of the group.

To bring some exclusive products to these heavy-hitting stores, manufacturers have been crafting limited releases for them, often by way of a new blend, sometimes by way of an exclusive size, or on occasion by giving TAA retailers early access to a new line.

La Palina is no stranger to taking the first approach, having released Bill’s Blend in 2016 and which would go onto get widespread release this year as the Illumination Toro.

This year, La Palina once again did the same, crafting a new cigar called the Bronze Label that comes out of a collaboration with Rocky Patel. The 6 1/2 x 52 toro uses primarily Honduran tobacco, with some Nicaraguan tobacco found in the filler and is made at Plasencia’s El Paraiso factory in Danlí, Honduras, the same factory that produces many of Rocky Patel’s blends.

“I’m very proud to be working with some of my oldest personal friends and collaborating with a terrific cigar company such as La Palina to produce this fine cigar blend,” said Patel in a press release. 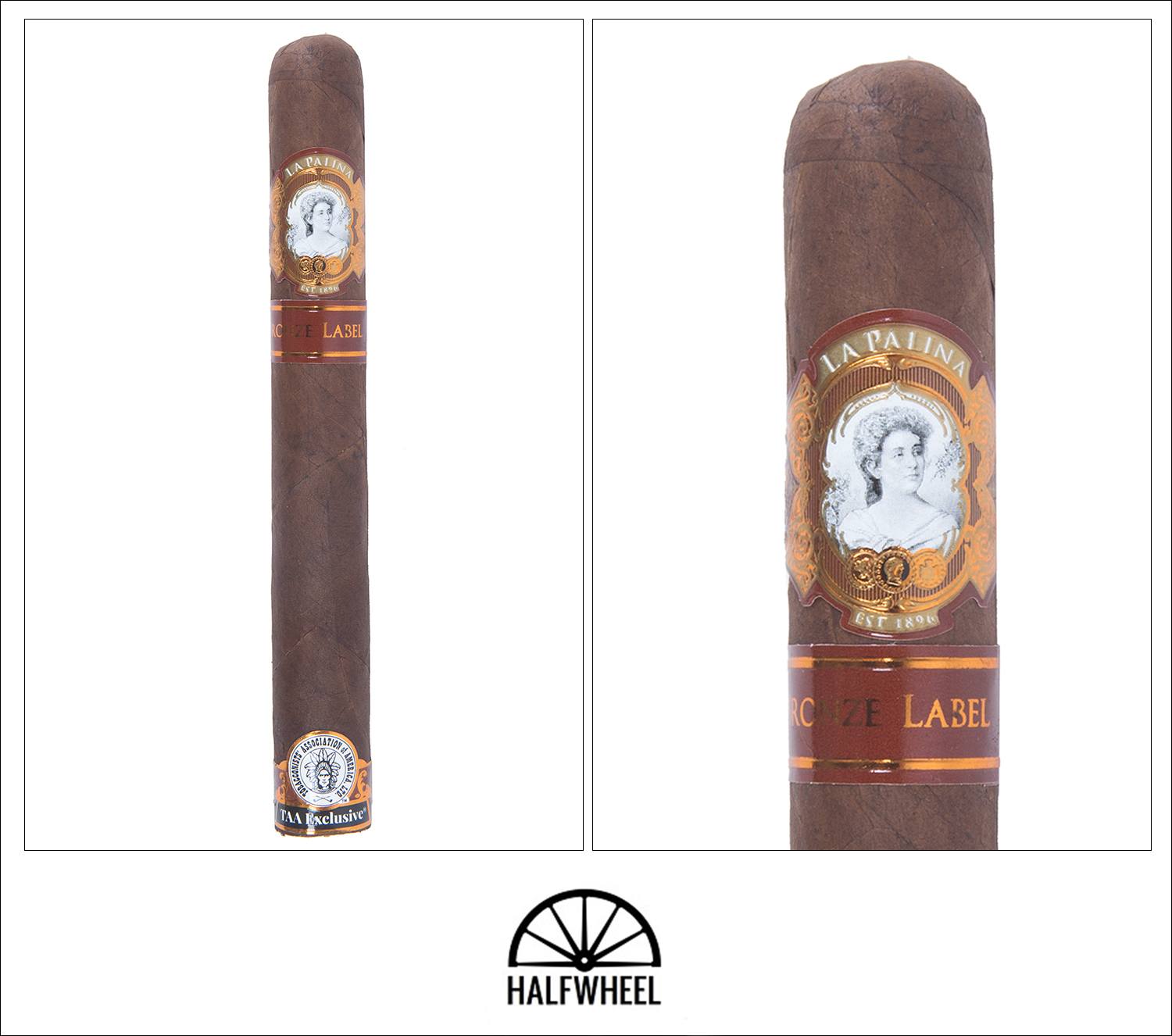 The La Palina Bronze Label TAA 2017 comes in an immediately recognizable and familiar toro vitola that wears three bands: one at the foot and two in the traditional location. It’s a firm cigar from head to toe with only occasional spots of give, and its coffee bean brown wrapper has a good number of veins and some visible tooth, along with a slightly bit of oil that is picked up on the fingers. The foot offers a light aroma that doesn’t jump out with distinct notes, but I get a bit of pepper, mandarin and vanilla ice cream, while the wrapper itself has a bit of nutmeg and an occasional bit of Hershey’s Kiss chocolate. The cold draw is a tick on the tight side, which is generally right where I prefer, though the flavors here are milder than what the foot offered. There’s still some creaminess but it’s more about texture than flavor, though one sample strays into warm Dr. Pepper and root beer flavors with some underlying earth and wood.

Each of the three samples I had started out a bit differently; as the first was quite mild while the second was much richer, with the warm root beer flavor reappearing alongside woods and earth, with just a hint of pepper. The third was much more pepper-forward than its counterparts, yet lacked the richer base notes of the second. It takes a little while for the La Palina Bronze Label to show its first noticeable characteristics, which is some bright and light pepper that comes via a retrohale that gets very subtle hints of baking chocolate from time to time. After the first clump breaks off at an inch in length, the retrohales get a touch heavier and are showing more of a black pepper profile. While there’s a bit of pepper in the flavor, the overall body and intensity is medium at best, though I can feel it beginning to creep up in anticipation of the second third. While not a smoke machine by any sense, the Bronze Label burns well and puts off an adequate amount, though I’m a bit concerned by the burn rate as it is shaping up to be a much more time-consuming cigar than I would have guessed. In the more flavorful samples, the transition to the second third picks up a coffee flavor that is marked by a bit of coffee grounds as well. The second third of the La Palina Bronze Label TAA gets underway with some more pronounced black pepper on the tongue, as well as a slightly tangy wood undertone that is reminiscent of fresh cedar. Retrohales have also taken a step forward in terms of pepper content and impact, and complement the flavor by providing a means to step up the strength should you desire. What bits of sweetness the cigar offered seem to be fading, as the chocolate has taken on a baked brownie expression, which while still good costs the cigar a bit of the richer and more engaging characteristics. At the midway point, the cigar loses what lushness it had and turns a bit more robust for a few puffs before a bit of thick cream emerges and coats the base flavors. Just past the midway point, the flavor moves into a realm of natural beef jerky, meatier but not particularly heavy, as the pepper fades from the palate a bit as part of the transition. The lighter parts of the wood component also pick up a bit of char, which is a hit-or-miss change for my palate depending on the sample. The cigar continues to burn slowly, and has me guessing it will be closer to three hours than two. 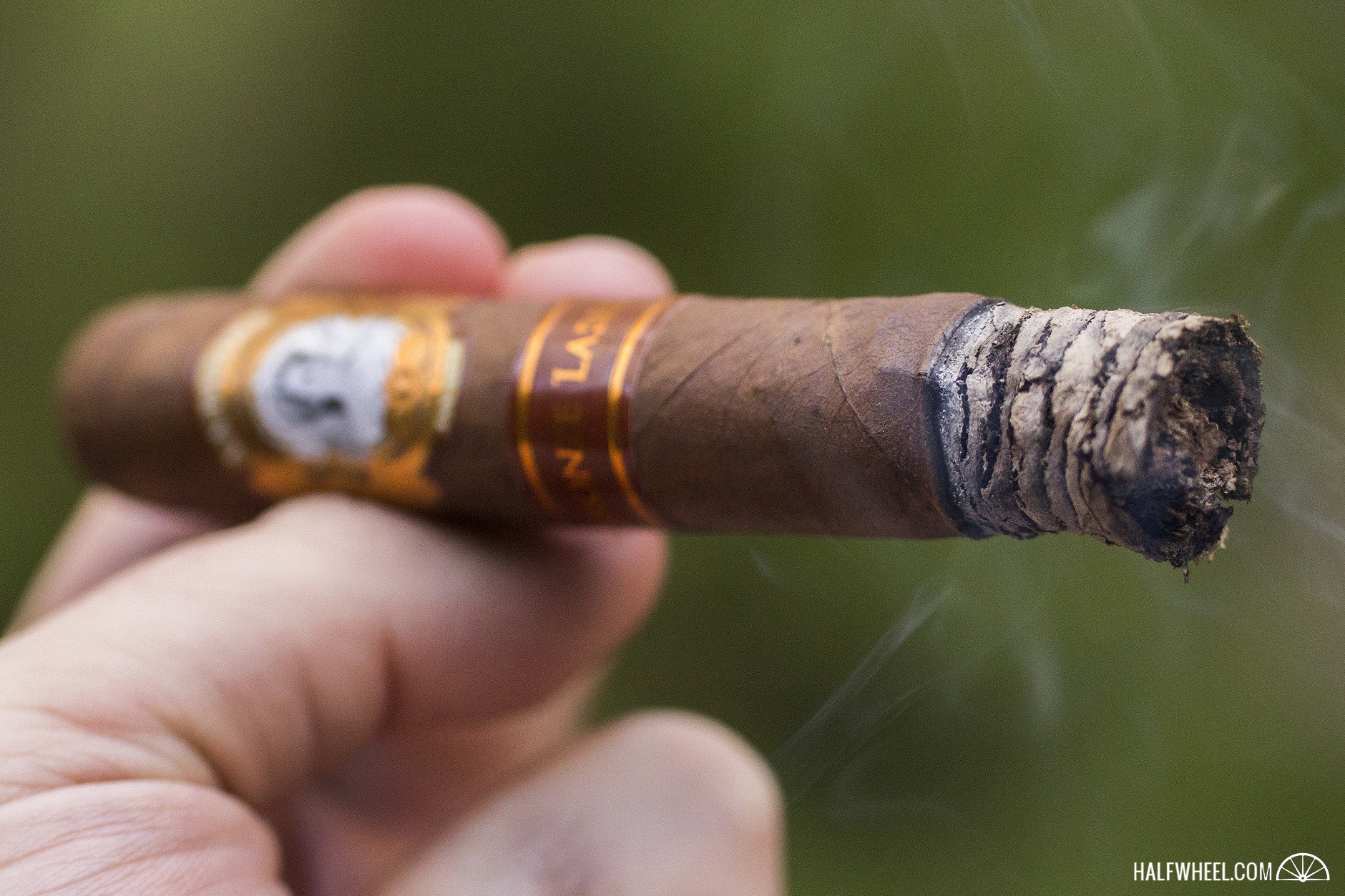 The flavor shifts once again at the start of the third, as the cedar the Bronze Label was offering isn’t quite as vibrant and now manifests a bit drier, almost moving towards lumberyard wood. I’m also beginning to get more of a dry, earthy undertone that helps nudge the profile into medium-plus territory, with the lingering tickle of pepper on the tongue reinforcing it but not pushing it further. There’s a little more heat from the cigar in the final two inches, something to be expected and which amps up the pepper just a bit, seemingly extending its stay on the tongue a few more seconds. The Bronze Label finishes quite nicely, burning evenly all the way down to whatever point I’m ready to call it quits at, with decent smoke production and no draw issues at all. Mark me down as impressed if not quite overwhelmed by the La Palina Bronze Label TAA 2017; the cigar is quite good, particularly in its more flavorful expressions, yet other than in a few spots stops short of being a true symphony of flavors. The coffee note that came out in the second sample is a particularly strong note, while the consistently rich wood and restrained yet flavorful earth form a solid base note that is quite pleasing to my palate, and what chocolate is present is an added bonus. Yet for all the good things it has to offer, I found myself searching for the symphony among the instruments, and just never came across it. Make no mistake, the La Palina Bronze Label TAA 2017 is quite a good cigar and one I'd certainly smoke again; hopefully when I revisit it the flavors will have come together in a way that could really push this cigar into the next level.