While the brand was dormant for many decades, Bill Paley—grandson of Samuel Paley, the brand’s founder—brought back La Palina in 2010. But La Palina is seemingly best known for what happened more than a century ago. The elder Paley emigrated to the U.S. from Ukraine and eventually found work as a lector at a cigar factory. After working as a lector and roller, he started his own cigar business of his own, Congress Cigar Co., in 1896. By 1910, Paley had opened a cigar factory in Philadelphia and eventually began turning over responsibilities to his son, William S. Paley, Bill’s father.

The middle Paley turned to radio advertising to help grow the cigar brand, and saw his sales increase thanks to a program called the “La Palina Hour.” He eventually bought into a small radio network called Columbia Phonographic Broadcasting System, which was partially owned by the parent of Columbia Records. Pretty soon, Columbia opted to divest its shares and Paley became the majority owner of the company, now known as CBS.

While CBS became Paley’s main focus, La Palina’s controlling rights were sold to Porto Rican-American Tobacco Co. in 1926 and was around in various forms and fashion until the end of the 20th century. This included time as both a premium and machine-made cigar and was eventually part of Consolidated Cigar Corp., which is now known as Altadis U.S.A.

Last year marked the 125th anniversary of La Palina and like so many cigar companies before it, the company decided a major anniversary should be marked by a special cigar. For this release, La Palina turned back to the height of its popularity for inspiration for the packaging. The band is quite similar to one La Palina used in the 1920s and the cigars are packed in glass jars that are designed to be similar to what the company used 100 years ago, though made with modern technology. 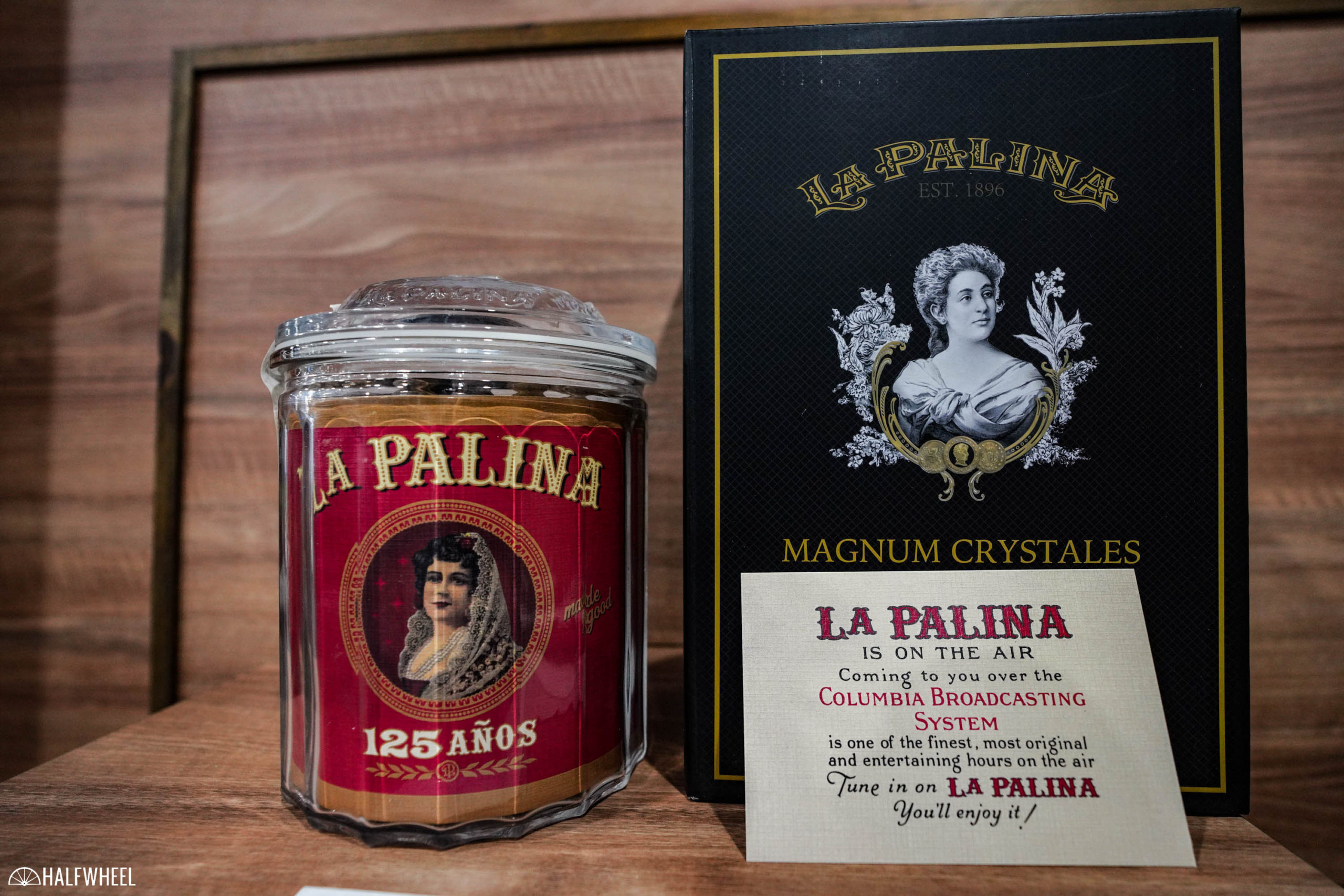 As for the cigar, it’s a 6 1/2 x 52 toro made by Oliva Cigar Co., a company that’s not known for producing cigars for other brands, though it certainly has done so in the past. Originally, La Palina did not disclose the blend, though it later said that it is made entirely of Nicaraguan tobaccos.

The La Palina 125 Años is limited to just 300 jars of 37 cigars, which began shipping to stores in December 2021. In addition to the jar, retailers were sent an additional bundle of 37 cigars accompanying each jar. The first thing that jumps out to me is that this cigar has a pigtail, which is not something that Oliva is not known for using on its own cigars. It’s interesting to me that the factory is willing to do this, but Oliva as a brand has avoided it. The band is printed nicely, though without the jar it’s really tough to understand that this is a flagship product, let alone a halo product. The wrapper has a decent color with some minor discoloration, though my larger issues are loose seams on one cigar and a bit of a bump in one of the veins that makes the bottom part of one cigar appear gnarly. Where the wrapper stands out to me is in the feel, as it makes me think of the most supple natural leather. The aroma from the La Palina 125’s wrapper is a mixture of floral sensations, cocoa, barnyard and some rocky earth. The foot smells a bit stronger, medium-full, and has a bigger barnyard flavor joined by chocolate and a sweet apple sensation. Cold draws have earthiness and chocolate over floral flavors, oatmeal and some barnyard. Depending on the cigar, the cold draw is medium-plus to medium-full in intensity.

There’s a plethora of flavors at the start of the La Palina 125 Años: earthiness, oatmeal, green grapes, a rocky earth, some leather, touches of white pepper and then a familiar apple flavor towards the finish. The first third is led by a mixture of nuttiness and a generic dough over some Ritz crackers and oak, as well as either cedar or vanilla at times, though both are subtle. Depending on the puff, the nuttiness can either be stronger than, as strong as, or milder than the dough, the latter of which remains consistent. At times, the profile is a bit sharper than I’d like, though it doesn’t have the pepper notes that are typically associated with sharpness. The finish has cedar, some pleasant herbal flavors and some mild floral sensations. Once again, at times the profile comes off a bit too sharp, though it’s due to a sharp sweetness. One sample’s Ritz cracker flavor does well to help bring everything together, though it’s not like that on the other two cigars. Retrohales have floral flavors, creaminess, oak and milder flavors of white pepper and citrus. The finish has a sweet citrus flavor that transitions into creaminess and then a return of the Ritz cracker flavor. At times, there’s some meatiness and white pepper underneath of my tongue. Flavor is medium-full, body is borderline full and strength is medium. Construction is great on all three samples during the first third.

The second third sees cedar and oak overtake the creaminess, nuttiness, white pepper, leather and some dry cracker flavors. A heavy dose of creaminess leads the finish, edging out some grains, white pepper and crackers. The cigar has an incredibly long finish and after 30 seconds, black pepper transitions the finish into a more of a mineral-laden earthy flavor. Retrohales have nuttiness, hay, creaminess, leather and black pepper. Only a few seconds after the smoke has left my nostrils, the black pepper is pretty much gone, giving way to hay, a generic fruitiness, creaminess and saltiness. Flavor is closer to full, body varies between medium-full and full and strength is pretty much medium. Two samples need touch-ups for minor burn issues, though the cigar is otherwise doing quite well from a construction standpoint. Earthiness is one of the main flavors during the final third of all three cigars but what else is there differs quite a bit. Two cigars have lots of peanut shells and a bit of toastiness joining the mixture. The outlier sample—the second cigar I smoke—has saltiness and leather. The finishes of the cigars differ quite a bit too: on two cigars, it’s peanut shells and herbal flavors over some creaminess, nuttiness and hints of white pepper; while the other cigar has more black pepper and hay over cedar and creaminess. Retrohales have nuttiness, a bit of a new car smell and some grain flavors on two cigars while the other one is led by black pepper over cloves, cinnamon and earthiness. Predictably, the finishes of the retrohales are quite a bit different: one sample basically just adds some earthiness to the nutty flavors that were already there, another gets even nuttier, and the outlier sample has earthiness and creaminess over black pepper and some liquid smoke. Update (March 9, 2022) — Added some more info about La Palina’s history post-1925. Thanks to Jim Collucci for pointing out these errors.

If you are choosing between a $20-25 La Palina and it’s this or a Goldie, you should know there’s basically nothing in common with the two blends. The La Palina 125 Años is richer, stronger and a bit easier to smoke than what I’ve found from the Goldies. If the price wasn’t as high, this would be a great cigar to keep around for gatherings of a wide range of smokers because I think many different people can find different types of enjoyment out of the cigar. If you smoke it quicker, it gets spicier, if you take your time the nuttiness and cedar flavors come to the forefront. There’s not that much inherent pepper and the strength is basically medium, so I feel like most cigar smokers can handle it. It’s a cigar that’s easy to forget about and just relax, but when you want to really focus on it, there’s a lot more than what’s on the surface. It’s one of the better cigars I’ve smoked from La Palina, which is really what you want when you are commemorating a major anniversary like this or pricing a cigar where this is priced. While there are some things I find a bit odd with the choices made to get to the cigar, the sum of those choices is quite good.