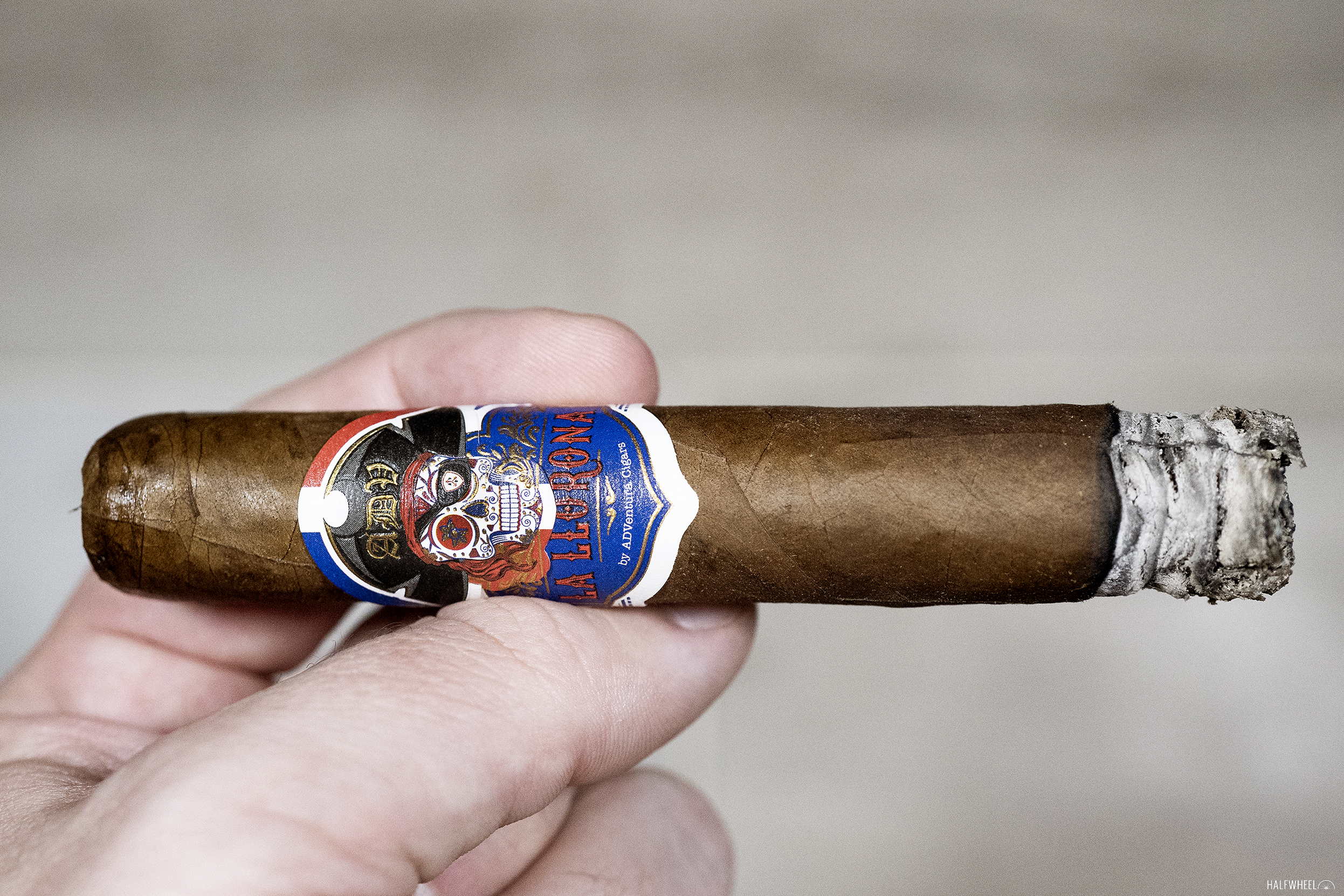 The inspiration for cigars is brought up numerous times on this website. Sometimes it is the anniversary of a company, a birthday of an individual, a new seed varietal, a journey from one country to another, even parodies of other brands or just more juvenile humor and double entendres.

While there is a backstory to the La Llorona from ADV & McKay Cigars Co. that ties into the name of the cigar, the more interesting part of the cigar’s story is why it was released.

As Marcel Knobel, the company’s co-founder, explained it, there is a decent amount of pressure for cigar companies to offer deals on their products to retailers, whether it be through price reductions or sales incentives, promotional swag, in-store events, and so on. For a company the size of ADV & McKay, that makes it challenging to compete with the bigger companies that can offer those discounts and incentives, as they don’t yet have the volume to absorb significant discounts the way larger companies can.

So instead of trying to fight a battle it knew it couldn’t compete in, ADV & McKay pivoted and decided to reward their highest volume accounts with an exclusive cigar line, which would also help the company gain more shelf space in the humidors of retailers that carry ADV & McKay. In theory, it also helps ADV & McKay sell more cigars, which not only makes the company more money but would seemingly help establish it as a line that needs to be in retailers’ humidors.

That line is La Llorona, and as of this writing, it is being offered to only 20 stores, though that number is subject to slight fluctuations.

The cigar gets its name from a character in Latin American folklore known as the crying woman. For this release, La Llorona is a widow who is trying to hunt and kill pirates, Knobel said. It also ties La Llorona into the larger ADVentura storyline, which chronicles the adventures of ADVentura and his sidekick McKay, who travel the world on various expeditions, missions and adventures.

The blend features an Ecuadorian wrapper, a Dominican binder, and fillers from the Dominican Republic and Nicaragua. It debuted in a 5 x 52 robusto vitola that comes with an MSRP of $16 per cigar and $160 for a box of 10 cigars. A second size is already in the works, though the company has not yet disclosed any details on what that size will be. 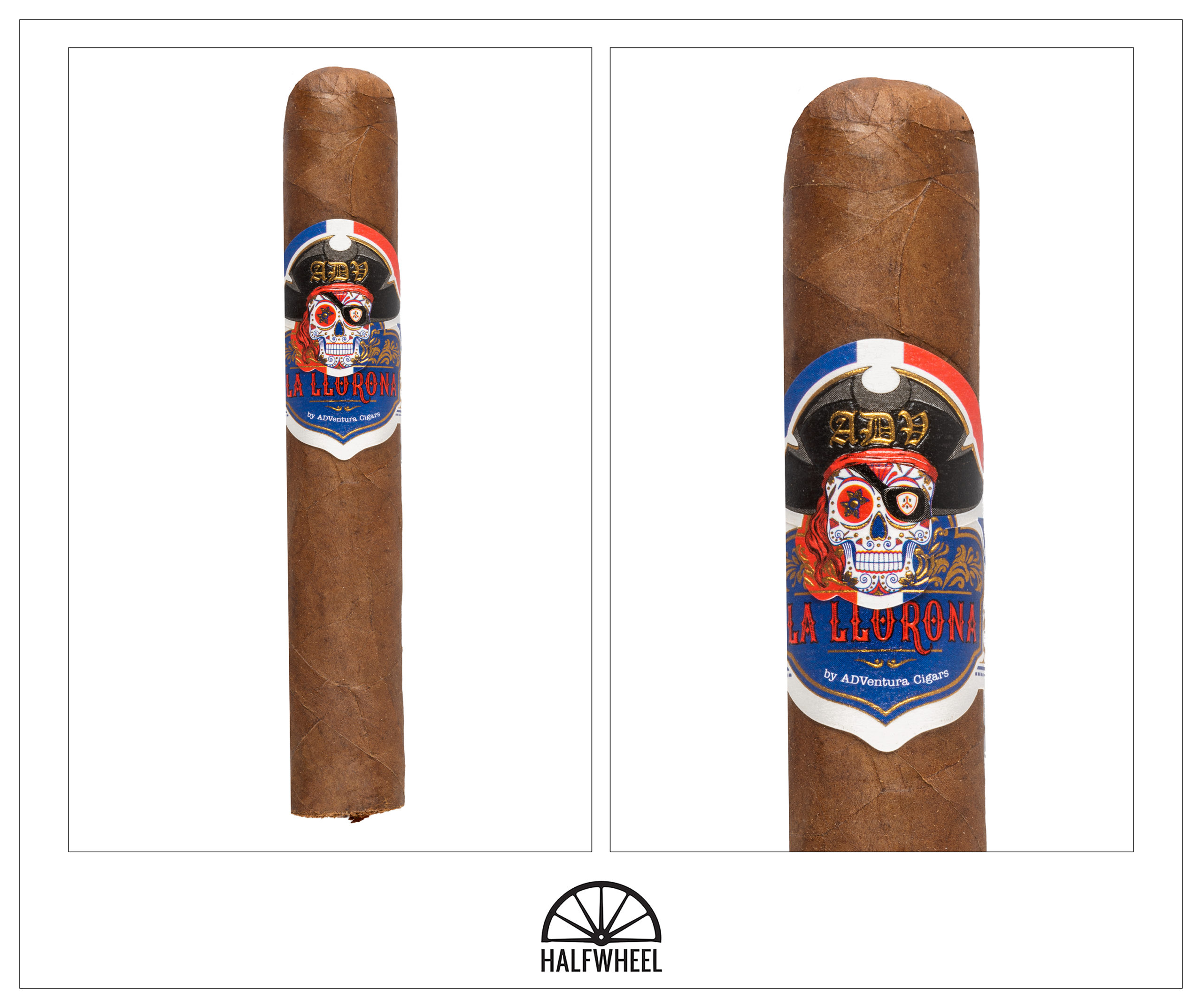 If not for the band, I’d say that the ADVentura La Llorona Robusto looks like many robustos, sporting a wrapper that has a darker than medium shade of brown with some small and scattered darker spots, along with a few small veins and nothing that distracts from the visual. The seams are flat and the seam lines disappear into the wrapper, while the heads are nicely rounded. The leaf doesn’t ooze oil, and while it’s generally on the dry side to my fingers, it does feel like it has remnants of oiliness, with a texture that reminds me of candle wax at times. The cigar is on the firm side with just a touch of give in scattered spots throughout the three cigars, and when I find them they’re not necessarily soft spots, just areas of slight variance. One cigar is quite firm in fact, without any such spots. The foot has a light aroma that initially has me thinking of the center parts of a wheat roll. There’s a bit of plain butter and something giving the aroma a bit of sweetness, though I can’t quite pinpoint what it is. One of the three cigars is notably lighter and approaches soup crackers. What I don’t find is any pepper across the three cigars. The cap clips off cleanly, and the flavor is much the same as the aroma. It’s light though not quite as bread-forward, but it is a starting point for the description as I’m not picking up much else. Like the aroma, the cold draw has little in the way of pepper. The airflow is generally smooth and fairly easy with varying amounts of resistance, which seem directly correlated to the firmness of the cigar.

As is often the case, what the La Llorona Robusto offers before being lit is only a hint as to what it offers once burning, as there is a decent amount of pepper out of the gate that sits atop a fuller and slightly toasty bread note, firewood and a bit of creaminess. There’s a touch of dry wood as well, a bit thin at times but making its presence known nonetheless. Early retrohales also have a bit of pepper, though it is more of an accent than a second helping. It’s not long into the first third that the profile seems to have found an enjoyable and familiar profile, slightly dry with toast and woods, slightly peppery both on the palate and through the nose, and with a decent finish that gives the taste buds a subtle tingle. I’m enjoying much of what the first third has to offer, though I’m a bit surprised there isn’t more earthiness in the profile, as it seems the cigar is ready to add it and give the flavor a heavier base, but so far it hasn’t done so. There are some flirtations with creaminess, though never quite a full embrace in this section. Flavor is medium-plus, body is medium, and strength is mild. Construction and combustion are both great.

I find myself focusing on retrohales as the cigar gets into the second third as I’m hoping they show the next change of the La Llorona Robusto before it shows up on my palate. The first thing I notice is a sharp, chili pepper heat that hits my nostrils with the precision and sharpness of a needle. That sensation doesn’t hit my tongue, as the flavor seems to go the other way, becoming creamier and thickening up the body of the smoke. If anything, the ambient smoke has more of an effect on my eyes than my tongue. As the creaminess builds, the cigar’s vibrance has settled down just a bit, which isn’t necessarily a bad thing as the flavor and body feel fuller and richer. If anything, it’s a pleasant contrast to the first third and an example of how blends change as the cigar progresses. The earthiness that I had been looking for earlier appears towards the end of the second third and brings along with it a more robust profile, shifting away from what has generally been a smooth profile to one that is a bit rougher and textured. There’s a bit more pronounced black pepper as a part of that change, delivering a different expression of pepper than what was offered in the first third. Construction and combustion both remain fantastic and problem-free. The flavor intensity varies from medium-plus to medium in this section, while body is now medium-plus and strength still in the mild part of the spectrum. 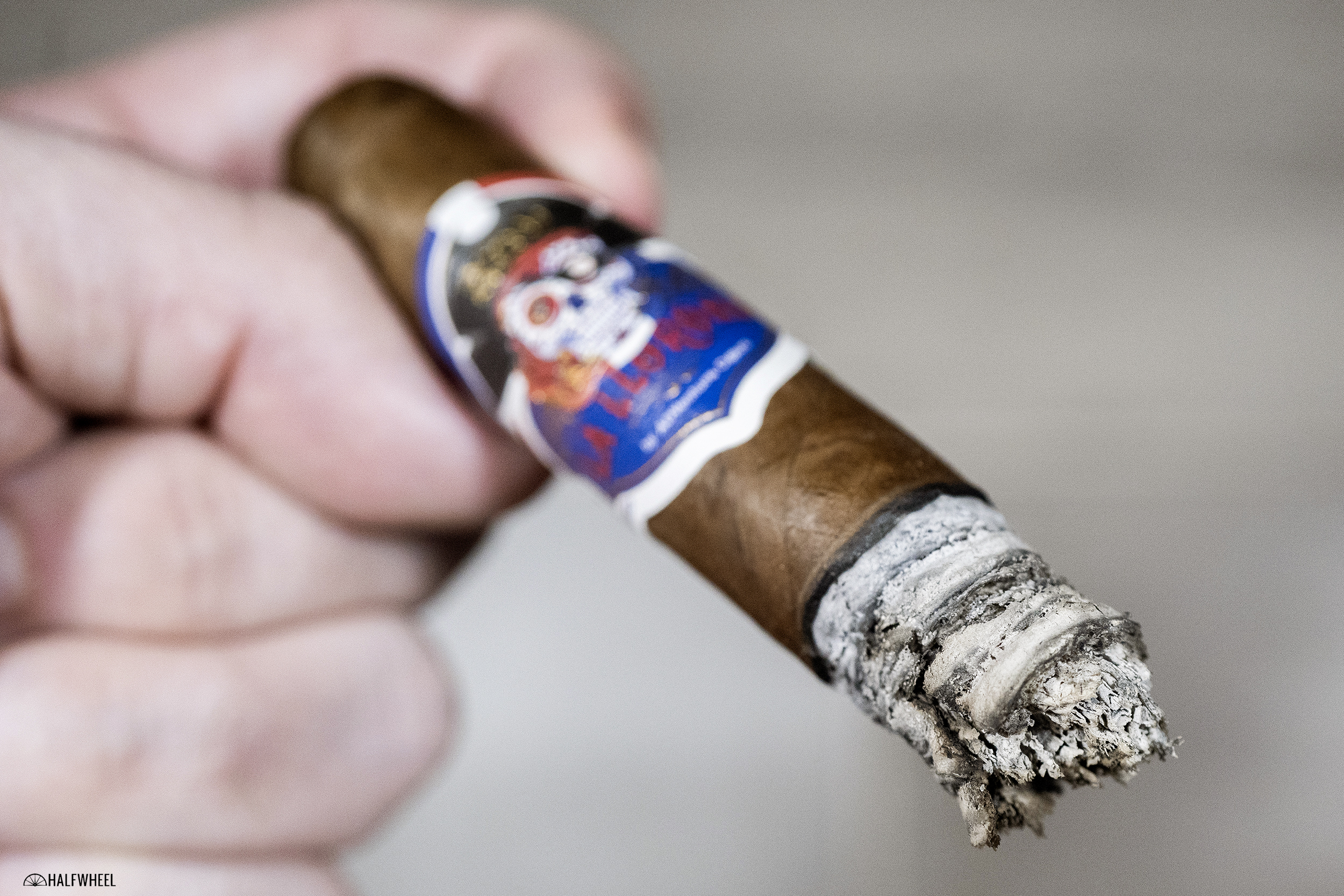 Right around the start of the final third, I notice the La Llorona Robusto making some further changes to its profile, first picking up a bit more of a toasty, almost graham cracker edge, which has a tendency to become over-toasted and a bit burnt not long after. I also get a bit of graham cracker sweetness from the aroma while the cigar is at rest, a thick and enveloping sensation that is not only attention-grabbing but quite enjoyable. There’s more black pepper to be found in this section, as that component is the next to evolve and step forward in the flavor, as well as in the overall impact of the smoke. I notice a bit getting into my eyes on a puff and while it’s not particularly irritating, it is felt. In one cigar, the midway point of the final third pushes the flavor to a new peak, as it is quite complex and balanced, blending the vibrance of the pepper with a thick creaminess that coats the tongue. Unfortunately, the final inch-plus sees the flavor get a bit funky, seemingly the heat of the cigar sending the otherwise enjoyable flavors off the rails and signaling it is getting close to being time to put the cigar down. Depending on the individual cigar, it is either a fairly quick change or one that is a bit more gradual; either way, it is the inevitable conclusion to a building change that started not long into this section. Regardless, it is one that—for my palate—makes the La Llorona Robusto tougher to truly enjoy, especially in comparison to the first two thirds. That said, one of the three cigars largely manges to dodge the problem and is easily the best of the bunch. Both the flavor and body are generally medium-plus to just reaching full in this section, while the strength is just touching the medium mark, though I don’t feel any notable effects. As it has from the start, the ADVentura La Llorona Robusto continues to burn beautifully, offering an easy draw, plenty of smoke, and an even burn line. 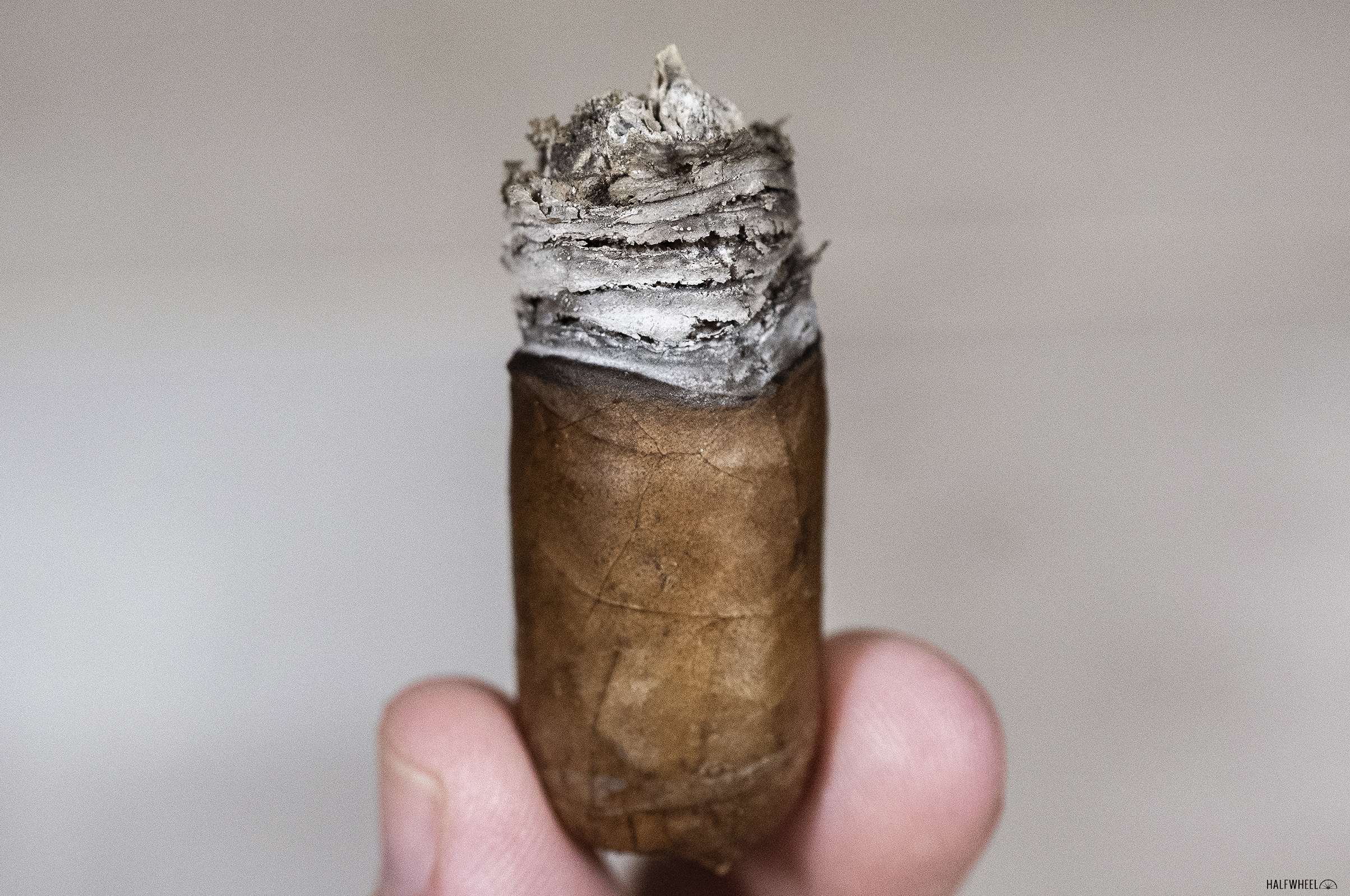 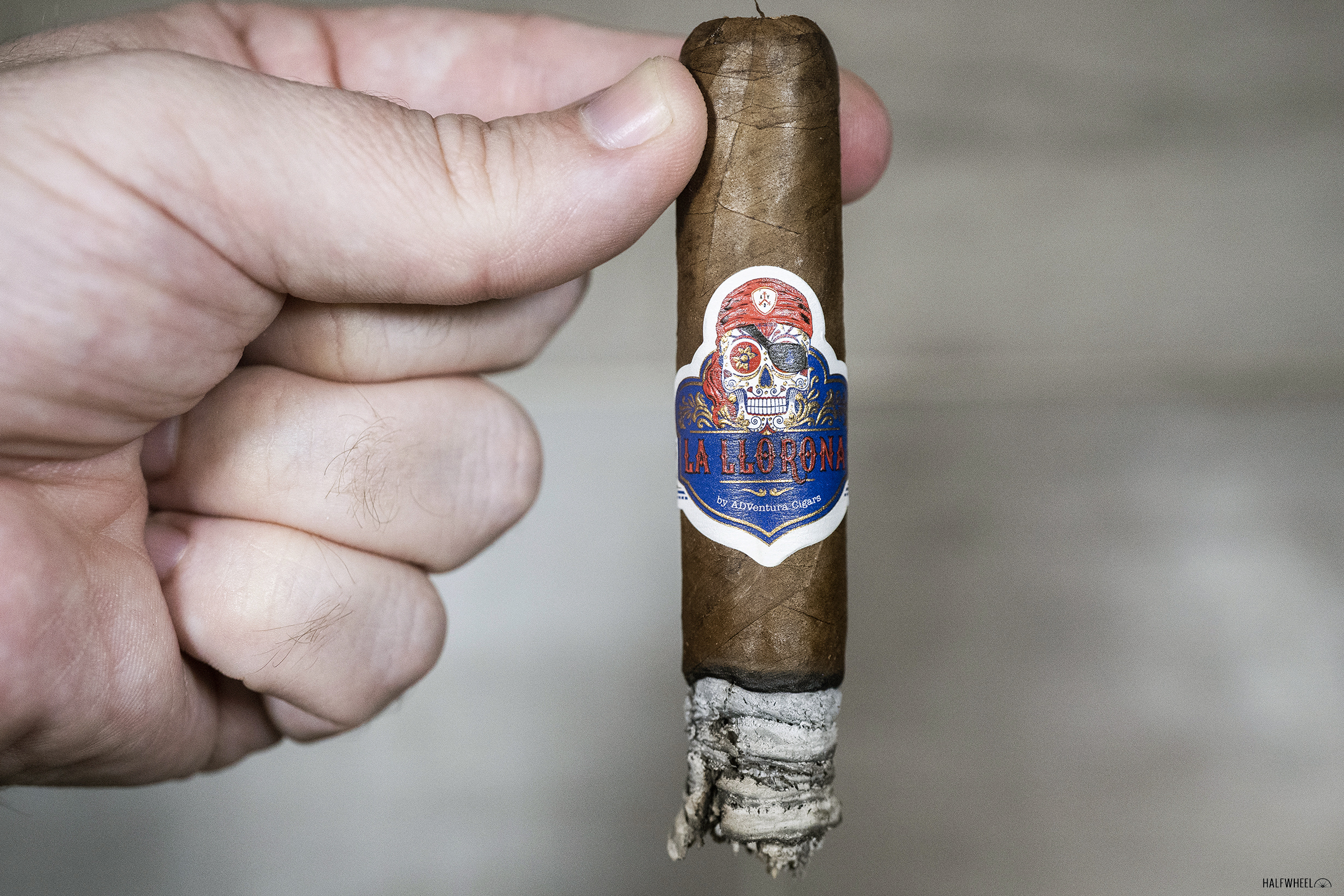 First and foremost, I commend ADV & McKay Cigars Co. for taking the approach it did with La Llorona, offering it as an incentive and reward to its best retailers as a way to zig when a good amount of the industry zags towards discounts and swag. As for the cigar, it delivers in terms of flavor, offering a fairly familiar profile that is generally balanced and complex, save for some issues in the final third. Along the way, it checks many of the flavor component boxes, including decent amounts of pepper, creaminess, woods and toast, and touches of earthiness. It also shows some transitions in its smoke texture, from vibrant and textured to smooth and mouth-coating. Each cigar also smoked quite wonderfully with no issues that required touch-ups. While I'd like to see the flavor issues in the final third get smoothed out, on the whole the ADVentura La Llorona Robusto is a very enjoyable cigar and one I'd easily smoke again as well as recommend.