Private businesses of certain kinds are legal in Cuba, Amongst the most popular are paladars, family-run restaurants.

La Guarida is arguably the most well-known paladar in Havana, and certainly one of the most sought-after to get into. It is a restaurant that graces many “must visit” lists that you will pull up when searching for lists of things to do in Havana, and it certainly has established the culture of paladars both in Havana and throughout Cuba.

It opened on July 14, 1996 on the top level of a historic three-story building from the early 20th century in Havana’s Centro neighborhood. With the exception of an 18–month shutdown between 2009 and 2010 during what could be described as a difficult time for paladars to operate because of the Cuban government’s interference, the restaurant has operated continuously and has no plans of slowing down. They have announced a fairly ambitious plan to continue to renovate the building and add a cocktail bar among other amenities.

The paladar has played host to many celebrities and dignitaries from around the world, and the walls in its entryway are filled with pictures of those who have dined there. The building in which the paladar sits was also the central setting for the 1993 movie Fresa y Chocolate, an Oscar-nominated film that tells the story of two opposite men and how they learn to reconcile their differences of politics, sexuality and outlook on life, and there are nods to the movie throughout the space.

As my party and I were waiting to be seated, someone mentioned to me that they saw a man come out and grab a cigar out of a box that was sitting on a side table. The man was Enrique Núñez del Valle, the proprietor of the paladar, and the box turned out to be one of the cigar books that has been used for the Colección Habanos series since 2001. Inside were a handful of bandless cigars in a few sizes, and I only had a few minutes to inspect them before it was time to be seated.

As I perused the menu, I noticed that there was a mention of them in the dessert section—I neglected to write down the exact wording, but it was unmistakable that the cigars were an on-the-menu item available for purchase. After we finished our meal and were enjoying some conversation, I asked our waitress about the cigars and she explained that they were indeed for sale and proceeded to bring the aforementioned box to the table so I could select what I wanted. She, along with one of my friends, also suggested that I talk to Núñez about them, since they were something he was involved in bringing to fruition.

He was happy to talk about the cigar, though didn’t want to go into too much detail about its specifics. He said it is based on the Cohiba BHK 52 and that he has commissioned versions that correspond to the BHK 54 and BHK 56. They aren’t made in a traditional factory, but he said they are made by someone who is a skilled roller. Beyond that, details are a bit cloudy, and several follow up e-mails seeking additional details have gone unanswered. I doubt that you could pass this off as an unbanded Cohiba Behike, but that’s not so much a knock on this cigar rather a compliment to the other and its generally very beautiful wrappers. The La Guarida BHK52 shows a bit of roughness at the foot, while the wrapper is just a bit darker than the Behike’s and doesn’t offer the same kind of cosmetic beauty. Veins are minimal but noticeable, and the cigar has varying amounts of give along its length. The pre-light aroma is at first light and bakery sweet with a bit deeper notes of white bread come along. The pigtail cap also seems a bit rushed, and the cap itself lacks the traditional three seams, and a swift clipping of the cap with a pair of cigar scissors dislodges almost the entire assembly. The cold draw is definitely on the firm side: shy of frozen milkshake but the resistance is unmistakable.

The first few puffs are warm and fuzzy, not particularly spicy or flavor driven but upfront with a medium-bodied smoke and strength. An early retrohale offers just a bit of pepper that proves enjoyable without being overpowering. There is a struggle to put more descriptive words to the La Guarida’s flavors other than what I have heard numerous times from both farmers and blenders: it just tastes like tobacco. What does strike me is how dark the ash is; at some points it is near pure black and stands out as some of the darkest ash I can recall seeing. That first clump of ash hangs on for over an inch before crashing to the ground, with the cigar holding steady on its flavor course. 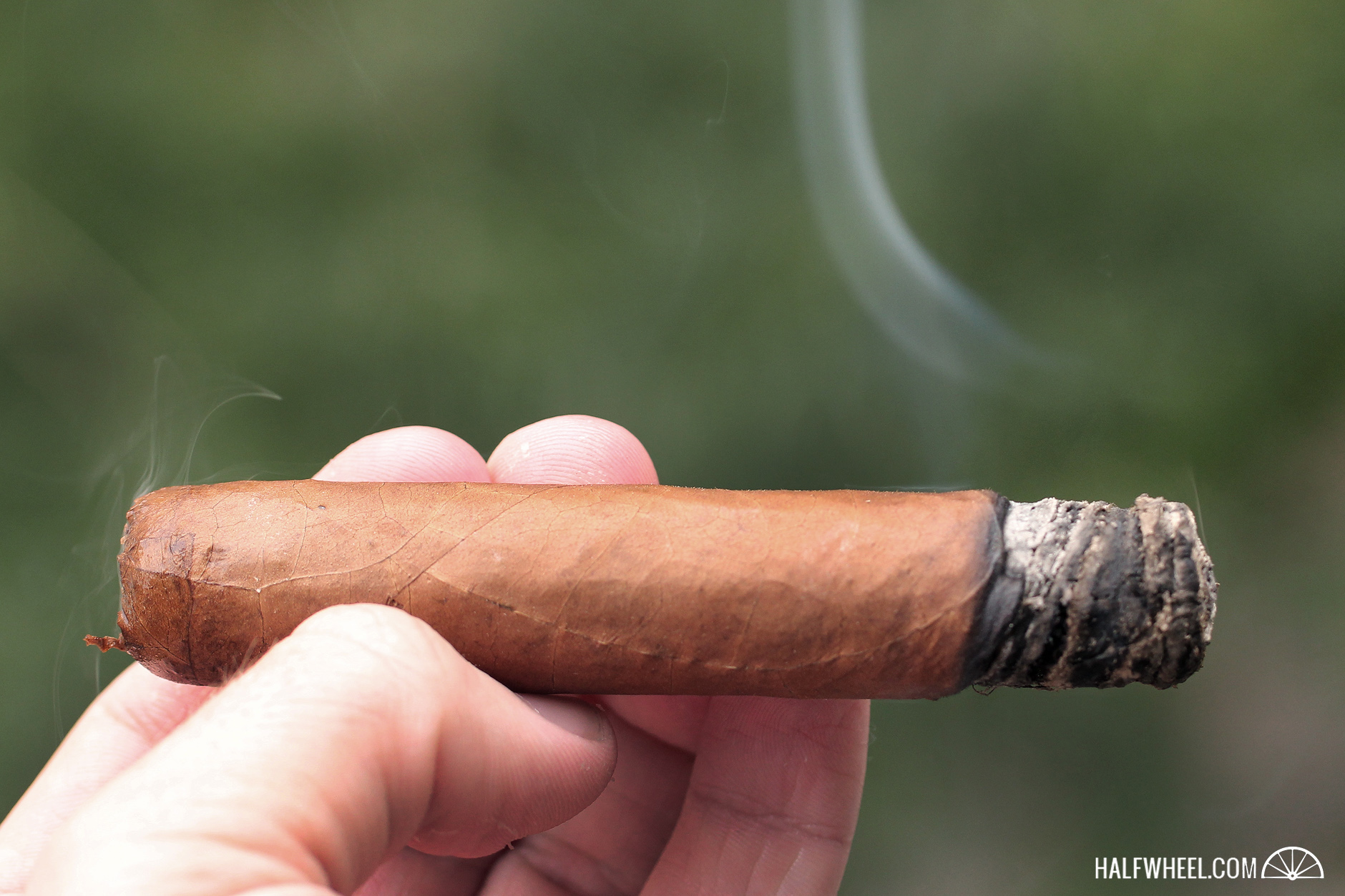 There isn’t much of a flavor shift in the La Guarida from where it started and it remains a solid medium-bodied cigar with minimal amounts of spice and an enjoyable if somewhat nondescript flavor profile; something that I wouldn’t necessarily have minded if I had smoked this right after dinner when my palate was recovering from an incredibly flavorful meal. When the burn line, which has been razor sharp to this point, crosses the halfway mark of the cigar the flavor seems to wake up a bit with the addition of a touch more pepper and the fuzziness of the smoke giving way to a bit of wood. It’s not a drastic shift by any sense, but it is a shift nonetheless. The aroma also continues to become a bit more definitive, again with the leading thought being that it just smells like tobacco, but also with a few of the same wood notes present. A retrohale at the transition to the final third offers just a touch more pepper but remains relatively tame. The subtle flavor shift that carried some hope that the second half of the La Guarida would see further developments didn’t prove to deliver; instead the cigar held its ground and remained fairly non-descript though perfectly smokeable and enjoyable. There isn’t even much in the way of subtleness to be picked out, rather there just aren’t many distinct flavors to be found other than just straight tobacco, which leaves me longing to find some kind of verbiage to describe it. There has yet to be a note of harshness that suggests the tobacco hasn’t been cured or processed properly, and there are certainly no visual indications that would suggest that either. The tightness of the draw becomes a bit of a factor in the final inches as the burn rate slows and asks for a touch up, but the smoke remains plentiful and the burn line sharp. A touch of heat comes into the equation in the last inch and a half as the cigar completes in enjoyable if yet uneventful journey. I really had no expectations of this cigar, save for some faint hope that this might echo the notes of the Cohiba Behike at a much, much lower cost. It didn't, but that's almost a moot point. While the cigar was very enjoyable, it simply doesn't stand out amongst it peers either on or off the island due to a lack of transitions or depth of flavor, earning it the score it does. Yet were you to smoke this after dinner at La Guarida, either in the restaurant or in the hopefully soon to be completed cigar lounge with a full belly, a glass of rum in hand and hopefully a group of friends to share the experience with, I have a hard time thinking you would find anything to complain about.