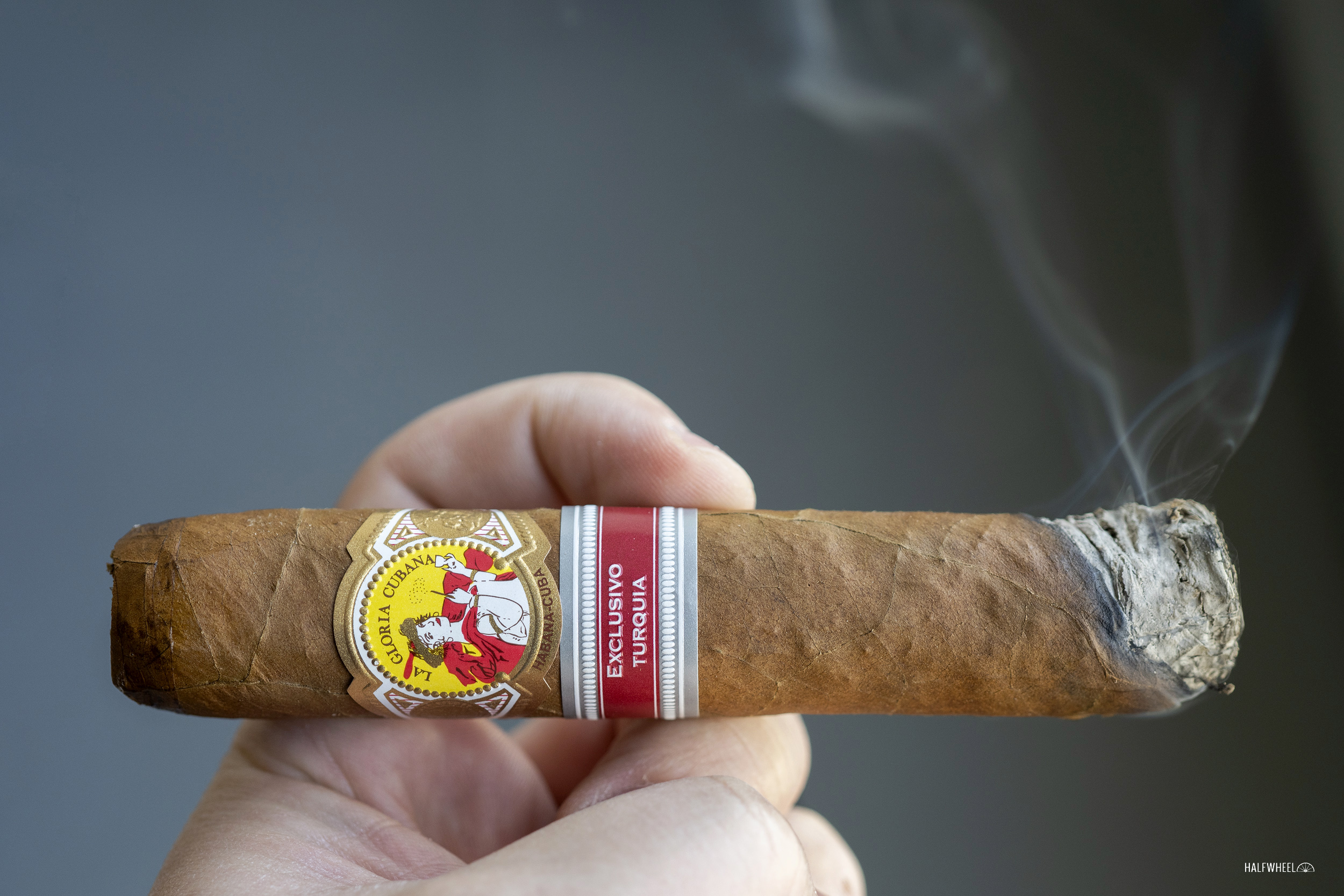 I spend quite a bit of time trying to make sure that none of halfwheel’s reviewers are reviewing the same brand of cigars consecutively. Typically that means trying to make sure that a brand doesn’t have its cigars reviewed by the same reviewer twice in a row. Every once in a while that happens, but an even rarer occurrence is to have consecutive reviews from a particular reviewer be of the same brand.

This is my second review in a row to be a La Gloria Cubana, but it’s not from the same brand.

Of course, that is because there are actually two very different La Gloria Cubanas. One of them is sold only in the U.S., a brand owned by Scandinavian Tobacco Group and sold by Forged Cigar Co. Then there is the brand being reviewed today, the Cuban La Gloria Cubana owned by Habanos S.A. which is the La Gloria Cubana cigar sold in every country that is not the United States. 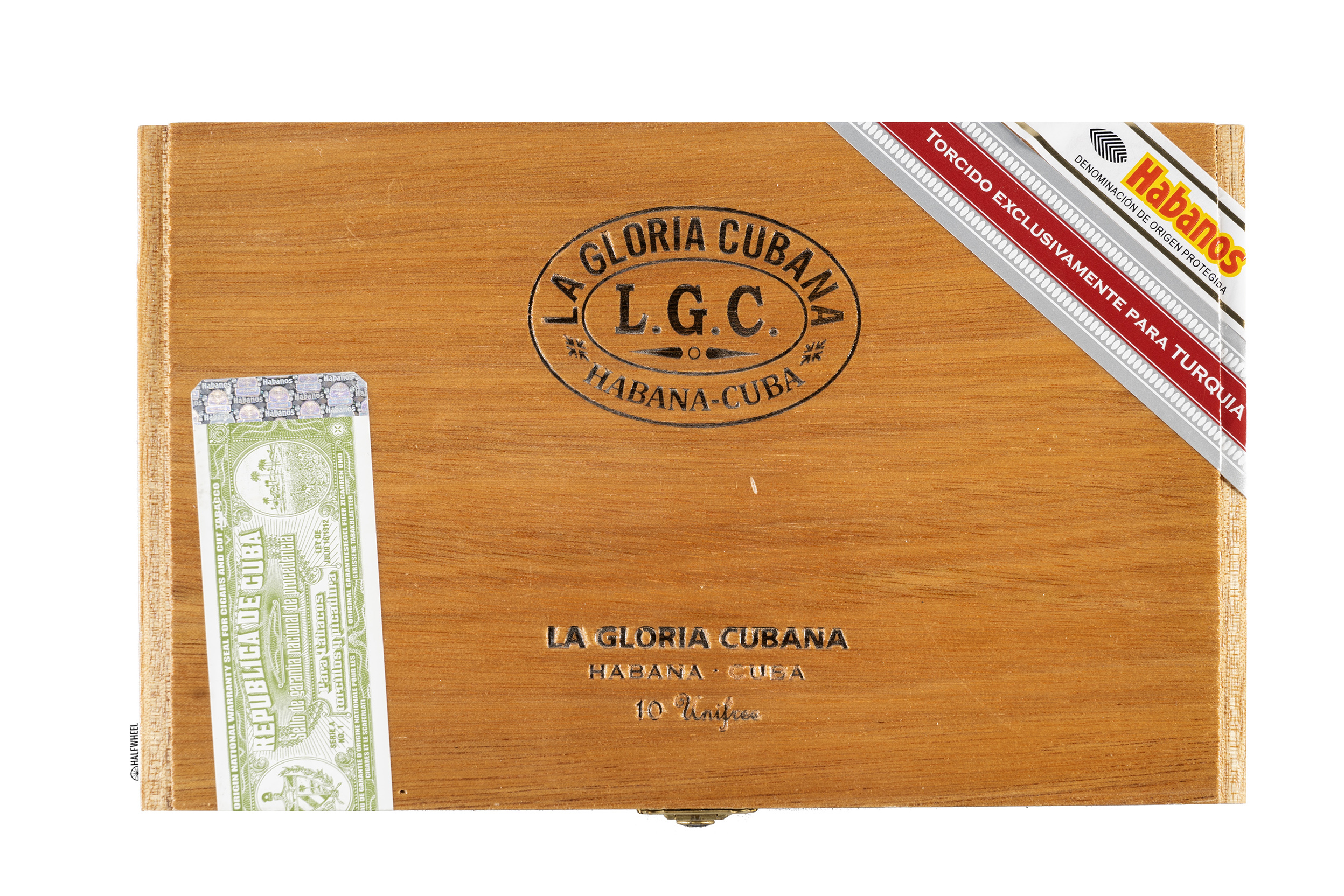 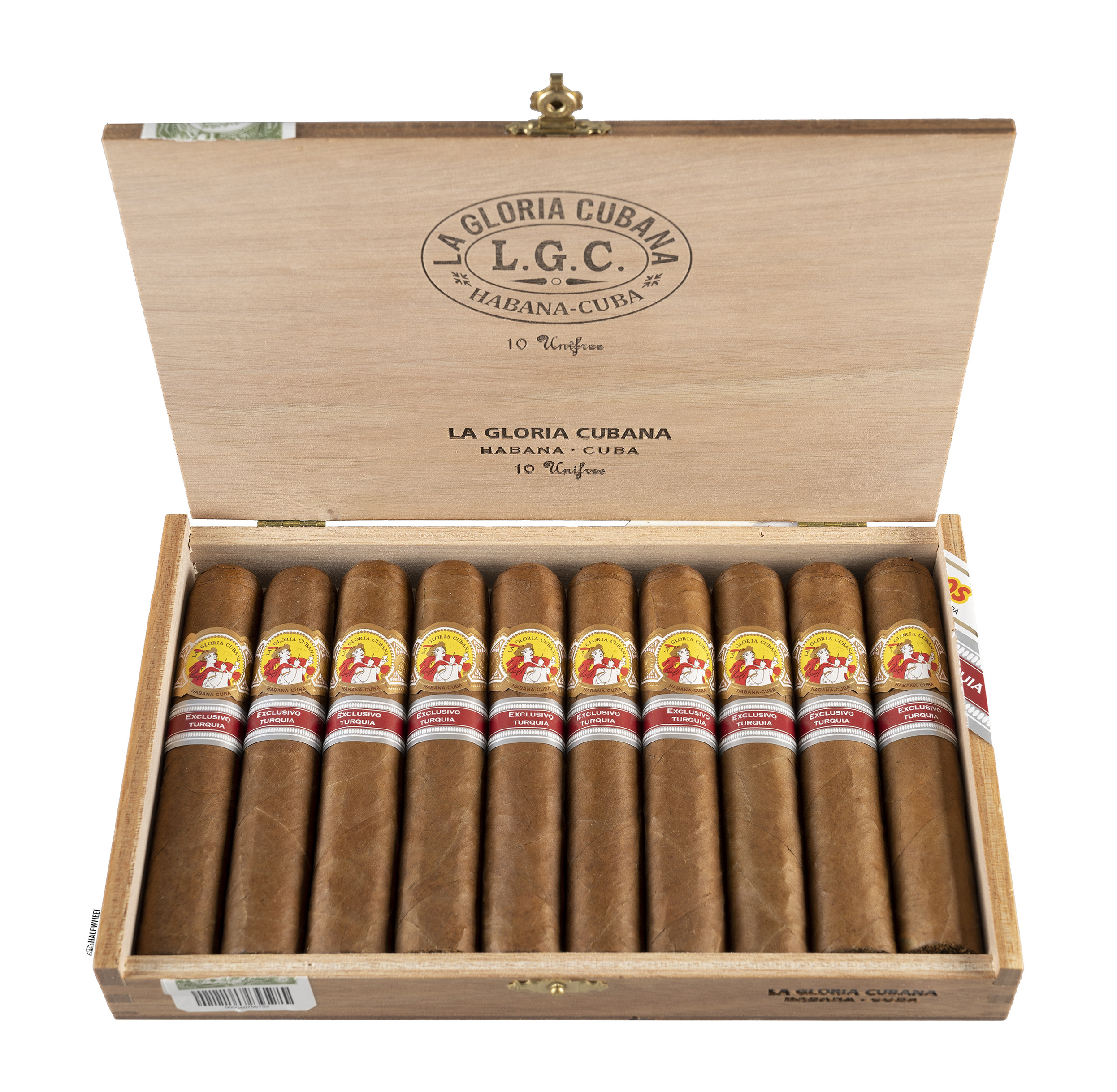 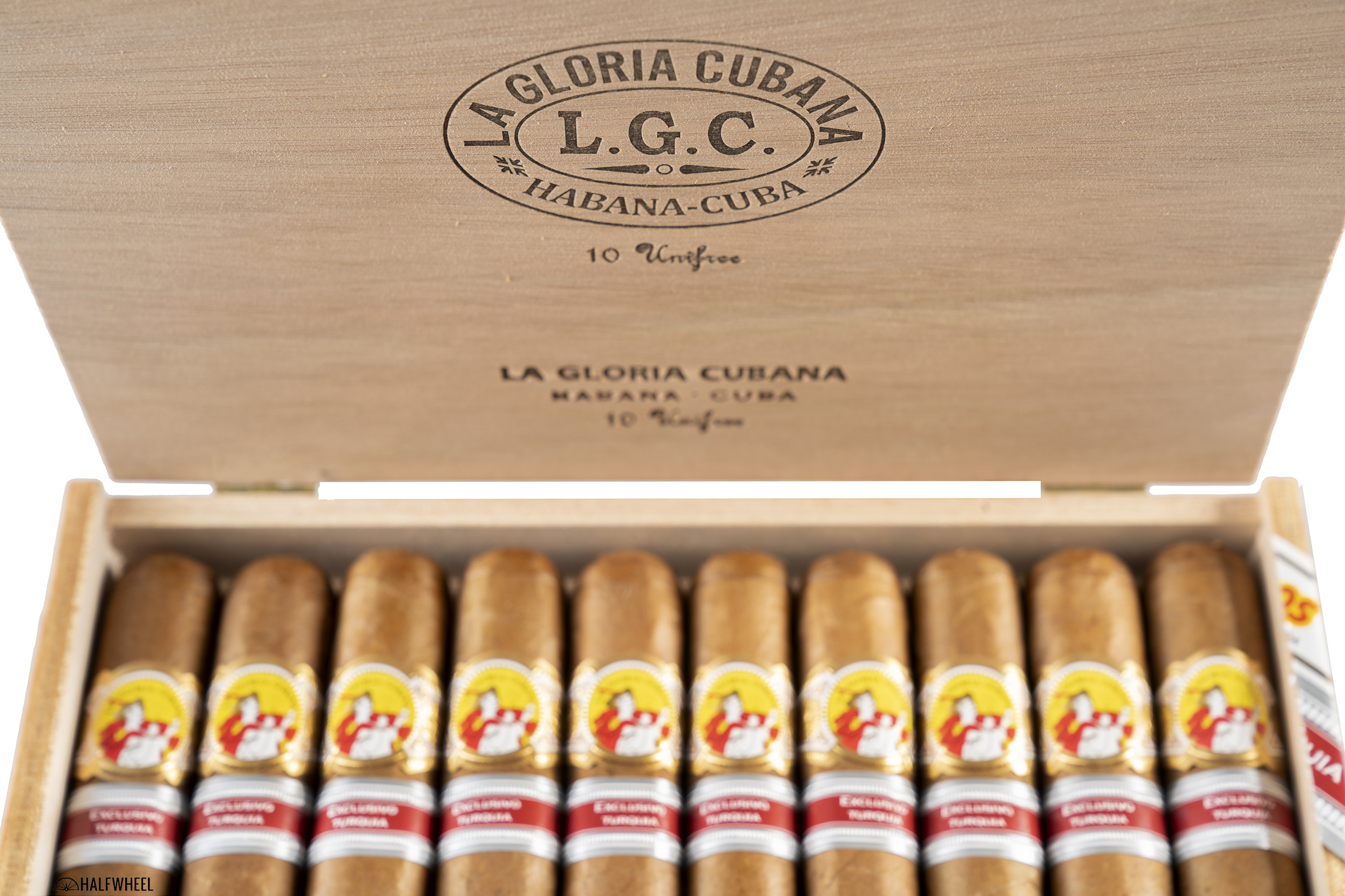 Today’s review is the La Gloria Cubana Unifree, a 5 1/8 (130mm) x 55 Edición Regional release for Turkey. The vitola is known as montesco, and while there have been over a dozen different cigars made in this vitola, it is probably best known as the size of the Romeo y Julieta Wide Churchills.

For those unfamiliar with the Edición Regional series, the basics are as follows:

More recently, with little exception distributors are restricted to a single Edición Regional release per year. That being said, many of the releases don’t actually ship until one or two years after their planned year.

If you are thinking that a La Gloria Cubana in the montesco vitola as an Edición Regional sounds familiar, it’s because it is. In 2016, Habanos S.A. released the La Gloria Cubana Revolution as an exclusive for the Asian Pacific region. 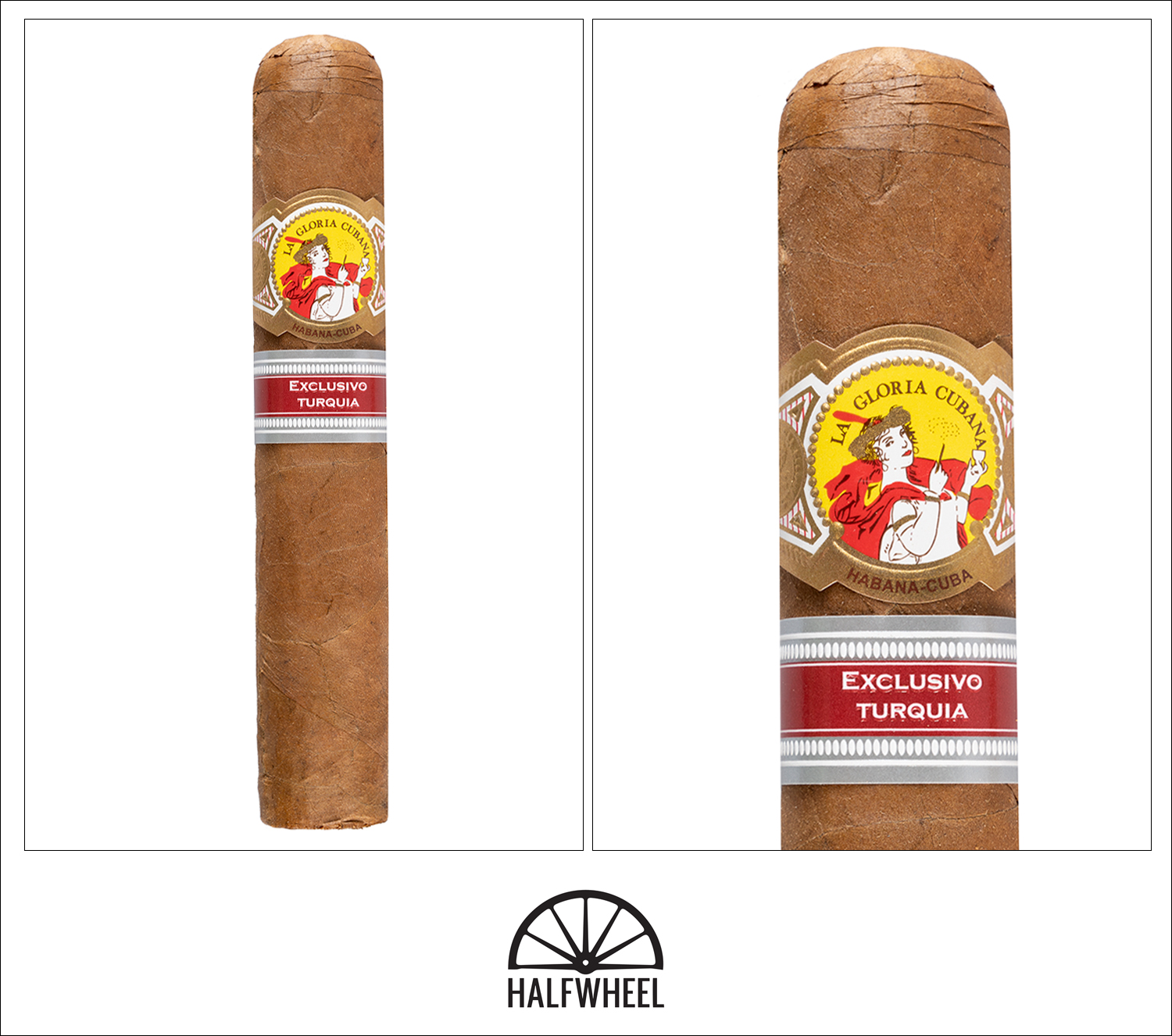 Color-wise, this is a very pretty box of cigars with great uniform color and a decent amount of oil. What stands out is a bit of a weird press that runs across just the top each cigar, a result of how tightly these cigars are packed in the box. It almost looks like one of the more unique box-pressed cigars from Plasencia, albeit the rest of the cigar is round. There are some noticeable veins, but it’s not too bad in the grand scheme of things. I am concerned once I run my fingers up and down the cigars’ lengths as there are some noticeable hard spots on all three cigars and a noticeable soft spot on one cigar. The aroma from the wrapper of the La Gloria Cubana is medium-plus with barnyard, nuttiness and saltiness. The foot of the cigar is sweeter and strong, around medium-full, with aromas of peanuts, blueberry muffins and a bit of pine. Despite the issues with the hard spots, air movement on the cold draw is fine. There’s a vibrant Corn Flakes flavor joined by floral, grains and some white pepper.

The La Gloria Cubana Unifree starts with a great mixture of nuttiness, earthiness, grain cereal and some mineral flavors. Unfortunately, the draws on each cigar are tight. The nuttiness stands out above the other flavors of black pepper, earthiness, tastiness and an underlying sweetness, though one cigar is noticeably sweeter. The finish has oatmeal cookie-like flavors, nuttiness, a lemon-like sweetness, cedar and creaminess. Retrohales have flavors of oatmeal cookie, cocoa, toastiness, nuttiness and a complex meaty flavor. The finish is more savory than the initial retrohale with earthiness adding itself into the mixture to join the meatiness, nuttiness and a generic sweetness. Flavor is medium-full, body is medium-full and strength is medium. All three cigars have tight draws, though one cigar is much better than the other two. On the inverse, one cigar starts cracking down the body of the wrapper, though the draw doesn’t open up. Touch-ups are needed on two of the three cigars.

While there are certainly changes in the second third, the story is more or less the same: the flavor is good, the construction is not. Flavor-wise, there’s a mixture of creaminess and nuttiness leading the way on top of some earthiness and leather. It leads to a finish of mustard, earthiness, leather, creaminess and some black pepper. Retrohales have nuttiness, more mustard and a cola-like sweetness that is buried deep into the profile. Like the first third, the Unifree’s retrohale is similar but less sweet. It has flavors of bread, mustard, a mint-like sensation and a restrained pepper flavor. Every other puff it seems like the pepper wants to come to life, but it never really increases. Flavor is medium-full, body is medium-full and strength is medium. The draw is still tight, though it gets better on two samples. Unfortunately, it’s tight enough that touch-ups are needed. The final thirds of the La Gloria Cubana are all over the place. One sample is a predictable progression, but the sample that has cracking issues is struggling. For whatever reason, the touch-ups on that sample have taken a unique tough toll on the profile and have turned the flavor into a charred mess. The final sample is strange because it suddenly goes out due to a tightening draw. Oddly, once the cigar gets relit not only is the draw better, but so is the flavor. There’s a familiar nuttiness, floral flavors, raspberry and peanuts. It finishes with peanuts, some damp earth flavors and a bit of white pepper. Retrohales produce saltiness, bread and white pepper. It’s tough to pick up any changes in the finish of the retrohale, though that damp earth flavor is now present. Flavor and body remain medium-full and strength keeps at the medium level. Touch-ups and tight draws continue to be problems, something that I imagine also applies to the other seven cigars in the box we purchased. Cigars like this are why the Edición Regional series inspires so much frustration amongst the halfwheel staff. While it is very possible to buy a regular production Cuban cigar with the same issue—tastes good but has a bad draw—the Edición Regional cigars oftentimes produce the same results at much higher price points. For about the same money, you could buy a box of 25 Romeo y Julieta Wide Churchills and I'm guessing the results would be better. Not because the Wide Churchills is inherently a better cigar, just that your odds of finding 10 of them that were bunched properly will likely be higher. The three Unifrees I smoked showed tons of promise flavor-wise but about zero promise when it came to the draw.