They appear all throughout society, whether it stems from a new type of technology, a phrase coined by the media or a public figure, or just something that is pushed forward to bring new life to a stagnant product or sector.

That certainly wasn’t the case back around 2010 when Habanos S.A. released the Cohiba Behike BHK line, as Cuban cigars were selling just fine, and a premium Cohiba release—much like today—didn’t sit on store shelves all that long. As the line garnered critical acclaim and people started digging into just what was making the blend so good, a new phrase entered the cigar smoker’s lexicon: medio tiempo.

It’s not a new seed, it’s not even a varietal of seed, and it’s not even really a new thing, as what was dubbed medio tiempo had existed long before the Behike. First, the name translates as half time, an interesting one that doesn’t really explain things. Medio tiempo refers to a very specific pair of leaves that grow on some tobacco plants, and which grow at the very top priming above what is referred to as ligero. The leaves are smaller and thicker than the rest of the ligero, as well as being stronger in flavor. But again, medio tiempo is almost the result of the sorting and classification process as it is botany and agriculture.

Now, 11 years after the Behike line debuted and medio tiempo started getting buzz, the phrase is still being used for new releases, in particular the La Gloria Cubana Medio Tiempo line.

“The artisans of El Credito set out to highlight a rare tobacco leaf with ‘Medio Tiempo’ and ultimately delivered another fine example of their masterful blending techniques,” said Steve Abbot, senior brand manager for La Gloria Cubana, in a press release. “All of the tobaccos that comprise this new collection are interwoven to perfection, and together, they tell a memorable story.”

It began shipping to retailers in early May. I’m still not used to being the La Gloria Cubana band done in black, gray and silver, but it looks very good here. The image is crisp and detailed, and while the Medio Tiempo font might not be my favorite, the overall impression is still quite favorable. The band sits atop a rather dark brown wrapper, with a light mottling that takes it even darker in spots. There is a fairly big vein on each cigar that disrupts the flat seams, but in terms of construction each sample looks good. The dryness of the leaf varies a bit, as two samples offer oils to the eyes and fingers, while one offers oils to neither. Having just smoked a couple of gordos, the toro vitola feels rather slender, but it is still a good amount of cigar. It’s rolled rather firmly and capped well, with one sample’s head construction a tick bit below average but still very acceptable. The aroma off the foot is quite impressive, subtle at first with a bit of sweet meatiness before blossoming into something that tingles the nose with some light pepper while showing impressive complexity. The sweetness turns into a light, fruity and chilled red wine, while the meatiness allows for the rawness of that aroma to develop. There are varying amounts of sharp black pepper, and I’d argue that given the other aromas, things are best when pepper is at a minimum. The cold draw is good as far as airflow but not as engaging as the aroma. The flavor has a bit of the sweetness, with a drier complementary flavor that doesn’t stray too far from the generic taste of tobacco, and a bit of wheat toast showing up as well. Two samples have a bit of the rare meat flavor, which is definitely to the benefit of the experience.

The first puffs of the La Gloria Cubana Medio Tiempo Toro are a bit disjointed; there’s the taste of some strong tobacco, some sweetness, a bit of earthiness and some requisite pepper, but they aren’t in any sort of harmony. It’s something I’m willing to attribute to the medio tiempo, a strong flavor that can make for a more challenging first flavor. That changes fairly quickly and consistently by the time the burn line is half an inch in, as the sweetness finally herds the cats, rewarding the palate with a dense sweetness that has me thinking of strawberry jam, from which then cascades the earth and pepper, the latter lingering on the tongue with a gentle tingle. Retrohales are also fairly bright, with pepper the first and most dominant sensation, enough to have me temper my frequency just a bit. I smoke the third sample a bit slower, which seems to soften the overall flavor a bit, something I was curious about given the intensity of the flavors thus far. Flavor deserves a dual rating, as the first pass of smoke is medium, while the finish is almost full. Body and strength are close to medium as well, with the latter seemingly headed up the scale.

The idea of having medio tiempo tobacco in a cigar’s blend immediately makes me think that it will be a strong cigar, though I can’t say that is the case thus far, at least as far as effects below the palate. However, it seems like the medio tiempo tobacco is definitely standing out from the rest of the blend, delivering a more concentrated expression of black pepper and a thick, subtle sweetness that simply isn’t found in the majority of cigars on the market. That potent pepper also appears in the retrohale, and while it is a touch lighter than it is on the tongue, it is brighter and crisper through the nose. But where the La Gloria Cubana Medio Tiempo Toro keeps focusing my attention is a spot towards the back of my tongue where the most intense flavor keeps settling. Even as the surrounding flavors come and go as they do in this section, that physical sensation remains. There is still an impressive creaminess to the profile, and at times something subtle that reminds me of matcha, though its fleeting nature doesn’t allow my taste buds to lock onto it. There’s also flirtations with a bit of dry woodiness and a touch of sandy soil as the flavor’s depth changes, and it’s seemingly more about the physical sensation than offering a depth of flavors to explore. There can be a bit of sharpness around the midpoint, with a slight metallic twinge to boot, but it’s more that the majority of the components have sharpened up when smoked at a normal rate, from the wood to the earth to the pepper, pretty much everything but the pepper which remains prominent. Flavor has settled into a medium-full profile, though the finish remains closer to full with its prolonged effect, while body and strength are both medium-plus. 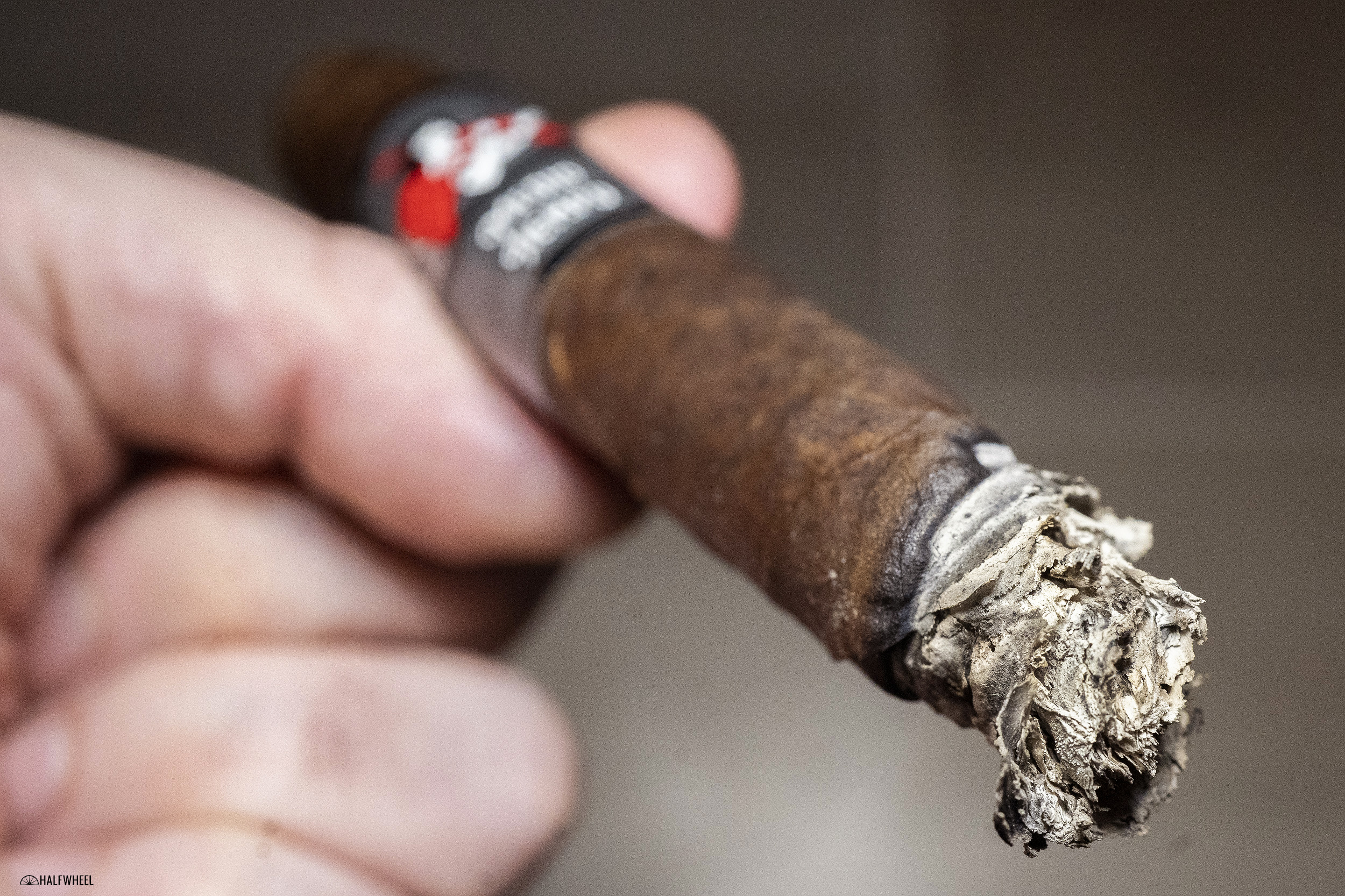 The final third of the La Gloria Cubana Medio Tiempo Toro reintroduces the sweetness to the profile, a thick, tongue-coating sensation but nowhere near a dominating flavor, and certainly not one that would suggest that anything has been sweetened. After a bit of a subdued second third, there is more earthiness back in the flavor, a bit more middle-of-the-road pepper that tingles the front half of the tongue, with a bit of dry wood filling in the gaps. The evolution continues with a bit more of what I generally refer to as a robust profile; while the first and second thirds had a decent bit of smooth creaminess to them, it is no longer present here, leaving the sensation of the smoke as it crosses the taste buds to be a bit more textured. Much like the first few puffs were a bit disjointed, the final third undergoes the same sensation, and while the final inch or so isn’t sharp, there is a more pronounced flavor that seems attributable to the medio tiempo, as it is a concentrated sensation of pepper with just a touch of the sweetness found earlier. The cigar finishes medium-full, body is medium-plus, and strength has quietly snuck up to medium-plus as well. Construction remains very good and finishes without issue, with smoke production increasing in the final third to a near room-filling level. The selling point of this cigar might be its biggest drawback, in that medio tiempo—and really any strong ligero—challenges the palate with an intensity of flavor not found on most cigars. In this case, it's Connecticut-grown habano, which already has me thinking it's going to be fairly strong, and then tack on the medio tiempo designation and I'm almost certain it will be. It’s not overpowering, it’s not what I would even call aggressive, but it is consistent and very noticeable. If you're not a fan of that kind of flavor and sensation, this might be one to skip. That said, if you want to try a cigar that should show you pretty clearly just what medio tiempo adds to a blend, this is a pretty decent option, and one that comes at a pretty reasonable price. But beyond that, it's also a very enjoyable cigar and far from a one-trick smoke. There are very good supporting flavors, noticeable and logical transitions, and generally very good construction and combustion. This cigar delivers more than just an buzz word on its band, it delivers an impressively enjoyable smoke.