At the end of each IPCPR/PCA Convention & Trade Show, the four halfwheel writers that cover the trade show are asked to write a list of our “top three things.” These could be the three most interesting, three most impressive, three most exciting, etc. I’ve never really put a guideline about, just the three things you saw that stood out most to you.

I’ve mentioned over the years that most years, accessories are the things that stand out most to me. That’s largely because cigars are made to be smoked and I smoke so few of them during the trade show, it’s tough to get excited about them. That said, at the conclusion of the 2021 PCA Convention & Trade Show, the La Galera 85th Anniversary made my list.

Technically, it’s two cigars as part of one release, a concept that has been done before. What made the La Galera 85th Anniversary stand out to me is that the cigars had a somewhat unique back story. José “Jochy” Blanco—the owner of La Galera and the Tabacalera Palma factory that makes the cigars—blended one of the cigars. His son, José Manuel Blanco, blended the other, the first time a cigar the younger Blanco blended is being sold to the public. What’s even more interesting is that Jochy’s blend was inspired by his father, Don Nanán, who is also José Manuel’s grandfather. In total, three generations of cigar makers are represented in a single release, which celebrates the 85th anniversary of the Tabacalera Palma factory.

“When we sat down to think of ways to accurately convey what this occasion meant to us, we both decided to consult our fathers,” said José Manuel Blanco in a press release last year. “My father revisited dozens of scribbles and stand-alone paragraphs in my grandfather’s notebooks and reexamined the tobacco growing and processing wisdom of two generations, along with the cigar manufacturing wisdom of one generation. I borrowed my father’s wisdom after bribing him with some cheap whiskey.”

“My father’s blend was inspired by my grandfather, Don Nanán, who loved Connecticut wrapper almost as much as his nine children,” said the younger Blanco. “He combined decades of unused blending techniques with Dominican seed tobaccos and produced a traditional Dominican cigar made with corojo binder, with Piloto Dominicano and Criollo 98 filler from our Jacagua and Gurabo farms, giving it the typical raisin and nutmeg notes of Dominican tobaccos.” 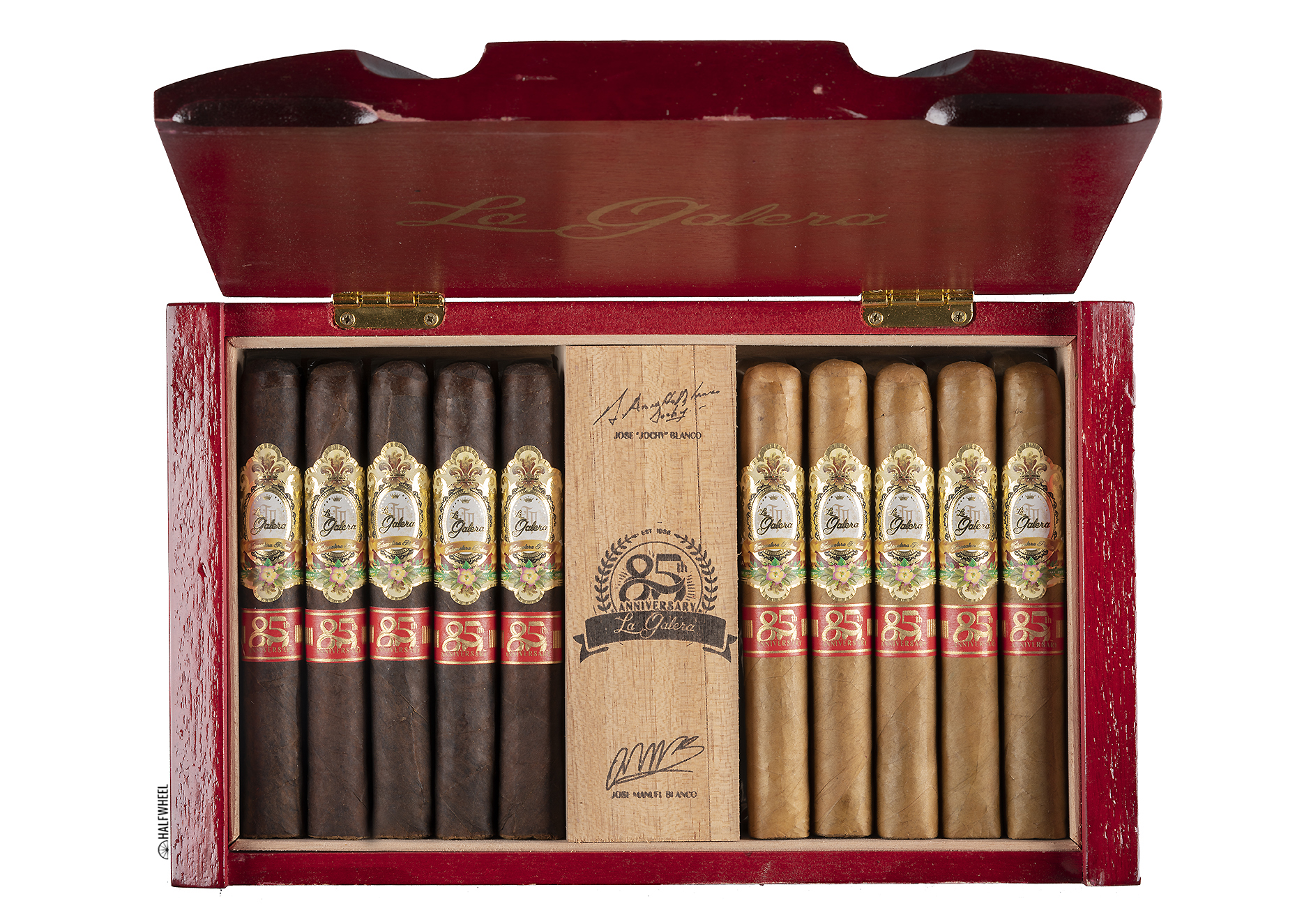 The end result is José Manuel using a Connecticut broadleaf wrapper, while Jochy’s blend uses a Ecuadorian Connecticut shade wrapper over a Dominican corojo binder and Dominican pilot cubano and criollo 98 fillers. All of the fillers were grown on the company’s Potrero and La Canela farms.

Given that the 85th anniversary was last year, there were 2,021 boxes of 20 cigars—10 of each blend included—with the MSRP set at $14.50 per cigar. The lids of the boxes are also designed to function as ashtrays. This has a lighter shade of yellow than many Ecuadorian Connecticut wrappers, though it’s not something that stands out as American-grown Connecticut shade wrapper to me. The cigars appear well-rolled and there’s no visible damage, though it’s tough for the wrapper to hide the veins. That said, looking at the picture above, it seems the veins are much more obvious to my eye than my Sony camera. The aroma from the wrapper is medium-plus with hay, earthiness, leather and a touch of something that reminds me of paste. The foot is a bit stronger and sweeter with ginger, ammonia and some floral flavors underneath. Cold draws of the La Galera 85th are medium-plus with a soft bread flavor, creaminess, touches of a manure and a flavor like a very oily cured meat like pepperoni.

On a very clean palate, the first puff delivers flavors of cedar, creaminess, some lemon muffins and a touch of black pepper. As the first third hits it stride, the profile is led by a weird creamy flavor over dry woods, a pear-like fruitiness and some acidity. The finish is led by a sweeter creaminess over blueberry muffins and some burnt flavors. Retrohales have earthiness, creaminess, some bread flavors and something that comes to close to reminding me of funky Parmesan cheese. The finish sees the first real kick of black pepper along with cranberry juice and some dry woodiness. Flavor is medium-full, body is medium and strength is mild-medium. Two of three cigars start with flawless construction, another sample is close to that superlative, though the draw is slightly tight.

Nuttiness picks up during the second third of all three cigars, getting very aggressive on one sample. While it’s the strongest flavor, it’s not able to overwhelm the secondary flavors that include something that reminds me of Lay’s potato chips, cinnamon and creaminess. The finish has white pepper over some acidity and nuttiness. It’s rougher than the main flavor, though that’s probably more of an indication of just how smooth the main flavor is. Retrohales have white pepper, brown mustard, some oranges, earthiness and creaminess. Here, there’s a clear separation between the texture of the smoke and how it feels when it just enters and stays in my mouth. Through the nose, I find the texture of the smoke to be a lot rougher. Retrohales finish with a gritty black pepper, red grapes, earthiness, sour cream and a touch of toastiness. Flavor is full, body is medium and strength is mild. Like before, construction is awesome: the burn line is very even, smoke production is massive and the cigar neither gets too hot nor seems close to going out. The La Galera 85th Anniversary Jochy’s Blend is a cigar that can be burned down to last inch and with about an inch-and-a-half left, the profile makes another change. Sourdough bread and creaminess lead nuttiness, a restrained white pepper and a lingering black pepper. By this point of the cigar, there’s still plenty of vibrant flavors but it lacks the smoothness that it once had. The black pepper transitions into the finish, eventually joined by nuttiness, white pepper and citrus. It’s neither as harsh nor as vibrant as the main flavor. I was a bit on the fence in the second third about whether what I was tasting was sour cream or just a weird variation of creaminess. There’s no debate about what’s happening in the retrohale of the final third: sour cream leads lemon, white pepper, a generic creaminess, leather and saltiness. The finish has lemons, sourdough, sour cream and a white and black pepper combination. Once again, I find the differences between the smoke’s texture to be interesting: it’s pretty smooth up until the retrohale’s finish, where the profile feels a bit more velvety—irritating the palate a bit, but finishing smoothly. Flavor is medium-full, body is medium-plus and strength is mild. Construction remains excellent until the end. I don't think this would fall into the profile of new age Connecticuts that have been written about on websites like this and others for the better part of the last decade. While it has full flavors, it lacks the body and strength that I find in many of the other modern Connecticut cigars. That said, it's not missing anything. The La Galera 85th Anniversary Jochy's Blend is an excellent cigar with impeccable construction paired with big flavors. At times, the flavors can get a bit too sharp or too acidic for me, but the flaws are small and could easily smooth out in a month or two.