On the annual multivendor cigar event/festival circuit, there are a few notable ones that stand out, including the Texas Cigar Festival hosted by Ron Lesseraux’s Serious Cigars in Houston. This year marked the fifth installment of the event, and the event has become so high-profile that the more than 600 tickets sold out in approximately seven minutes.

As is the protocol with many of these events, ticket holders receive gift bags full of cigars from numerous manufacturers when they enter the event and the chance to meet and talk with many of the manufacturers, enjoy food and drink, and socialize with other cigar smokers.

In 2013, it was announced that a special cigar was being created by La Flor Dominicana for the event, the La Flor Dominicana Texas Cigar Festival. As I noted in my review of the inaugural edition, there isn’t a lot of backstory about the cigar, other than Lesseraux made a request of LFD’s Litto Gomez to come up with “something special” for the event. Gomez produced 500 cigars for the festival, split among 50 boxes of 10.

While variation in the colors of wrappers is common, the difference between the 2013 and 2014 samples we purchased are stark. It shouldn’t be a surprise that the La Flor Dominicana Texas Cigar Festival has a familiar look and shape; it seems not that long ago that I reviewed the 2013 edition and with the number of limited releases that LFD has issued in the past year or so, it certainly shares a look with many of those. The most eye-catching aspect of the cigar is the small pigtail cap that has been laid flat, and on one sample the edge of the wrapper leaf used for the cap had a black edge that created an interesting visual as it allowed the eye to follow its placement and progression into the pigtail. This isn’t the oiliest La Flor Dominicana I have seen but the sheen is present and familiar, with a bit more mottling in the wrapper than I am used to from LFD’s core lines. The veins are small and seam lines clean, while a closer inspection reveals just the slightest bit of tooth. There is a bit of give at the foot of the cigar but overall it feels firm and well-packed in its box-pressed shape. The pre-light aroma is surprisingly light and bright, laden with notes of peach and green grape, a shock to the senses to say the least, with a touch of fresh cut grass in one that is very enjoyable. The cold draw is near perfect for my liking with just a bit of resistance but air flow that doesn’t feel obstructed. The flavors here are also lighter than I would have expected, showing light wood notes and a sweet orange glaze, with no real pepper present.

The opening puffs of the LFD Texas Cigar Festival ranged from fairly subtle to more on the brash and bold side; both variations contained notes of wood and a touch of light fruit sweetness, though it’s the pepper that swings the pendulum from one side to the other and seemed offer the most variation from cigar to cigar, though it is the milder one that I seemed to favor. It’s not until almost 10 minutes in does the spice or pepper consistently stabilize itself as part of the profile, and even then it is in small amounts. There’s a slight touch of chalk that comes into the equation, both in taste and seemingly in the texture of the smoke, and my early impressions are certainly favorable, minus the fact that there is just enough white pepper in the retrohale to make it hard to truly enjoy. The aroma wakes up about an inch in, delivering a much more fragrant experience that has light notes of mineral and wet chalk before down shifting a bit and showing a touch of soil and eventually pepper that fills the nose but never overpowers it. The flavor also takes on a much more robust note, and there is enough variation in the tobacco to really kick it into a note of slightly charred earth that has a tendency to really work the palate. The ash is a bright white when first revealed, slowly graying as it cools and revealing some tight layering that holds on decently but almost on cue breaks off at the one-inch mark, just like last year’s version. The burn line in the early goings is crisp and even, while the draw remains about as smooth and dialed in as I could ask for. While the cigar flirted with taking a step towards more pepper, earth and strength as it finished its first third, it has stepped back just a bit heading into the second third, retreating to a more mellower core note of wood with a pinch of soil, medium-bodied but unapologetically leaning stronger. Pepper comes back again at the midpoint, first in the nose and then on the palate that brings along a slight shift for the second half. While not going so far as to call it charred, there is a bit more of that type of flavor sensation being picked up, along with just a bit more terroir from the soil. It too backs off though, as the blend seems to be doing this step-and-retreat dance with the strength levels. The burn line gets just a bit wavy in the second third, never really off or requiring a touch up, but enough to merit notation. A retrohale towards the end of the second third is particularly engaging even though the notes aren’t immediately familiar: a bit of chalk and white pepper stand out but the fruit note comes back and provides a colorful undertone that grabs my attention sheerly out of its unexpectedness. 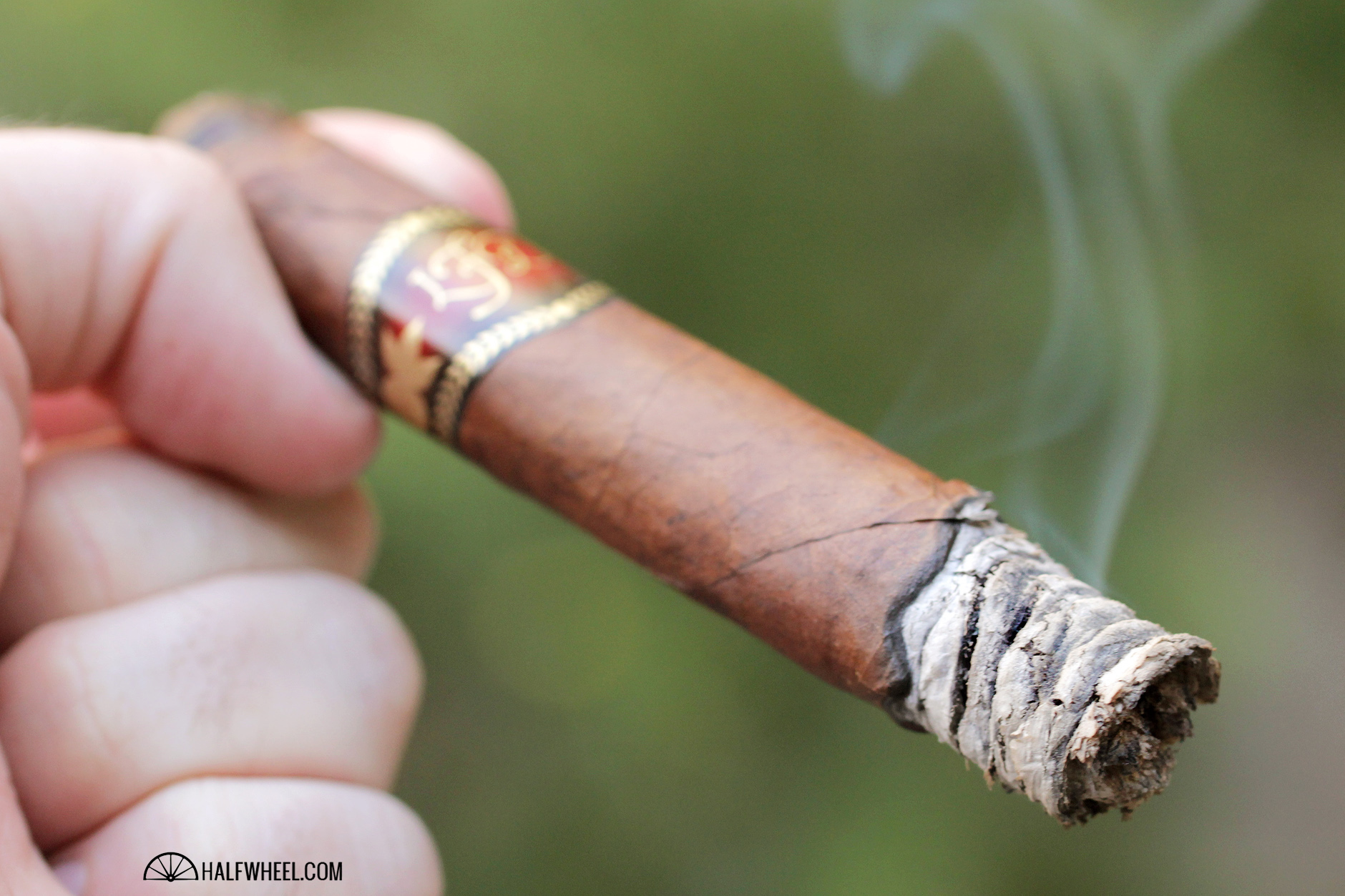 There is yet another subtle but distinct flavor shift in the final third, just shy of where the bottom part of the band would be, as a juicy pork note enters along with a sweet and spicy note that is more detectable in the aroma but blends nearly perfectly with what the palate is getting. The black pepper follows along shortly and now has a much more-earth laden feel: heavier, darker and packing a fuller punch. The added heat from the proximity of the burn line is the only detriment to the La Flor Dominicana Texas Cigars Festival’s performance; it just amplifies the flavors too far into the red zone and even slower, more spaced-out draws can only do so much. Thankfully the cigar has offered plenty to this point that asking for more in the final inch is just being greedy. The initial comparison for this cigar is its predecessor, and at first check I like this incarnation better, though the bit of variation I got from the second cigar leads me to worry just a bit of its consistency. That said, the true notes seemed to stand out fairly consistently, and for a departure from what I think many people would presume the La Flor Dominicana brand to offer flavor-wise, the LFD Texas Cigar Festival 2014 is as good an option as any, with the price making it that much more reasonable and the extremely limited production adding a bit of urgency to get them before they are gone. While I wouldn't say this is an absolute "must try," it is one that I would certainly encourage picking up for a different spin on La Flor Dominicana.