The 2015 edition of the Tobacconists’ Association of America meeting & convention likely set a new mark as far as the group of cigars that are available exclusively to the 80 or so retailer members. There were a handful of new cigars introduced, a very popular cigar was brought back, an interesting new vitola debuted, two companies made complete lines available to the TAA as exclusives, and one company let the members pick the size of the cigar they wanted.

That latter company was La Flor Dominicana; and the cigar is known simply as the TAA 47. Named for the 47th meeting of the group, LFD decided to create a blend for the release but let the store owners pick from one of three vitolas: a 5 1/2 x 52 robusto, 6 x 60, or a 6 1/2 x 54 box-pressed torpedo. The company sent samples to the stores before the meeting, and then brought more samples to the gathering, which was held April 12 – 16 at Casa de Campo in La Romana, Dominican Republic. As it was explained in this story, the retailers would cast their vote for what size they wanted by placing tentative orders for each of the three cigars, but with the understanding that only the cigar that receives the most orders will be placed into production and as such the two other orders cancelled. Once the vote was held and the orders confirmed, the cigars would go into production with a target of having them shipped within 45 days.

While La Flor Dominicana has not confirmed plans to utilize this format again next year, it is expected that the naming pattern will continue through the group’s 50th annual meeting, which means consumers should expect to see a TAA 48, TAA 49 and TAA 50 from the company in the coming years. 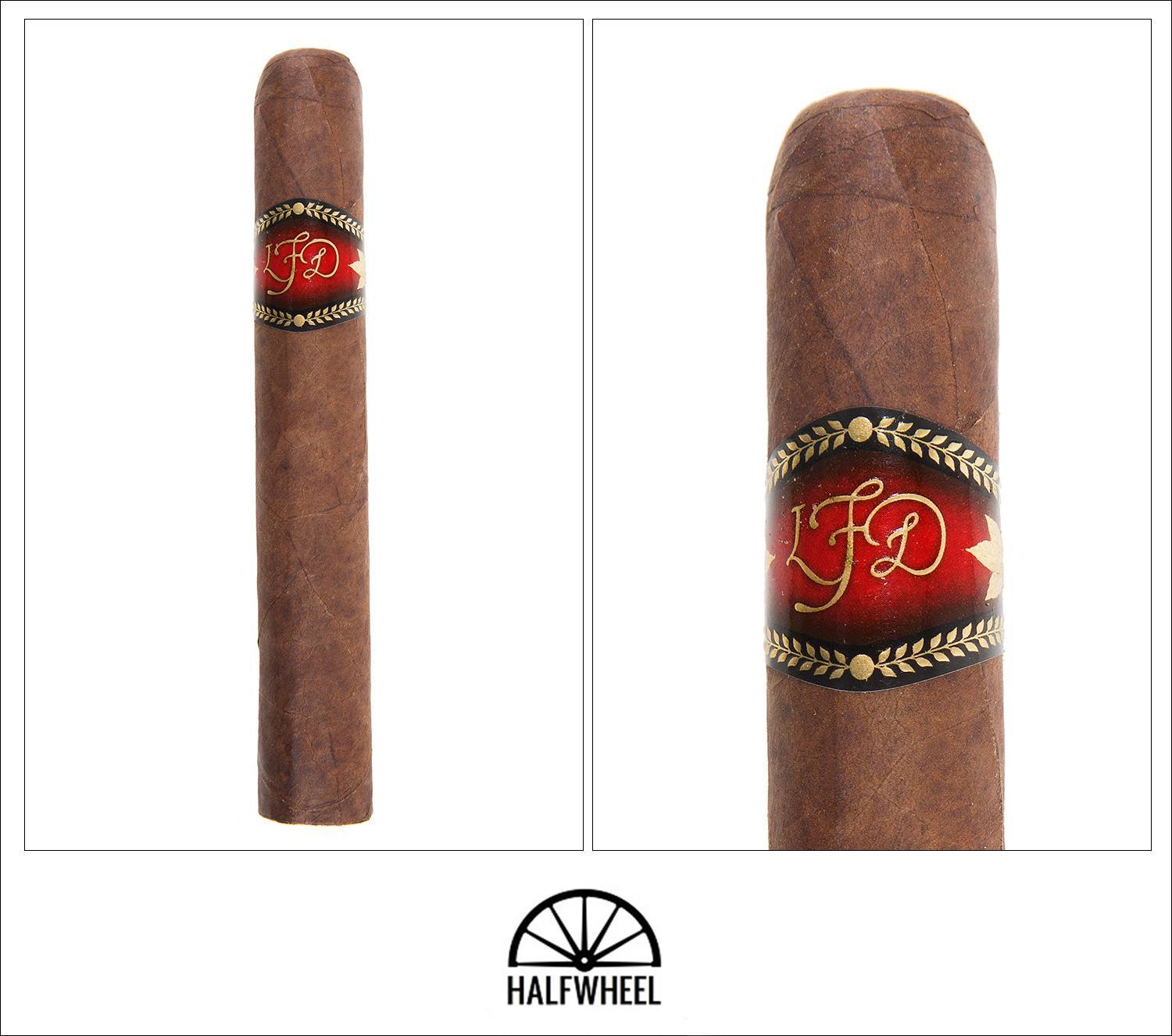 Since this is a prerelease and lacks the banding that will grace the cigars that end up on shelves, I’m not going to say anything about the standard LFD band on this cigar, the same presentation that has been used for a number of smaller releases in recent years. The wrapper leaf has a slight bit of sheen and a wonderful oily texture to it which only enhances its slight variation in color and gives the wrapper a bit of visual depth. The seam lines are clean and there’s a network of very small veins, with the cap applied so neatly it’s almost hard to see its lines. It’s a firm cigar that borders on being hard at points, but nothing off the scales or concerning. From the foot I get a bit of warm, fresh baked pretzel, peanut and cocoa powder, with no appreciable pepper or spice. The cold draw is a bit more interesting, showing a tangy sauce note, almost Worcestershire in a way, while I also get a bit of beef broth and some dry wood, but again no pepper or spice.

There’s more oomph in the first puffs of the LFD TAA 47 than I would have imagined given what I picked up from it before being lit; there’s a gritty black pepper note that jumps out early that starts working on the throat, while a lighter version finds a home in the nose; beginning more with a roar than a bang. There’s plenty of smoke from the cigar, and it doesn’t take long for some subtle changes as the pepper dials back and the aroma turns more towards warm nuts and a slight saltiness fills both nose and palate. By the time the burn line is about an inch along, the pepper has moved to the back of the stage and the smoke has started to become smooth and almost creamy, with touches of charred wood and earth in the background as well to provide it some character. The first clump of ash breaks off cleanly just oven an inch in, and the flavor starts to ramp back up with the peppery note it showed earlier the first to return. 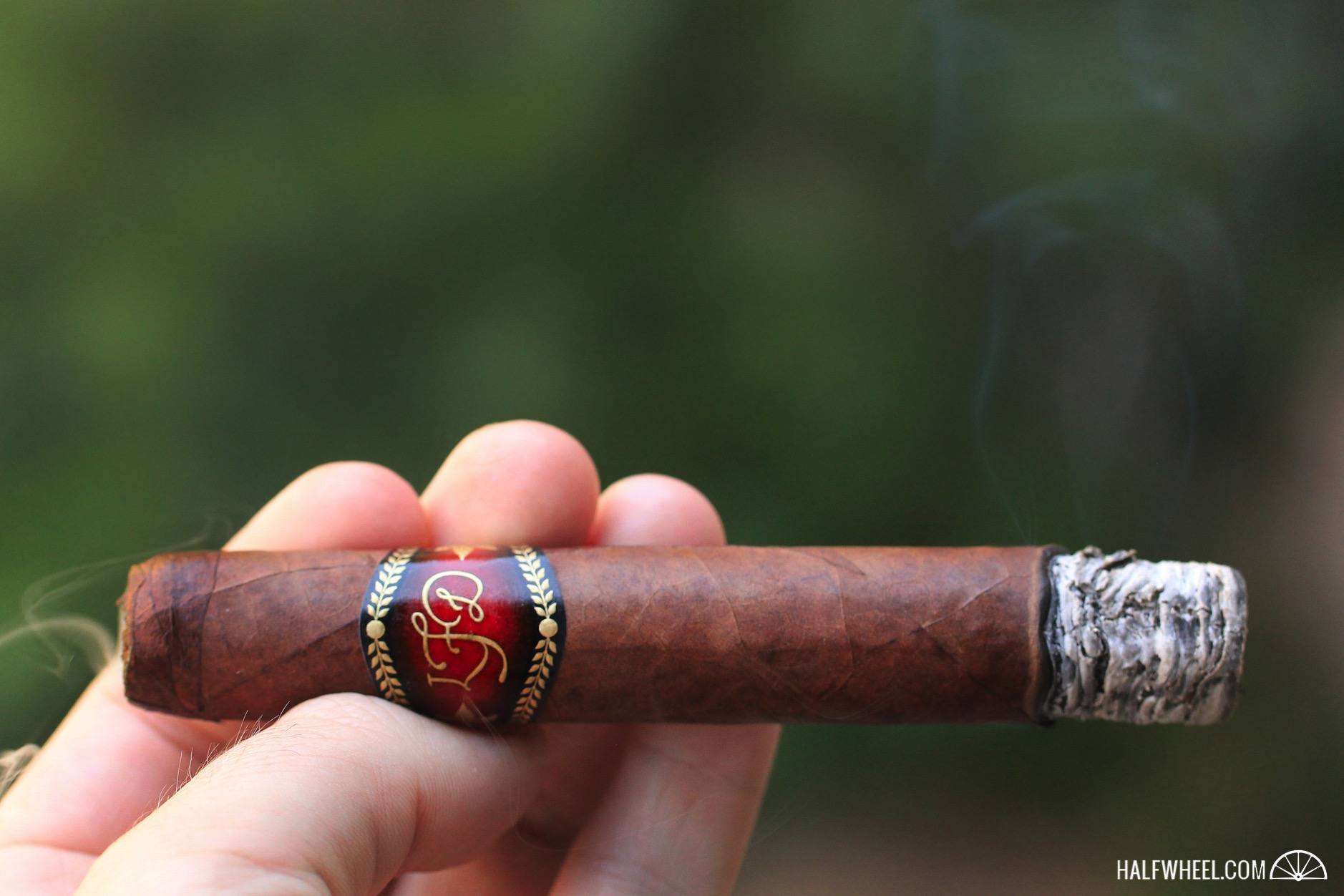 The strength of the LFD TAA 47 has stayed pretty much in the medium to medium-plus range after those strong first puffs, and I’m beginning to pick up touches of earth behind the pepper at the start of the second third. The first half has certainly positioned it as a fairly robust cigar, with no sweetness to be found in any form, but the cigar doesn’t venture too far down the road of being gritty or harsh, though the few times when I get anything along those lines tends to remind me of coffee grounds that get into your cup from an espresso or French press. Past the midway point I’m beginning to get more nicotine from the cigar, and the strength continues to nudge forward into the full category, the combination of which leaves a much more noticeable impact on me. I’m very impressed by the burn line through this point, as it has remained razor sharp and even, with a tight white ash and plenty of smoke produced by the smooth draw. 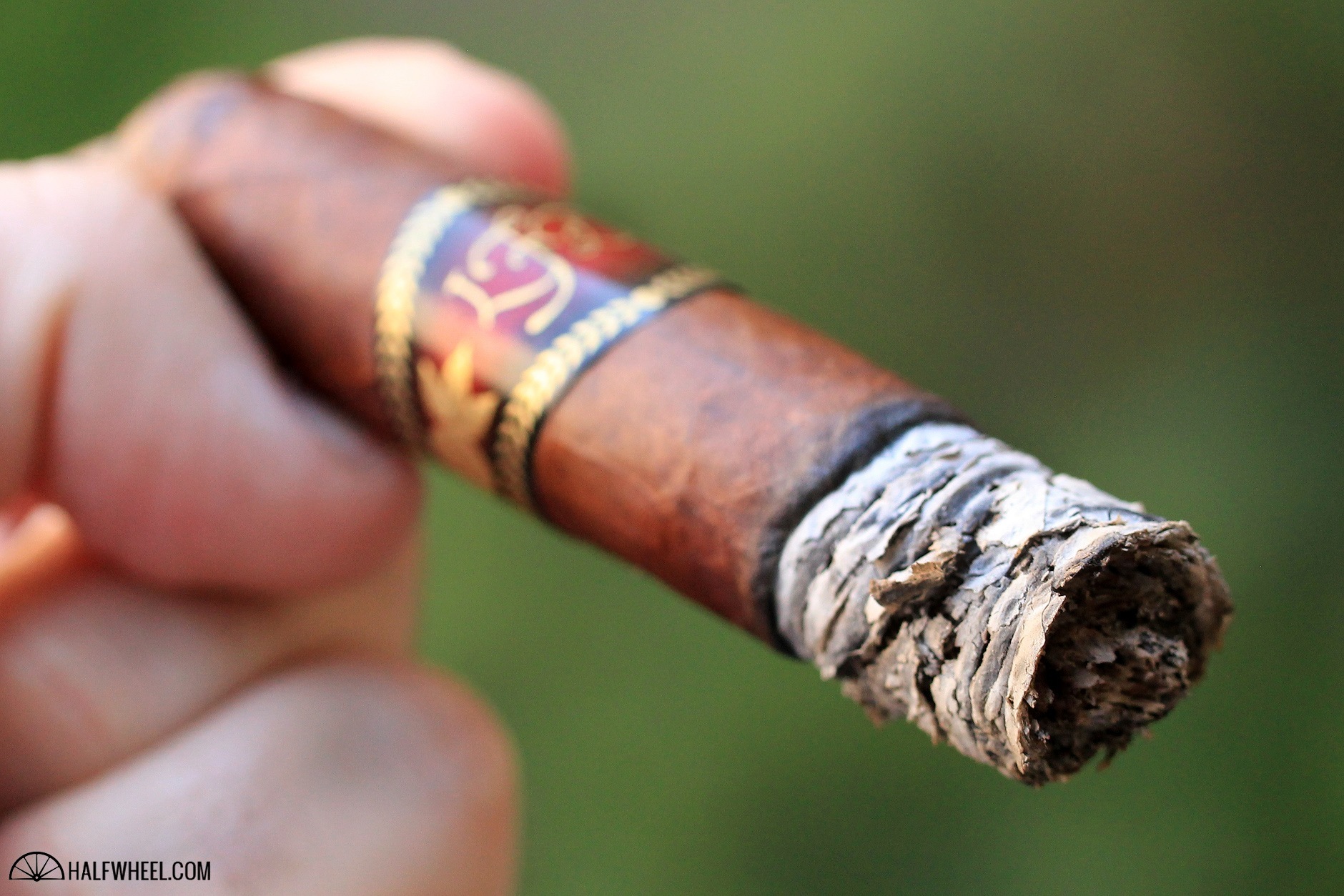 With the flavor holding steady for the start of the final third, my attention gets drawn to the smoke coming from the TAA 47, as it appears to have gotten thicker and heavier, and with no breeze around it simply hangs in the air around me, unwilling to drift away. Notes of pepper and earth become a bit more dominant and leave a lasting tingle on the tongue, while the cigar holds its balance nicely and never returns to that roar it showed out of the gate. In the final two inches I find an introduction of meaty sweetness to the aroma, the first sign of any sweetness to this point, and a pleasant addition that takes the cigar in a slightly new direction for its final puffs. Both samples get smoked down to tiny nubs without getting hot or bitter, a drawn out conclusion to a very enjoyable cigar. I was a bit concerned by what the La Flor Dominicana TAA 47 might have in store given the first quarter of an inch, but thankfully the cigar righted itself quickly and delivered a solid five inches of flavor that is right in the LFD wheelhouse. At times it was hard to pick out just what part of the blend was shining brightest, which for me is often a good thing since it felt like I was experiencing the sum of the parts more than the individual components. Another solid creation from La Flor Dominicana that should be right at home in many humidors.