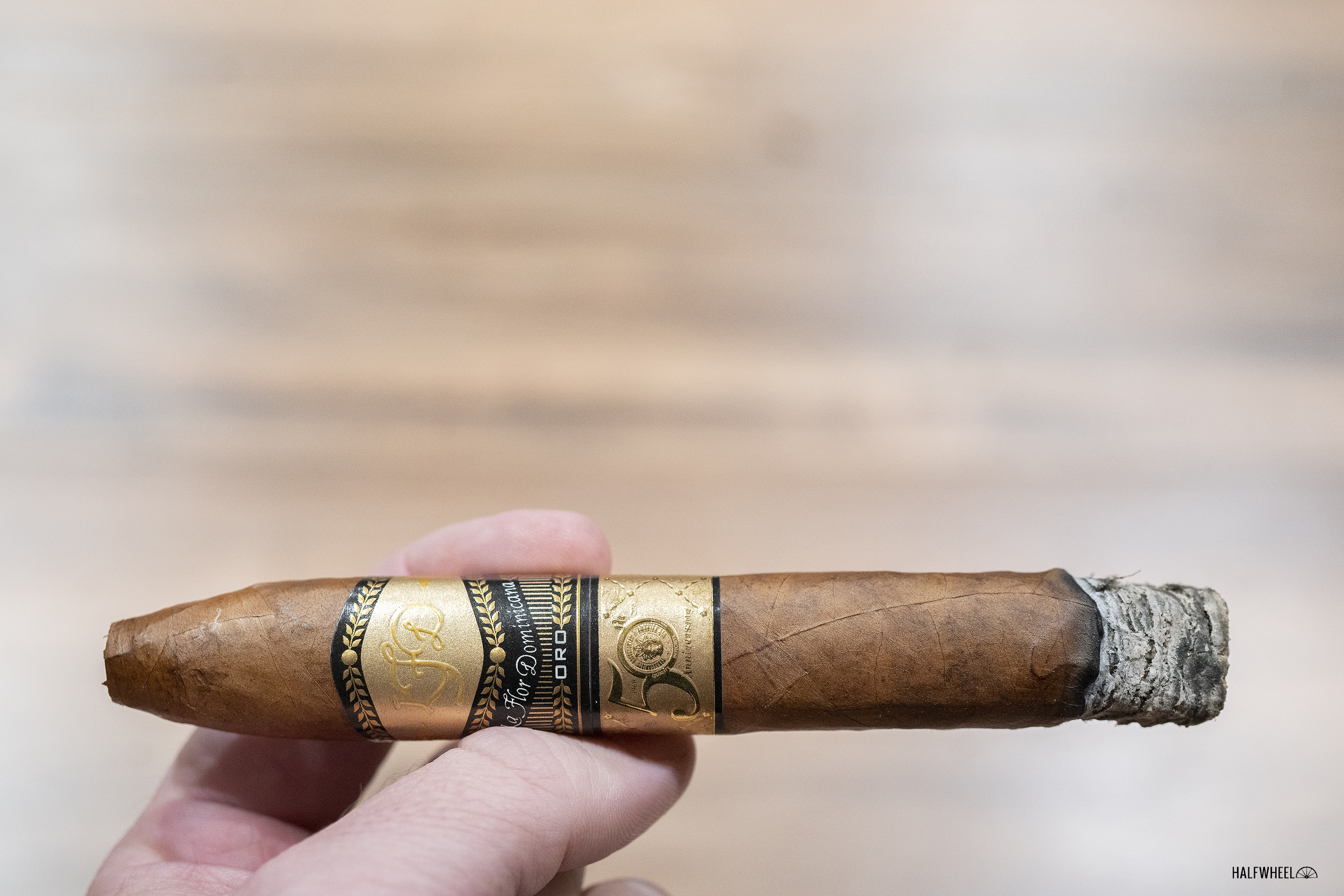 While nothing can make up for a cigar made with high quality, well cared for tobacco, a cigar with a bit of a backstory is always  welcomed.

In the case of this cigar, there are a couple of backstories, namely that it’s an exclusive release for the Tobacconists’ Association of America and released in celebration of the group’s 50th anniversary.

Then there’s the box.

As the story goes, La Flor Dominicana’s owner, Litto Gomez, asked his son, Tony, to design the box in which the cigars would be packaged. Tony did so, using the WhatsApp app on his phone, to quickly whip up a design that he sent to his father to show off to the TAA retailers. It was far from something produced with Photoshop and a proper stylus, but for something that was likely drawn with his finger, it seemed to do the trick.

In fact, it may have done the trick too well. The design found so much favor that it ended up being used on the finished product, albeit with the addition of a few elements, including a silhouette of Gomez smoking a cigar.

As for the cigar, while it wears the same band as La Flor Dominicana’s Oro line, it is not the same blend. This cigar uses a Nicaraguan sun grown wrapper over a Dominican binder and Dominican fillers, most notably a Dominican criollo 99 leaf that the company has been growing at its La Canela farm for a few years but had yet to use until this cigar. It was offered in a 6 1/2 x 54 box pressed torpedo vitola, and offered in 20-count boxes with single cigars priced at $24, before taxes.

Here’s what I said about the La Flor Dominicana TAA 2018 Golden “Oro” Anniversary when I reviewed it in December 2018:

Part of the reason we smoke three samples for our reviews is to give as well-rounded and comprehensive of a review as possible, ironing out the peaks and valleys that may come with individual cigars. Yet when it comes to the La Flor Dominicana TAA 2018 Golden “Oro” Anniversary, the three samples seemed to create more questions than answers. The first cigar was solid on all fronts, burning well while delivering balanced flavors that had me optimistic that the cigar would deliver on its price tag. The second cigar was the exact opposite due to serious problems with tar and related bitterness, while the third was on a better track than the first until slamming the brakes in the final third and refusing to burn. When it is at its best, this cigar is near sublime, yet the uncertainty I’m left with after smoking three of them leaves me hesitant to return to it or recommend it, though even despite the price, the high points of the cigar do make it tempting.

I don’t know if it’s the lighting of the room where I am smoking this cigar, but the La Flor Dominicana TAA 2018 Golden “Oro” Anniversary has a much more golden hue than I remembered it having, though I definitely recall how much gold the bands had in them. Either way, it is a very attractive cigar, with a well done box press and the tapered head giving it some distinct visual character. There is still a nice tanning of the wrapper leaf, which doesn’t have much of an oily sheen but still feels fairly smooth on the fingers. Veins are small and create a visible network, tooth is non-existent, and color is generally even with just the slightest bit of mottling revealing itself in certain light. It’s firmer than what I would consider average for box-pressed cigars, showing the slightest bit of give from front to back. Aroma off the foot consists of a rich, buttery leading scent that leads strong before fading away as a singular smell. Even with the belicoso head, air flow doesn’t feel impeded whatsoever, flowing smoothly throughout the cigar with a bit more of the buttery flavor that picks up a bit of baking spice and black pepper, with a faint cedar closing things out and leaving a tingle on the front of the tongue as well as the lips.

The first puffs of the La Flor Dominicana TAA 2018 Golden “Oro” Anniversary have a rich creaminess to them, coating the palate before black pepper comes along to tingle the taste buds. Retrohales offer the same experience, though the one-two combination happens a bit quicker, though the pepper isn’t nearly as potent. By the one-inch mark, there is bit of a campfire smell emerging in the aroma, while the palate gets more of a firewood flavor. The retrohale now lingers in the nose longer than it did earlier and more than the flavor lingers on the palate. From there, the flavor picks up a combination of rich earth and chocolate, and while it’s a fleeting combination, it is incredibly complex and enjoyable. It also sets the stage for a transition to a cooled off hot chocolate flavor that takes over for a few puffs. The flavor gets a bit robust as the burn line approaches the midway point, settling in at a slightly grating medium-full, while body is just behind that and strength feels medium-plus and building. Construction is very good, with a quick touch-up to even out the burn line, plenty of smoke production and no combustion issues.

A retrohale to start the second half shows that the cigar has picked up some more black pepper, as it’s a couple of ticks stronger than it had been in the first half. The flavor turns earthier and with that comes just a bit of chalkiness in the profile, most notable for its bite on the front of the tongue. From there, the flavor gets waxy and heat enters the equation for the first time. A bit more chalk isn’t far behind that and even though the cigar seems to be teetering a bit, it doesn’t quite go over the edge. The final inch picks up a small bit of peppermint before it becomes time to put the cigar don after three hours of smoking. Construction remains very good although smoke production slows down a tick. Flavor finishes near full, while body and strength are near medium-full.

The La Flor Dominicana TAA 2018 Golden "Oro” Anniversary has definitely improved with two years of rest, and feels like it just might be waking up and coming into its own. The steady progression of flavors through the first two thirds is nothing short of stellar, an impressive mix that moves with finesse and purpose. While the final third seems like it could use a bit more time to smooth itself out, this cigar shows it is very much headed in the right direction.