In 2015, La Flor Dominicana released the first version of what has become an annual tradition celebrating not only the Super Bowl but also the sport of football in general. Somewhat appropriately named the Special Football Edition, each cigar is rolled with an image of a football made by adding pieces of tobacco on top of an already rolled stick. In addition, the annual cigars are shipped exclusively to retailers in the state where the Super Bowl is held—and in some years, where the teams are from—which this year turned out to be Tampa, Fla. 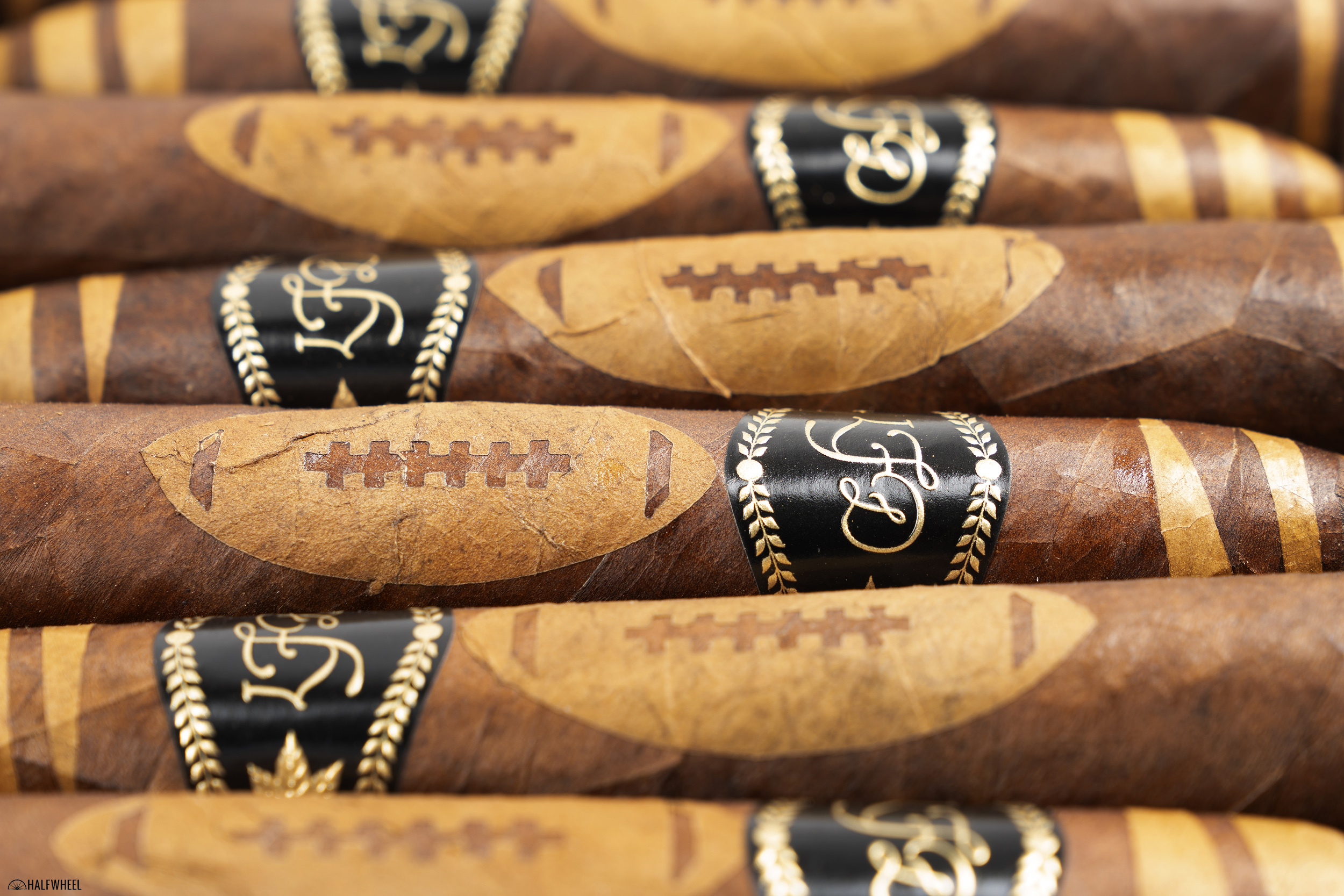 For the Special Football Edition 2021, La Flor Dominican chose a 5 1/2 x 63 figurado incorporating an Ecuadorian habano base wrapper, while Connecticut-grown tobacco was used to create the football art and accents that adorn the cigar. Internally, the blend also includes a binder and filler made up of Dominican-grown tobacco and each cigar is priced at $20, or $200 for each 10-count box.

There have been seven different releases in La Flor Dominicana’s Special Football Edition Series so far. As with the rest of the releases in the series, the Special Football Edition 2021 cigars were rolled at La Flor Dominicana’s Tabacalera La Flor S.A. and boxes started shipping to retailers on Jan. 18. 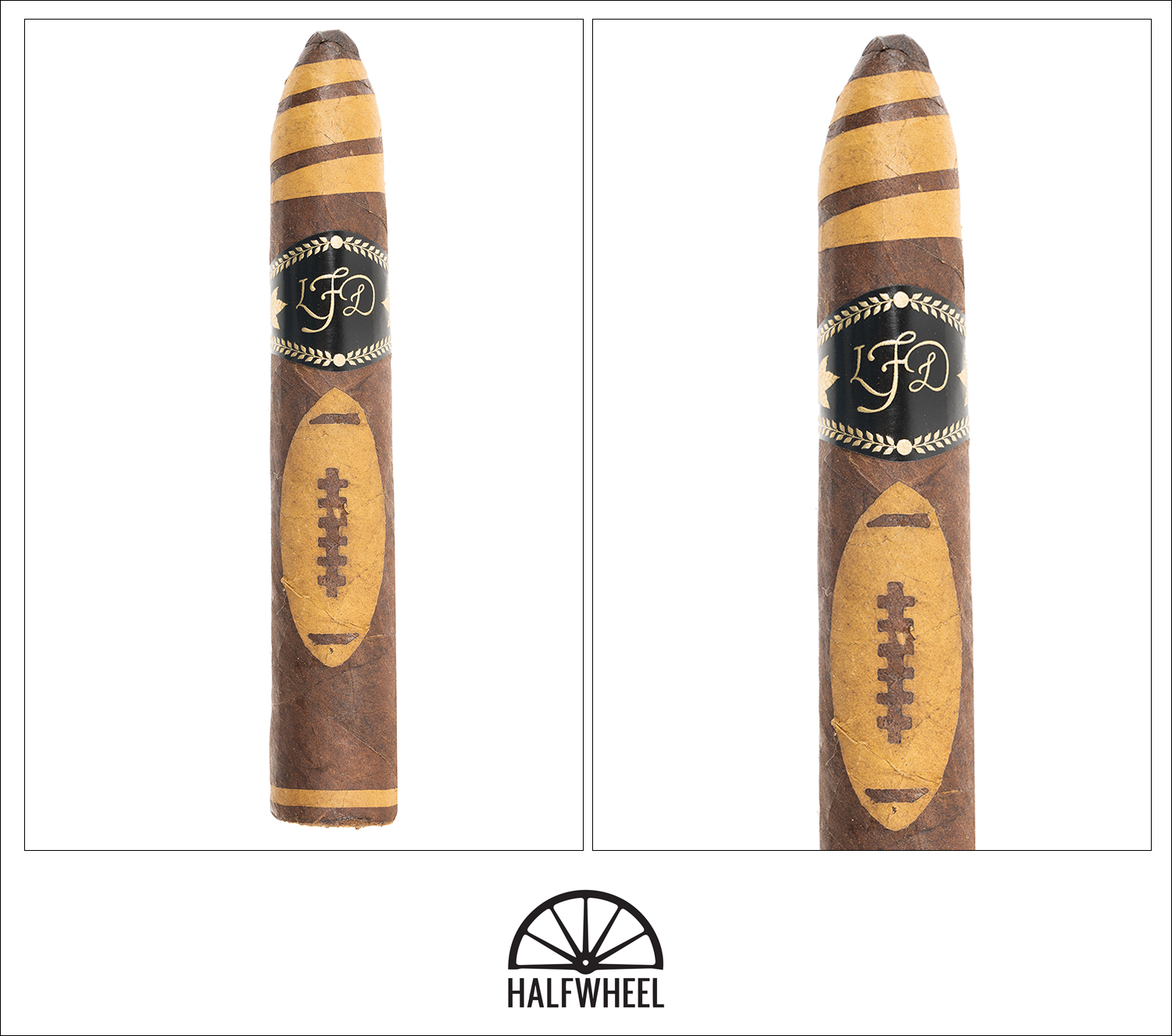 “Memorable” is a bit of an understatement when it comes to the La Flor Dominicana Special Football Edition 2021, an overall look that includes not only the most obvious feature—i.e. the depiction of a football in light-colored tobacco leaf on the front of the cigar—but also a very rustic reddish-brown wrapper. There is a bit of oil as well as numerous prominent veins running up and down its length and the cigar is nicely firm when squeezed. Aroma from the wrapper and foot includes notes of black tea leaves, sweet manure, earth, creamy leather, oak, espresso beans and slight citrus, while the cold draw brings flavors of sweet hay, creamy leather, oak, cinnamon, almonds and black pepper.

Starting out, the La Flor Dominicana features flavors of sweet hay and creamy almonds dominant, followed by lesser notes of earth, leather, espresso beans, cocoa nibs and oak. There is quite a bit of spice on my tongue—although it does begin to recede almost immediately—as well as some black pepper on the retrohale that combines nicely with some distinct maple sweetness that is also present. Construction-wise, the draw is excellent after a Dickman cut. While the burn is is not exactly razor sharp, it is not bad enough to need any attention with my lighter yet. The strength starts out surprisingly mild, and while it does ramp up a bit, it still only manages to hit a point closer to medium than mild by the end of the first third.

Although the combination of sweet hay and creamy almond continues to dominate the profile of the Special Football Edition 2021 in the second third, some new flavors of cinnamon and anise join the already existing background notes of earth, dark chocolate, creamy leather and freshly brewed espresso. As expected, there is less black pepper on the retrohale and spice on my tongue, but the maple sweetness has increased slightly as well. While the draw continues to do great, the burn becomes problematic enough to need a quick touchup right before the halfway point. The strength increases noticeably, but still ends up still a ways from the medium mark by the time the second third comes to an end. There are not many major changes in the profile of the La Flor Dominicana during the final third, which means the familiar sweet hay and creamy almond combination easily dominates the rest of the flavors with ease. Secondary notes of espresso beans, leather, earth, powdery cocoa nibs and just a touch of a new floral flavor flit in and out in various amounts, while the spice from the first two thirds had disappeared almost completely. In addition, the black pepper on the retrohale remains constant compared to the second third, while the maple sweetness decreases slightly. In terms of construction, the draw continues to impress while the burn has evened up nicely. The overall strength closes at a point just below the medium mark by the time I put the nub down with a bit more than an inch remaining. Considering La Flor Dominicana's reputation for stronger blends, you might be forgiven for assuming that the newest Special Football Edition 2021 release is a powerhouse of a smoke built to knock you off your feet after an entire day spent gorging yourself on snacks and beer. However, when it comes to the newest incarnation of the series, nothing could be further from the truth: instead of power, the cigar is full of subtlety; instead of strength, there is plenty of nuance. Having said that, the main flavors in the profile are bit linear, and while the construction was decent overall, each of the cigars I smoked did have to be touched up at least once. In the end, the Special Football Edition 2021 release wins points for its balance and approachability, but its sub-medium strength may disappoint those expecting a stronger blend.