For much of the latter half of 2015, La Flor Dominicana has been on a tear of new product shipments. It’s come in the form of just about everything: some entirely new products, others continuations of series, the normal mix of small runs for single stores and even a few lines that are being brought back in 2015. The Salomón Especial is not just another typical-looking cigar. While it retains the 7 x 64 dimensions, it borrows some of the TCFKA M artistry including striped accent leaves on both the cap and foot. This year’s version using Nicaraguan sun grown habano wrapper for the primary cover leaf with Ecuadorian Connecticut accents and Dominican fillers. My samples have been in a few different humidors and by the time I manage to smell them, whatever aroma the wrapper had has faded into the air. The foot has a bit of floral flavors, not really what I would expect given the dominance of the Ecuadorian Connecticut accents around that part of the cigar, but it’s enjoyable. I cut the cigar right above the two tobacco accents leaving just enough room to try to hopefully avoid them from unraveling during smoking. There’s a great combination of floral flavors and nuttiness on the cold draw alongside some twang, lots of meatiness and vegetable oil.

In many ways, it’s frustrating to see the beauty of the La Flor Dominicana Salomón Especial 2015 begin to burn, but cigars are made to be smoked, not stared at. As for the first puff, there’s not much at all. The draw is tight and the smoke production is low, but after a few puffs I get a bit more smoke and there’s a combination of nuttiness, leather and sweet earth that reminds me of early Oliva Serie Vs. Once the nipple is most burned through the flavor comes alive, now a crisp medium-full profile with a deep almond core and some peanuts behind it. The La Flor is relatively sweet, but there’s some saltiness. Retrohales, which are punishing at the beginning, become easier display lots of lemon, some hay and fresh cut grass. There’s some generic pepper on the finish as well as some peanut butter, which is an odd mixture. A mild grapefruit sweetness adds itself around the one hour and 15 minute mark. It along, with a sweet creaminess, push the La Flor even sweeter, although it’s hardly overwhelming. The nuttiness is still there now joined by earth, leather and some mineralogy right before the finish. Retrohales show the grapefruit a lot more alongside some sweet tomato and chalkiness. The finish of the Salomón Especial is more spices rather than pepper, but it remains quite similar in terms of how it affects the overall profile. I’d still peg the cigar as medium-full, although all the flavors are quite developed. Strength is only around a medium, which is quite odd for an LFD. 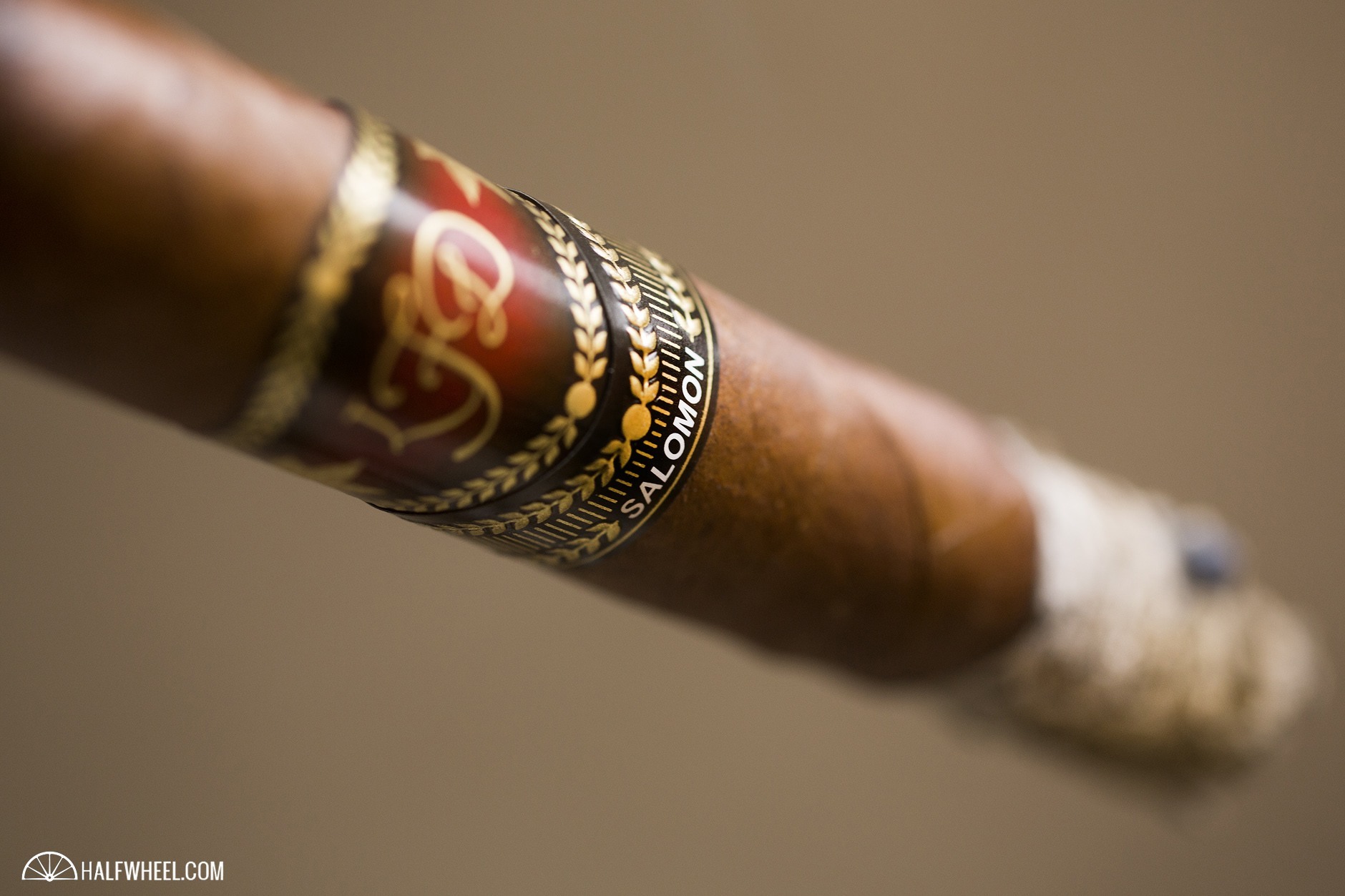 Construction remains awesome into the final third and the flavor is relatively similar. The nuttiness loses some of its roasted characteristics and the grapefruit is still there. Gone is the creaminess and there’s now an added meatiness, but the rest is familiar. I am able to identify the spices on the back end as cinnamon and nutmeg, which are now joined on the finish with the tomato and some of the newfound meatiness. With well over an inch left, I begin to notice the Salomón Especial losing some of its richness and decide that three hours is enough for me. You must be in the mood for the La Flor Dominicana Salomon Especial. Anytime you are going to commit to smoking a cigar of this size, there are consequences. First and foremost is the time, which for me was over three hours, but there’s also the complexities of consuming this much tobacco in a single sitting and oddly, it’s not the strength. La Flor Dominicana is known for making some of the strongest cigars and fortunately, the Salomon Especial is relatively tame as far its punch, but the overall thump adds up. As for the flavor, it’s very good: balanced, detailed and yet, there’s still some muted flavors that should open up as time goes on. It’s a beautiful cigar to look at, a beautiful cigar to smoke, but a major commitment in both price and time.