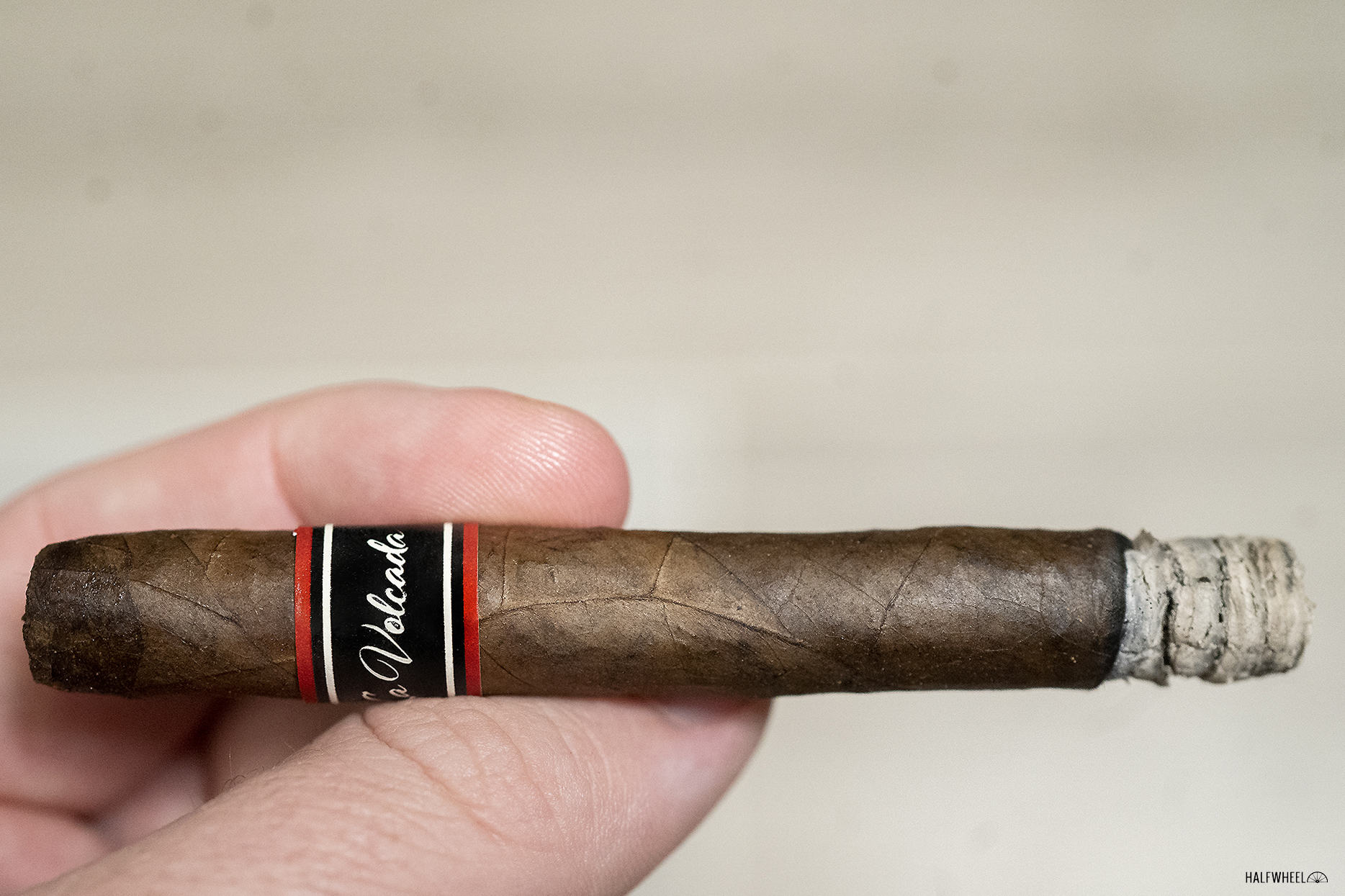 One of the things I am fascinated by is how people respond to certain cigar vitolas. I understand that there can be such a thing as too much cigar for some folks, either in terms of time or the perceived amount of strength it will deliver. But I have had enough instances where I’ve had someone flat out say that they don’t smoke lanceros, gordos, belicosos, or some other size.

I bring that up because I try and use those experiences as a mirror to my own potential biases. When it comes to the cigars I review, I don’t get to pick the vitolas, which might not be how I would have designed it, but I definitely enjoy and benefit from it because it keeps me from falling into a comfort zone of coronas. I also bring it up because had I not been assigned to review the La Flor Dominicana Petite La Volcada, I might have missed out on one of the best cigars to come out in 2020, as most of my previous experiences with the size have not been ideal.

After releasing the original La Volcada in a 7 x 48 Churchill vitola in December 2017, La Flor Dominicana went to the other end of the size spectrum for the next size. The Petite La Volcada measures just 4 1/4 x 32, a small panetela that comes in six-count metal tins as opposed to wooden boxes. Both cigars use a Mexican San Andrés wrapper, an Ecuadorian corojo binder and fillers from the Dominican Republic. 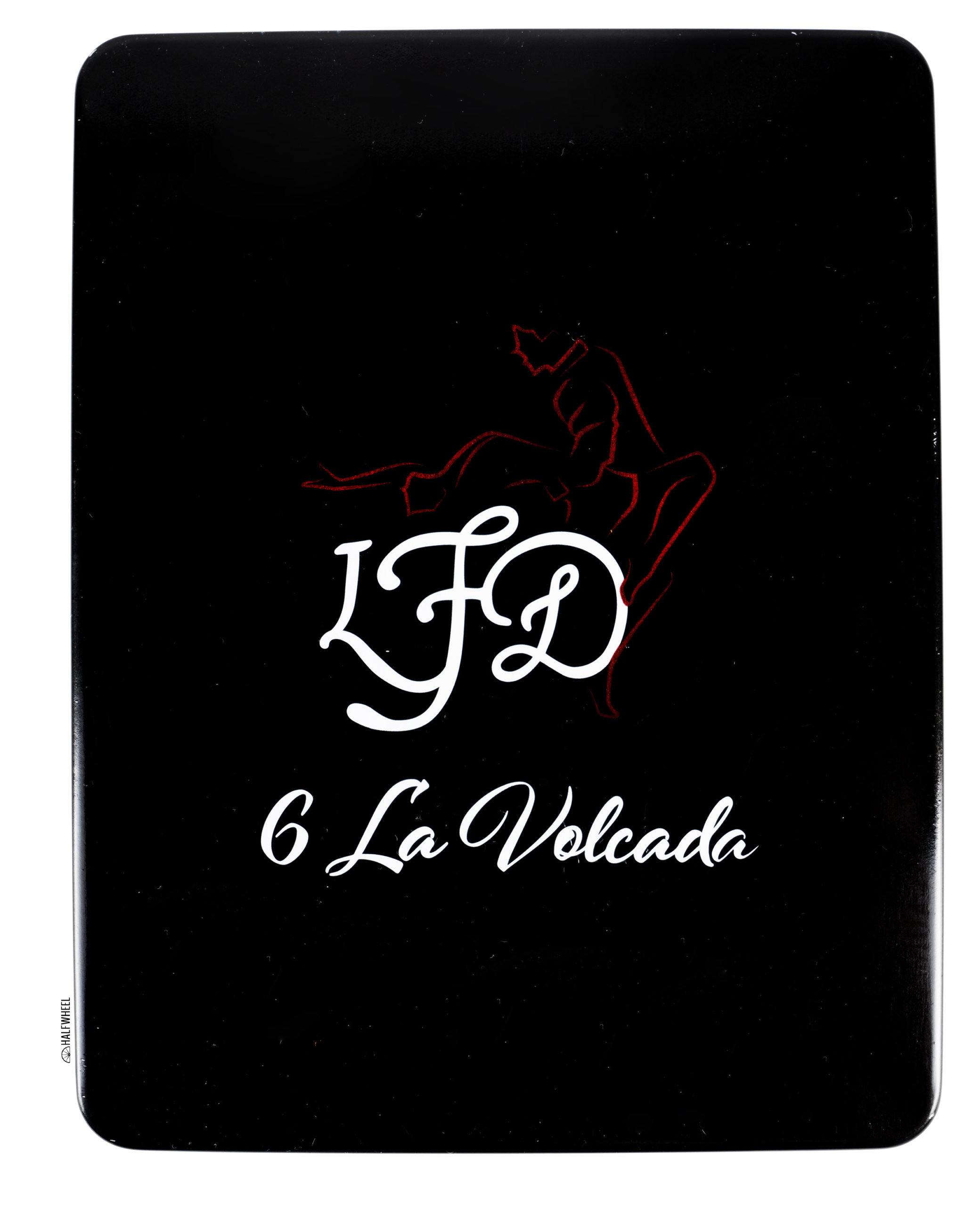 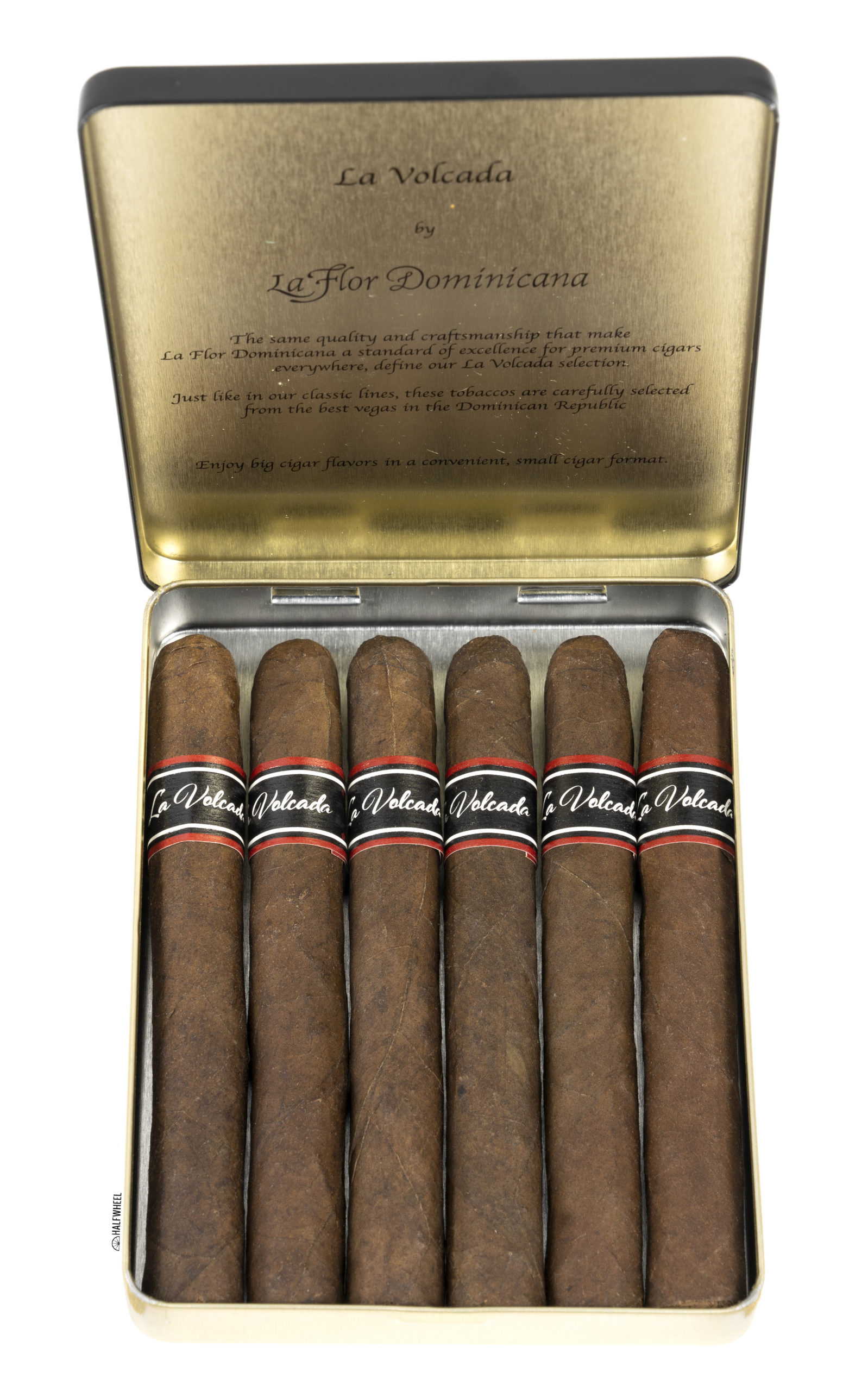 While I enjoyed the original La Volcada, the smaller size seemed to not only outperform its bigger sibling but restored my faith in the small panetela vitola to be able to deliver impressive flavor. Beyond earning a 93 point score in its original review, it would to to place #14 on halfwheel’s Top 25 Cigars of 2020 list.

Here’s what I said about the La Flor Dominicana Petite La Volcada when I reviewed it in April 2020:

I have generally stayed away from vitolas such as these for a number of reasons, from flavor to technical performance to just general preference. But after smoking three of the La Flor Dominicana Petite La Volcada, my hope has been restored in the size. Almost as if it knows time is limited, the blend wastes no time delivering what it has to offer: a very enjoyable and distinctive mix of earth and pepper that gets highlighted by touches of sweetness and a gradual evolution from the San Andrés-led first puffs to the Dominican-led final puffs. Equally as impressive, maybe even more so, was the technical performance, with this small cigar performing just as flawlessly as many of its bigger siblings. While the size might have limited all that this blend could do, it well outperforms its size—and its price. 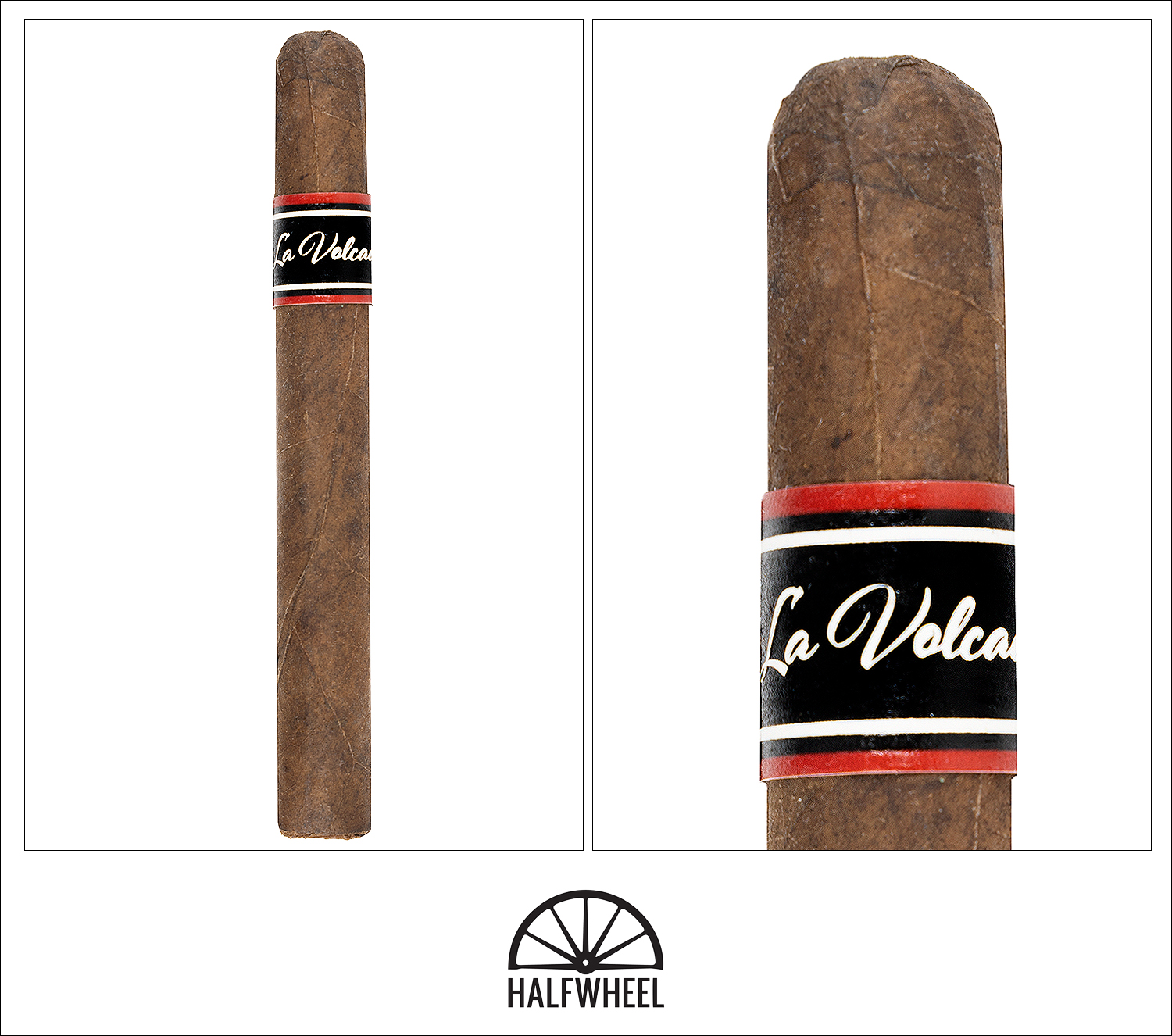 While most cigars offer a lot to take in, the La Flor Dominicana Petite La Volcada offers quite a bit less. The wrapper leaf looks good; a rich, dark brown with a bit of mottling, a good network of veins and not a lot of oiliness. That mottling and a slight bit of color variation is most visible along the seam lines, and while it’s noticeable, it is not distracting. In that vein, the visible seam lines reveal the exact cut lines of the wrapper, head and cap, which isn’t a bad look but do add another layer of visual texture. It’s a fairly firm cigar, and from a visual perspective there is just enough that gives the cigar a bit more of a rustic, freehand feel. The aroma from the foot is mild and almost spot on in terms of a generic, dried tobacco smell. There’s not a lot of pepper or other aromas, though for some reason it does induce a couple of sneezes. Air moves without issue on the cold draw and the flavor is more developed than the aroma, slightly oily with undertones of lumber and white bread toast before a slightly sweet finish glances over the taste buds.

The La Flor Dominicana Petite La Volcada starts out on a dry note with a profile that wastes no time getting to business, hitting the palate with a crisp black pepper, dry wood and a rich yet dry earth, and then finishing with a lasting tingle from the combination that hits the whole tongue but focuses towards the tip. The cigar does an impressive job of avoiding being too aggressive out of the gate, which is something I’ve found on these small, thin vitolas. Retrohales are equally as vibrant though don’t show as much of the earth, which seems to allow the pepper to be a bit brighter and punchier, with the finish not quite as lingering. Even after two years of rest, it’s still an impressively vibrant profile, and while it doesn’t change drastically in the first half, the amount of sensory engagement it offers easily makes up for that. It’s medium-full in flavor, medium-plus in body, and right around medium in strength, though I’m not feeling any effects from the cigar thus far. It burns quite well, with the only issue being me needing to find a balance in puffing rate that keeps the cigar burning without turning the profile hot and sharp by over-puffing.

There’s a slight change in the profile as the burn line crosses into the second half, with the profile taking on just a bit of charred earth and wood, enough to be noticeable but not enough to be off-putting. The finish continues linger on the tip of my tongue and it’s noticeable enough that I wonder if it’s slowing down my puffing rate a bit since I still have remnants tingling my taste buds. Retrohales still have the same effect as they did in the first half, hitting the nostrils with a fairly peppery first sensation before fading away more quickly. As the burn line hits what would be the start of the final third, I pick up a very subtle creaminess coming into the profile, though it’s not enough to counteract a growing scorched earth flavor on the finish. There’s a bit more oiliness to the profile now, making for an interesting progression of the puffs hitting my palate, as it now has more distinct flavor and textural tracks, whereas they had been previously been more aligned. The cigar holds onto its balance all the way down to the very end, with flavor medium-plus, body closer to medium, and strength right around medium. Construction is still fantastic, though I still find myself adjusting my puffing rate to try and find that perfect rate, which is about the only thing I have to complain about when it comes to the 45 minutes I spent smoking the La Flor Dominicana Petite La Volcada.

Because of its thin vitola and small size, the La Flor Dominicana Petite La Volcada has a narrow tightrope to walk to stay balanced and enjoyable without becoming sharp or harsh, and it does so masterfully. Just like it did a little over two years ago, the flavor shows depth, balance and complexity, overdelivering on any expectations for a cigar of this size. I really can't say enough about how good the La Flor Dominicana Petite La Volcada is, only that it shouldn't be overlooked in the humidor.