On Sunday, there is a football game. For Europe—and most of the rest of the world—there’s lots of football games on Saturday, but I digress.

Super Bowl 50, America’s most popular sporting and television event, kicks off on Sunday. While there are no official Super Bowl cigars–because the licensing fees would be a bit astronomical–there are at least two cigars being made for the Super Bowl as unofficial products.

One is the Ditka Special GameDay Edition, made through Davidoff of Geneva USA’s partnership with the football legend Mike Ditka. The other is the La Flor Dominicana Special Football Edition 2016. There’s no celebrity football endorsements behind La Flor’s entry, instead there’s a football, literally, on the cigar.

For the second year in a row, La Flor Dominicana has created a cigar that has a football, made using pieces of tobacco, on the cigar itself and sold it to retailers in the area where the Super Bowl is being held. This year’s version is a 5 5/8 x 54 perfecto with an Ecuadorian habano wrapper and Connecticut-seed accents. Underneath is a Nicaraguan binder and Dominican fillers. 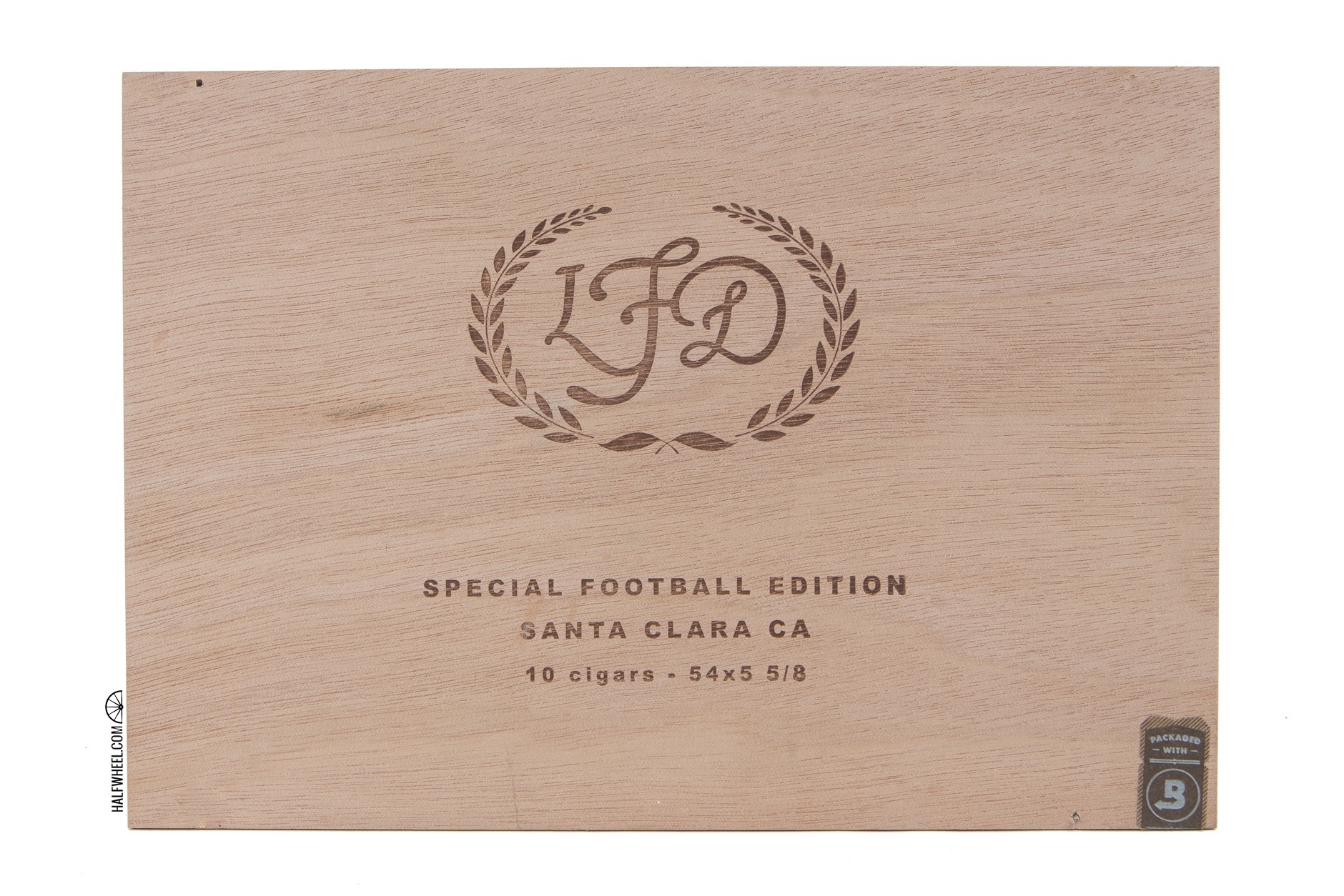 The cigar is priced at $12 and comes in boxes of 10 that don’t really hide much about why the cigar is being made. While the game is being held in Santa Clara, the cigar has been offered to all La Flor Dominicana retailers in California. The shape reminds me quite a bit of the company’s TCFKA “M” vitola, although it’s both shorter and thinner than The Cigar Formerly Known as Mysterioso. That being said, the rounded edges and the curvature of the perfecto are similar. There’s Ecuadorian Connecticut accents on both the top and bottom of the cigar as well as the football in the center. From what I can tell it looks like the accents have been applied over the habano wrapper with the lacing being applied over the Connecticut tobacco, meaning in some places there’s as much as four pieces of tobacco. Aroma off the wrapper is somewhat acidic with leather and earth being the dominant flavors. I get a sweet mixture of hickory and other woods from the foot along with some mild milk chocolate and a bit of paprika. The cold draw tastes like the bottom of a pot of coffee with some really bold coffee flavors along with some dark chocolate and a bit of a port characteristic to it.

That barrage of coffee finds its way into the beginning of the La Flor Dominicana Special Football Edition 2016 as the first puff is dominated by some roasted coffee flavors followed by generic cedar, some butterscotch and a slight amount of pepper on the finish. Eventually, the flavor is overtaken by a bourbon-soaked oak flavor along with some red pepper on the tongue, cinnamon, the familiar butterscotch and some hay. While the flavors are consistent throughout the three cigars I smoked for the review, the intensity levels are not. On one sample it’s medium plus to medium-full while the other two samples are most certainly full and the back of my throat has been pummeled by the intensity of the entiriety of the flavors, not just the pepper. The oak-centric bourbon flavor remains at the core of the La Flor Dominicana joined alongside some orange peel, lemon tea and a mixture of red and black pepper on the back of the throat. There’s a ramen noodle-like finish which adds to the salty, sweet, sour and spicy contrasts that are going on. While there was some hints of a chalkiness in the earlier third, things really pick up on that front in the second third. The Special Football Edition is hitting all parts of my tongue, but it’s a bit overwhelming in two of the samples, distracting from the notably complex flavor profile. A creaminess adds itself into the mixture in the final third. There’s some dry fruit to join the ramen and chalky flavors that make it over from earlier in the cigar. The finish is herbal, but unlike most cigars, it’s incredibly restrained and actually enjoyable, which is not how I would describe most herbal flavors. With under two inches left, hay becomes a big part of the Special Football Edition. Smoke production slows down a bit in the final third, but otherwise construction remains fine. While I wouldn’t classify this as a gimmick, it most certainly is an instance in which you are paying a lot for the decoration on the cigar. This year’s La Flor Dominicana Special Football Edition isn’t a bad cigar, but it’s not what I will be reaching for on Sunday. In its best form this is a decent cigar, but there are certainly dozens of better LFDs I’ve smoked, if not a dozen better LFDs I’ve smoked in the last year.