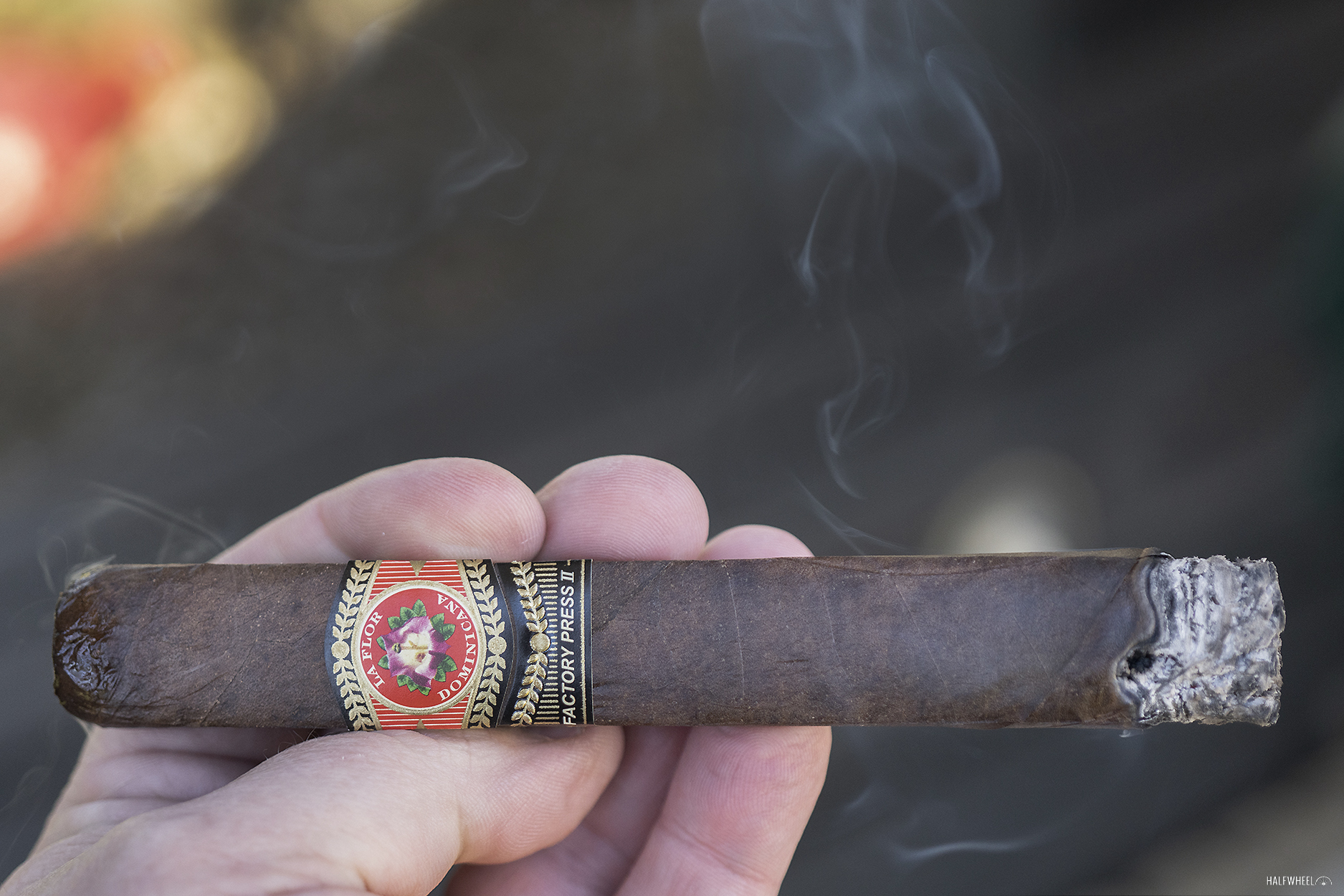 In 2005, La Flor Dominicana released the first of what would become one of the company’s longest-running series during the 2005 Retail Tobacco Dealer’s Association (RTDA) Convention and Trade Show, a precursor to the PCA Convention & Trade Show.

Named Factory Press, the cigars in the series take their monikers from the distinctive shape that is characterized by an extreme box-press on the top of the cigar that is a result of the way they are left packaged in trays until a customer purchases one.

La Flor Dominicana owner Litto Gomez had this to say about the original idea behind the Factory Press Series: 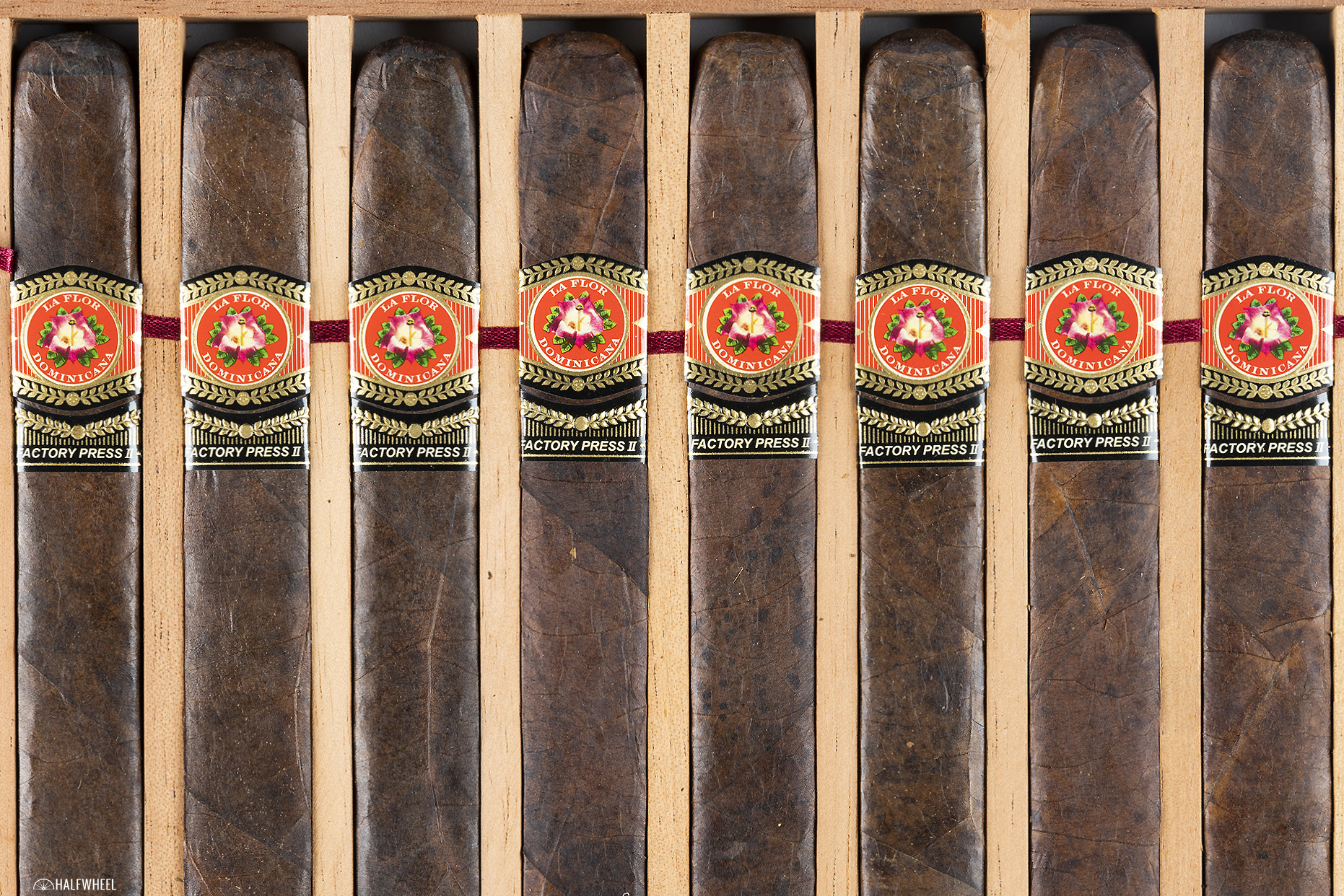 While the first release was made up of a Connecticut broadleaf wrapper, Sumatran binder and Dominican fillers, the second addition to the series was a different blend. Factory Press II incorporated a Nicaraguan oscuro wrapper, a Sumatran binder and filler tobaccos from the Dominican Republic. As with every incarnation of the Factory Press Series so far, the Factory Press II was sold in the actual trays they were originally packaged in, with 12 cigars in each tray and 10 trays in a master case, meaning a total of 120 cigars for each box.

There have been seven different releases in the Factory Press Series so far: 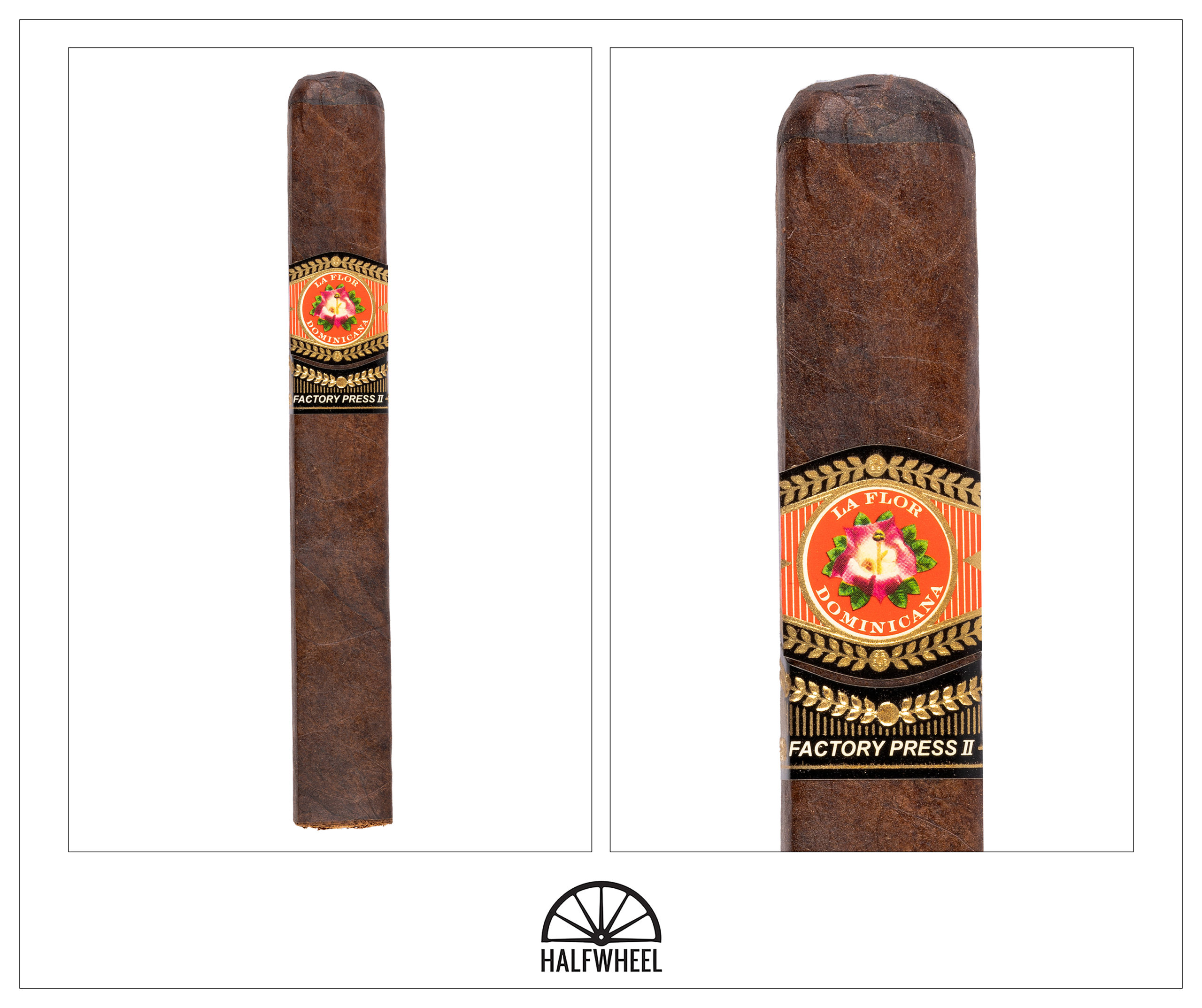 Dark and imposing, the La Flor Dominicana Factory Press II is a sight to behold, especially when you pull it from its spot in the tray. Even after all of this time, the wrapper is a gorgeous espresso brown color that is smooth to the touch and features a touch of oil. In addition, the press lines are sharp and the cigar is just short of rock hard when squeezed. The aroma from the wrapper is a combination of earth, manure, hay and generic nuts, while the foot includes notes of cinnamon, apple peel, leather, cedar and cocoa nibs. Finally, after a v-cut the cold draw brings flavors of cinnamon, apple peel, leather, cedar, dark chocolate and a bit of vanilla bean sweetness.

The first few puffs of the La Flor Dominicana Factory Press II are full of both earth and caramel sweetness, both of which are quickly replaced as top flavors by anise and leather tack. Additional notes of powdery cocoa nibs, aged cedar, hay, sourdough bread and a touch of citrus flit in and out, while there is a nice amount of spice on my tongue. The retrohale is full of vanilla bean sweetness, seemingly pulled over from the cold draw, along with a small amount of black pepper that is increasing as the first third burns down. Construction-wise, the draw is excellent after a v-cut and there is plenty of thick, white smoke, and while the burn is far from razor-sharp, it is also doesn’t need to be touched up. Flavor and body are both medium but rising while the strength ends the first third just under medium.

A distinct floral note, a flavor I have not picked up before now, becomes the leading flavor during the second third of the Factory Press II. Secondary flavors of creamy cedar, gritty earth, hay, dark chocolate, anise and brewed coffee flit in and out, and while there is still a touch of spice present on my tongue, it is nowhere near as strong as it was in the first third. The retrohale still features a nice vanilla bean sweetness—albeit less than before—as well as a small amount of black pepper. In terms of construction, both the draw and smoke production continue to impress, while the burn evens up nicely. Intensity-wise, flavor and body are hand-in-hand just above the medium mark, while the strength easily hits a solid medium by the time the second third comes to an end. The profile shifts in the final third and a salted popcorn note takes the top spot, followed by flavors of leather, earth, cedar, citrus peel, cocoa nibs, hay and a touch of a floral note. There is less vanilla bean sweetness on the retrohale—it almost disappears totally by the time the cigar comes to an end—but the amount of black pepper remains about the same. There continues to be no issues with either the draw or the smoke production, and while the burn has some minor problems with cracking—see below for details—it is not bad enough to need any attention from my lighter until the very end. Flavor and body both end the cigar at medium-full, while the strength takes a pretty large step up in the final puffs to hit medium-full as well, which did end up affecting the overall balance at the last part of the final third. While a number of La Flor Dominicana’s blends have knocked me on my butt when fresh—the Double Ligero and Ligero Cabinet Oscuro lines instantly come to mind—I have always felt that in general, the company’s cigars have a good chance of dropping some of that overt strength and picking up some nuance and complexity with age. The Factory Press II is a great example: it was quite strong when it was first released—I remember regretting smoking one during the first few years that I started enjoying cigars—with a smooth but fairly linear dark chocolate profile. While some strength is definitely still present at this point in its life, any major issues with it affecting the balance are relegated to the last part of the final third. In its place is a wonderful profile that features major changes between thirds, including a floral note that came out of nowhere to dominate the second third and stuck around for quite a while. In the end, the Factory Press II is a testament to La Flor Dominicana’s tobacco and blending, and one that I would say it still has quite a bit of gas left in its tank.