For one of his new lines released at the IPCPR Convention & Trade Show, Litto Gomez turned to a trip to southern Spain that that ended up netting him a antique cigar mold. While the mold was clearly well-worn, it was able to be duplicated, with the new copies used to produce the Andalusian Bull.

Named for southern Spain’s rich heritage of bullfighting and the running of the bulls, it builds on that by using a green and gold band that get its colors from the region’s flag, while also bearing a silhouetted image of a torero, or what you might know as a matador.

For the blend, Gomez and his team picked a dark Ecuadorian corojo wrapper, with it being the first time this specific—albeit undisclosed—priming has been used. Both the binder and filler come from Estancia La Flor de Palma, the farm shared by La Flor Dominicana and Tabacalera Palma. 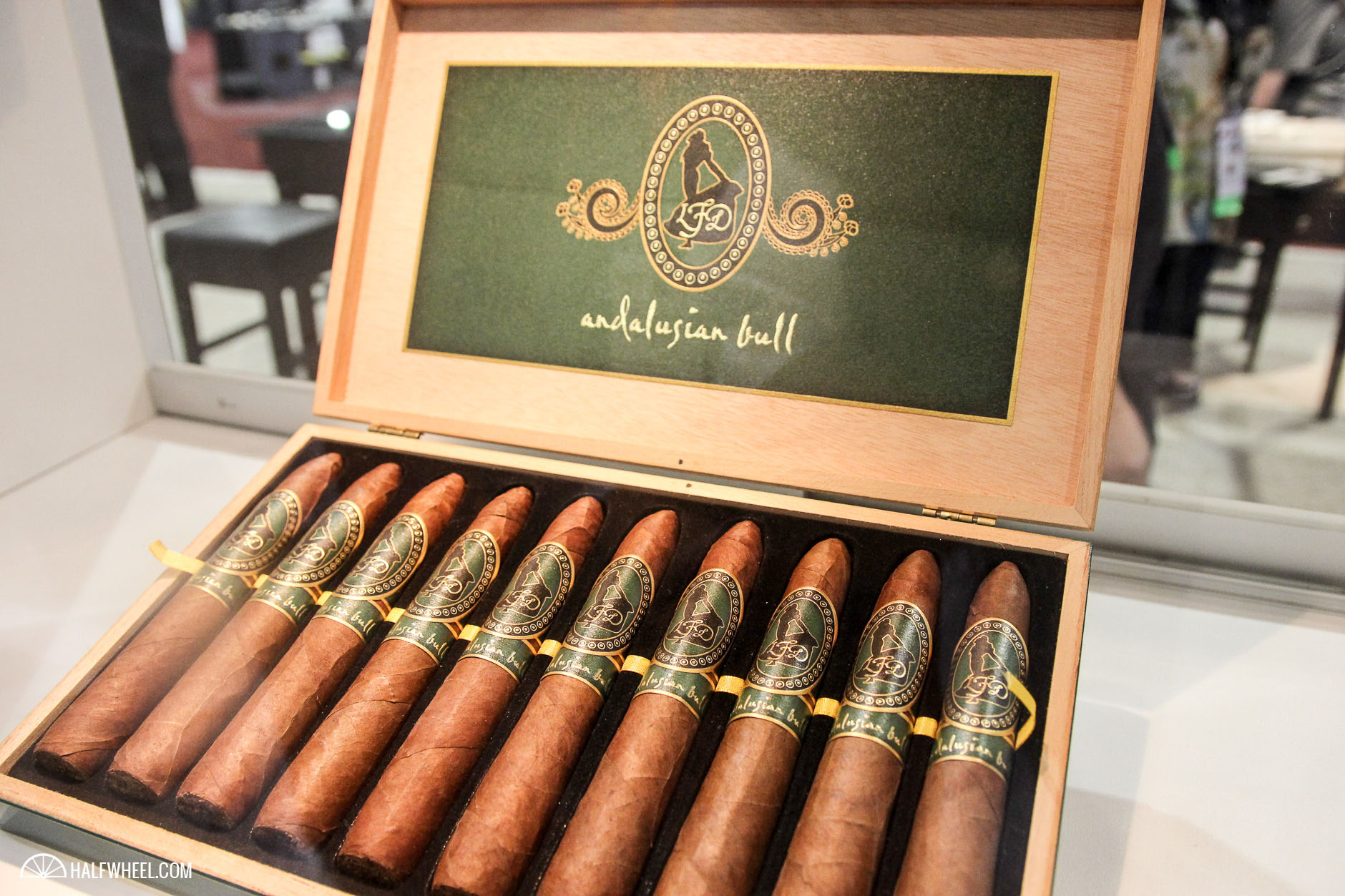 The Andalusian Bull will be a limited but ongoing production cigar, not made in the same quantities as the company’s core lines but also without any fixed number being produced. 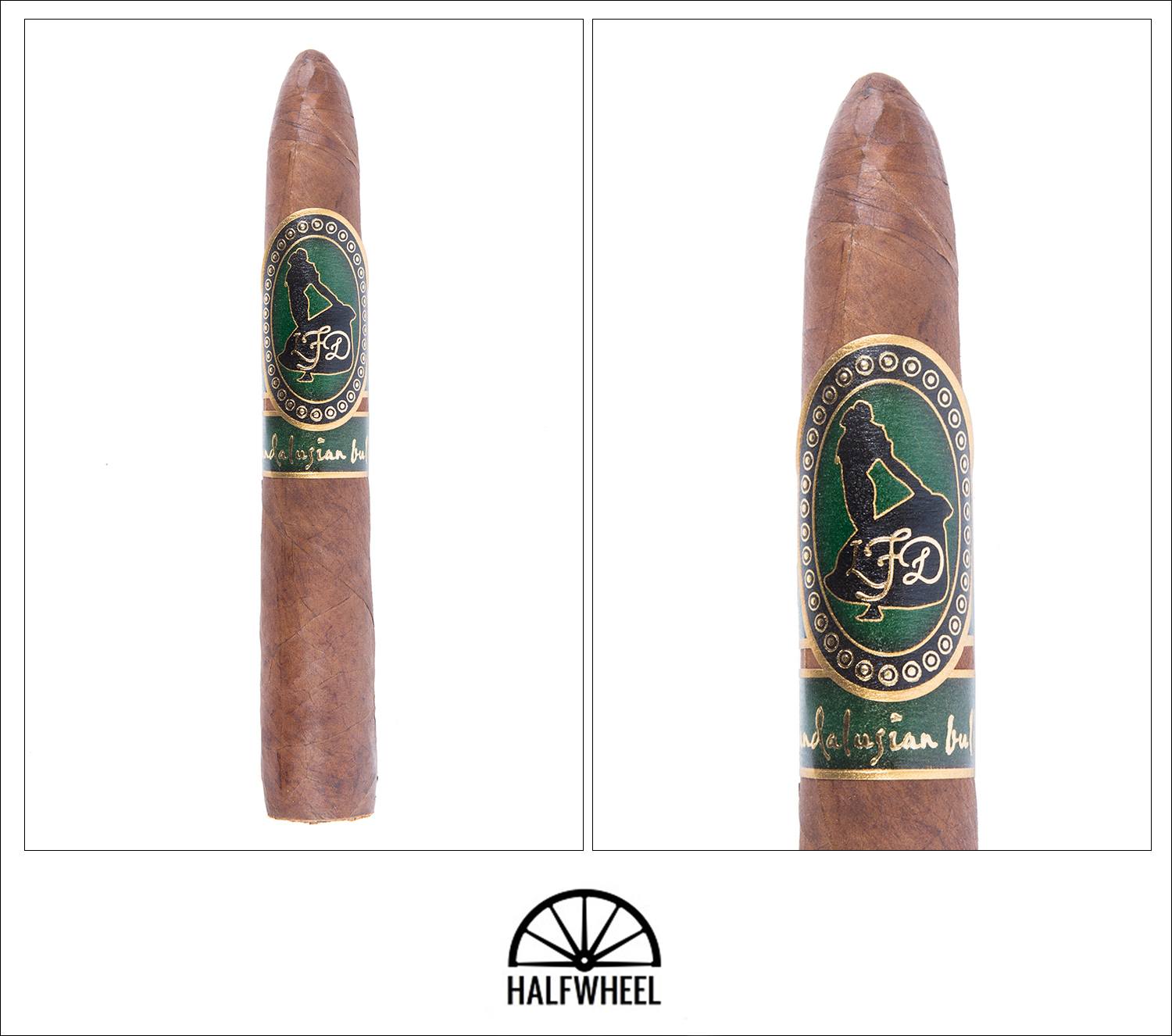 It’s hard not to find the Andalusian Bull striking, an imposing and exaggerated figurado with a 64 ring gauge foot and that comes bearing a dark green and gold band featuring a matador in grand pose. The cigar is firm and well rolled—though one of the three samples feels a bit too firm—and the wrapper has an oily sheen on it that glistens when it catches the right light and feels smooth to the fingers. The foot offers a cool grain note as the lead, with the thickness of the aroma varying the most from sample to sample as it can range from just kneaded dough to a bowl of Cheerios. Just a sprinkling of common pepper stands behind that to offer a gentle tingle to the nostrils. The cold draw is generally on the firm side though one cigar is near perfect, and delivers varying amounts of pretzel dough, cedar and hints of butter, with only a faint amount of pepper making it to the lips seemingly by way of physical contact with the tobacco.

Copious amounts of smoke are produced from the foot of the Andalusian Bull as soon as some air gets moving through the cigar, as the large foot offers plenty of combustible material. While the smoke can be creamy in its best form, chocolate is the first note I can pick up, manifested with the duality of a warm chocolate chip brownie and both quite subtle on the palate, something that might be a slight shock given LFD’s reputation for producing significantly strong cigars. At its best, the smoke is full, round and soft on the palate but by no means lacking. As that flavor works the palate, pepper begins to come along and add some weight and spark to the profile. The first clump of ash reaches about an inch in length before crashing into my metal ashtray with an audible thud. The profile remains fairly pepper-driven, and retrohales confirm that assessment, but the overall body has stepped back just a bit as the chocolate has departed and smoke production has been cut almost in half. Touches of mint ice cream start laying the bridge to the cigar’s second third as the burn has been quite good if a bit slow. 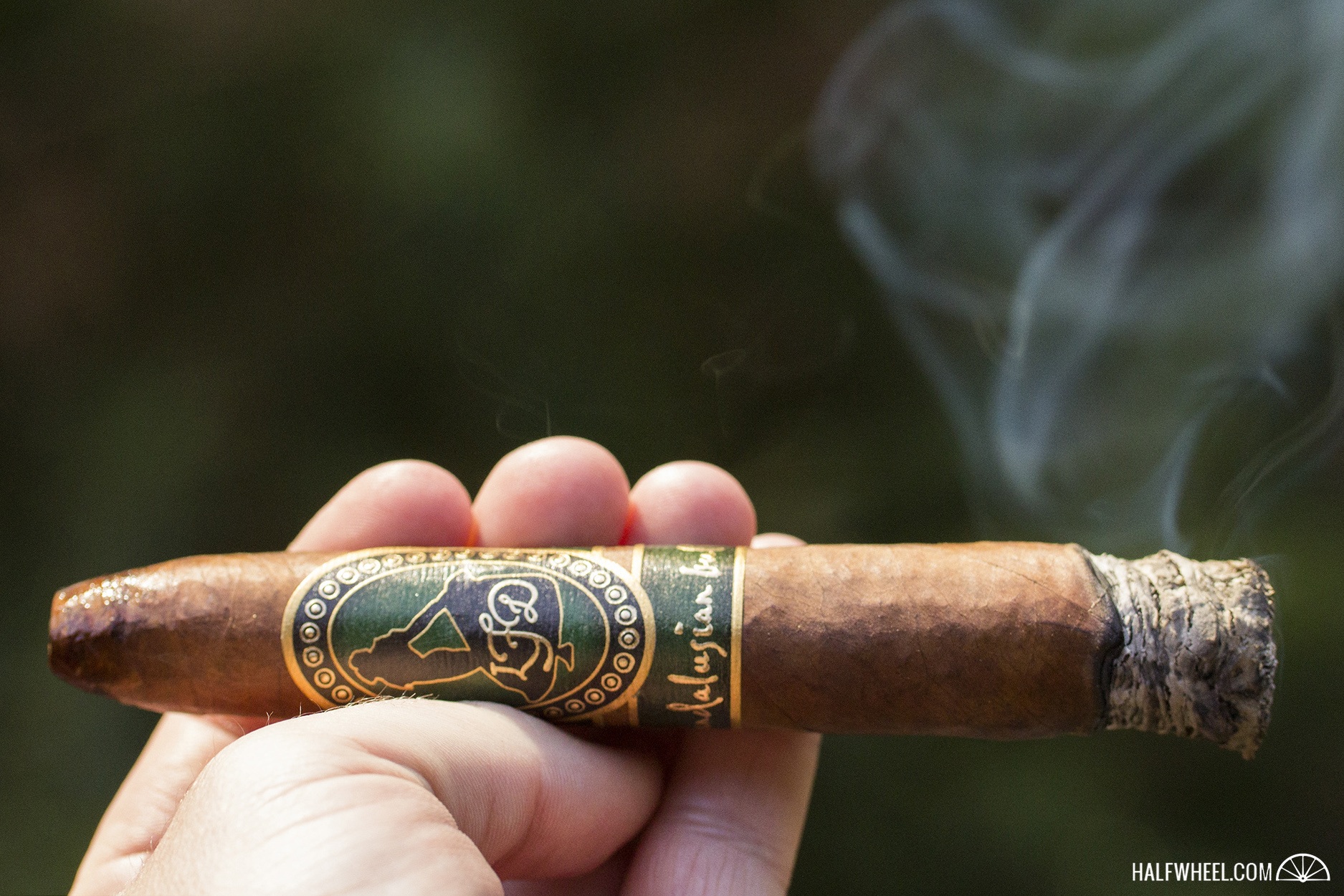 While the mint doesn’t hang around much after the burn line gets into the second third, the smoke keeps the cool texture present on the palate while retrohales provide an alternate spin by way of a warm, peppery smoke. The overall profile continues to mellow until it becomes more of a medium-bodied, occasionally medium-minus strength profile, gracing the palate with more modesty than strength. Smoke production picks up just past the Andalusian Bull’s midpoint as the flavor starts a journey to becoming much more vibrant, matching its previous mark established in the first inch of the first third. Pepper remains a key component, but there is now a bit of almost orange sweetness in the nose, while the tongue gets dry earth that has a certain terroir yet doesn’t convey many flavors relatable to food or other sources. Both senses also get treated to a much more lingering finish, which gives the pepper more time to do its thing. It’s also just past the midpoint where the time it will take to get through the cigar comes to a clearer realization, as it has been just over two hours and the Andalusian Bull seems content on staying on its own schedule. It’s here where the cigar requires the occasional relight as well, though for the most part it has been burning quite well even after slightly longer than normal breaks between puffs. 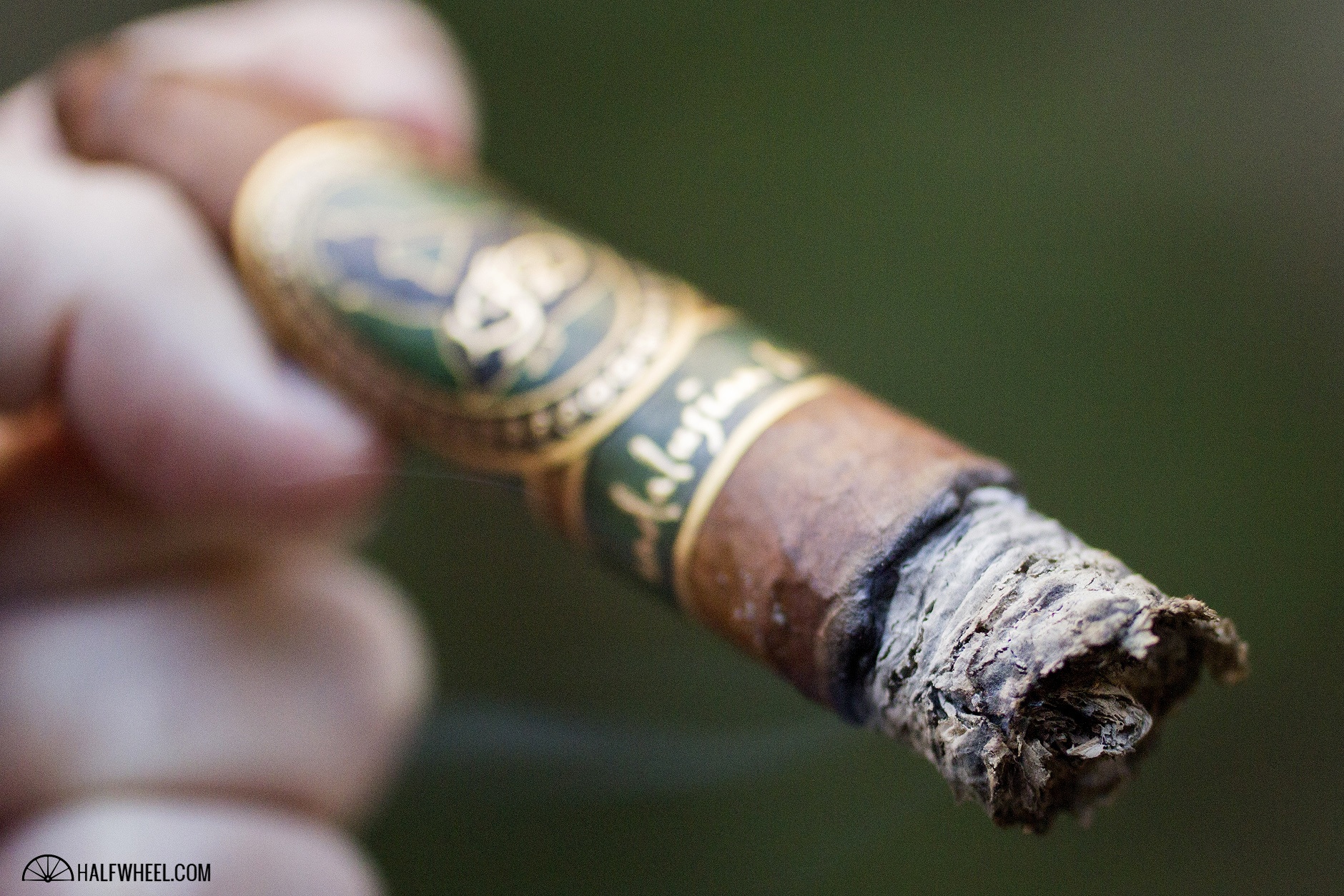 If the lack of pepper in the middle portion of the Andalusian Bull was becoming a concern, rest assured that it comes raring back for a return appearance at the start of the final third, hitting both the tongue and palate with good amounts of strength. The cigar gets a bit more robust in the final third as the earthy note turns rocky and the pepper is a bit less refined. It also sets a new fulcrum point that the blend must contend with to maintain its balance; certain puffs do a good job of toeing the line of strength and flavor while others seem to overstep and tread into notes that are either too rough or even colored by unbalanced minerals and sourness. Given both the decreasing ring gauge of the cigar and the approaching hot core, it’s a multi-variable problem that leaves me without a definite culprit to point to, and one that creates a challenge for the blend to navigate, let alone me by trying to adjust my rate of puffing in order to get the smoke to stay cool. The burn and draw remain fantastic all the way to the cigar’s final puffs as the cigar mellows just a bit but does show a fleeting touch of heated harshness. 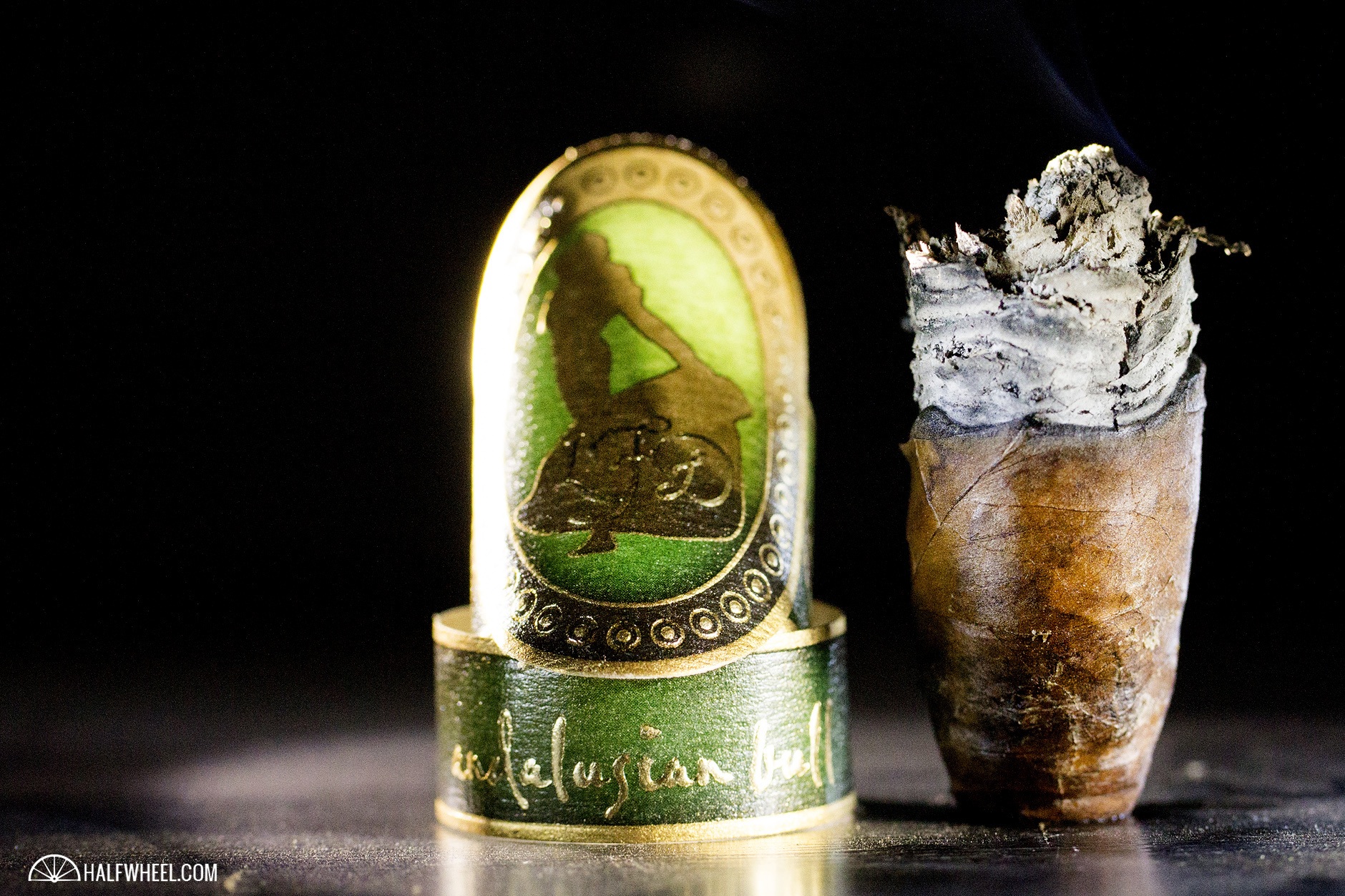 There’s little question that the Andalusian Bull blend is a winner; it is dynamic and offers an evolving journey of flavors and strength from start to finish, with the first two thirds showing hardly any issues in terms of balance, while the final third does a decent if not perfect job. My issues lies simply with the size, as you have to commit nearly three hours to enjoy it completely. Thankfully the tapered head reduces the awkwardness a good bit, and if you’ve got the time, the Andalusian Bull has the goods to reward your investment.