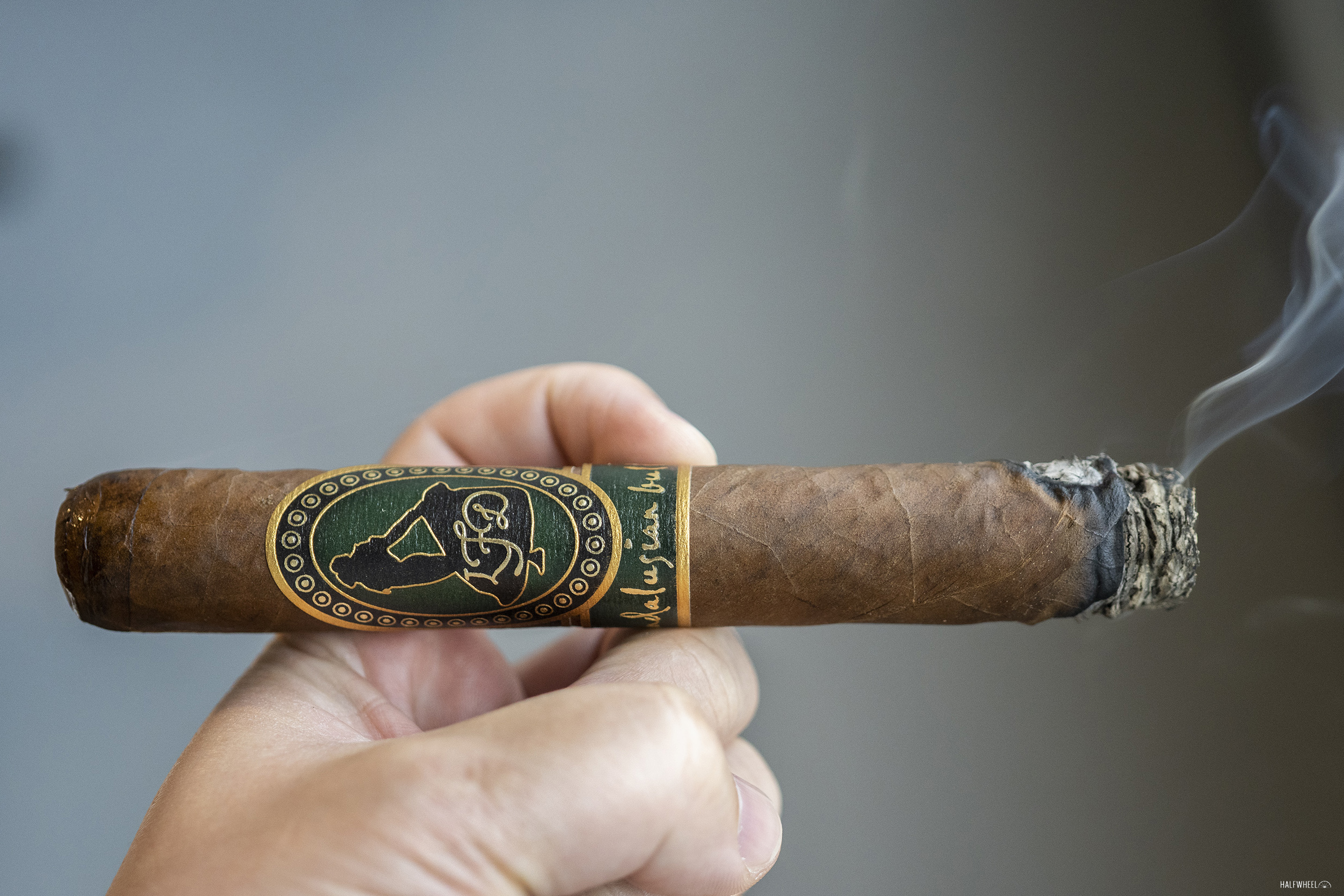 There are some cigar shops that are specifically branded to be associated with a cigar brand, such as Casa Fuente, the Davidoff of Geneva — since 1911 stores, or La Casa del Habano franchises. But amongst the non-branded stores, there is one store that stands out as having a unique relationship with a specific cigar brand: Jack Schwartz and La Flor Dominicana.

Jack Schwartz Importer was founded in 1921 down the street from its current location in the Chicago Board of Trade Building. Its location—at the bottom of a historic building—is one of the more unique ones I’ve ever been to. There’s a certain energy that it has that it is tough to describe unless you’ve been there. 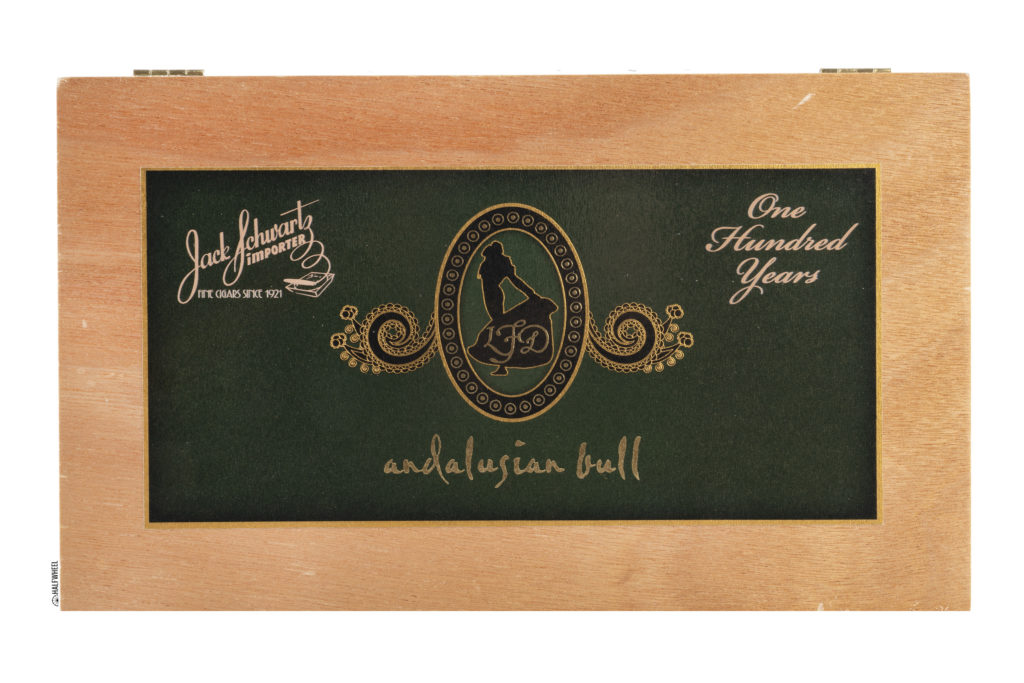 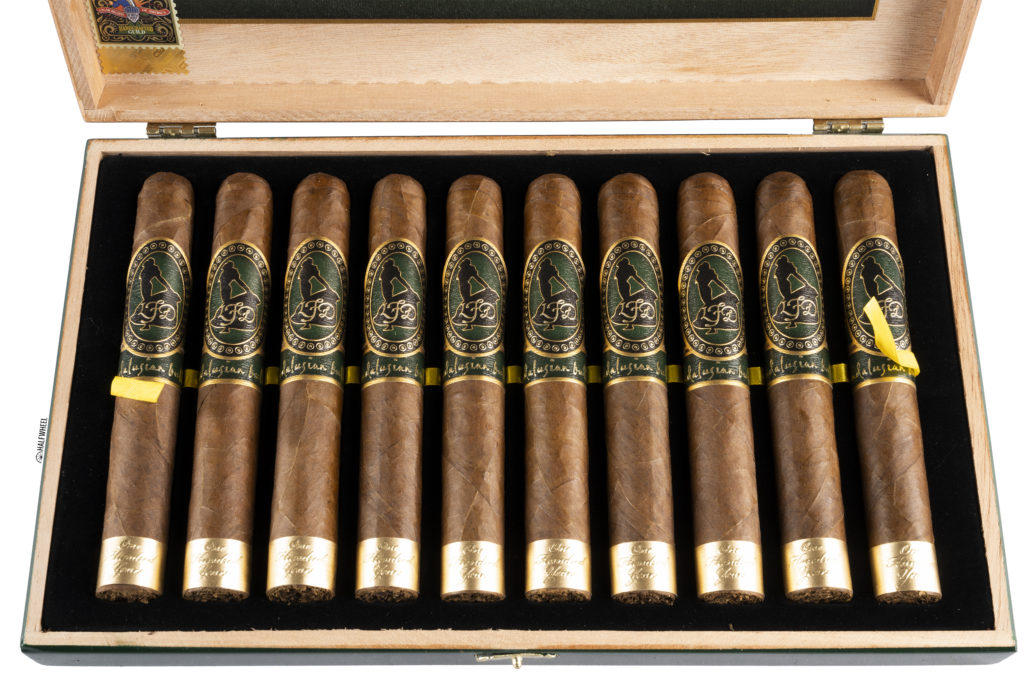 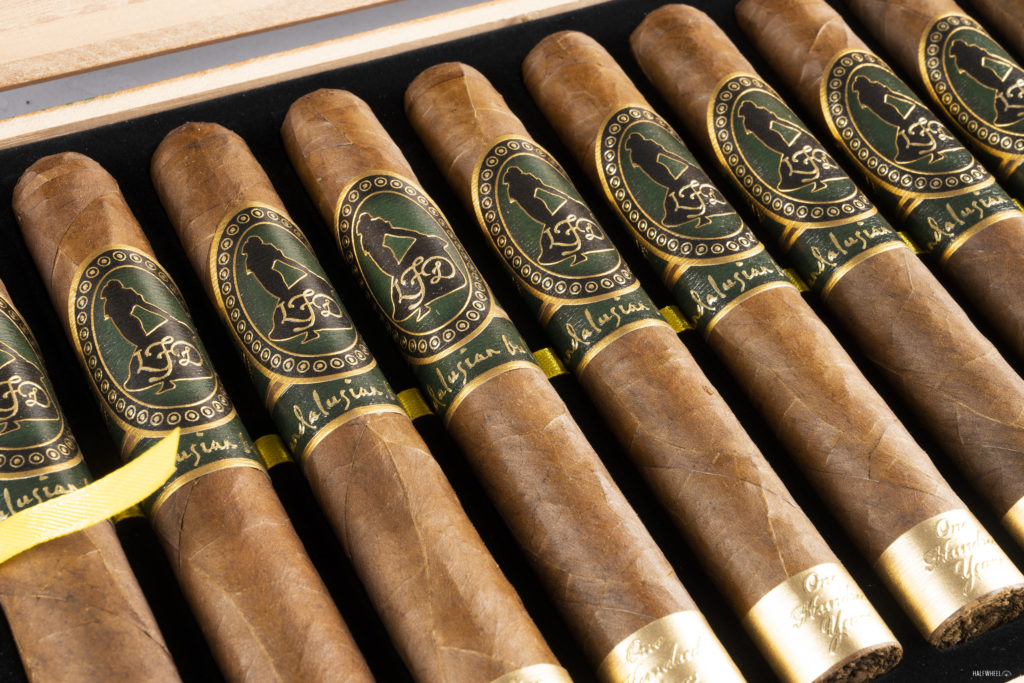 Given that 2021 marks the 100th anniversary of the store, it’s no surprise that there’s a cigar to commemorate the occasion. And if that cigar came from any company besides La Flor Dominicana, it would have just felt wrong.

That being said, I was a bit surprised when I saw the 100th anniversary cigar for the first time. It’s a 6 1/4 x 54 toro extra version of the La Flor Dominicana Andalusian Bull. That means it uses an Ecuadorian corojo wrapper over a Dominican binder and Dominican fillers that are grown at Estancia La Flor de Palma, the farm shared by La Flor Dominicana and Tabacalera Palma.

While many would think that this is just the second size of Andalusian Bull, it’s actually the fifth. There’s the original cigar, two other vitolas that were sold in a charity humidor in 2017, and then the Toritos, a cigar that is privately offered for sale to members of La Flor’s Fleur D’Or Club, which requires the purchase of a $16,000 cigar cutter.

Production is limited to 1,000 boxes of 10 cigars, the first 300 of which arrived in late September. 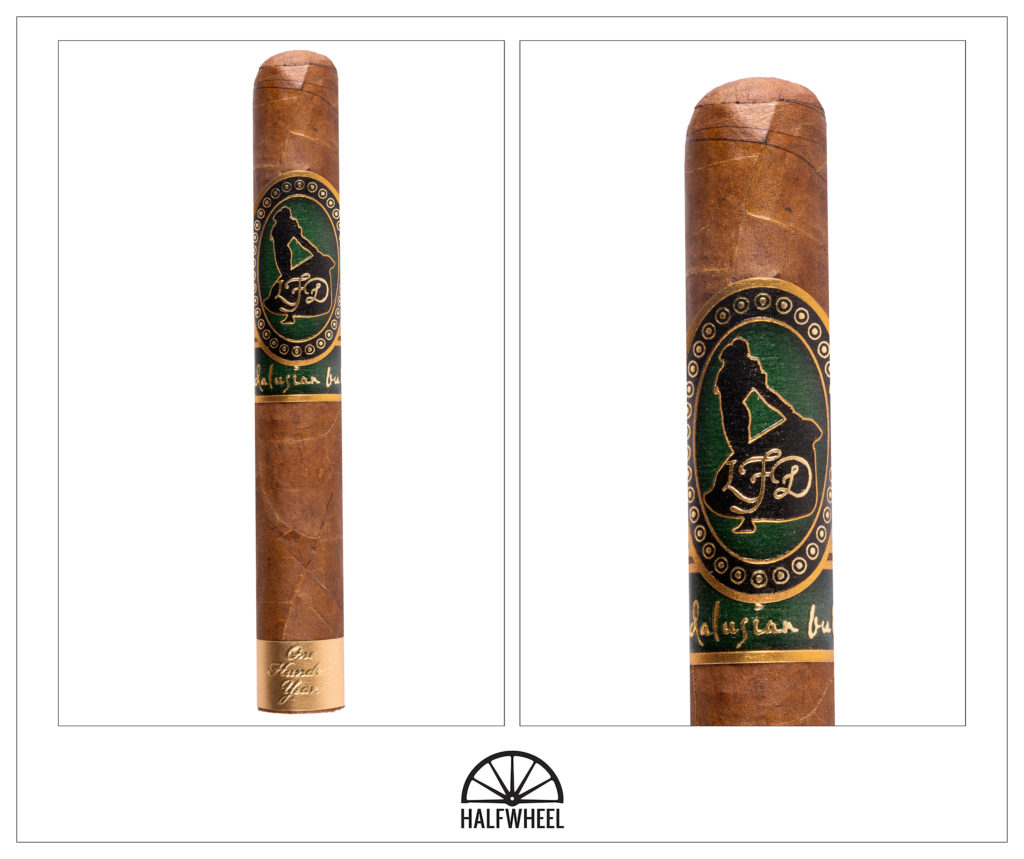 While the Andalusian Bull is hardly a cigar I smoke on a regular basis, I think the wrappers for this box are a bit redder than normal. The cigars are well-rolled and the wrappers are oily, though the veins are quite noticeable and, at times, very thick. On one cigar there’s a thick enough vein that I can see an outline of it sticking out from underneath the foot band. These cigars aren’t shipped in cellophane so it’s not surprising that the aroma is barely medium, only providing some scents of oak and nuttiness. That being said, when I open the box, it’s pretty fragrant. The aroma from the foot is medium-full with floral scents, cinnamon candy, sweet cedar and some black licorice. Cold draws have flavor of oatmeal, sourdough bread and something that reminds me of a chemical flavor, almost like a vodka.

The La Flor Dominicana Andalusian Bull Jack Schwartz Importer 100th Anniversary—what a mouthful—starts out pretty pedestrian. It’s not bad, but it’s just a lot more normal than the pre-light process might have suggested it was going to be. There’s an earthy core that also has cedar, some barnyard-like flavors and an underlying sweetness. I find the draw to be a bit tight, though the smoke production is quite impressive, no doubt helped by how thick the smoke seems to be. Cedar takes over as the main flavor—not that much of a change—but there’s a good amount of creaminess underneath that, along with a rotating cast of sweeter flavors that includes peaches, raisins and something that is close to a cola flavor. One sample has some herbal flavors, though it works decently with the profile. The finish has creaminess, Ritz crackers, saltiness and some oak. Retrohales have earthiness, roasted peanuts, cola and some sharp lime; the latter really makes things very unique as it gives the retrohale this peculiar edge that isn’t common. Its finish sees the flavors calm down, but it’s creaminess, lime and roasted nuts. Flavor is medium-full, body is full and strength is medium-full. The draw could be a bit better, but it’s fine for me, and the other construction elements are quite good. 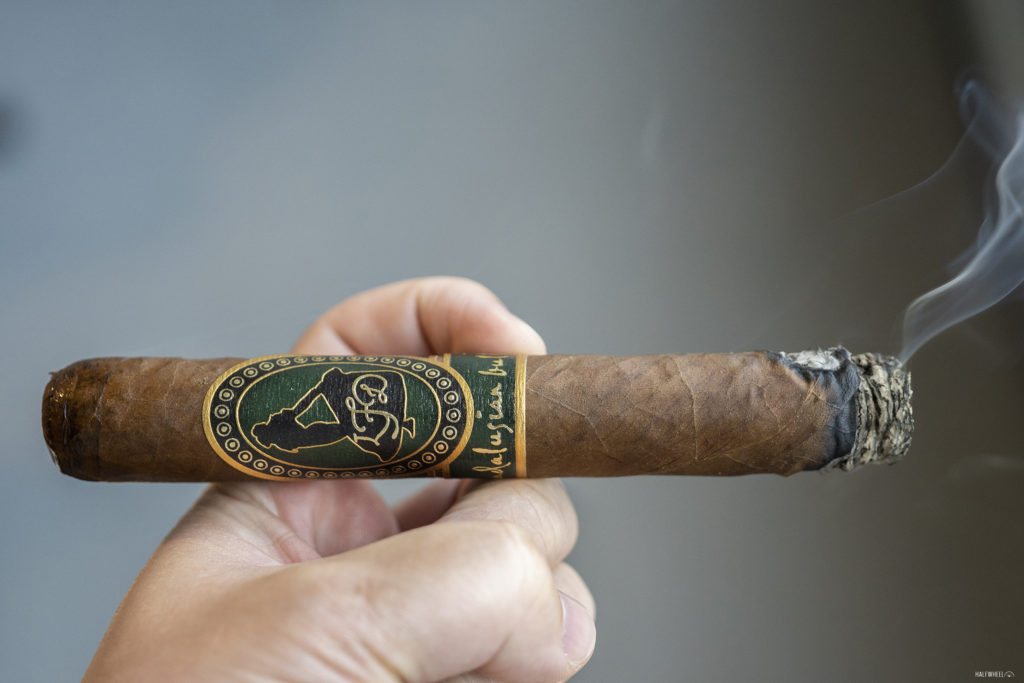 While the cigar gets toastier in the second third, it’s not the normal type of toastiness. Rather than the isolated burnt flavors, this seems more like a crisp toastiness gets added to certain parts of my tongue. The Ritz cracker flavor seems to intertwine itself with the cedar and toastiness, which leads the profile up until the halfway mark. After that, it begins to recede a bit, though remains part of the profile. A decidedly milky creaminess adds itself to the mixture joining the citrus flavors from earlier, dry pasta and an underlying pepper. The pepper and creaminess remind me of what happens when I put too much pepper into a roux. The finish has Ritz crackers, the milky creaminess, oak and coffee. Retroahles continue to be edgier than the main profile. There are generic cereal flavors, herbal flavors, espresso, the sharp lime and lots of white pepper. While the profile is quite sharp when the smoke is still in my nose, once it leaves a honey sweetness mixes with the creaminess and cereal to help smooth things out. There’s also some cedar and white pepper, but the finish of the retrohale is much smoother than when the smoke is in my mouth. Flavor is full, body is medium-full and strength is medium-full. Of note, the retrohales are much more intense than when the smoke is in my mouth. Touch-ups are needed to help with a declining smoke production in the second third, something I imagine might have not been needed with a slightly better draw. 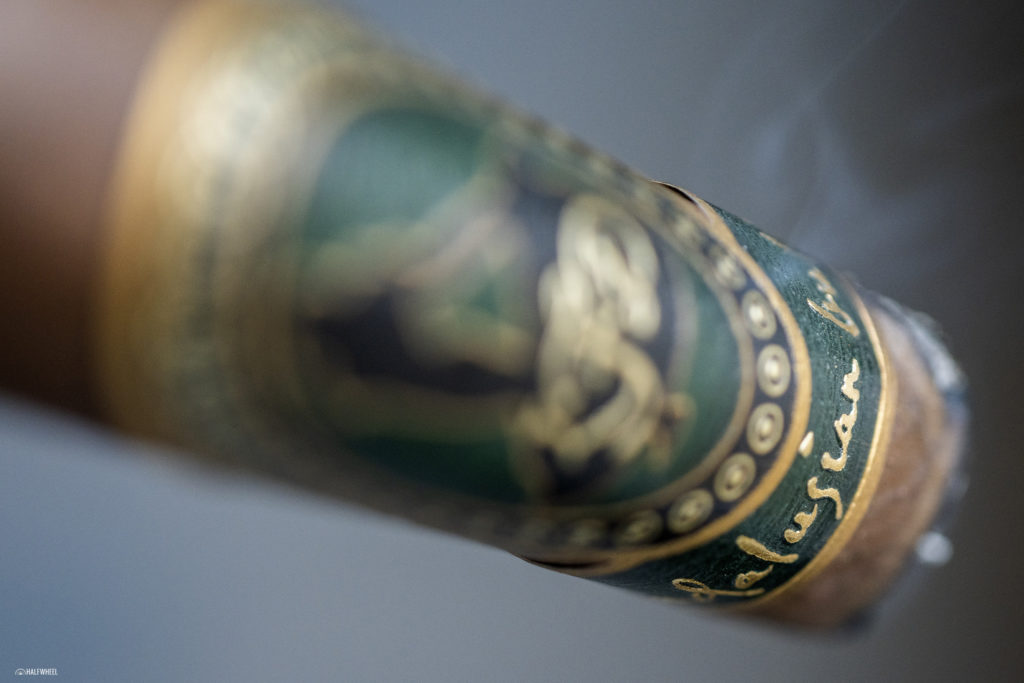 The final third of the La Flor Dominicana Andalusian Bull Jack Schwartz Importer 100th Anniversary sees the earthiness return to the top spot, joined in the charge by black pepper. There are still remnants of the second third—oak and some burnt coffee—though it’s pretty easy to tell that the profile has dramatically changed. When the smoke is in my mouth, I’m not able to develop the longest list of flavors, but it gets pretty interesting once the smoke has left my mouth. There’s earthiness, hay, leather, some generic whiskey flavors, a bit of barnyard and something that reminds me first of eggs, then—a few puffs later—sort of like a dough, and eventually like a pasta. Retrohales have peanut shells, caramel sweetness and some perfume-like flavors like lavender. The finish of the retrohale sees the hay flavors pair with the earthiness. At times I feel like I can taste some barnyard flavors, but that also might be the hay sensation tricking my mind. There’s also some soy sauce, black pepper on the throat, and a lingering saltiness in my mouth. Flavor is full, body is full and strength declines to medium-plus. Construction is similar to the second third: the draw is a bit tight, the ash is even, but the smoke production needs some help from time to time.

What struck me about the La Flor Dominicana Andalusian Bull Jack Schwartz Importer 100th Anniversary is that it doesn’t taste like either of the other two Andalusian Bull vitolas I’ve smoked previously. It’s certainly closer to the regular La Flor Dominicana Andalusian Bull than it is to the Toritos, the 6 1/4 x 41 vitolas that Tony Gomez can regularly be seen smoking. To me, it’s a blend that is just a bit too excited for its own good, though I suppose that makes it a good candidate for aging. As far as this review is concerned, the issues are likely more related to the minor construction issues than it is to the flavor. One thing is for certain, the cigar tastes like a La Flor Dominicana, which makes all the sense in the world.