If you’re familiar with the Dominican Republic and its cigar industry, you’re almost certainly familiar with La Aurora, the country’s old continuously operating cigar company, with its history dating back to 1907.

You also might be familiar with the annual Procigar Festival, the annual February gathering of cigar lovers that celebrates the country’s cigar industry. While primarily a celebration of existing products, the festival has occasionally been the place where a new cigar launches. Such was the case in 2018 when La Aurora unveiled a new, limited edition cigar called the La Aurora Hors d’Age.

The name, which is French for beyond time, is a nod to the aged tobacco being used in the cigar, all of which comes from the 2006 harvest.

“Typically, the Preferidos line is aged at least eight years from seed until it is a product,” Manuel Inoa, La Aurora’s master blender, explained in a video about the cigar. “In this cigar, we have invested in time. From seed to cigar, we have invested twelve years,” he noted, adding that the typical flavors and strength that identify the company are all incorporated into the blend.

This 12 years includes an extra year of rest in the factory’s aging rooms; the band bears the year 2017, which is when it was originally slated to come out.

The company gave the cigar its full industry debut in July at the 2018 IPCPR Convention & Trade Show before shipping it to retailers in September. Just 6,000 boxes of 15 cigars were produced for worldwide distribution, a total run of 90,000 cigars for the regular size. However, the company also created a special humidor, which featured 146 cigars of various sizes. That humidor was sold for $5,000.

As for the cigars, they are made using a very non-Dominican blend, with an Ecuadorian wrapper and binder, while the filler contains Colombian, Dominican and Nicaraguan tobacco. The thick, beefy La Aurora Hors d’Age is an impressive specimen in size, as well as by way of the prominent band with the lion logo and metallic gold for which I have a long-term fondness. The wrapper itself is a bit on the oily side, definitely veiny, and offers a bit of very fine texture for the fingers. While the color is generally even, there’s a bit of fine mottling to be found on the leaf, and all together creates for a visually rich leaf to inspect. It’s a firm cigar offering little to no give among the three samples, well-capped and with no noticeable imperfections. The foot is both sweet and woody, mixing a bit of strawberry jelly with old furniture and dried tree bark. The cold draw ranges from just slightly firm than perfect up to a bit tight with muted flavors of melted vanilla ice cream, subtle earth notes and just a touch of pepper.

The first of the three cigars takes a bit longer than anticipated to get fully toasted and combusting; while the La Aurora Hors d’Age is a thick cigar, the tobacco also seems on the heavier side, which has me thinking I should use a bit more than a flat flame lighter for the other samples. The cigar takes a few puffs before beginning to unfold its flavors of woods and black pepper, backed by a bit of vanilla sweetness that seems to be jostling for attention. While I wouldn’t say the profile starts out as muted, it definitely becomes clearer and brighter by the time the burn line is about an inch into the cigar, almost as if coming around the corner and into a concert: you could hear thing pretty well, but then it really becomes bright and clear. A dense, dark gray ash starts to build and holds on well enough to get me nervous about just how much is accumulating. After the first clump drops, I get a bit of warm root beer from the aroma, highlighted by a bit of molasses and modest amounts of pepper and spice. After a fairly vibrant start, the La Aurora Hors d’Age mellows just a bit heading into its second third but it is still plenty flavorful and peppery, with the balance shifting towards the latter of those two terms. 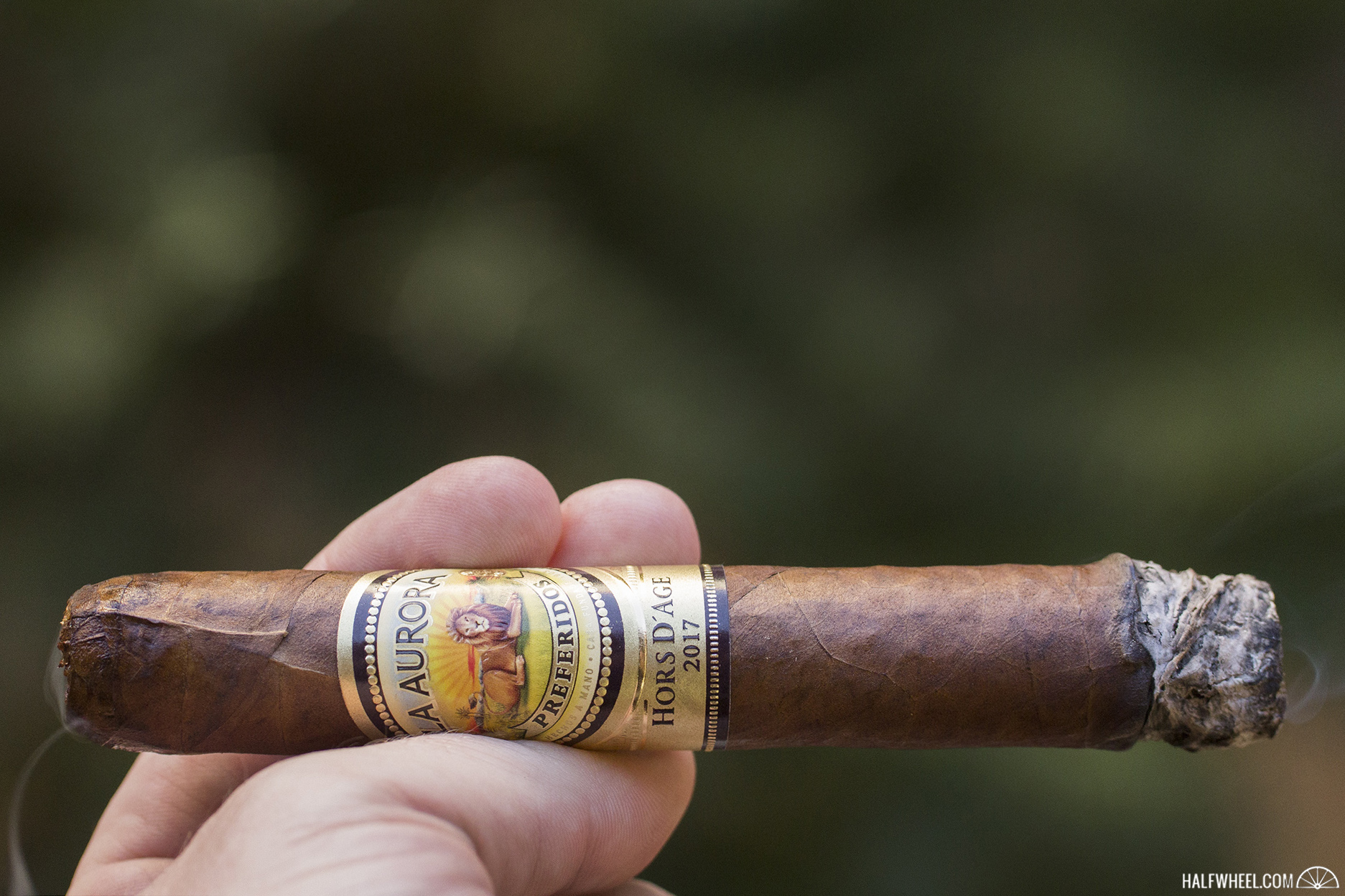 The first appreciable change in the La Aurora Hors d’Age’s profile is a bit of chalk coming into the fold, hardly sour or an outright negative but a flavor of which I’m not inherently fond. It works here for a bit, though I’m hoping it’s a transitional note and not something that overstays its welcome. It does proceed to gradually drift away, replaced by a smoky and peppery flavor that has me thinking of a piece of meat that has just been placed on the grill. While generally firm, the second sample’s draw opens up just ahead of the midway point, and the difference is appreciably better, and that’s without taking any flavor notes into account. From there, it’s on to more notes of earth and wood, with pepper largely relegated to retrohales, which are quite enjoyable and leave a solid tingle in the nostrils. The pepper gets a bit charred just before the final third, a flavor that has been either love-or-hate in my book, and while it’s not bad for a few puffs, it can quickly get to be a bit overdone, more in the first sample than the second. The draw, while still a bit tight on the first sample, is problem-free, with no touch-ups needed and plenty of smoke production. The start of the final third of the La Aurora Hors d’Age returns the cigar to the bright flavor profile from the first third as white pepper enters the mix, with retrohales now incredibly clear and almost singing. It doesn’t quite get gruff or rough, but the smoke—at least in the second sample—imparts a bit more of a textured sensation on the tongue that creeps down towards the throat a bit as well. On the tongue, the flavor moves towards a very dry wood flavor that has its own distinct effect and sensation, pushing pepper completely out of the way to become a solo act for several puffs. Whereas the cigar had been quite smooth to the area where the band would be, it is now much more textured and interested in latching onto the taste buds, accompanied by a bit more pepper and strength. The second sample has a bit of trouble burning the outermost leaves, leaving the middle to tunnel a bit, while the third’s burn line gets wavy, but otherwise, the La Aurora Hors d’Age finishes up still burning well with good smoke production and smooth draw. 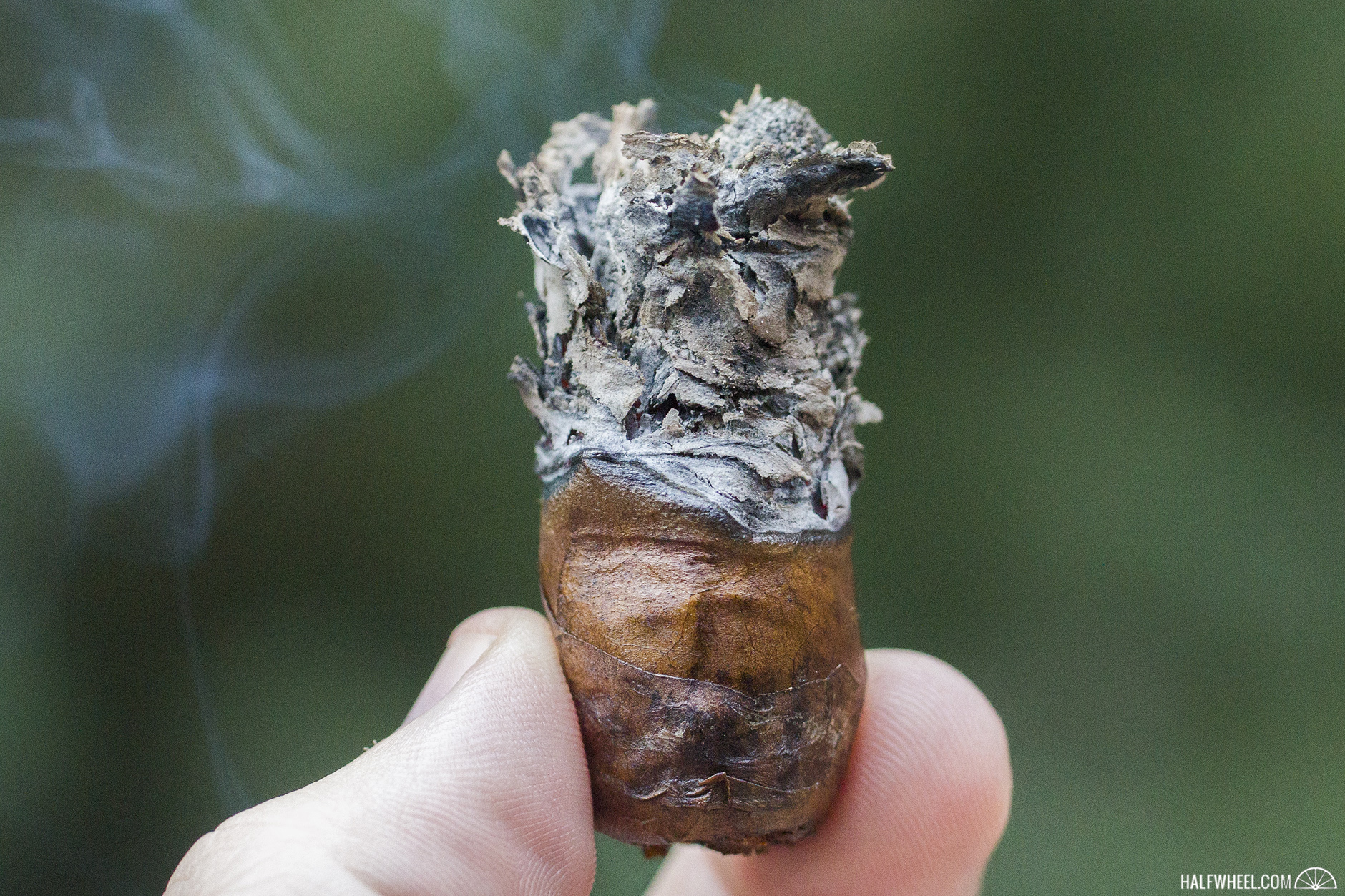 While the age statement of the tobaccos used for the La Aurora Hors d’Age could certainly be the headlining part of the cigar, as well as the easiest one to latch onto, I found Manuel Inoa’s statement about this cigar containing flavors and strength that are identifiable with La Aurora to be the most interesting aspect. It’s certainly a challenging and seemingly impossible task, given both the range of the company’s portfolio and the limitations of cigar construction to allow for such a creation. Of course, the statement has to be taken with a bit of interpretation, and when doing that, it does reframe the cigar and shows it to be quite capable of hitting the lofty goals set for it. Even with a dozen years of age the tobacco is vibrant and capable of keeping the palate engaged from start to finish, with good amounts of pepper adding the kick on top of a profile that spends a good amount of time with woody flavors while intermingling some earthiness. I’ll temper my inherent issues with the beefy vitola as the blend does more than enough to shine brightly and have me focused on it rather than the vitola. Overall this is one of the better blends I’ve smoked from La Aurora in recent memory and one I’d highly recommend for someone looking for a rich, complex and balanced cigar with which to spend some very enjoyable time.