If there is one thing that cigar manufacturers know how to commemorate it is important dates in their company’s history, and the latest La Aurora blend to ship to retailers does just that.

The name of the cigar is La Aurora 1985 Maduro, the fourth addition to the company’s Time Capsule Series, which is made up of lines named after the years that La Aurora debuted specific blends using specific wrappers. Past members of the series have included the 1903 Cameroon, 1962 Corojo and 1987 Connecticut, all of which carry monikers that make it easy to discern the wrappers they are celebrating.

In the case of the 1985 Maduro, that wrapper is actually a Brazilian maduro, leaf on top of a Nicaraguan binder and Nicaraguan fillers. The regular production release shipped in four different vitolas packaged in 20-count boxes last month:

Like the rest of the company’s lines, it is being rolled at the La Aurora S.A. factory in the Dominican Republic and is being distributed to retailers in the U.S. by Miami Cigar & Co. The La Aurora 1985 Maduro Robusto is covered in a dark espresso brown wrapper that is sandpaper rough to the touch and features both a number of veins and bumps running up and down its length. An inspection finds a soft spot just under the secondary band and the cigar is extremely hard when squeezed. The aroma from the wrapper is a combination of oak, earth, manure, leather, hay and raisin sweetness while the cold draw brings flavors of strong and distinct gritty earth, leather, black pepper, nutmeg and cocoa nibs.

Starting out the first third, the 1985 Maduro features a number of flavors, but the profile is dominated by only two: oak and bitter dark chocolate. Those are followed by notes of earth, anise, grass, espresso beans, leather tack and peanuts, along with a very distinct fondant sweetness on the finish. There is also a noticeable amount of black pepper on the retrohale as well as some spice on my tongue, but the latter seems to be fading almost as soon as I notice it. Construction-wise, the burn is a bit wavy, forcing me to touch it up a couple of times, while the draw is decent enough so far. The smoke production is easily in the average range, while the overall strength increases quickly enough to hit a point just under medium by the time the first third comes to an end. Unfortunately, the fondant sweetness that increases the complexity of the profile during the first third drops off of a cliff just as the second third begins, leaving the same oak and bitter dark chocolate as the dominant notes. There are some changes to the secondary flavors, including the addition of oatmeal, almonds and sawdust, all of which fight for space along with the earth, leather tack and grass notes that are still present. While the fondant sweetness is long gone by the halfway point, it is replaced by a faint creamy milk chocolate note that combines nicely with the black pepper that remains on the retrohale. Thankfully, the burn has improved noticeably while the draw continues to impress throughout the middle third and the overall strength increases enough to reach the medium mark by the end of the second third, although it seems to stall there for the time being. 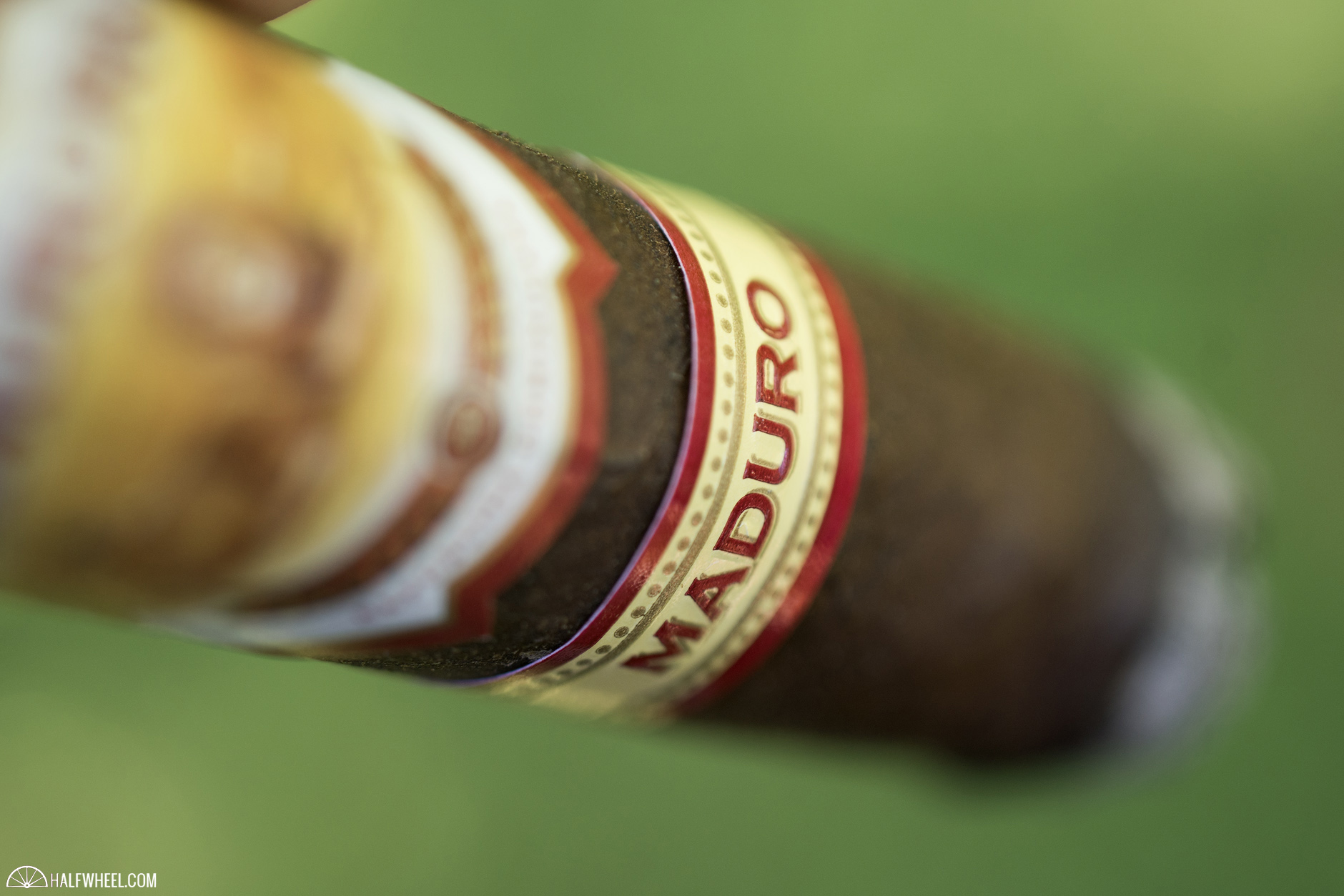 The final third of the La Aurora is an almost exact copy of the preceding third, including dominant flavors of oak and bitter dark chocolate, followed by flavors of oatmeal sawdust, almonds, earth, and grass. Both the milk chocolate sweetness and the black pepper increase on the retrohale, leading to a slightly unbalanced profile that continues until I put the cigar down with a little less than an inch left. Both the burn and the draw give me no issues whatsoever, while the strength remains just about where it started the second third, firmly in the medium range. If there is one thing I am a sucker for, it is a cigar with a good background story and the La Aurora 1985 Maduro fits that bill nicely. Having said that, the profile of the blend is fairly standard, with earth, oak and dark chocolate easily taking the top spots for pretty much the entire cigar. There was a moment of complexity to be had—specifically the fondant sweetness on the finish in the first third—but unfortunately, it waned noticeably after that, leading to a significantly less nuanced profile for the final two thirds. In the end, the La Aurora 1985 Maduro was an enjoyable cigar that falls far short of amazing but fits the bill nicely as a blend featuring an enjoyable profile that is priced extremely well.