Earlier this year, La Aurora announced—no doubt with the help of a marketing company—that it was launching a new version of its 107 line. Some of it was rather easy to understand: it’s called 107 Nicaragua and made entirely of Nicaraguan tobacco.

Some of it was rather confusing as the company also said that was rebranding the entire 107 family to the “Tobaccos of the World Series.” What’s even more confusing is, well, everything about this decision.

First of all, the cigars are going to continue to be called what they were. And rather just saying something like “La Aurora 107 family,” the overarching collection of blends is now known as Tobaccos of the World. The company says the Tobaccos of the World series breaks down as follows:

You might think, “well, aren’t those countries where the corresponding blends’ wrappers come from.” In three out of the course cases, yes. But the La Aurora 107 Cosecha uses an Ecuadorian wrapper, not a Dominican one. And in case you were thinking, “well but the rest of it is all Dominican, right?” Nope, it’s also got tobaccos from Brazil and Nicaragua.

It’s also worth pointing out that La Aurora isn’t changing the packaging for the other products, meaning this is likely to be something that is just known by the people who wrote, approved and used the La Aurora press release announcing said “change.”

As for the 107 Nicaragua as a blend, it is the first Nicaraguan puro that La Aurora has created. It’s offered in five sizes, though only three of them are being sold in the U.S.

Further adding to the confusion, La Aurora announced and released the cigar this spring for international markets. At that time, Miami Cigar & Co.—La Aurora’s U.S. distributor—told halfwheel that it had no plans to sell the cigar in the U.S.

That changed in the fall, and in October, the cigars began arriving at U.S. stores. 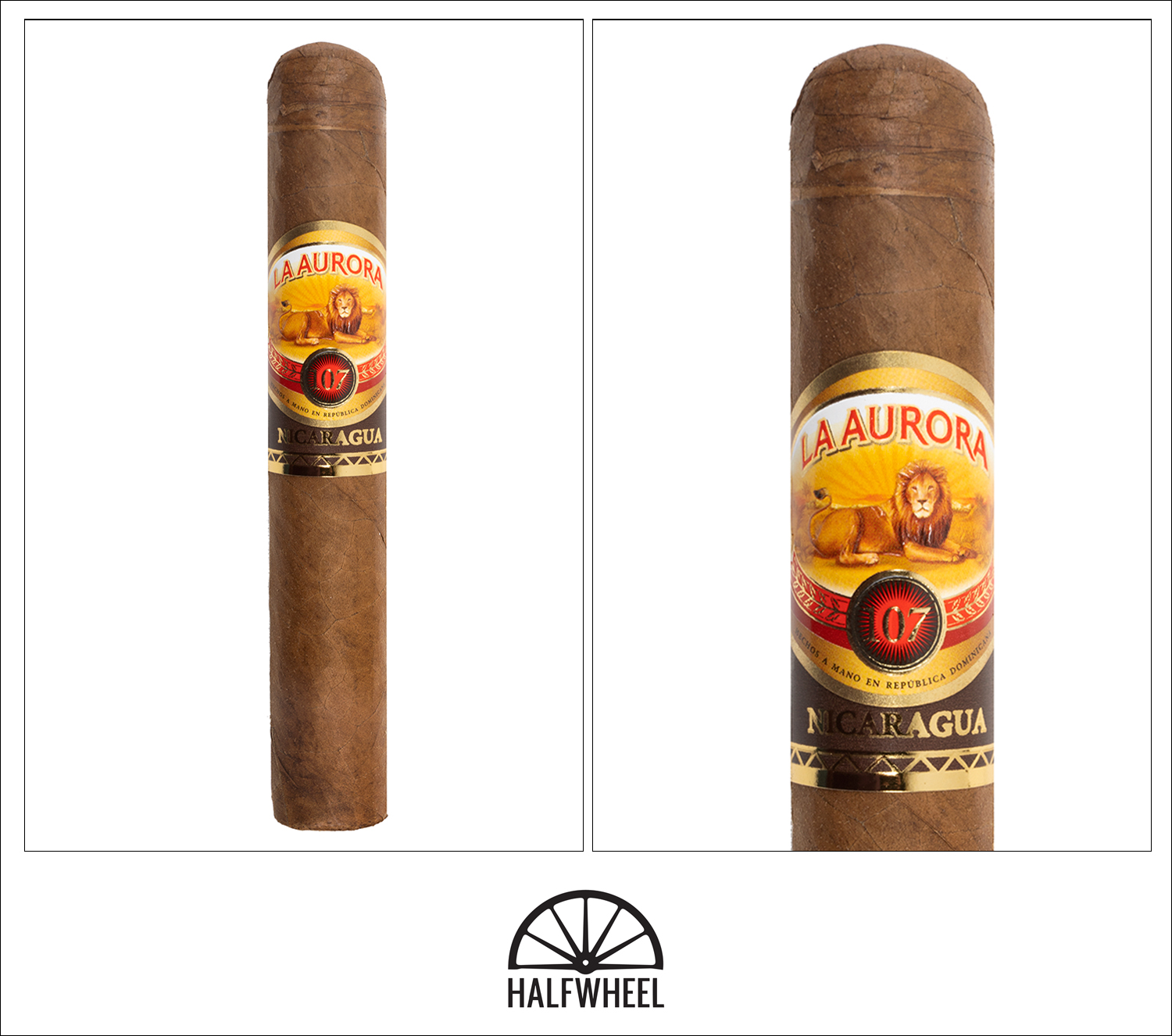 It’s a pretty-looking cigar, one that is probably a shade or two darker than the regular La Aurora 107, a cigar with which I’m rather familiar. Even without “NICARAGUA” on the secondary band, anyone that’s familiar with the regular La Aurora 107 should be able to tell that this cigar isn’t that just based on outwards appearance. The aroma from the wrapper is medium-plus with chocolate, leather, ammonia and some barbecue sauce. The foot is a bit stronger with chocolate, manure and an aroma that reminds me of the smell of a can olives. There’s more of that flavor on the cold draw, joined by some manure, spiciness and a bit of sugar sweetness. Individually, the cold draw flavors aren’t great. Collectively, it’s a bit foul.

The La Aurora 107 Nicaragua Robusto begins dry with toasted sunflower seeds and quite a bit of earthiness. Each puff seems to add a bit of nuttiness shortly before the one-inch mark and the profile is now being led by a pretty rich nutty flavor. It’s mixed with soy sauce and some apples, which creates a much more interesting flavor. Behind the core are earthiness and dry rubber. The finish has more nuttiness, popcorn and some meatiness that reminds me of fried turkey. Retrohales have cinnamon, nuttiness, salt, leather and a bit of white pepper. It leads to a finish that is similar though, now a mixture of cinnamon, nuttiness and a bit of meatiness. Flavor is medium-full, body is medium-plus and strength is medium. Construction is excellent. The only thing I’d point out is the cigar is burning a bit quicker than average, which isn’t a problem. 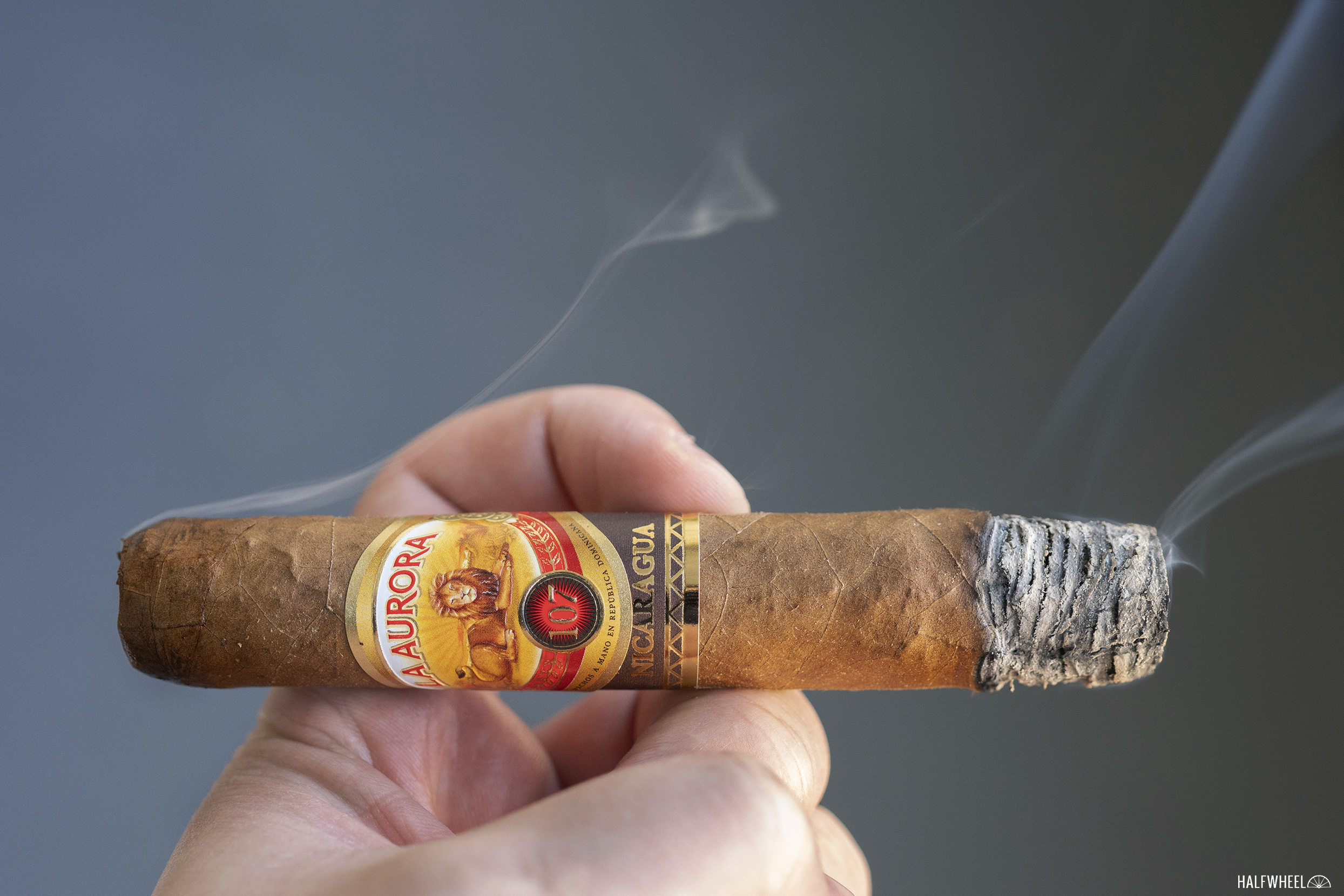 Nuttiness continues to be the main part of the La Aurora 107 Nicaragua, though it’s joined by a different cast of flavors. Now, there’s lemon, earthiness, whole coffee beans and white pepper. The finish goes through an even larger change, now chalkier with earthiness, some cognac flavor and a very sharp black pepper that goes pretty deep in the throat. Retrohales are fruitier thanks to both grapefruit and coffee beans. That combination is cut by coffee beans, cured meat, grassiness and white pepper. The finish is an interesting mixture of cinnamon, apple juice and black pepper. It’s not as detailed as it had been early on and the flavors don’t appear all at once. Regardless, it’s pretty crazy to think back to how this cigar tasted just before it was lit: like a can of black olives. Flavor is full, body is medium-full and strength is medium-plus. Two cigars make it through the second third without any construction issues, one cigar needs a touch up to help to keep it burning well. 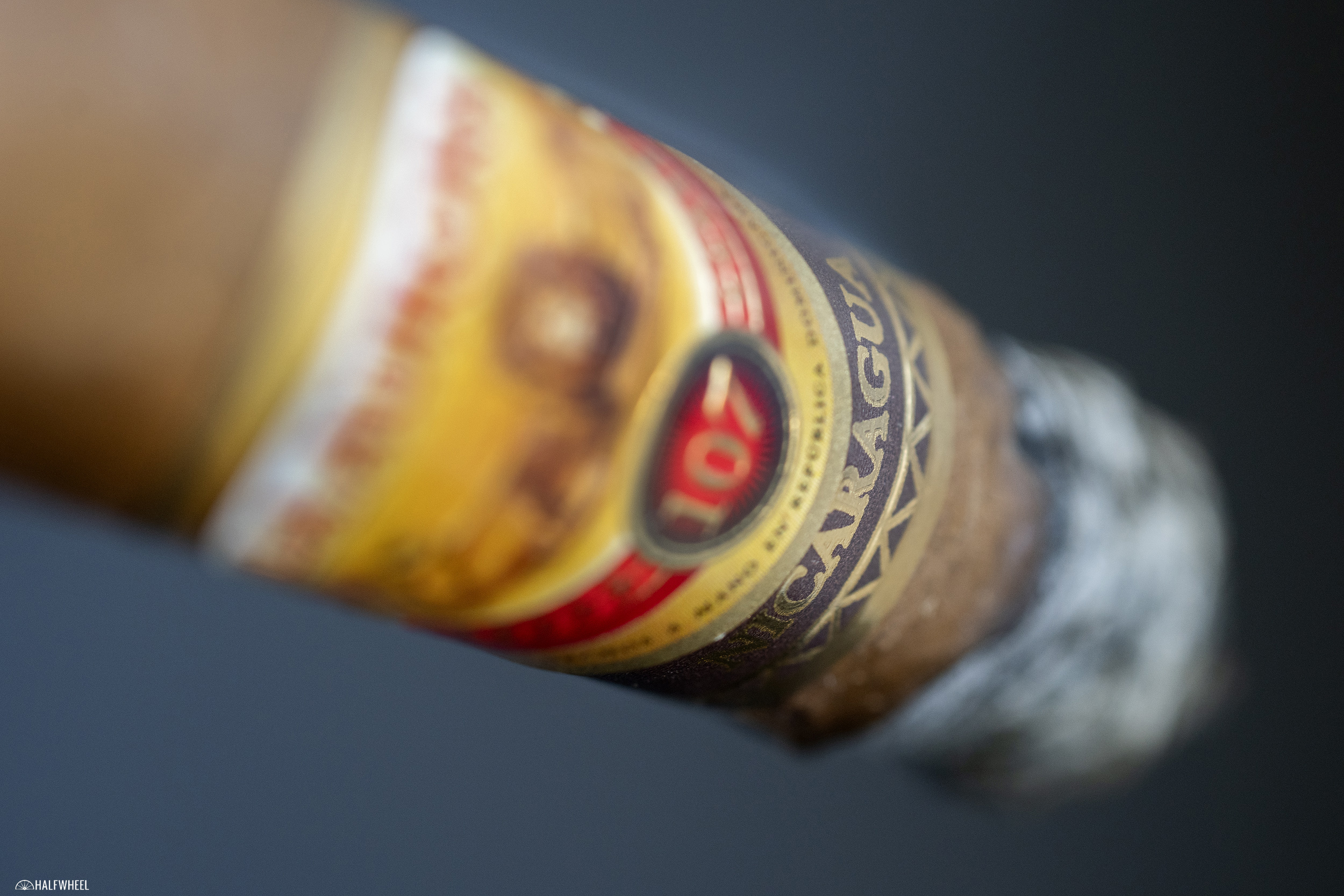 If you are hoping for a new flavor to take over as the dominant one in the final third of the La Aurora 107 Nicaragua, well, that’s just not going to happen. Nuttiness remains the leading taste, though popcorn is now the secondary flavor. It’s also worth pointing out that the role of a secondary flavor in comparison to primary and tertiary flavors is a bit different. The nuttiness is clearly the main flavor, the popcorn is the secondary flavor, but the gap between the popcorn and the rest is pretty slim. It’s a number of different flavors, though that seems more dependent on which sample I’m smoking. Sometimes it’s earthier with red pepper; one sample has more cinnamon than red pepper; another is grittier with leather and a mild tea sensation. The finish is mainly just earth, though there’s some grains and whiskey mixed in there. Retrohaling produces mineral flavors over top of some generic earthiness. It’s a pretty short finish, transitioning from earthiness to a mixture of creaminess and grass in only a handful of seconds. Flavor is full, body is full and strength is medium-full. Construction remains great until the end. 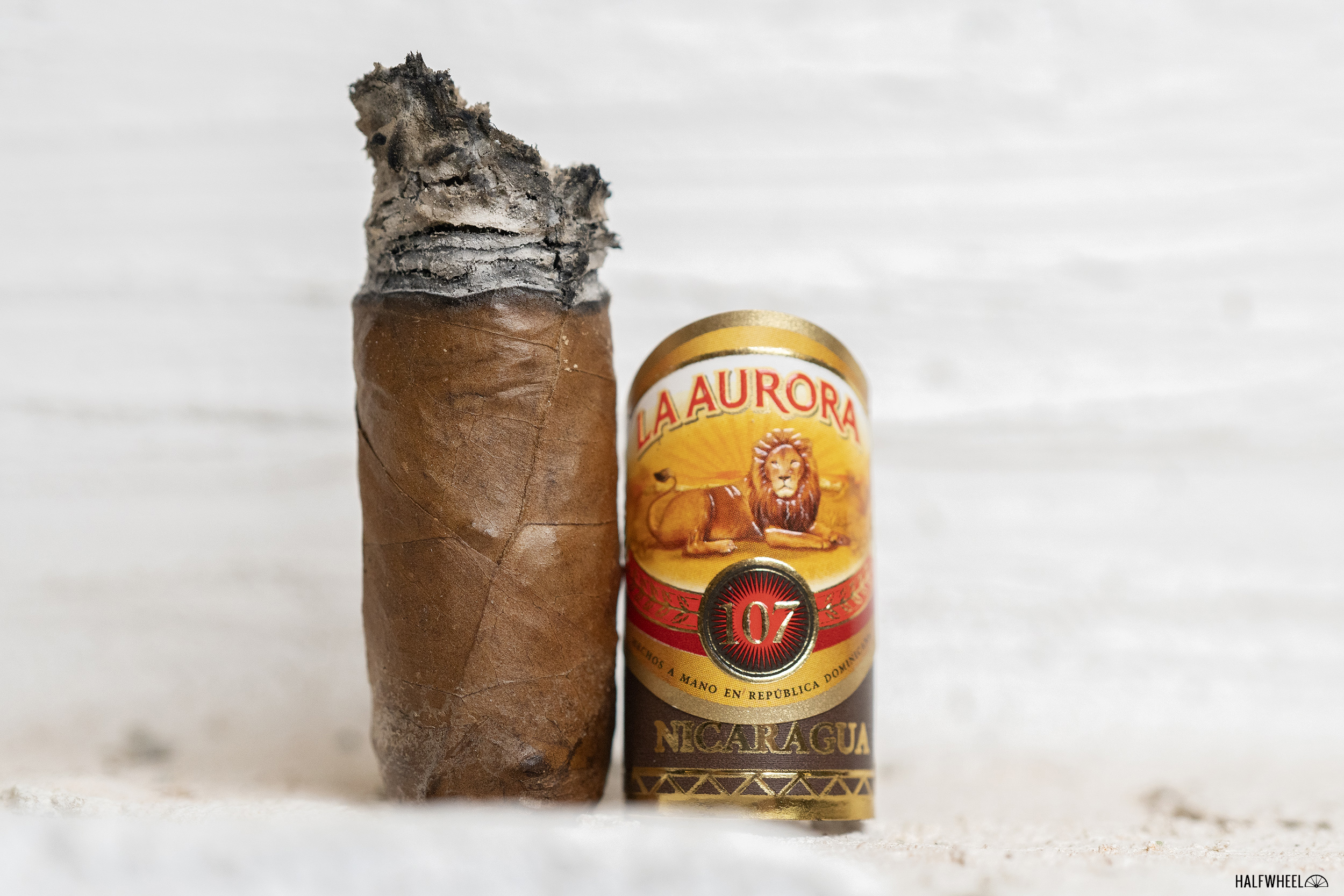