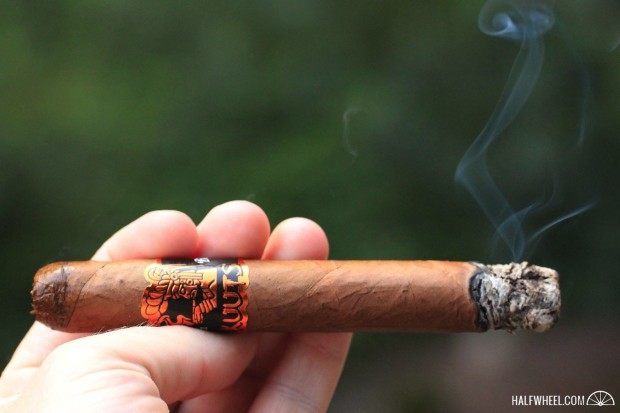 Just shy of a year after making its U.S. debut in April 2013, Kuuts, LLC announced it would be adding its fourth core line while seemingly trying to take advantage of the extended trend of Nicaraguan cigars and tobacco being some of the most talked about sticks on the market.

The Kuuts Nicaraguan Blend was announced in March 2014, with details released in late June of 2014 and the cigar debuting at the 2014 IPCPR Convention & Trade Show. It began to arrive at retailers shelves in September. It was also the first cigar released by the company to bear the Kuuts name.

While the company is known for its Honduran factory, it was no stranger to Nicaraguan tobacco, using it in all three of its other core lines, the Miró, Tabacalera Zapata and Placers Reserva. Yet the move to focus on it in this blend seemed to be an attempt to capitalize on a trend, something that was also seen a few other cigars such as the Cohiba Nicaragua that put the country’s name front and center.

Here’s what I said about the Kuuts Nicaraguan Blend Toro when I reviewed it in August 2014:

If there is one thing that I will give Kuuts, LLC a lot of credit for, it’s delivering consistently good cigars at very reasonable prices, and the Kuuts Nicaraguan Blend is no exception. With the most expensive cigar in the line topping out at under $7 before taxes, it’s pretty easy to suggest giving this a try when it comes out. It won’t necessarily wow you with complexity or the purest of flavors, but it will deliver a solid option for when you’re looking for a change of pace with a bit of strength, a touch of sweetness and an enjoyable flavor.

Since I reviewed the Kuuts Nicaraguan Blend Toro, the company has undergone a pair of personnel changes, as Gabriel Alvarez left for Maya Selva Cigars in late August 2014 after spending just over 18 months as the company’s operations director, helping launch them in the U.S.

Then in January 2015, Ramón Zapata, the founder, primary shareholder and chairman of Compañia Hondureña de Tabacos, LLC, announced that he had parted ways with the company, saying in a Facebook message that he was now “absolutely detached” from the project.

It’s hard to gauge the impact of both moves, though at a certain level Kuuts feels to have lost some of the momentum in the public eye that it had gained from Alvarez’s work, while the changes at the ownership level have yet to be publicly discussed.

The Kuuts Nicaraguan Blend still strikes me as being lighter than it should be, though I chalk that up to two issues: first, a bad stereotype that Nicaraguan tobacco should be darker, and that this cigar doesn’t use a Nicaraguan wrapper, but rather an Ecuadorian habano. It’s still a perfectly fine visual specimen with an almost copper tint to it that works well with the black and copper band. The small veins and seam lines that work together to create some visual texture, while the wrapper itself is fairly smooth to the touch. A gentle squeeze shows that the cigar is fairly uniform in its firmness, there is one spot just below the band that is really soft and shows much more give than the rest of the cigar. The pre-light aroma has a bit of dry earth to it but that comes across as distant in the nose, while a much more subtle orange zest note seems to stand out. The cold draw is a touch loose and shows an interesting earth and dry wood combination, reminding me a bit of a tobacco barn.

Right out of the gate I am greeted with a somewhat light and fairly dry wood note that offers a bit of tingle for the palate and nose but nowhere near what true pepper would deliver. It’s not quite sour, but there’s a bit of a funkiness to it that gets shed before the cigar has burned an inch off, freeing it up to pursue more noble flavors. Just like it did when I first smoked it, the Kuuts Nicaraguan Blend takes about an inch to really get going and delivering flavors, The smoke production early is pretty impressive and offers a bit of chalk and creaminess that is a perfect fit for a calm morning. The ash remains one of the weaker aspects of the cigar, quickly falling off around an inch in length and showing cracks up to that point. The cigar seems to need a bit more time after some seven months of rest in the humidor as it takes a bit longer for the flavors to really come out, but a bit of baking spice starts to emerge in the ambient aroma towards the end of the first third, and while the  flavors are struggling to embolden themselves, the overall strength of the cigar has taken a step forward and now offers a bit more of a physical reaction with each puff. The burn has been sharp and even with no touch-ups needed, though the flaky ash remains an annoyance as small chunks blow off with each puff. There’s a good bit more strength in the second half of the Kuuts Nicaraguan Blend but I also find myself struggling to keep it lit at times. The flavor is much fuller than it was earlier and now shows more of the earth and wood that I was expecting, with pepper starting to become more of a factor but still a fairly minor component overall, as it lets the earth do most of the talking. While I had some problems managing the retrohales when the cigar was new, they are now much more subdued, still offering pepper but without as much bang as before. For the most part balance has been spot on, and the flavor now lingers a bit longer on the palate than it did earlier, giving the system more time to process what the cigar offers. One thing that has largely disappeared from the cigar is the sweetness that I found originally, it’s only in the final inches that a touch of butterscotch starts to emerge but it could be easily overlooked as it is largely an underlying flavor. The flavors seem to plateau with just about two inches left, with a touch of heat coming along as the cigar burns to its conclusion that adds a bit more color but nothing of any major consequence. The burn line stays sharp and even down to the nub, which in this case is with about an inch and a half left.

One of the words I originally used to describe the Kuuts Nicaraguan Blend was 'noisy,' in that it seemed like the flavors had yet to mesh together and were a bit disorganized. Seven months of rest has certainly helped that as they are much more in harmony, yet they are also a bit more subdued and muted and I find myself missing that youthful exuberance, even if it means that the harmony wasn't as great. I'm still a fan of the Kuuts Nicaraguan Blend and think it makes for a wallet-friendly option when you're looking for a change-up to your routine with a balanced cigar that won't overwhelm the palate with outright strength.