Earlier this year, Kristoff announced the Kristoff Shade, a new name, but apparently not a new blend. According to multiple retailers—most notably Cigars International—the Kristoff Shade Grown is the cigar that was formerly known as the Kristoff Brittania Reserva, which debuted nearly a decade ago. It uses a shade grown Connecticut-seed wrapper from Honduras over a Dominican binder and fillers from the Dominican Republic and Nicaragua.

I reached out to Kristoff owner Glen Case both to confirm whether that was true and also wondering if it was true why that wasn’t disclosed, but haven’t heard back. Patrick Lagreid, who covered the Kristoff Shade Grown both before and during the 2019 IPCPR Convention & Trade Show, told me that nothing was ever mentioned about this being the rebranded Brittania Reserva. For what it’s worth, I haven’t run across any trade show coverage from other media outlets that mentioned a rebrand, though a few have mentioned it during reviews after the show.

For those wondering, the only difference I can tell based on specs between the Shade and the Brittania Reserva is that the latter was also offered in a 6 1/4 x 52 torpedo size which is not part of the Shade Grown line. 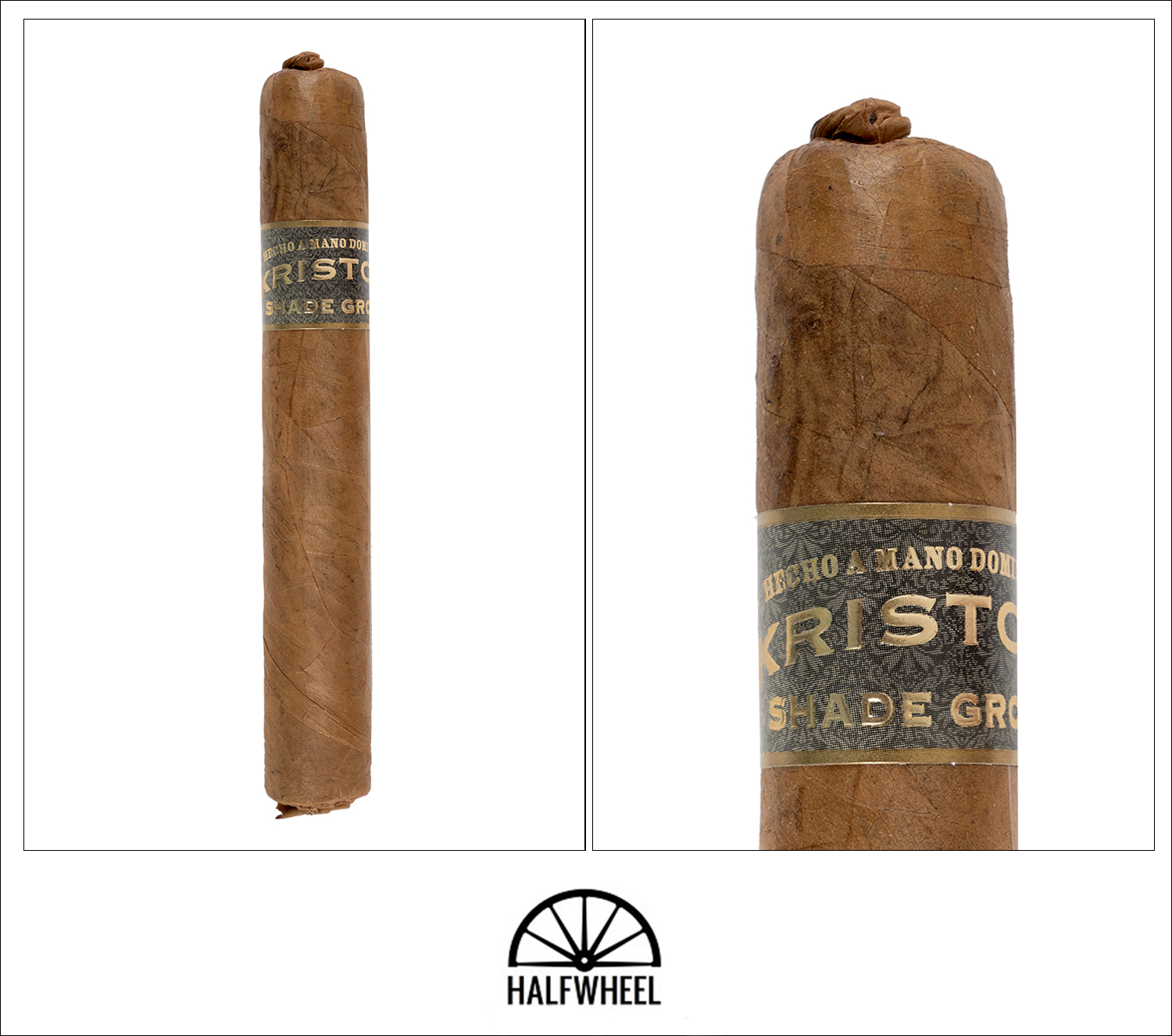 When I was a child I’d play around with car configurators and select every option just to see what it looked like. That’s sort of what seems to have happened here. There’s a pigtail, a flat cap and a covered foot; which is to say there is a lot going on with the appearance. It sort of distracts from the wrapper, which is far darker than what most people would consider to be shade. It’s also not the prettiest wrapper: a lot of veins, darker brown spotting and a somewhat dull experience. Aroma from the wrapper has lots of vanilla and not much else. The covered foot is similar, maybe more of a vanilla ice cream, though there’s also some raisin flavors and a bit of a fuller profile overall. Cold draws keep the raisin, lose the vanilla and have a sweet bread flavor along with some bitterness and spice.

After a pretty lengthy and only somewhat successful time lighting the covered foot, I take my first puff. It’s medium-plus with earthiness, creaminess and an underlying sweetness, collectively not a ton of distinct flavor. If you were hoping for a typical Connecticut shade cigar flavor, you should look elsewhere. The profile is much earthier than a Connecticut shade cigar, much earthier than most cigars, in fact. There’s also some creaminess, remnants of a raisin flavor and a very restrained pepper. The finish is somewhat drier than the mouth flavor with creaminess overwhelming the earthiness a bit. Retrohales are sharp and overwhelming enough that I only manage to take a handful of them during the first third. It starts calmly enough with a mineral flavor and some sunflower seeds, but a quarter second after the smoke has hit nose I get a blast of paprika. The finish keeps with the paprika burn along with some meatiness. Construction isn’t great on any of the cigars; two samples have issues with the draw, one of which is related to a tiny seam underneath the sides of the cap. Flavor is full, body is medium so long as I don’t retrohale and strength is medium. All three cigars need touch ups to fix the covered foot, which I don’t deduct points for, but they each also get another round of touch ups at some point during the first third. In just about every way, the second third of the Kristoff Shade Grown is better than the first. The main profile is still quite similar: a hearty earthiness on top of some creaminess, though the black pepper is seemingly gone. Retroahles are fruitier, occasionally creamier, along with more restrained versions of minerals and paprika. After the halfway mark, it actually takes a while for the paprika to breakthrough, almost 45 seconds after I take a retrohale before I can actually detect any semblance of it. Flavor is full, body is medium-full and strength is medium. Touch-ups are needed on two of the cigars, though in each case I get at least an inch and a quarter of solid ash without a touch-up, something I wish would have lasted longer. I had gotten to a point where I thought the Kristoff Shade Grown would continue to smooth out, perhaps even delivering its best offerings in the final third. That’s not the case, as seemingly out of nowhere, black pepper goes all over the tongue. It’s still quite earthy, but the black pepper is what really stands out. In addition, I still find the mineral flavors and there’s a fairly pleasant grainy flavor. Retrohales aren’t as punishing, but they are still dominated by paprika and earthiness. On the positive side, there is now some added lemon and sugar. The finish is similar to the mouth flavor, though I think the grain flavor is more intense than the creaminess. Unfortunately, the black pepper and earthiness overwhelm both. Flavor is full, body is medium-plus and strength is medium. Construction woes continue, with my lighter getting a workout as a result. The problems with the Kristoff Shade are pretty clear. First, I’m not sure the name change makes the most sense. I understand that not every shade, even Connecticut-seed, will be a shade of mustard; but I think consumers expect a certain color and this isn’t that. Secondly, the flat cap—intentionally or not—would be a lot better as just a regular round cigar. Similarly, I could do without the covered foot. Once all that’s out of the way: if you’d like to get your palate rocked without a huge nicotine hit, I think the Kristoff Shade is an economical enough choice; I’m just not sure that’s the intent.