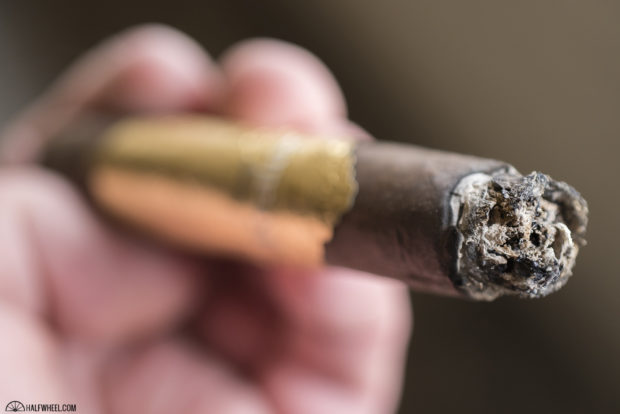 As far as announcements go, Jas Sum Kral seems to be on a tear in recent months: not only did the company announce it would be shipping a new line of CBD infused premium cigars in April, but it also added German distribution of its products and a new brand to its portfolio named Tyrannical Buc.

However, the news seemed to start back in November 2018, when Jas Sum Kral officially released its newest creation named Kralot, which translates to King from Macedonian. Although it was released as a single 7 x 50 vitola during an event at Minnetonka, Minn.-based retailer Cigar Jones, Riste Ristevski, the brand’s owner, is on record as saying there are plans for Kralot to become a full-fledged, multi-size line with three other vitolas planned for this year: 4 x 52, 6 x 44 and 7 x 38.

Blend-wise, the Kralot incorporates a Mexican San Andrés wrapper, Nicaragua Somoto and Ometepe binders and fillers from Condega, Estelí and Jalapa. Packaged in boxes of 20, the regular production cigar is priced at $14 each and is produced at the Tabacalera de Aragon S.A. factory in Nicaragua. A very attractive espresso brown wrapper covers the Kralot, and while it is rough to the touch, there is virtually no oil whatsoever. The cigar is extremely spongy when squeezed—almost to the point where I think it might cause issues—and I can see very small flecks of gold embedded in the wrapper after a visual inspection. Aroma from the wrapper is a combination of earth, manure, leather, coffee beans, cloves and rasins, while the cold draw brings flavors of strong oak, leather, raisins, bread, anise and slight spice.

From the first puff of the Kralot, I am immediately inundated with a strong, dominant flavor of sweet raisins on both the finish and the retrohale, followed by notes of creamy oak, earth cocoa nibs, cinnamon, baker’s spices, espresso beans and yeast, along with a noticeable amount of black pepper on the retrohale. There is also a fairly large amount of spice on my tongue, strong enough that I am convinced it will be sticking around for a while. Construction-wise, the draw is excellent after a clean straight cut, and while the burn is not exactly razor sharp from the start, it is not nearly bad enough to need help yet. The smoke production is about average while the overall strength closes out the first third well short of the medium mark, although it does seem to be increasing. The rich raisin sweetness continues to dominate both the finish and the retrohale during the second third of the Kralot, while the rest of the profile seems to also be close to carbon copy of first third as well, including flavors of creamy oak, cinnamon, bitter chocolate, baker’s spices, floral and freshly roasted coffee beans. The black pepper note on the retrohale is still present as is the spice on my tongue, and while both have not seemed to increase in strength, they have also not seemed to begin to fade either. The draw continues to impress with just the right amount of resistance, but the burn finally becomes problematic enough that I am forced to touch it up once. Strength-wise, the Kralot has increased noticeably compared to the first third of the cigar, but not quite enough to hit the medium mark by the of the second third. Unfortunately, the final third of the Jas Sum Kral sees some significant changes, not all of which are for the best: while the raisin sweetness is still very noticeable, it is not as distinct on the palate, and both the spice and black pepper have faded into obscurity, leaving behind a profile that is less complex. Other notes of dark chocolate, bitter espresso beans, earth, creamy oak, hay and a touch of creamy peanuts continue to flit in and out, but none of them come close to being strong enough to take over the top spot. Thankfully, the burn has gotten back on track after its issues in the second third, while the draw is as good as ever. Finally, the strength level does finally hit the medium mark by the end of the final third, and I put the nub down with a little less than an inch to go. An absolutely crazy amount of raisin sweetness is the star of the show when it comes to the Kralot, with all other flavors—other than a creamy oak note that was quite strong on the palate—playing second fiddle. Having said that, the profile seems to fall apart a bit in the final third by losing the spice and black pepper on the finish and on the retrhoale respectively that added some extra complexity, neither of which would return. In the end, the wonderful first two thirds of the Kralot make it a no brainer to recommend trying out, but don’t feel bad if you find yourself wanting to put it down a bit earlier than you normally would.