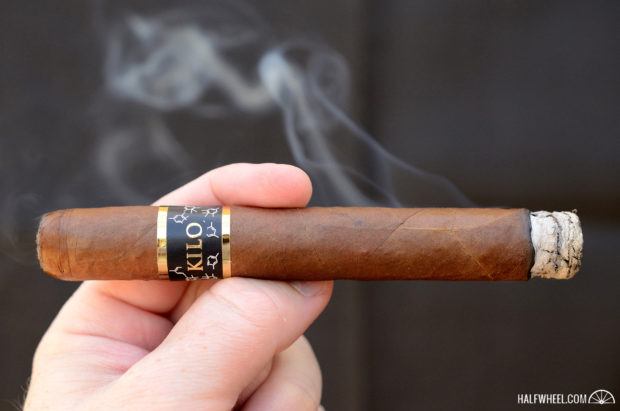 Almost two years ago Barry Stein’s KILO project officially launched. It was long in the making, with Stein starting on it in 2013, having two unofficial releases, and then releasing the final blend at the 2015 IPCPR Convention and Trade Show. When I got to review it in October of 2015, I enjoyed it enough that I purchased a few here and there, revisiting them every once in awhile. With one left in my humidor from the original review, I decided it was time for a redux and time to pick up some more just for myself.

Unfortunately, when I went looking I didn’t find any for sale anywhere. When I reached out to Stein to see if this was a temporary stocking issue or if it wasn’t being made anymore, he replied and let me know that the KILO had been discontinued and the trademark for it sold. He wasn’t able to comment further on the matter, but it appears this might be the last KILO I’ll get to smoke.

I never had the chance to try the original blend of the KILO, but what I did get to experience out of Rojas’ factory leads me to believe this was a great move for Stein’s brand. The KILO was a flavor bomb right out of the gate, with shifts in the flavors that kept it interesting all while meshing together wonderfully. The construction was consistent, with the burn staying mostly even and not requiring any intervention on my part. Reasonably priced and sporting an enjoyable profile, I can easily suggest seeking these out and trying them for yourself. I look forward to trying the robusto size as well, but if it’s anything like the toro, I know I’ll be looking for more of each.

Previously I remember being highly impressed with the wrapper’s consistency in color and texture and it doesn’t disappoint a year and a half later with the wrapper looking as consistent and impressive as I remember. Squeezing the cigar there’s still a nice universal give to it, without any soft spots. With the aroma coming off the wrapper mostly barnyard notes, the earth, vanilla and damp hay do eventually struggle through, joining the party. The same plethora of flavors assault my tongue on the cold draw, creating that distinct root beer taste I remember, however the grass on the finish is missing, instead replaced with a slightly fruity aroma.

As I light up and start into the first third, the KILO Toro’s salt and pepper earth note again overwhelms me briefly, before settling down slightly with more notes of spice, cocoa and some dried fruits. While the smoke hitting my palate is enjoyable, the profile really shines on the nose, highlighting the spice, cocoa and sweetness. Thankfully the strong salt and pepper earth note fades quickly, allowing the spice, cocoa, fruits and creamy sweetness to really start shining. Noticeably missing is any sort of fresh grass note that was so pervasive throughout the cold draw and first third originally. The second third sees a continuation of the pleasant profile, with spice and cocoa up front, followed closely by the fruits, creamy sweetness and a new hint of vanilla. There is still a very light hint of black pepper in the background, however the saltiness and earth notes from the first third have completely disappeared. Shifting into the final third I don’t notice much, if any, change to the profile. Spice, cocoa, fruit, a creaminess and hints of vanilla and pepper make up an interesting and engaging profile all the way to the end, staying smooth and enjoyable the whole way. Starting out the KILO’s burn is mostly even, looking only the slightest bit wavy. A draw that’s right in the middle of ideal produces plenty of the aromatic smoke that encircles my head with it’s enticing notes. About an inch in the burn line gets a bit more wavy and jagged, but nothing completely uneven or requiring a touch up. The second third does start to see one side run away, so a minor touch up is needed to keep things going. The ash isn’t necessarily dense, flaking off some small pieces, but for the most part stays together until around one inch, at which point I roll it off into the ashtray. The final third cooperates more than the first two, although one part does need another small touch up. After that the rest of the cigar is smooth sailing, with the burn staying even until the cigar was burning my fingers.

The KILO Toro is something I’ve bought more of after the initial review, which isn’t something that happens too often. As I stated above, it’s good on the palate, but the nose of the cigar is absolutely fantastic. A little over a year’s rest has changed the profile a bit, mostly with the disappearance of the fresh grass that was on the palate from the cold draw on. While I enjoy that as a profile note, the additions of vanilla and stronger fruity note are a better trade off for me. Unfortunately though, unless you already have these, run across a store with these still in stock, or happen to know somebody with some, it looks like for the foreseeable future you won’t be able to get any for yourself. I’m disappointed I won’t be able to get anymore to stock my humidor with, but I am happy that the last sample I had of the KILO smoked well.