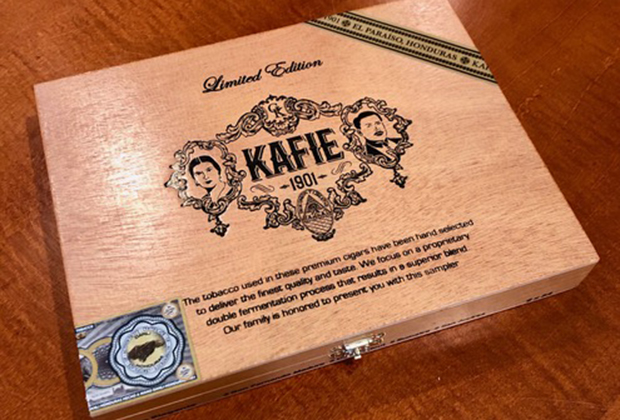 Fans of Kafie 1901 Cigars will begin to see some updated packaging in the coming weeks as the company has made some updates to both its core lines and its newer releases.

For the core lines, the company is adding an additional seal to the upper right hand corner of its boxes that references the factory’s location in Honduras. “We want people to know our cigar factory is located in Honduras,” Dr. Gaby Kafie told halfwheel, adding that he didn’t want to make a drastic update to the packaging, as he felt it would deviate from the company’s identity that customers have come to know. That new seal will be the only change to the company’s four core lines, the Don Fernando Maduro Collection, the Kafie 1901 Connecticut, the Kafie 1901 Sumatra and the Kafie 1901 San Andres. As part of the company’s five year anniversary, a new logo was created that will appear on all other releases, including the recently announced Kafie 1901 Cigarillos, which are slated to begin arriving at retail this fall. The new logo was created as a nod to Kafie’s family history, notably his grandfather, Don Chukri Kafie, and grandmother, Doña Regina Karra de Kafie. “My grandmother was born in 1901 in a small fishing village named La Union, El Salvador,” Kafie said. “It was this same year that my grandfather, a Palestinian Christian who fled the Holy Land to pursue his American dream, arrived to this port.” He feels that because of his grandfather’s exodus from his home land, he blessed every generation thereafter with the freedom to pursue their dreams, and why they are being honored on this new branding.

The lines released with the new packaging will also bear the same seal in the upper right hand corner that is being added to the core lines.