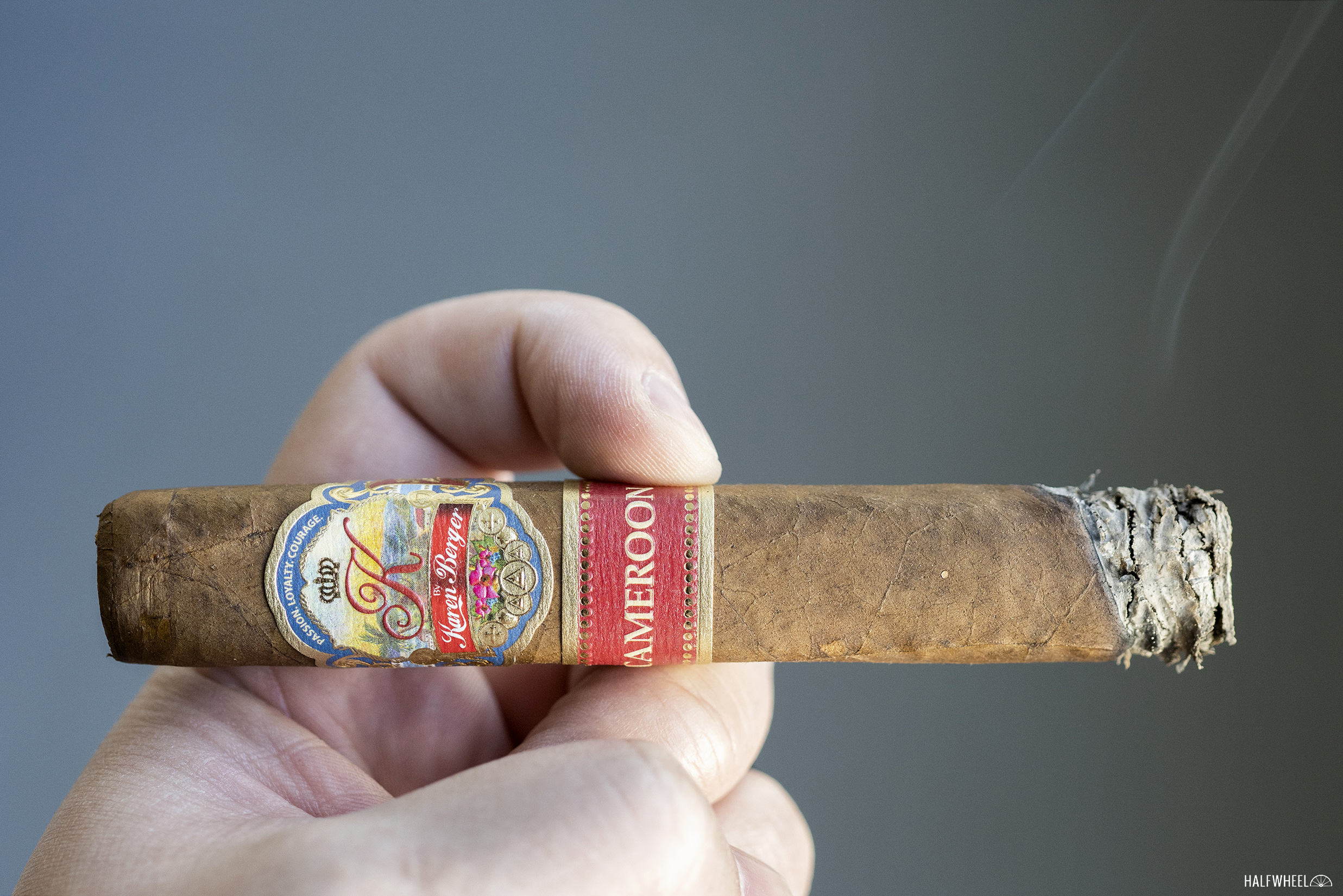 Welcome to the latest installment of what happens when Cameroon wrapper goes to a Nicaraguan cigar factory.

I’m always hesitant to call much of anything a trend in the cigar industry, and particularly hesitant of engaging in the cigar blogger pastime of declaring a particular year the Year of ___. Even this phenomenon—Nicaraguan-based cigar companies working with Cameroon wrapper—isn’t something that is unique to 2021, though it certainly has increased in frequency in the last two years. As I mentioned in a recent review of RoMa Craft Tobac’s Baka—another Nicaraguan cigar with a Cameroon wrapper—I think that much of the reason why this seems new is because of how few new cigars with a Cameroon wrapper come out in a given year, even from the companies that have worked with Cameroon for decades.

At least as of now, there seems to be one other difference between the K by Karen Berger Cameroon and its siblings besides the wrapper. While the other three options are regular production, the Cameroon-wrapped line is limited to 1,000 boxes of each of the three sizes in which it is offered:

For those unfamiliar with Karen Berger, she’s the widow of one the most important people in the history of Nicaraguan cigars. Enrique “Kiki” Berger was the owner of both Cuban Crafters, a popular cigar store in Miami, as well as Tabacalera Estelí, which he opened in the mid-1990s during the cigar boom. He was one of the first Americans to come to Estelí and start a cigar factory. While his cigar brands gained varying degrees of notoriety, his more lasting impact was the assistance and guidance he offered others hoping to start their own factories in Nicaragua, including companies like Drew Estate.

During his time in Nicaragua, he met a woman named Karen, whom he would marry. Before his passing in 2014, Karen donated one of her kidneys to Berger as his had failed.

In 2016, Karen debuted a revamped Don Kiki brand, including the K by Karen Berger Habano and Maduro. Since then, the brand has grown to include more lines, the latest of which is being reviewed today. 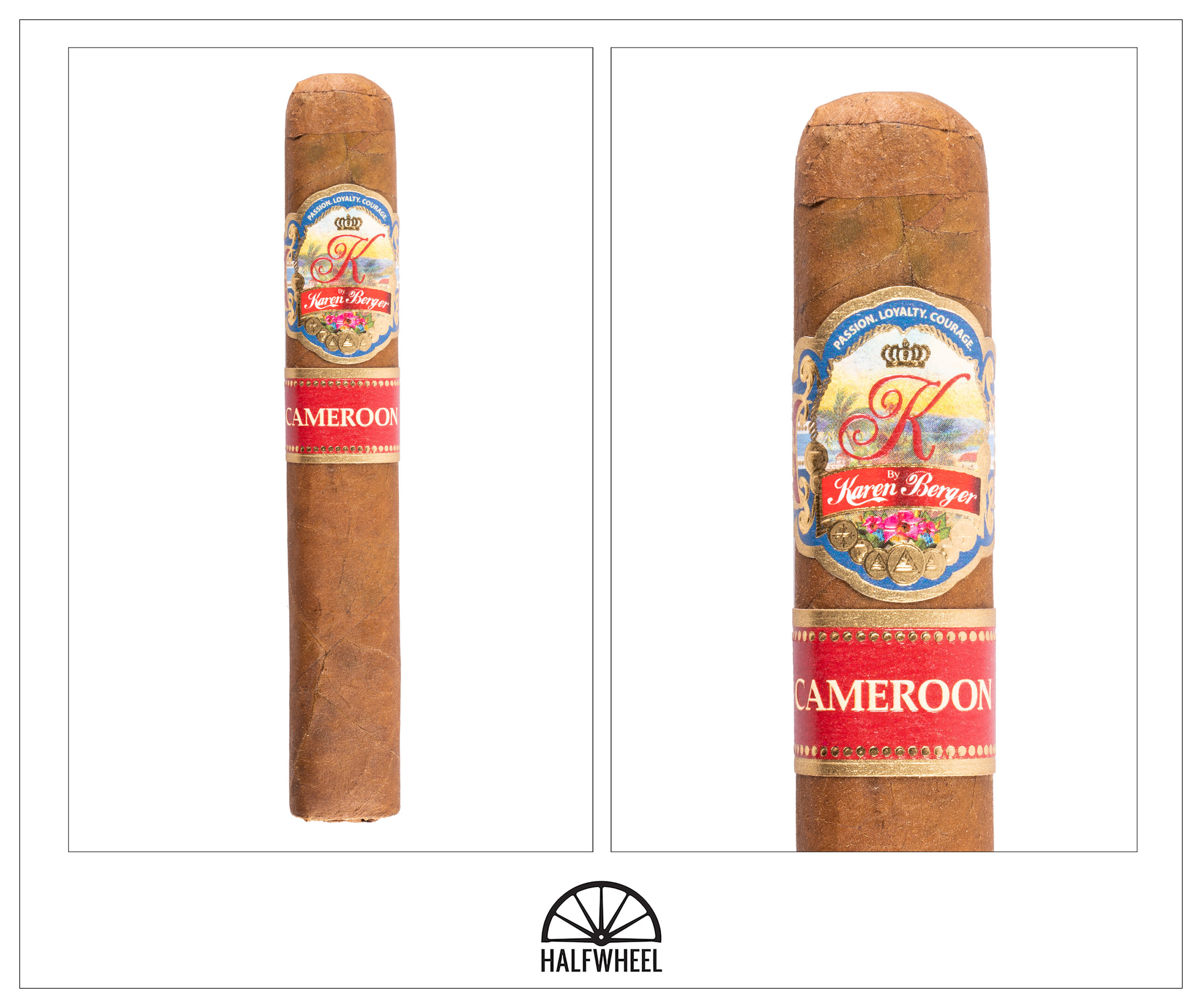 Appearance-wise, this is what I expect from a Cameroon wrapper with one notable exception: this cigar is box-pressed. It’s certainly not the first time this has happened—one of the first Cameroon cigars that really turned me onto the wrapper, the Cameroon L’Anniversaire, has both the African wrapper and the box-press—but it’s pretty uncommon, for reasons I’ll explain below. In addition to the appearance, these leaves have an incredibly supple feel that I sometimes find with other Cameroon wrappers. As for the aroma, it’s medium-full and I pick up scents of barnyard, acidity, gingerbread and taco meat. The foot is both sweeter and more intense thanks to aromas of chocolate syrup, key limes and something that is similar to baking a cinnamon bun. The cold draw has more of the chocolate syrup along with oranges and bread, and then an unpleasant acidity that reminds me a bit of what I imagine a spoiled shallot would taste like, a bit less intense than an onion.

The K by Karen Berger Cameroon starts completely differently than the cold draw. There’s toastiness, bread, nuts and flavors of bad coffee. While I think the flavors work fine together, this isn’t the normal sensations of bread or nuttiness that I get, everything is a bit weird. As the cigar progresses, the flavors return to more familiar versions of things I taste before. There’s earthiness, creaminess, white pepper, burnt bread, and a honey-like sweetness. Outside of the earthiness, the other flavors are pretty subtle. The overall sensation is still medium-plus, but the individual flavors seem a bit delicate. The finish is quite similar to the main flavor, though it’s as if I’ve also spritzed some liquid smoke in my mouth, or at least a very tiny amount the potent toasty concoction. Retrohales have citrus and pineapple—the latter of which brings some acidity—along with saltiness. The salt really helps to add another dimension to the flavors. On two of the cigars, I can’t really tell the difference between when the smoke is in my nostrils and when it’s left, at least not in the nose. My throat feels toastier, but beyond that, it’s pretty limited. One sample has more toastiness in the nose, though I’m not sure it changes the profile all that much. Because of the retrohales flavor is closer to medium-full than medium-plus, body is medium-full and strength is medium. The cigar seems like it needs a touch-up every 15 minutes or so to help with declining smoke production, an experience I find on each of the three cigars smoked for this review.

I’m not sure there was that much pepper before, but whatever was there is completely gone in the second third. Whether it’s the lack of pepper or something else, I’m now able to taste even more subtle flavors like cake batter, Kosher salt and meatiness. After the midway point, there’s also an added bourbon whiskey flavor that brings woodiness, toastiness, a bit of sweetness and some burning sensations. I don’t mind the combination, though it’s a bit all over the place. Unlike the first third, I’m able to tell the main flavor and the finish apart as the latter has acorns, some creaminess, meatiness and a bit more sourness. The star of the show in the second third is the retrohale. There’s a melon-like fruitiness that provides a sweet accent to a hearty woody flavor. I oddly can’t get any pepper when retrohaling, but the vibrant flavors that are there more than make up for it. The finish sees the melon sweetness intensify, which brings a creamy-like cooling sensation to my palate, though there’s also a bright mustard powder flavor joining the woodiness. Flavor is medium-full, body is medium-full and strength is medium. Like in the first third, each cigar just seems to need help with smoke production every 15 minutes or so. The other measurements of construction are fine, but without further assistance from a lighter, it seems the cigar would either go out or get way too harsh for my liking. There’s a pretty noticeable shift with about an inch and a half left. Creaminess, grains and fresh coffee beans join the profile. Two cigars have this flavor that reminds me of stale bottled water, something I find with decent regularity in cigars. The finish has more of the melon sweetness from the second third, now joining coffee grounds and a slightly more vibrant earthy flavor. Retrohales don’t have the melon sweetness, though the heartier profile makes up for it. There’s grains, earthiness, acorns and meatiness. Unfortunately, unlike the second third, I’m not able to retrohale on consecutive puffs as it gets more intense than I’d like it too. The finish has Cognac, a Wonderbread-like breadiness and a bitter creaminess. Flavor picks up to full, body is medium-full and strength is medium-plus. As has been the case throughout the cigar, the K by Karen Berger Cameroon Robusto seems to want to go out every 15 minutes or so, so I find myself touching the cigar up to prevent it from doing so. 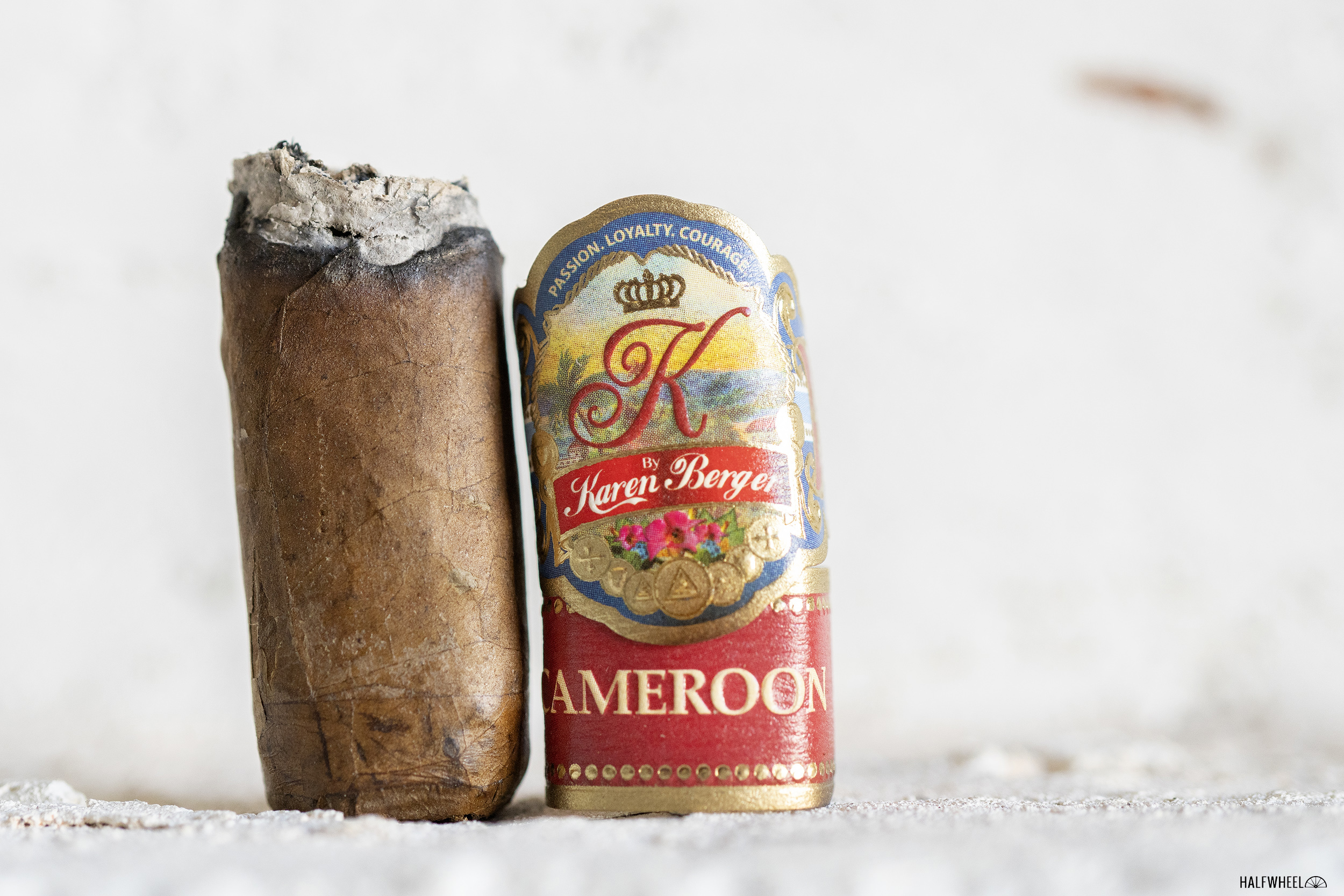 After a bit of a slow start, the K by Karen Berger Cameroon emerges as a solid Cameroon-wrapped cigar with one notable issue: the burn. It’s not wonky, but there were too many times—more or less from start to finish—where the smoke production got to almost nil and I found myself touching up the burn line to prevent the cigar from going out. Without that issue, it’s still not an upper-echelon Cameroon cigar but it is quite good. My experience with the rest of the Karen Berger portfolio is non-existent, so I’m not sure how this falls within the larger portfolio, but I’d gladly smoke another one, so long as I had my lighter handy and full.