Close followers of Habanos S.A.’s Edición Regional program might point to 2011 as the peak of the program, and it was in terms of sheer quantity, as there were 25 ERs put out in 2011, the most since the program formally began in 2005. It was the last year of multiple releases for the same region and saw four different marcas have at least three different releases, including Juan López.

As has been mentioned before on halfwheel, Edición Regional releases merge the non-global brands with existing vitolas in the Habanos SA portfolio but that don’t appear in the particular marca being used for an ER release. In this case, Havana House, the Canadian distributor for Habanos SA, picked the Juan López brand and a 5 3/10 x 52 robusto vitola that had become very popular in recent years: a vitola known as the Edmundo.

That name should be immediately familiar to smokers of Cuban cigars, as it is most commonly associated with the Montecristo marca. The size debuted in 2004 and became almost as popular as the iconic No.2, gaining several packaging formats including both tubed and non-tubed versions, three-packs and 25-count semi boîte nature boxes. The Edmundo vitola was also featured in a 2006 Montecristo Travel Humidor that was part of the Duty Free and Travel Retail Series, the 2009 X Edición Festival del Habano sampler which was given to attendees of the annual event in Havana, as well as a special release in 2010 of a ceramic jar with 25 cigars created for western Europe.

The Edmundo shape has not only become a popular one in its native Montecristo marca, but also in the Edición Regional program, having been used for eight different releases, three of which were part of 2011’s releases:

Beyond that, it was also used as the size for the H. Upmann Royal Robusto released in 2011 as an exclusive for La Casa del Habano stores. It is an incredibly familiar and accessible size for both frequent cigar smokers and those who only smoke occasionally, neither too big or too small and in a common parejo vitola. For a cigar named Supreme, the Juan López Supreme certainly doesn’t look that much different from other cigars; it’s a well-rolled cigar in a familiar vitola that offers a dark tan shade with a few veins and generally smooth feel in the fingers, but there is nothing about it that inherently screams out that this is a cigar worthy of such an adjective. For the most part the cigars feel all uniformly firm, with one cigar showing a particular hard spot near the head, and they all let you know very quickly that the wrapper is on the thin and delicate side. I get a decided note of espresso off the foot of the first cigar, with subtle suggestions of wood and hay on all three as well as a bit of a sweet floral characteristic, while the cold draw—which is a bit tight—offers a sweeter overall experience, delivering a faint touch of honey up front with just a bit of pepper in the very back of the offering and touches of that same floral sweetness.

The Juan López Supreme gets off to a palate-friendly start with a medium-strength offering of toast, leather and just a bit of pepper, while the first retrohale makes even more of a favorable impression due to how manageable it is, having just the right amount of pepper and a focus more towards touches of terroir and wood than outright strength. There is also a very enjoyable aroma or warm nuts that wafts off the cigar while it’s at rest, but one that also has a decided smokiness for a bit more depth and character. The burn for the most part is good in the early goings, not perfectly even but acceptable, with the ash holding on for well over an inch. The cigar continues to open up and develop approaching the second third, showing just a touch more black pepper that adds a bit of char to the profile, while subtle hints of cream are also beginning to emerge. One of the most pronounced changes I get from the Juan López Supreme is after the first clump of ash drops off and the cream I thought I was picking up earlier on is now a much more prevalent part of the cigar, though not so much as to overshadow the other flavors that have been progressing from the start. The pepper also begins to linger on the palate a bit longer without getting stronger, though retrohales are just a bit brighter than they were earlier. It’s a natural and very enjoyable progression of flavor without being too much of a jarring change, and the fact that it is noticeable in both the flavor and aroma of the cigar makes it that much more impactful. The cigar just keeps getting more and more appealing with each puff, picking up a bit of warm, freshly baked pretzel in both the flavor and aroma around the midpoint, while the burn line remains about as sharp and even as I can hope for and puts off plenty of smoke with a strong ash. 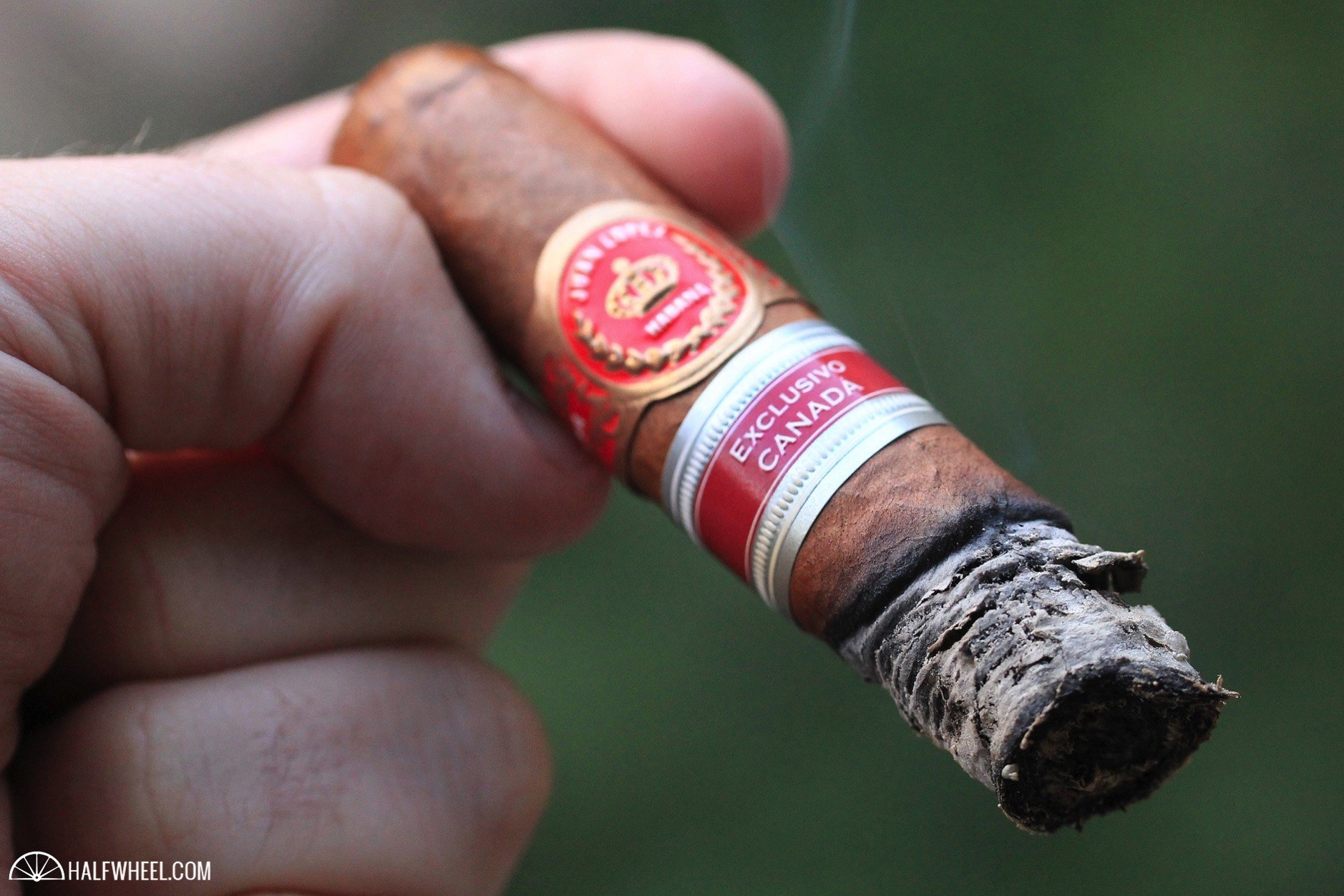 It’s a slow approach into the final third, both due to my desire to savor every puff of this cigar as well as a burn rate that is in about as much of a hurry as someone relaxing on a Cuban beach with a great cigar and a full glass of rum. Those few puffs of creaminess are not long gone, and the cigar hasn’t shown much of the sweetness I was expecting given its prelight notes, but neither of those are detriments to a well-balanced flavor and aroma that is plenty engaging on the palate and offers just enough pepper to be attention grabbing. The Juan López begins to show a bit more robust side as the burn line approaches the point where the bands need to come off, as the wood and dry earth and leather sharpen up a bit and a touch of salt enters the equation, while the first signs of heat affecting the flavor become noticeable. Only at the very end with less than an inch and a half to go does the cigar get hot and a bit much to deal with; slowing the puffing rate helps a bit to remedy that, something I desperately want to do to get every last puff out of this incredibly delicious cigar. I really wish I could take the second cigar out of the equation, both because the Juan López Supreme would get a much better score and I would have a much better overall impression of it. It's a reminder how much the draw can affect the impression of a cigar, and it was clear that while the tobacco wanted to put out some great flavors, the roller's work got in the way. There was hardly a moment in the first and third samples that I didn't love, and it was only the heat in the final inch and a half that began to put any kind of negative note on this cigar. It's a great reminder of how good the Juan López blend can be and this size is an excellent one to show off the marca's key notes. Definitely one for the win column on the Edición Regional scorecard.