For Great Britain’s most recent Edición Regional release, the distributor Hunters & Frankau turned to a cigar released in 2009 for its inspiration, the Juan López Selección Suprema, and while it may not be completely appropriate to call this a follow-up, it’s certainly not challenging to see the similarities.

That cigar, which was released with a secondary band denoting it as an exclusive for Reino Unido, or the United Kingdom, was a 6 7/10 x 52 double robusto. The Selección Superba is a bit shorter and fatter than its predecessor, measuring 5 7/8 x 54, and comes bearing a secondary band indicating it is Exclusivo Gran Bretaña, or exclusive to Great Britain. The two cigars share the same design on the primary band, and while it looks similar to those found on the regular production sizes, it’s the inclusion of the size’s name that makes it unique, as well as some extra embossing, both of which date back to before the Cuban revolution.

According to London retailer C.Gars Ltd., the Juan López Selección Superba was produced at an unnamed factory in San Antonio de los Baños, which lies within Havana province. A total of 6,000 boxes of 10 were produced. While the Juan López marca has been used for numerous Edición Regional releases and seems to pop up with clockwork regularity, it’s still a fairly small brand. It’s classified as a local brand and only has three sizes in regular production, the Petit Corona (5 1/12 x 42), the Selección No.1 (5 5/8 x 46) and the Selección No.2 (4 7/8 x 50). That leaves a wide selection of sizes for distributors to pick from when requesting an Edición Regional release, as the program is designed to merge the non-global brands with existing vitolas in the Habanos S.A. portfolio that don’t appear in the particular marca being used for an ER release. 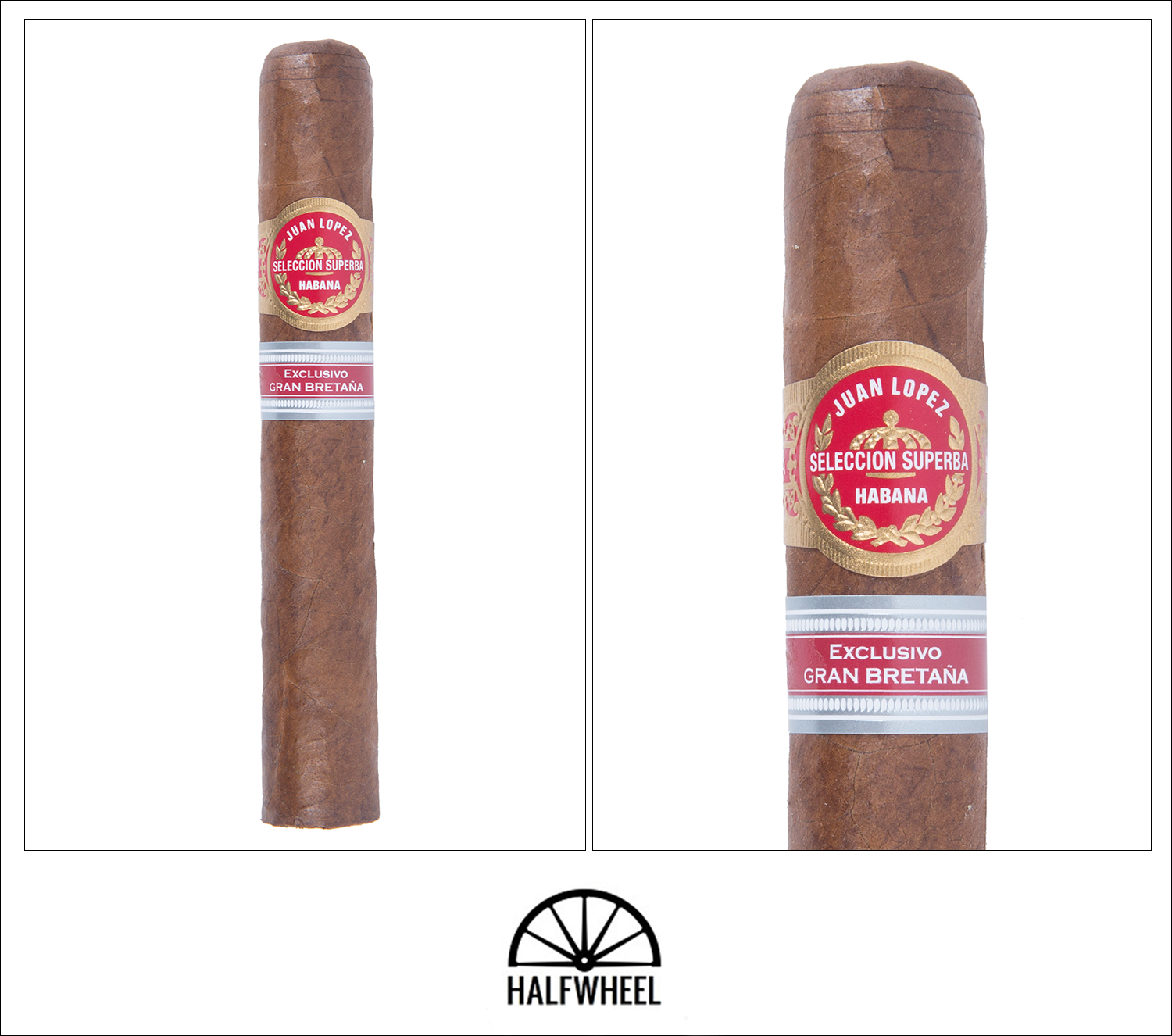 As soon as I look at the Juan López Selección Superba, I can’t help but think of all the comments that I have read about Habanos S.A. embracing larger ring gauges. It’s just a touch shorter and a tick thicker than the standard 6 x 52 that seems to be the most common cigar size in the U.S., or at least what has become the de facto size of single vitola releases. The wrapper is particularly attractive, with a bit of oily sheen and a slight hint of red, making the capa almost dark auburn in appearance. It also has a certain hue that makes me think of lighter-colored jerky with a bit of glaze. It’s a slightly firm, well-rolled and perfectly capped cylinder of tobacco, with flat seams and an intricate network of small veins. The foot conveys notes of both sweetness and pepper, the former cool and complex with hints of molasses, butterscotch and teriyaki glaze; the latter a bit coy and shy but certainly not overly timid. The cold draw is incredibly complex, slightly smoky and with notes of tree bark, woods and very subtle damp earth from which a subtle sweetness emanates. There’s also a side of this flavor that makes me think that I’ve tasted this before in a dish, though I can’t quite place it.

While the first puffs feel a bit muted, there is still plenty going on between the pepper in the nose and on the tongue, which gets complemented by a robust earth note that is slightly rough on the palate but far from off-putting, with a good amount of black pepper and a finish that hints at oak and mint. It’s fairy obvious within the first puffs that this a young cigar that could have benefitted from more time to rest, but at the same time it offers a good peak into  how the Juan López Selección Superba might develop over time. The pepper begins turning harsh on the senses before the burn line records its first inch, hitting notes of both red chili and jalapeño depending on the sample, both aggressive and making the cigar become a bit more off-putting. Thankfully it settles down fairly quickly, and the cigar moves on to show its more restrained pepper-driven profile, with slight hints at toffee and butterscotch, and even a bit of caramel latte. Some combustion issues close out the first sample, as the cigar begins to feel a bit damp. 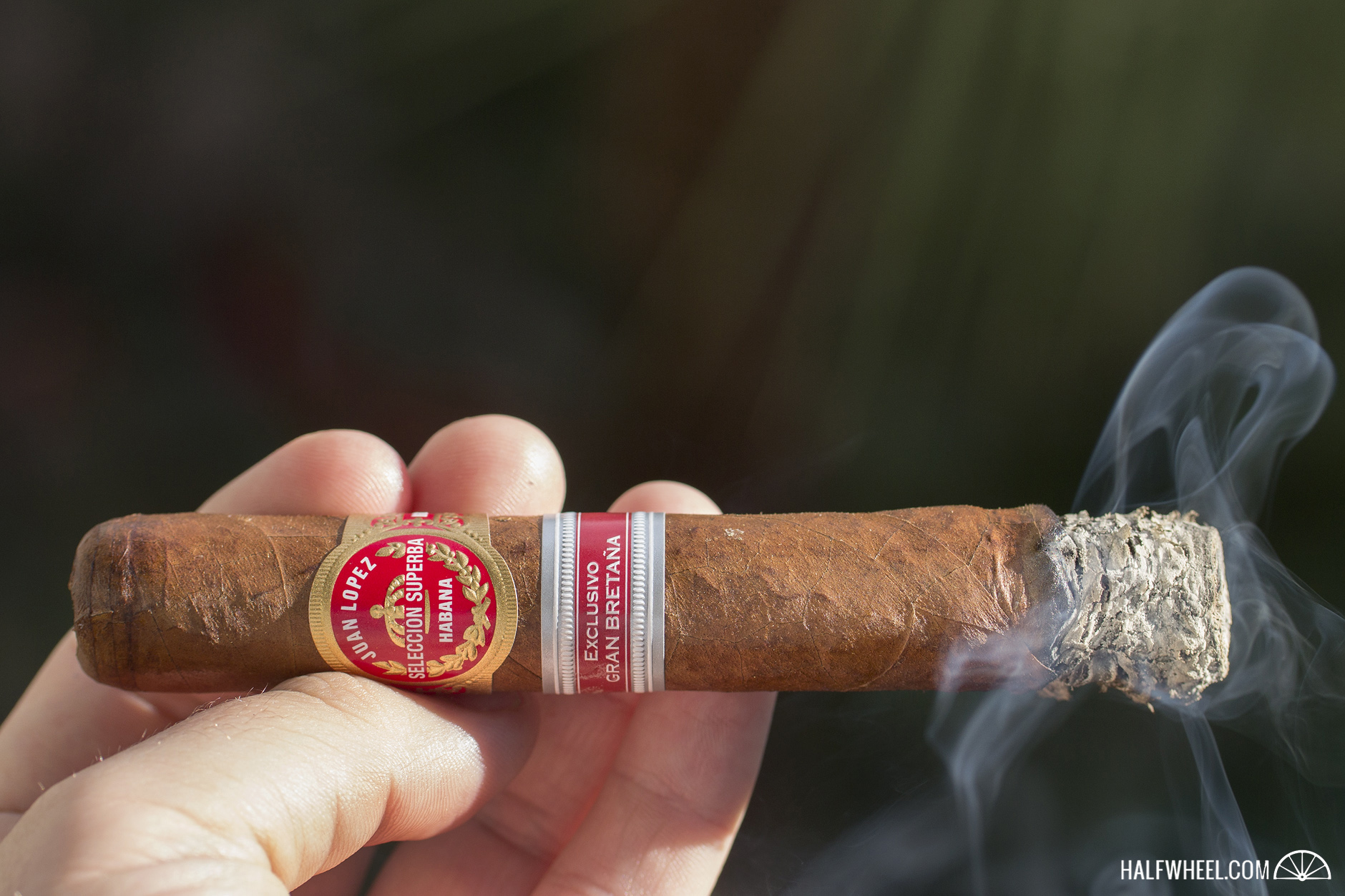 The Juan López Selección Superba revisits the harshness it showed in the first third, as the pepper shines through but with a good bit of youthful harshness. Again, it fades away, and the cigar’s smoke becomes much more pepper-laden and rich with grill smoke, now going after not only the nose and mouth but the eyes as well, though in the samples that were dryboxed, I pick up some toasted marshmallow sweetness that wasn’t noticeable in the first sample. Near the midpoint, my attention is caught by how the pepper has taken on a new profile, particularly through the nose: it’s crisper and lighter than before, and soon after picks up a dry and woody profile that treats both nose and mouth while some creaminess has entered the mix as well. It’s here that the dryboxing seems to pay an immediately recognizable benefit in flavor as well as combustion. While burn issues continued to hamper the first Juan López I smoked as I had to relight the first sample twice in this portion, the second and third samples are performing much better. Yet even with the heavy dampness seemingly removed, the cigar still answers seemingly every enjoyable puff shortly thereafter with harshness, a back and forth that is getting fatiguing to the senses. Suggestions of chocolate and cocoa powder start getting made as the burn line eyes the final third. The first sample continues to burn woefully, imparting flavors of damp wood, bark and soil on the palate and muting the pepper, though it still sneaks some punchiness through at times. The other samples, however, are much more vibrant, still upfront with pepper but better rounded out by dry woods but generally lacking what sweetness had been found earlier, though the chocolate continues to try and stand out amidst a harsh finish that grates on the back of the throat. Even after some dryboxing, the burn rate has slowed noticeably, and the draw seems to have tightened up as a result, though that may just be the damp tobacco talking. Between the increased energy I have to expend to get the cigar to burn and what seems to be some added strength from the cigar, I’m feeling it much more than I did prior, while the flavors continue to be damp and muted on my palate save for the pepper that is youthful and punchy enough to stand out. I finish with just over an inch left, which isn’t bad but leaves a bit more tobacco unburnt than I would have liked as the final third needs the most help expelling the excess moisture. When given the proper rest and care in the production process, the Juan López marca is capable of producing some very flavorful cigars, whether it be the regular production sizes or those released through the Edición Regional program. While I don’t question the construction of these, as they were some of the better rolled Cuban cigars I’ve smoked recently, this is a cigar that is almost begging not to be smoked and like a fussy child, asking to be put down for a nap. I have no doubt that properly stored, these cigars will evolve into the rich flavor bombs that they are intended to be; here’s hoping that your patience can withstand the delay.