Established in the 1870s, Juan López is a long standing marca in the Habanos S.A. lineup. When the Edición Regional program was launched in 2005, it only consisted of two marcas — Ramón Allones and Punch—with two vitolas for each. The following year saw the program expand to other marcas, and Juan López was one of them. Since then, the marca has seen 14 more Edición Regional releases with one more planned — not one every year, but some years up to three different regions received a version from Juan López. The Minutos wrapper is a lighter brown, with a bit of a reddish tint to it. While the wrapper is soft, it’s far from what I would call smooth, with many bumpy veins running across the entire cigar. There is a slight give when squeezed, though there are no soft spots that I can tell. There is only the lightest aroma from the wrapper, and after a little concentration I’m able to pull out the tiniest hint of hay and general tobacco. The cold draw has notes that are much more detectable, though it remains quite light as well, with hints of cinnamon, hay and a trace of leather.

Starting into the first third the profile is mild, though not nearly as mild as the cold draw. Light spice, hints of pepper, creamy leather and sweet dark fruit notes mix together to form an easy going profile that is fleeting on the palate. The retrohale is another story, with potent white pepper assaulting my sinuses, which is somewhat shocking considering how mild everything else has been up to this point. The draw is right in the middle of ideal, with a spectacularly sharp burn line. Dense ash holds surprisingly strong, despite the smaller ring gauge, easily to around the inch line. Moving into the second third of the Juan López, the pepper has grown to move out of the background and into the fray, joining the spice, creamy leather and sweet fruit. Despite the increase in pepper, the profile is still very smooth and mild, really forcing me to concentrate to pull out specific notes, despite the fact that they haven’t really changed. Burn continues to be impressively sharp, while the ash is still dense and creating an even, ringed design that is visually appealing. Just after the halfway mark a light grassy note appears in the background, meshing well with the spice, leather, fruit and pepper. 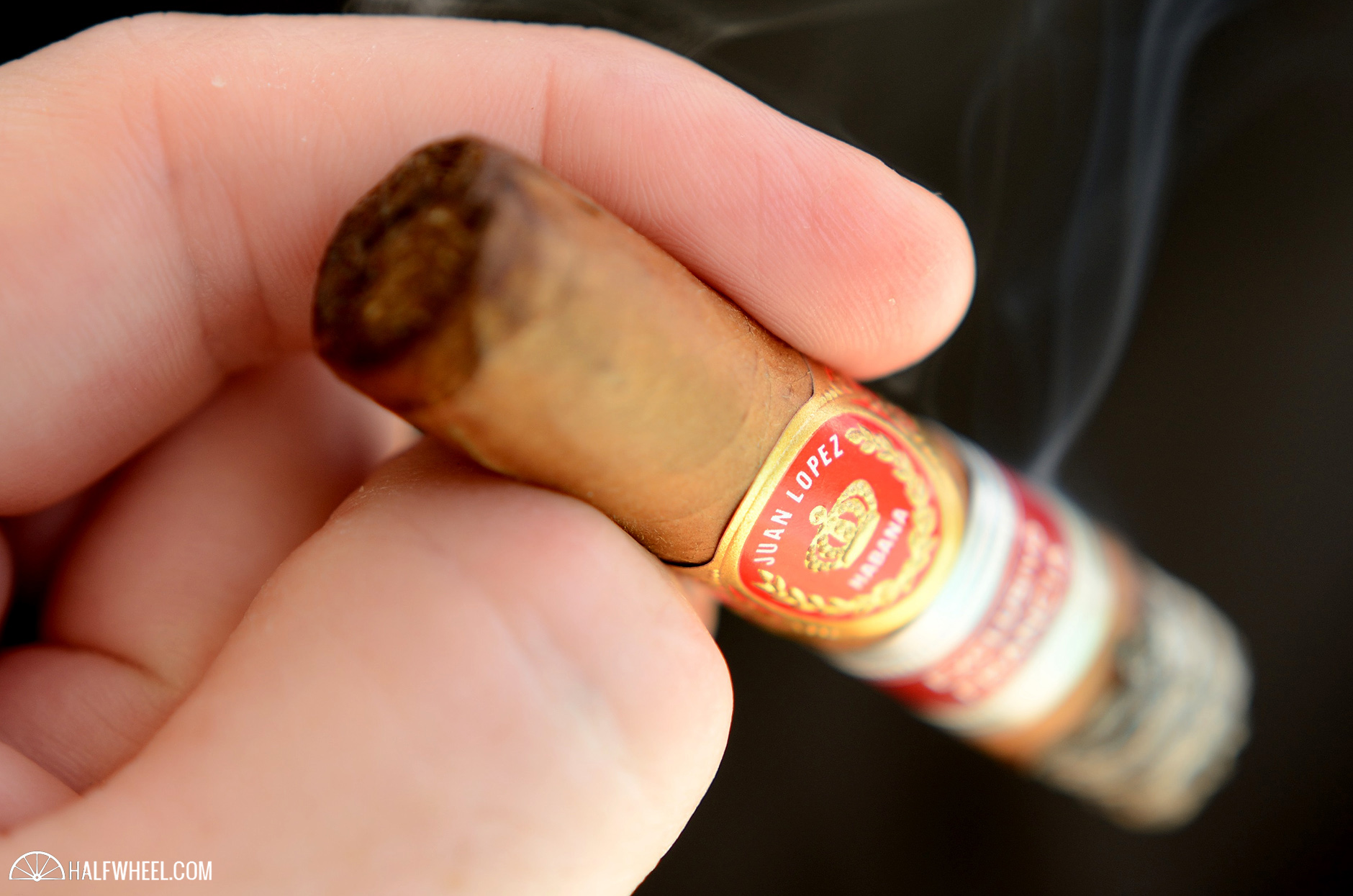 The final third doesn’t see much change, still continuing with the light spice up front, quickly followed by the pepper, leather, sweet fruits and light grassy notes. The burn line finally has its first hiccup, which isn’t really a hiccup more than just a slight waver that takes it from sharp and even to slightly uneven—not even something that requires a touch up. Taking the cigar all the way to finger—burning lengths, it finishes as smooth and mild as it started, without any harshness or unpleasant flavors cropping up. 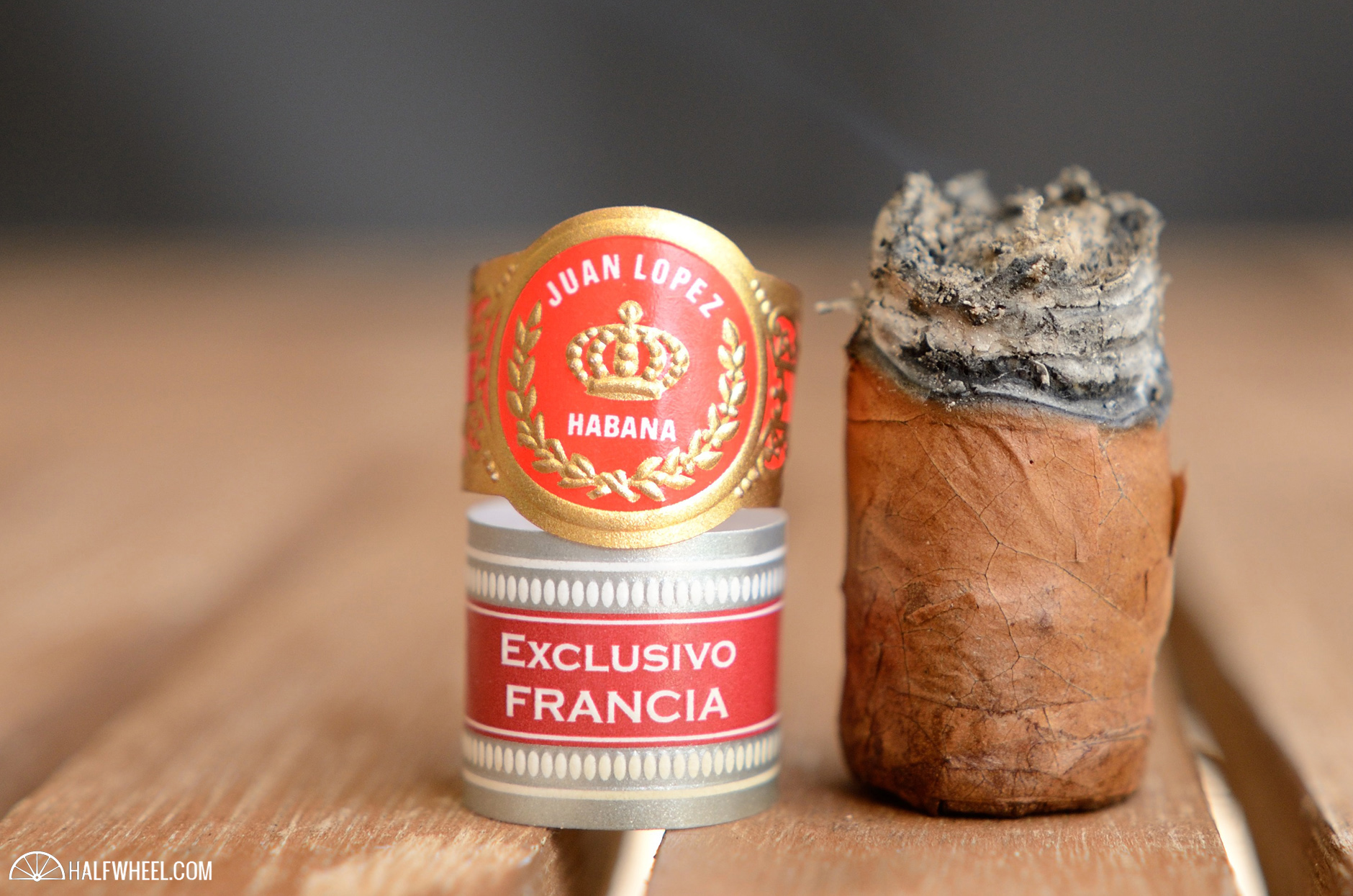 I’m not wildly familiar with the Juan López marca, having only tried it a small handful of times that I couldn’t tell you about in detail. So while I’m not overly familiar with what one might call a classic Juan López profile, I still wouldn’t expect this kind of mild, smooth profile from a cigar that is only around three-years-old. Having said that though, the profile of the Juan López Minutos wasn’t necessarily what I would call aged or refined—just mild to the point of difficulty picking out notes. There certainly was a little kick to the profile with the pepper note, particularly noticeable on the retrohale. Despite the mildness, the profile was quite enjoyable and the specific notes did work together well. To top it all off, the construction with each sample was spot on, with a great draw and sharp, even burn lines—a consistency that is always nice to see. So if you stumble across these, this is an easy suggestion to try, regardless of if you’re familiar with the Juan López marca or not.