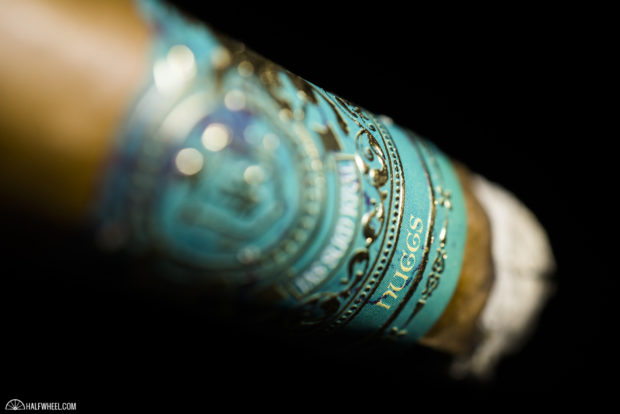 If you had told me one year ago that one of the most anticipated cigars of 2019 would be from Jas Sum Kral, there is zero chance I would have believed you. Unless you explained what that cigar was going to be.

It’s called Nuggs and while it doesn’t have the marijuana element that the name references, it does have cannabidiol (CBD), a cannabinoid found in both marijuana and hemp. While marijuana remains illegal on the federal level, last year Congress passed a bill that legalized the sale of hemp-derived CBD so long as the plant contains less than 3 percent tetrahydrocannabinol (THC), which is what is known to give marijuana its psychoactive effects.

Jas Sum Kral is not the first company to release a CBD-infused cigar, but this is the first example of a premium cigar with CBD sold in the U.S. The Jas Sum Kral Nuggs is offered currently with an Ecuadorian Habano wrapper, while a Mexican San Andrés planned for later. Each cigar is infused with 20mg of hemp-derived CBD that is designed for oral consumption.

Riste Ristevski, Jas Sum Kral’s owner, told halfwheel that the cigars are rolled at Tabacalera de Aragon S.A. alongside the rest of the company’s other cigars without CBD. They are then shipped to a lab in Colorado where the CBD is infused.

He added that the project took over a year to develop.

To my knowledge, Jas Sum Kral hasn’t made any claims about what the CBD in its cigars might do, but there is research that suggests that it could be useful in treating a variety of ailments ranging from pain to anxiety to insomnia and more. Pricing is set at $12 per cigar and it began shipping in March. 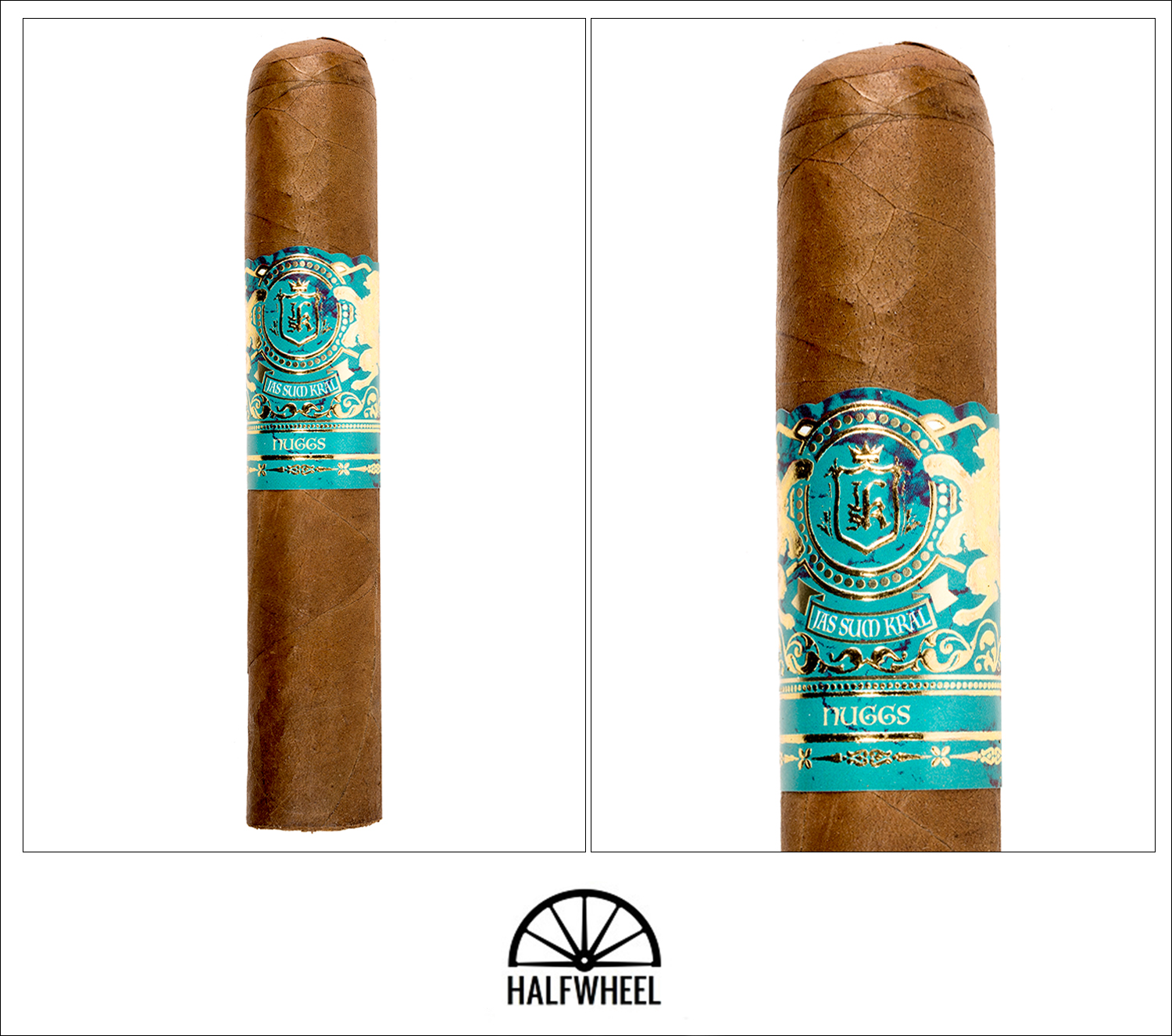 There is nothing particularly exciting about the wrapper, but it definitely doesn’t look to have the typical shade of  an Ecuadorian Connecticut leaf; more on that below. It’s uniform in color with a slightly above average amount of oils. The wrapper smells odd due to a bit of a soapy characteristic with some acidity, right around the medium-full level. For whatever it’s worth, the foot smells like a typical cigar with some nuttiness, oatmeal cookie and a floral flavor. It’s medium-full in intensity, but the flavor isn’t consistently there and so for various parts of sniffs there’s just not a ton of flavor coming back. Some nuttiness, a bit of a muted potato chip flavor and some of that aforementioned soapiness are present. Like the smell from the nose, the flavors on the cold draw are medium-plus in intensity, but not consistently there. What is present during each cold draw is the acidity from the wrapper, which is very noticeable.

If anyone is hoping for some sort of life-changing experience to happen on the first puff, you will be sorely disappointed. Instead, there’s a lot of coffee bean flavors, toastiness and a bit of bread. Within a few puffs, those flavors change pretty dramatically to a mixture of nuttiness and dry crackers over some earthiness and floral flavors. One sample has some dry paper underneath, which is less than ideal. Flavor is medium-full, body is medium-plus and strength is medium. Construction-wise, the draw is great on all three cigars, though the burn rate varies pretty dramatically. One sample takes all of about 15 minutes to go through the first third, about as quick as I’ve seen any cigar burn. The other two are normal, though one of those cigars needs a touch up less than an inch in. 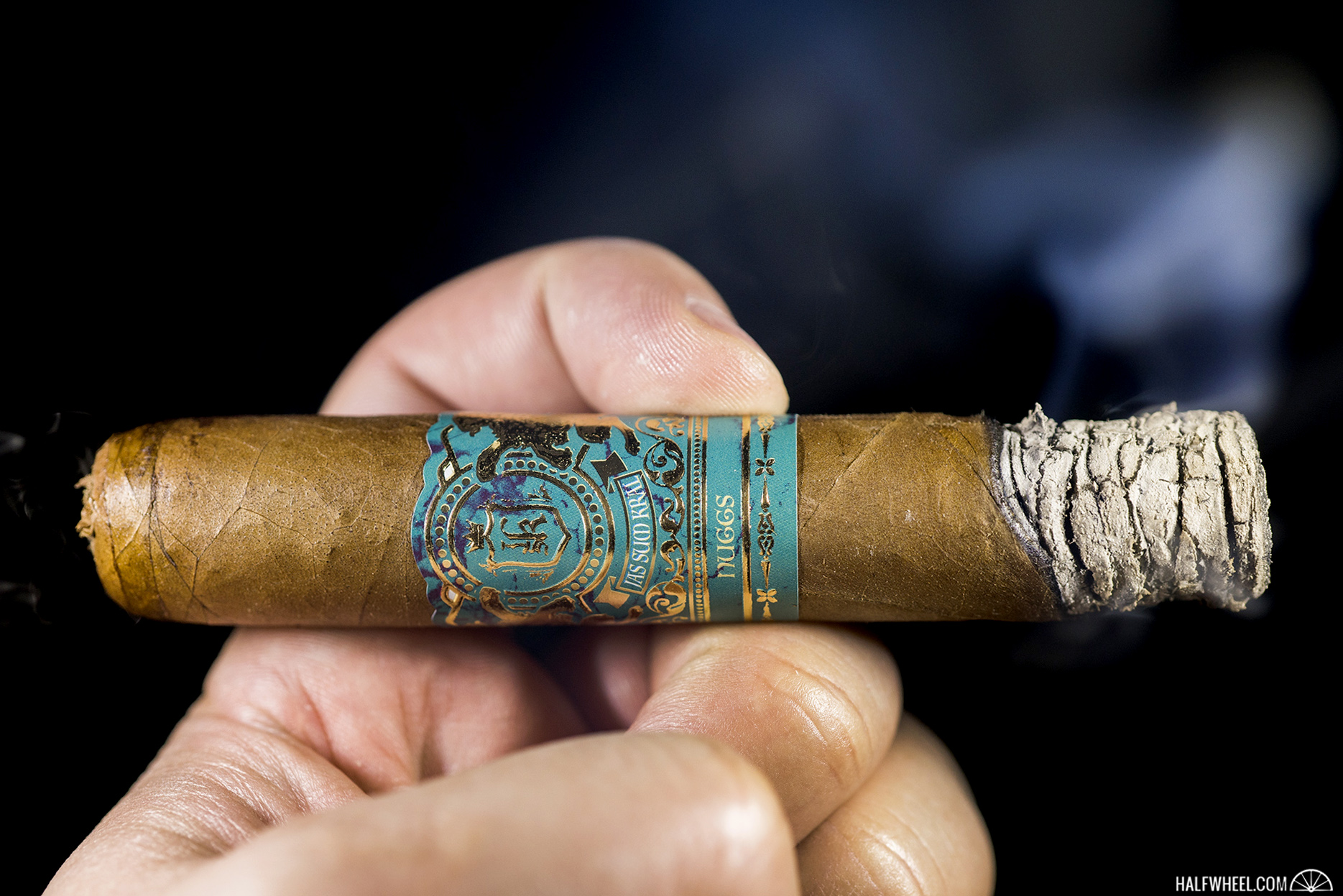 The second third of the Nuggs provides even more nuttiness, now joined by coffee and white pepper. Retrohales have a weird sourness that then turns into a honey mustard like character before being rounded out by bread flavors. The flavor is medium-full, body is medium-plus and strength picks up to medium-full. All three cigars struggle with burn issues, some due to the cigar staying lit and another due to a crooked burn. Of note, the one cigar that burnt through the first third in record time slows down, although it is still burning quick enough that I expect the cigar to be over in less than an hour. 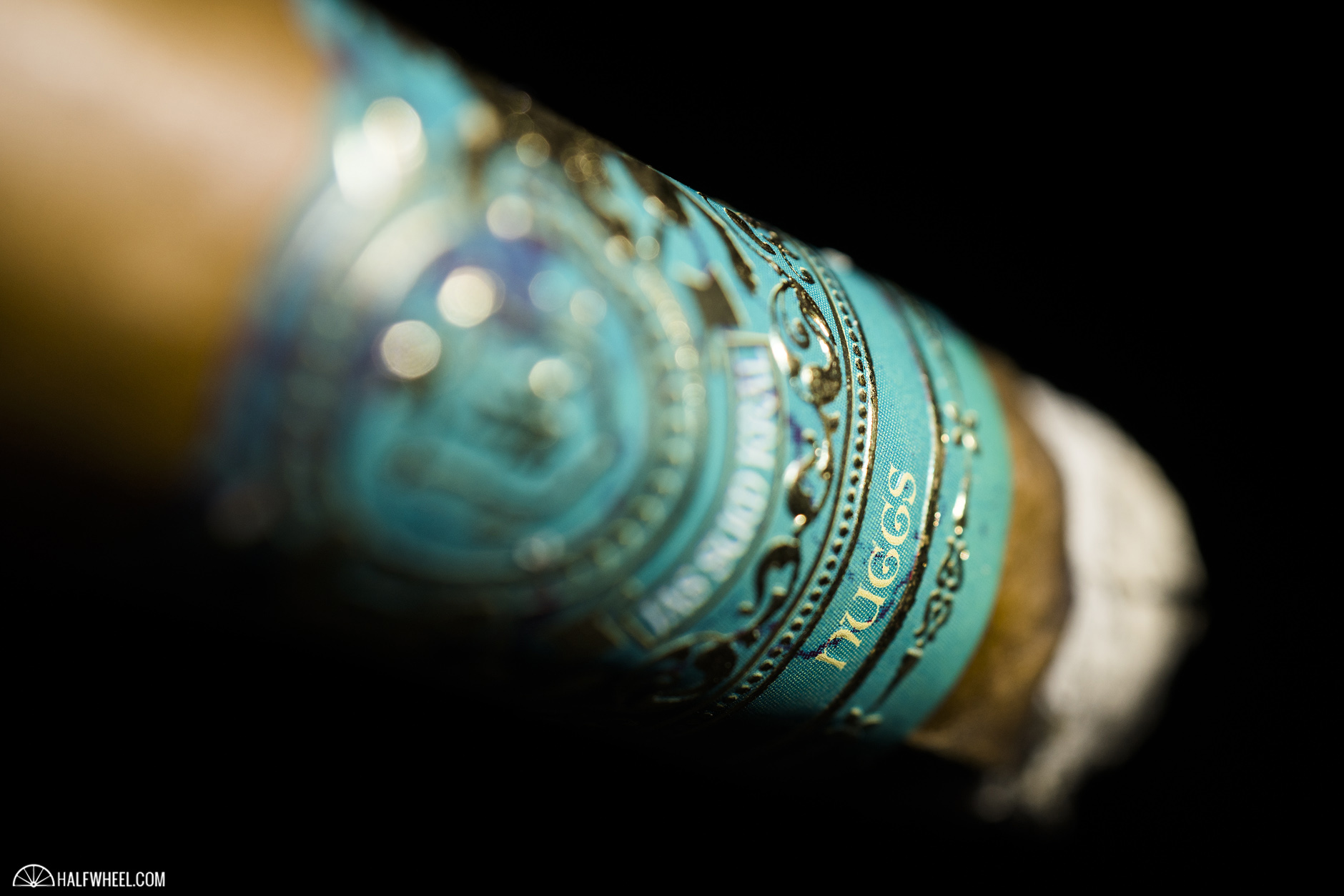 In a lot of ways, the final third of the Nuggs is an extension of the second third and in some ways, it’s similar to the cold draw. Some puffs deliver a nice array of developed flavors, but many others are quite generic leaving me unable to identify many flavors beyond “burnt.” The nuttiness remains at the forefront of the profile, though now joined by earthiness and a gyro meat flavor, something I haven’t found in a cigar in quite some time. There are some herbal flavors also breaking through, although I wouldn’t describe them as the same herbal sensation one gets from marijuana. By the end of the cigar everything is on the lighter end of medium-full. 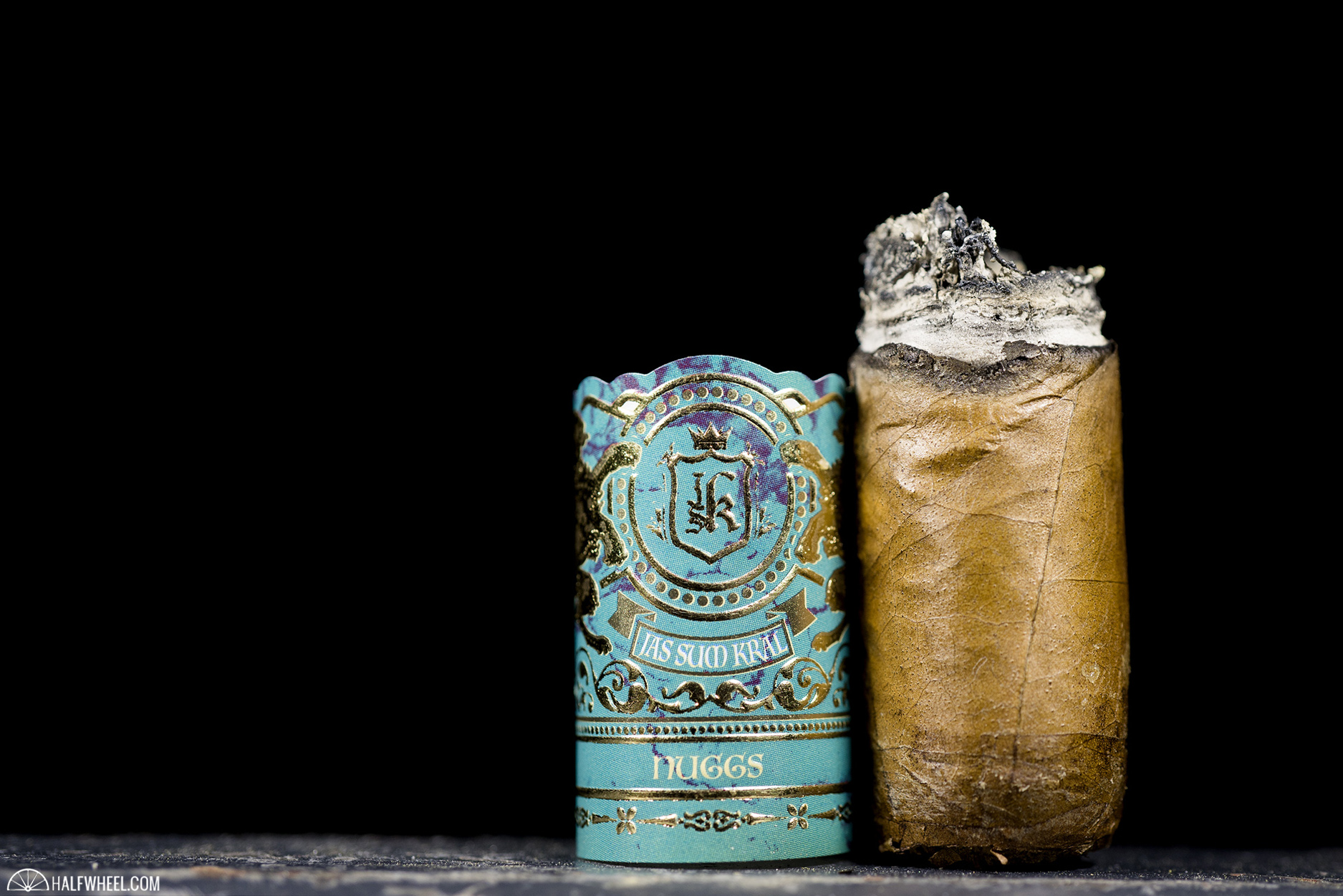 This is still a cigar blog and our process is to review cigars in the same manner each and every time. So while every other discussion of the Nuggs will start and end with CBD, mine will finish with the cigar. I think this is somewhat in the middle of the pack for JSK offerings to date, at times showing very developed flavors, but oftentimes lacking that precision. Outside of touch-ups, particularly after the first third, I can’t say there are many negatives about the Nuggs, but I do wish the exemplary characteristics were more consistent.