At the 2014 IPCPR Convention & Trade Show, Joya de Nicaragua released Joya Red, a medium-bodied blend that incorporates Nicaraguan tobacco in the binder and filler and is wrapped in a habano leaf also from Nicaragua. The new cigar was launched in four different vitolas, all of which are sold in boxes of 20: Joya Red Short Churchill (4 3/4 x 48), Joya Red Robusto (5 1/4 x 50), Joya Red Toro (6 x 52) and Joya Red Cañonazo (5 1/2 x 54).

Visually, the Joya Red seems very close to the ones I smoked for my first review, which is not surprising considering they came from the same box. The wrapper is a dark brown, and quite smooth to the touch, with almost no tooth at all. There are very few veins present, but a noticeable amount of oil, and the cigars has some nice give when it is squeezed. Aroma from the wrapper is a combination of dark cocoa, leather, manure and cedar, while the cold draw brings a very strong flavor of hay mixed with barnyard and leather, almost like I was sucking on an old saddle that just came off of a horse.

The Joya Red Robusto follows the scent and cold draw quite a bit, starting off with a dominant creamy leather note, interspersed with other flavors of dark cocoa, hay, earth, barnyard, peanuts and earth. I am picking up some very distinct vanilla bean sweetness on the retrohale at first, along with a  slight cinnamon note on the finish. There is a touch of spice on the tongue, although it does not last very long, dissipating totally by the tenth puff or so. About a third of the way into the cigar, I begin to notice the vanilla bean sweetness is changing, morphing into a small but district sweet cherry flavor that only gets stronger as the burn reaches the halfway point. The black pepper on the retrohale stays fairly consistent and at about two-thirds of the way in, the dominant flavor shifts to more of a combination of dark cocoa and peanuts, and continues that way until the end of the cigar. 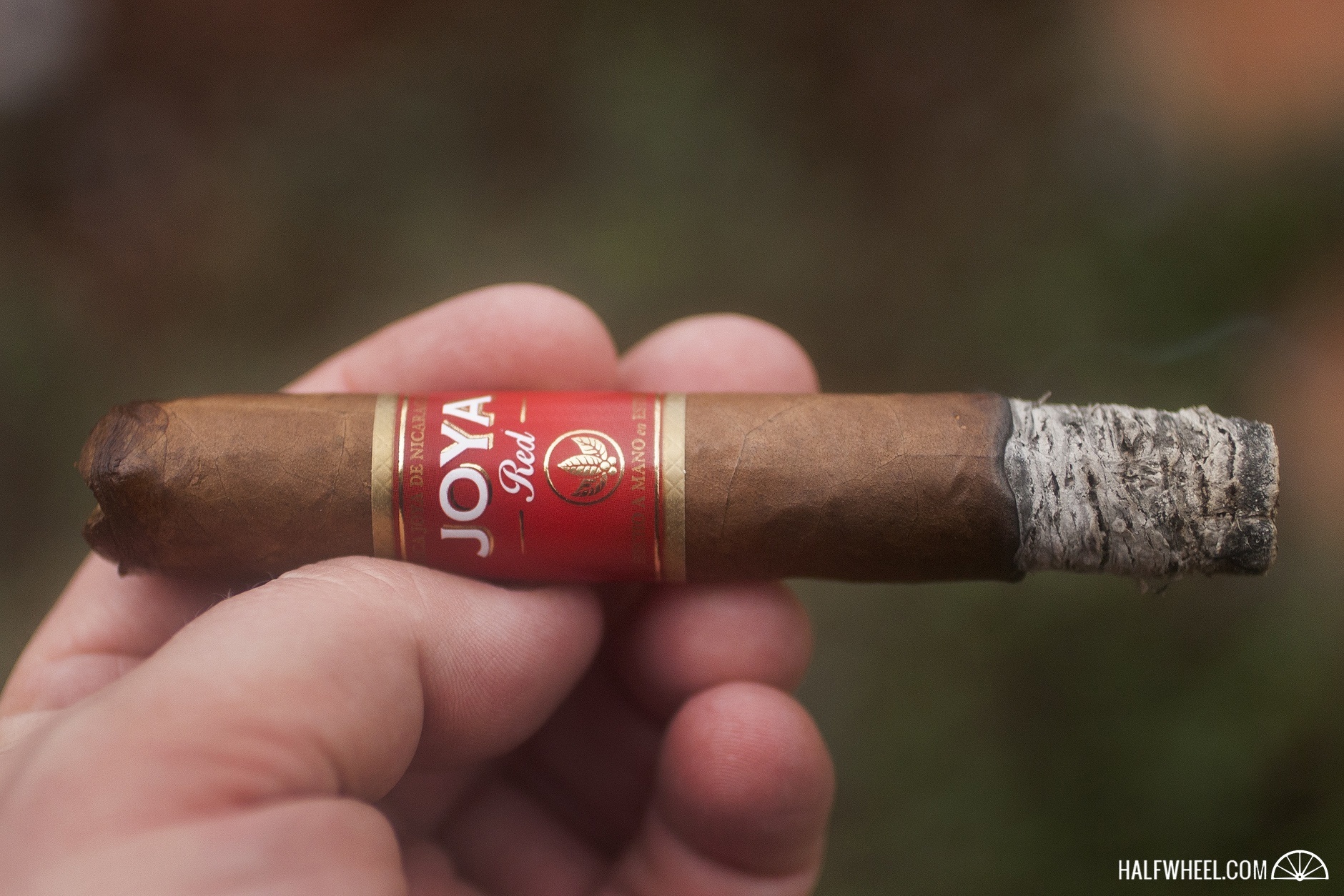 The overall construction is fantastic, with an excellent draw and a burn line that stayed mostly straight despite not being touched up once. Although far from being overwhelming, the smoke production is quite high, and the ash is well formed, falling off in nice, solid chunks every inch or so. Strength-wise, the Joya de Nicaragua product hits the medium mark right around the halfway point, but stalls there, never threatening to go any higher.

I was impressed with the Joya Red the first time I smoked it, and I have to say, I am even more impressed after it has aged for eight months. The time has allowed the profile to smooth out quite a bit, with noticeably less pepper on the retrohale and spice on the tongue, although both are still present throughout the smoke. The cherry sweetness on the retrohale was a new note, but really bumped up the complexity of the profile and I hope that sticks around as it continues to age. New or aged, the Joya Red is a winner.