It was a cigar that celebrated not just Joya de Nicaragua, but also the company’s ties to Nicaragua. This was visualized on the back of the bands where designs paying homage to the factory, the oldest in Nicaragua, a cigar roller and a volcano.

As far as the cigar itself goes, here’s what I said last November:

When you look at Joya de Nicaragua’s last few releases, we’ve seen a trend. There was Cabinetta in 2010, CyB last year and Rosalones which has trickled out into the U.S. market this year. At best, these are medium cigars, a far cry from what Joya de Nicaragua has become known for in the U.S. Mild cigars are important—it’s a much bigger market—and Joya de Nicaragua has made some good ones, but it’s not really Joya. Fortunately, Cuatro Cinco took some of the finesse the company has exhibited in the aforementioned releases and added it into a profile that is more Antaño. The result is a cigar that makes you smile, and then feel the nicotine, the way it should be. Without borrowing a new name for another vitola in the portfolio, Cuatro Cinco is the closest thing Joya de Nicaragua can roll to a Lamborghini.

I still like the band, a lot. There’s a great new age and retro contrast, one that I think will stand the test of time. A far as the Nicaraguan puro is concerned, I’m unable to pick up the blueberry notes from the wrapper, instead it’s chocolate, sweet barnyard and a fair bit of lacquered wood. I also cannot find the blueberry flavor on the cold draw. What I do get is a fruity sweetness, lacquered wood and very bitter espresso.

Lighting up the Cuatro Cinco presents a pretty dramatic change from what I remember. There’s a much more medium start, although I can still feel a good bit of nicotine. All over the tongue are almonds, somewhat sweet and very smooth. There’s a sugar-rich cake note on the finish, which really helps to add depth. As the cigar progresses cedar, sweet leathers and cocoa add themselves to the mix—a solid delivering of Nicaraguan flavors but with almost no pepper to contrast. Eventually the unique blueberry note comes to fruition, right around the halfway mark, before disappearing an inch later. Creaminess and pepper make themselves known towards the end, a bit of too little, too late in my opinion. 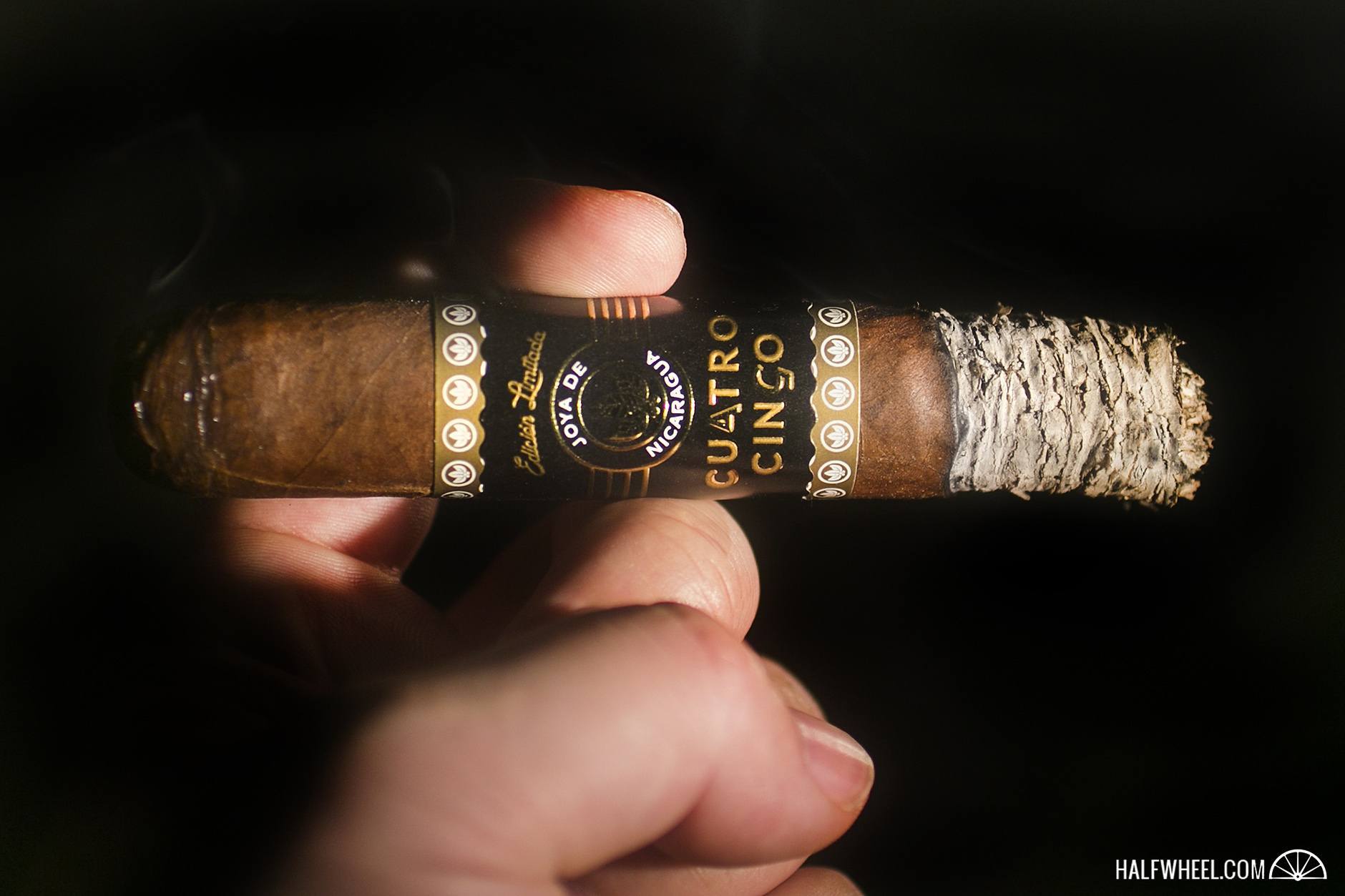 Construction is great. I opted for a v-cut and was greeted with a pleasant draw that is right down the middle as far as looseness/tightness. Burn and smoke production are fine, although I really wish the smoke would have carried more weight and thickness, as it would have dramatically helped the body.

The cigar for this review was likely provided by site sponsor Joya de Nicaragua. In addition, site sponsor Atlantic Cigar has the Cuatro Cinco for sale here.

I announced that I was really interested to see where this cigar was in eighteen months—or around this time next year—and in many ways I still am. That being said, I would have hoped that the cigar was a bit fuller now than it is now. Joya de Nicaragua has once again refocused its efforts on making a medium cigar, something the company has clearly felt has been an essential part of its offerings. As far as I’m concerned, the current state of the Cuatro Cinco is a very good medium cigar. I still think there’s plenty left in this cigar and am not giving up on my eighteen month prediction, but I definitely was more impressed was the fresh version of this cigar than its current state.