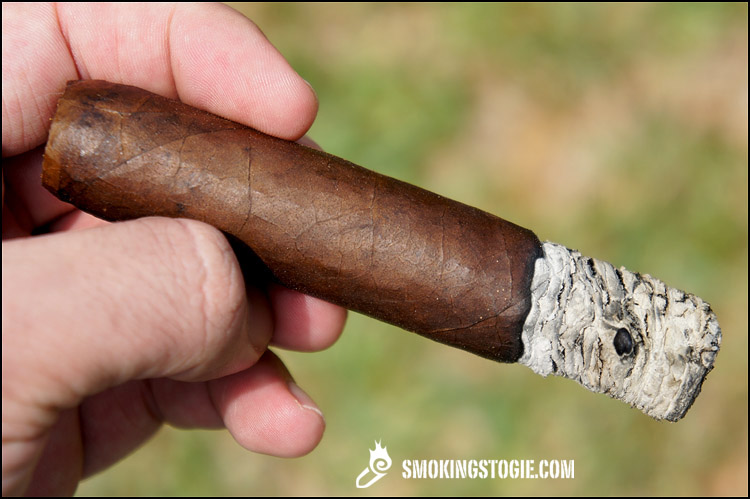 The newest release from Jonathan Drew, My Uzi Weighs a Ton (MUWAT) is the end product of a journey that started with Jonathan creating a blend during on the Cigar Safari tours last November. As Jonathan himself said:

“The beginning of the project actually started during the B.O.T.L tour because this was the very first time that we did a Blending Session at the Joya de Nicaragua factory during the Cigar Safari Tours. I was all amped up because I would get to enjoy the session like all the other guys instead of leading it at the DE camp. I remember that it began with a 5×54, but soon thereafter morphed into a 6×60. Just to make matters more complicated, (my signature) I brought a whole bunch of different leaves from DE over to JDN to use for my personal blend.

About 8 months later or so, the blend was finally right to drop on the market. I believe that it is medium to full, with a special sweetness that is distinctly found in the Brazilian Mata Fina filler. Needless to say, I’m pretty pumped about it, and I hope to release other interesting Series to the concept, including other sizes and blends – but only if it stays raw and local.”

MUWAT is not being released under Drew Estate name but rather as joint release from Subculture Studios and Joya de Nicaragua.  As Jonathan described:

“UZI is manufactured at the JDN Factory by their torcedors in three sizes (5×60, 6×60, and 7×60), BUT the materials for the cigars are mostly DE, including the Maduro Capa, Connecticut Capote, and half of the filler – which is Brazilian Mata Fina. The other half of the filler is Joya de Nicaragua’s Nicaraguan strong filler. Sooner or later, I will get more specific on leaf variety for the blend. Subculture Studios is the Grafiti & Art factory run by Jessi Flores (Some of you know him as Fatboy, Victims, or Dectown) and is the home for a lot of the creativity that you have seen from DE throughout the years. I believe that MUWAT is going to be a really creative project, with a lot of experimental and interesting uses of heavy leaf and artwork to match – so this is why I have decided to mark it as Subculture Studios.” For the time being the MUWAT will only be available in the 60 ring gauges but Jonathan Drew that he hopes this is just the beginning of this project. (Photo by JDN) Now that you know the story behind the Uzi, let’s see how it performs. The wrapper on this cigar is mottled dark brown with some oil and slight tooth. The veining is minimal and the construction appears to be good with no soft spots and a solid feel. The wrapper itself has a predominately leather smell with a hint of sweetness, at the foot it smells primarily of dry hay and manure.

After the first few puffs I must say that I am a little surprised by the flavors of the Uzi. There is a very light cinnamon spice with an underlying sweetness and that is about it. When retrohaled the smoke has an almost incense smell to it. I am surprised because with a name like My Uzi Weighs a Ton I was expecting a more powerful in your face flavor profile and at least at this juncture the cigar is quite mild. Progressing through the first third nothing really changes, the main flavors continue to be a light spice with an underlying sweetness. The Uzi produces plenty of smoke but it is medium to light in body with a medium finish.

Into the second third of the cigar the spice is picking up slightly and the sweetness remains. At this point I am really searching for something else in the cigar. Something about the flavors just seems incomplete and hollow. To me it seems like the spice and sweetness should be complementing a core flavor that just doesn’t seem to be present. A lot of larger ring gauge cigars seem to have this quality where the flavors are subdued and thin though, so it may just be a product of the large ring gauge. The final third finds the spice increasing more becoming better balanced with the sweetness. At this point the flavors are finally beginning to feel complete. The Bottom Line: I couldn’t help but feel at times like there was something missing from the core of this cigar. The spice and sweetness were complex and interesting but up until the final third felt like they should have been wrapped around some other core flavor. That being said I’ll quote Jonathan Drew who quoted Steve Saka saying “If you try to make a blend that everyone likes, you won’t make a blend that anyone will love.” I definitely didn’t love the Uzi, but I have no doubt that there will certainly be people out there who will.