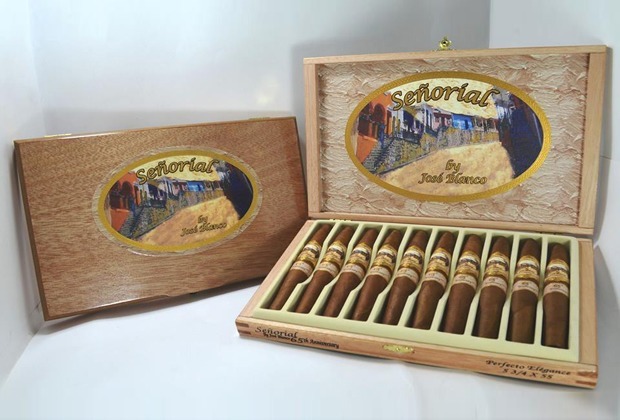 José Blanco kicked off the celebration of his 65th birthday today with the announcement of a new limited production size in Las Cumbres Tabaco’s Señorial line, a 5 3/4 x 55 figurado he’s calling Perfecto Elégance.

In a press release issued Monday, Blanco cited the launch of his new company and its first cigar, as well as a move back to the Dominican Republic all coming together to make 2014 a very special year for him, and his 65th birthday provided an opportunity to celebrate with a new vitola. He is limited the release to brick-and-mortar retailers only, and when it arrives will have an MSRP of $14 per cigar, a significant jump over the prices of the rest of the Señorial line, which ranges between $7 and $10. Production has been announced at 2,000 boxes of ten cigars, with Tabacalera Palma handling the manufacturing. The factory and farms are run by Jose “Jochy” Blanco, José’s cousin.

While a specific release date has not yet been announced, Blanco said that the cigar will be released after 90 days of aging. Emma Viktorsson of Las Cumbres Tabaco said the current plan is to have them at retail during the second week of November.

At the 2014 IPCPR Convention & Trade Show, Blanco confirmed that he is working on a lancero for the Señorial line, though it does not yet have a release date, as well as a maduro version slated for 2015.

(Shipping information was added shortly after the original story was published.)