First introduced in 2011, the JFR, which stands for “Just For Retailers,” brand from Casa Fernández is meant to be sold by brick and mortar retailers exclusively. The brand is known for not only for its wallet friendly prices, but also for its multitude of larger ring gauge cigars, including a 7 x 70 and 6 x 60.

In November 2014, Casa Fernández posted a photograph of a new cigar to social media that would be the first in a new line for the cigar company. Named JFR Lunatic Mambo, the 8 x 80 belicoso is the inaugural release in JFR brand’s Lunatic line. The JFR brand also includes the original JFR line and the JFR XT, which was introduced earlier in 2014.

Blend-wise, the JFR Lunatic Mambo is composed of a Mexican San Andrés wrapper over Nicaraguan tobacco used in the filler and binder, and is rolled at Tabacos Valle de Jalapa S.A. (TABSA) in Estelí, Nicaragua. The cigar is priced at $8.80 each, with boxes of 16 selling for $140.80. There is nothing else to say when you first see this cigar: it is massive, almost comically large and heavy in my hand as I hold it. The wrapper is a dark espresso color, and while it has some tooth to it, there are very few veins visible. The cigar features both a covered foot and a rounded belicoso cap and it is fairly spongy when squeezed. Aroma from the wrapper is a combination of slight cedar, earth and manure, while the cold draw brings flavors of barnyard, leather and dark cocoa, along with a small amount of black pepper.

The JFR Lunatic Mambo starts off with flavors of basic tobacco, coffee and earth, along with a minor amount of sweetness that comes and goes throughout the first third. There is some slight black pepper on the retrohale and a bit of spice on the tongue, but neither are all that strong as of yet. Smoke production off of the foot is overwhelming, to the point that I felt like I had a permeant cloud of smoke around me at all times. Construction-wise, the draw is nice and firm, and while the burn is far from razor sharp, it is better than I expected for a cigar with this much tobacco in it. The strength is nearly nonexistent so far, and falls far short of the medium mark by the end of the first third. 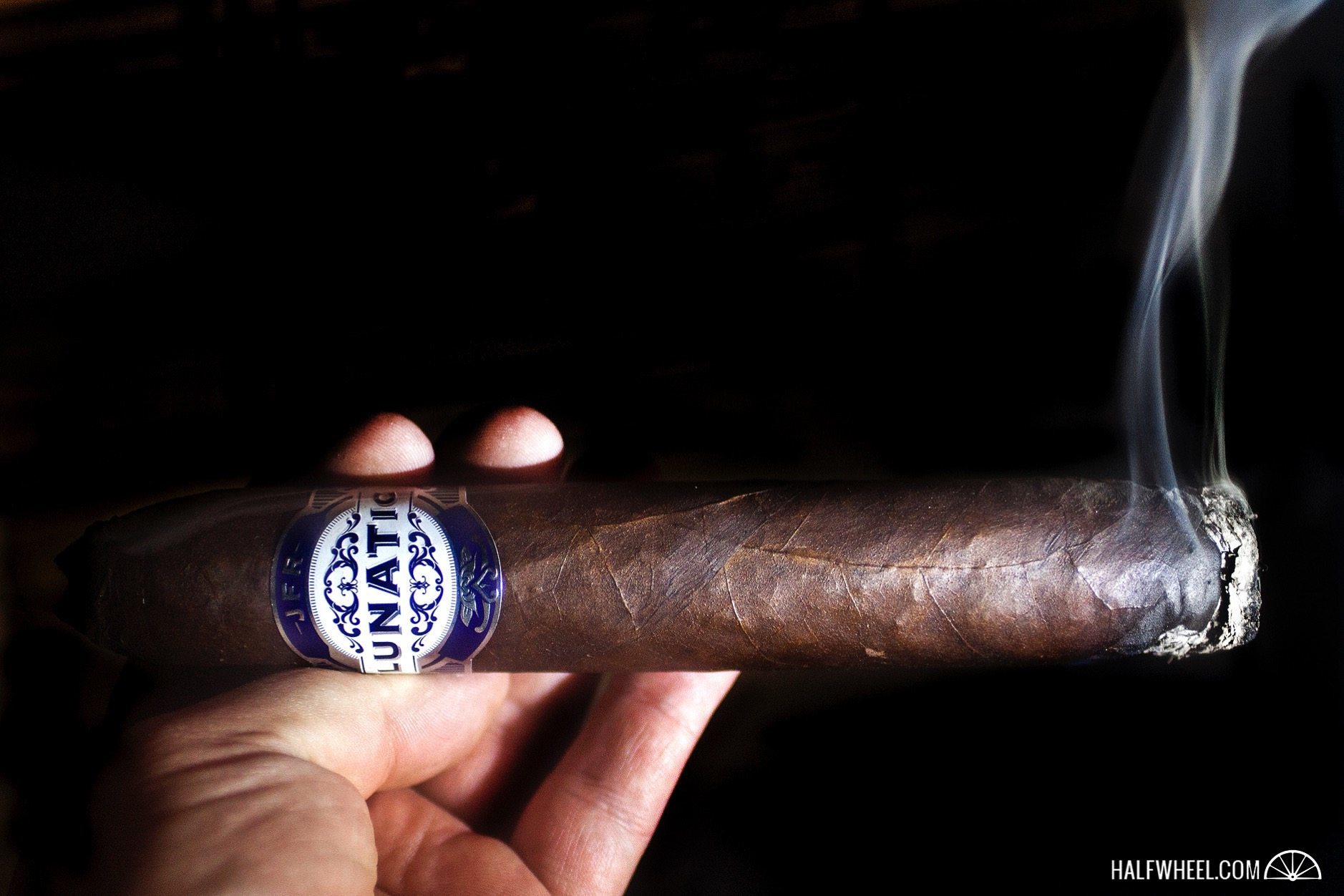 Unfortunately, the second third of the JFR Lunatic Mambo is much like the first, with a dominant combination of tobacco and earth, interspersed with flavors of coffee, leather, barnyard and hay. The sweetness from the first third is still present, but is still not strong enough to really place as anything specific and while the black pepper on the retrohale remains fairly consistent, the spice that I noticed on my tongue is long gone by the time I reach the halfway point. Smoke production is still huge, and while the draw continues to impress, the burn evened out nicely. The one change I do notice is the strength, which and taken a huge leap by the end of the second third, easily ending in the solid medium range. 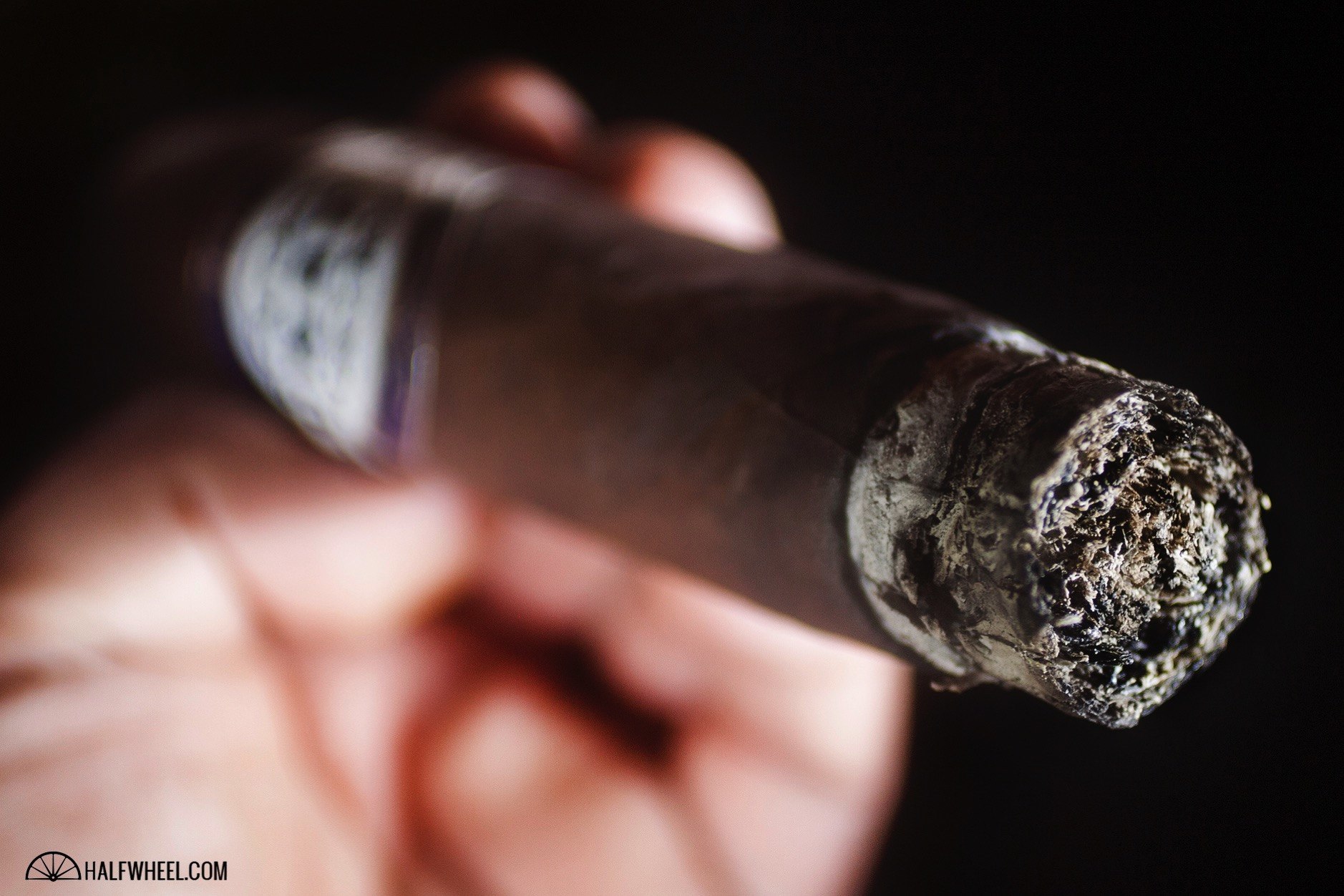 The final third of the JFR Lunatic Mambo continues the trend of the first two thirds: flavors of basic tobacco, earth, hay and leather, with a bit of sweetness that slightly — very slightly — reminds me of maple syrup. There is still a nice amount of black pepper on the retrohale, and the smoke continues to pour out of the foot like a grass fire. The construction is actually quite good at this point, with a wonderful draw and a burn that, while a bit wavy, does not need touching up. As expected, the strength has continued to increase, and ends up firmly in between the medium and full marks by the time I put down the nub three hours and 45 minutes after I lit the cigar. There is no getting around the fact that this is a enormous cigar, and as such, there are some issues that don't come up with smaller vitolas. The main problem I had was getting the delicate balance of smoking too much too quickly in order to keep the large amount of tobacco lit, but not smoking so fast as to turn what flavors it actually does have into a bitter mess. The profile is extremely monotonous, but not offensive in any way, and while the burn was never better than fair, the draw was excellent on both samples I smoked. I am not going to say you have the be a lunatic to smoke one, but you sure have to really want a combination of overwhelming size along with underwhelming flavor and have almost four hours to kill.