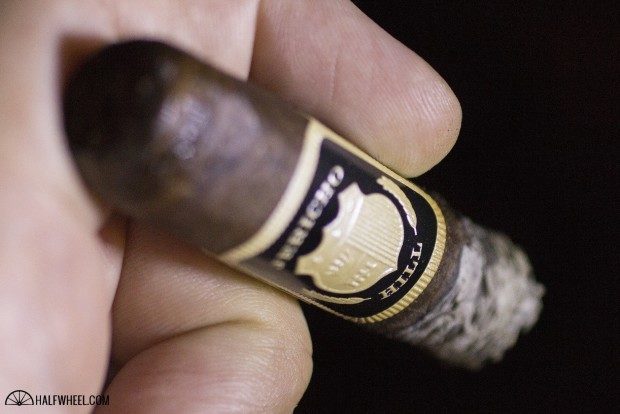 Crowned Heads threw itself into that mix earlier this year when announced the Jericho Hill Shots, the first extension to the brand the company introduced at last year’s IPCPR Convention & Trade Show. Unlike other cigar companies, Crowned Heads seems to be embracing the idea of the winter theme with the cigars limited and seasonal.

“Jericho Hill Shots is our concept of a seasonal (winter) release which will address the necessity during the cold months for a short, quick smoke that is also a little flavor bomb,” said Jon Huber, co-owner of Crowned Heads, in an email.  “Total production for 2015 will be limited to 50,000 cigars; however, if all goes as planned, we’ll see ‘Shots’ again in Winter 2016.”

It’s the fifth release for the line. 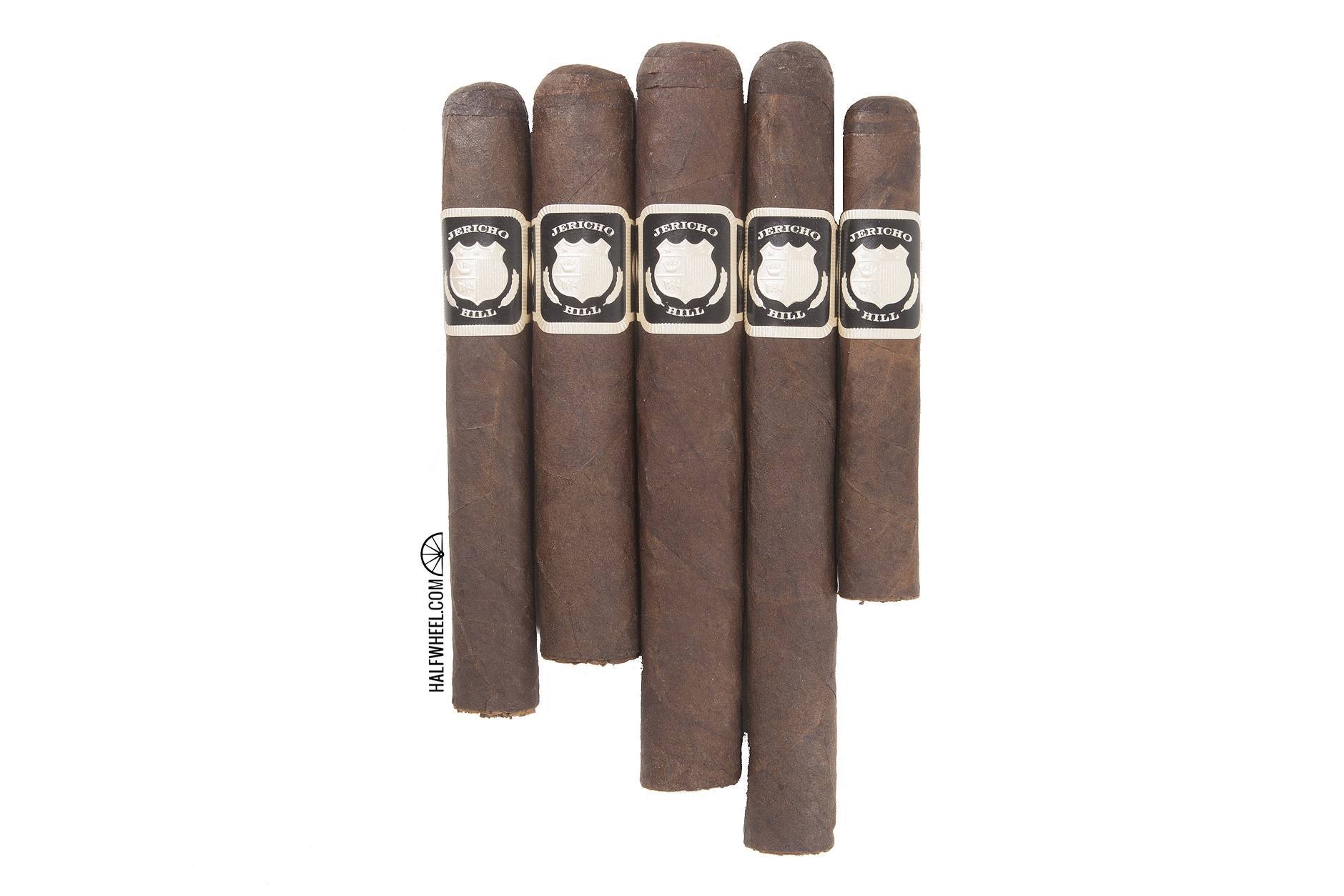 Like the rest of the line, it’s made at My Father Cigars S.A. using a Mexican San Andrés wrapper and Nicaraguan fillers.

Also like the rest of the Jericho Hill line, it follows the theme of Johnny Cash’s “Cocaine Blues.” The word shots is used multiple times and with different meanings, for example, “I took a shot of cocaine and I shot my woman down.” 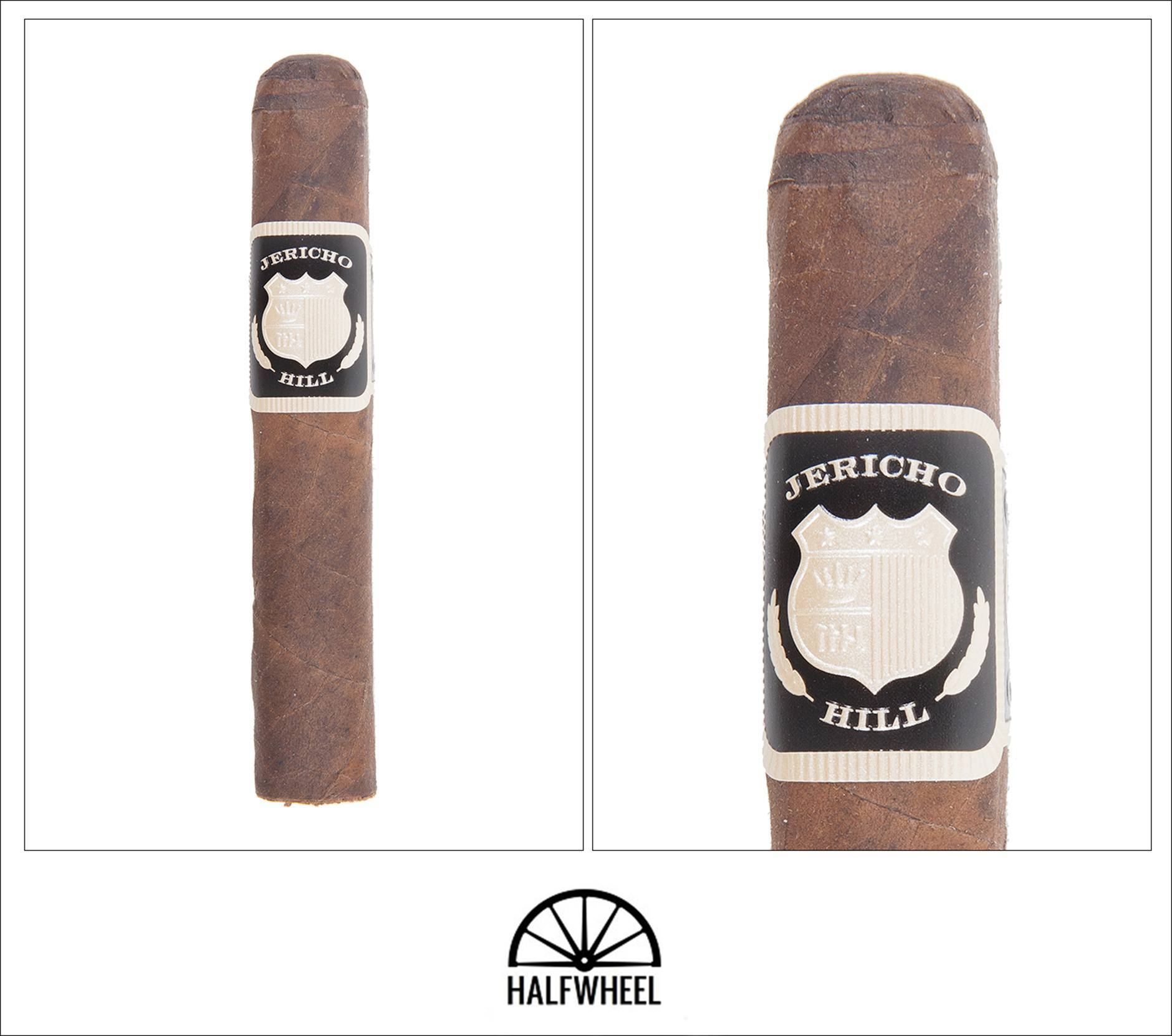 I seem to have drawn the straw when it comes to reviewing short cigars for halfwheel, but this one seems to be even smaller than others. A large part of that is likely due to the band, which is the same height as the rest of the line, changing the perception quite a bit. At first glance, it looks like someone might have just the end off of the 6 1/2 inch LBV vitola, but upon closer inspection the difference between the 42 and 46 ring gauge becomes pretty apparent. Aroma off the Mexican wrapper is earth, chocolate and leather. From the foot, I find a similar leather, a sweeter cocoa note and some citrus flavors. The cold draw has a peanut flavor, although it’s much more akin to the drier flavor of putting the shell in your mouth, some caramel and some dry sponge cake.

The draws tighten up across the board on the Shots once the cigars are lit. Initial flavors are slightly sweeter, but there’s some saltiness joining woods up front and a sweet coffee ice cream flavor through the nose. Earth, cedar, red pepper and sweet peanut butter quickly come to the front of the profile, while there’s a plethora of nuttiness in the nose. Flavor is medium with a medium-plus strength. 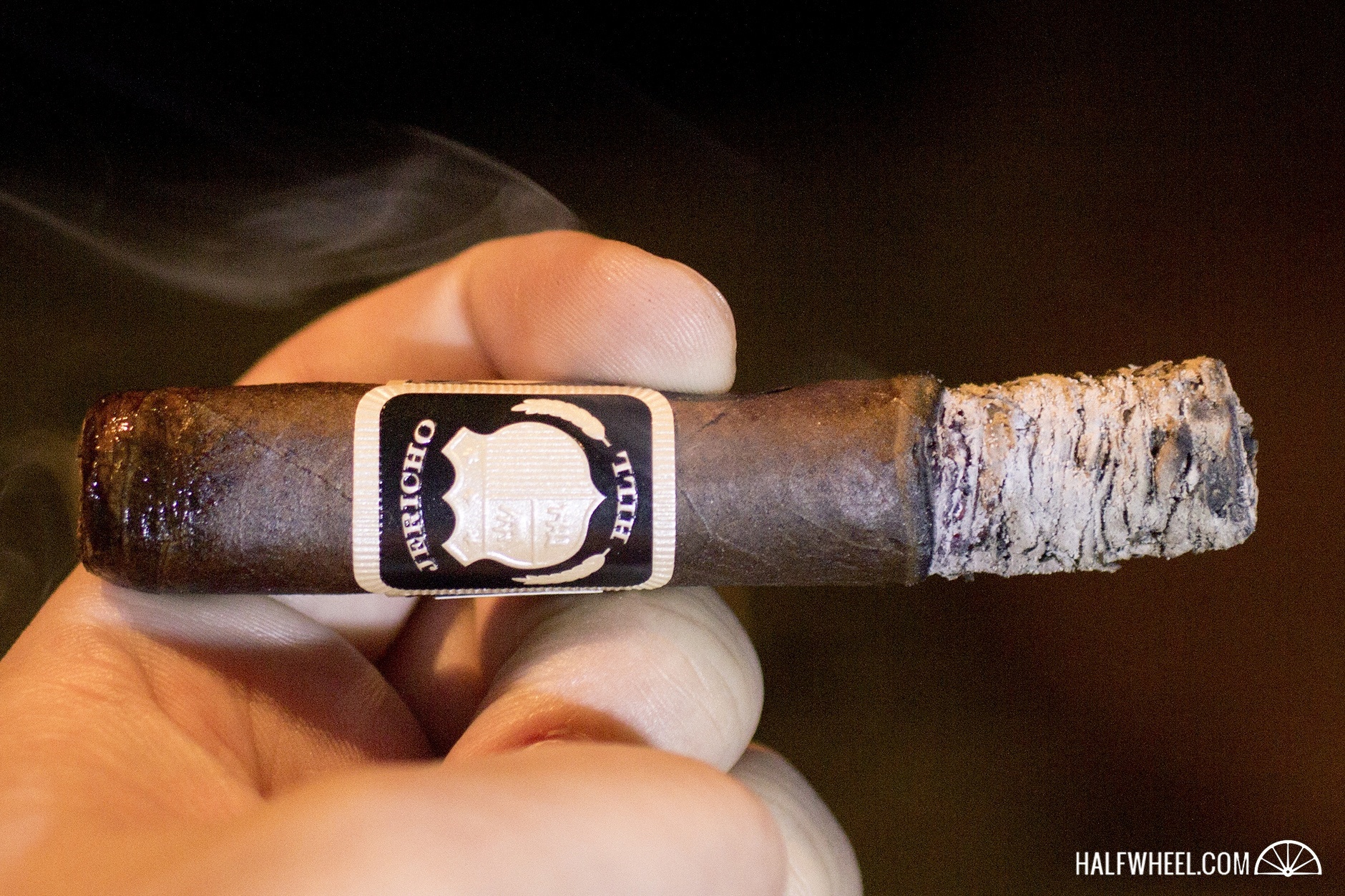 After about 15 minutes, the Jericho Hill begins to speed up and get warmer. There’s an added harshness, although slowing down puff rates to less than a minute keeps it under control. Peanuts remain, joined by a huge grainy bourbon note on the back and some grassiness. I find myself really wanting something a touch sweet, as the sweetness of the cigar has been sucked out. 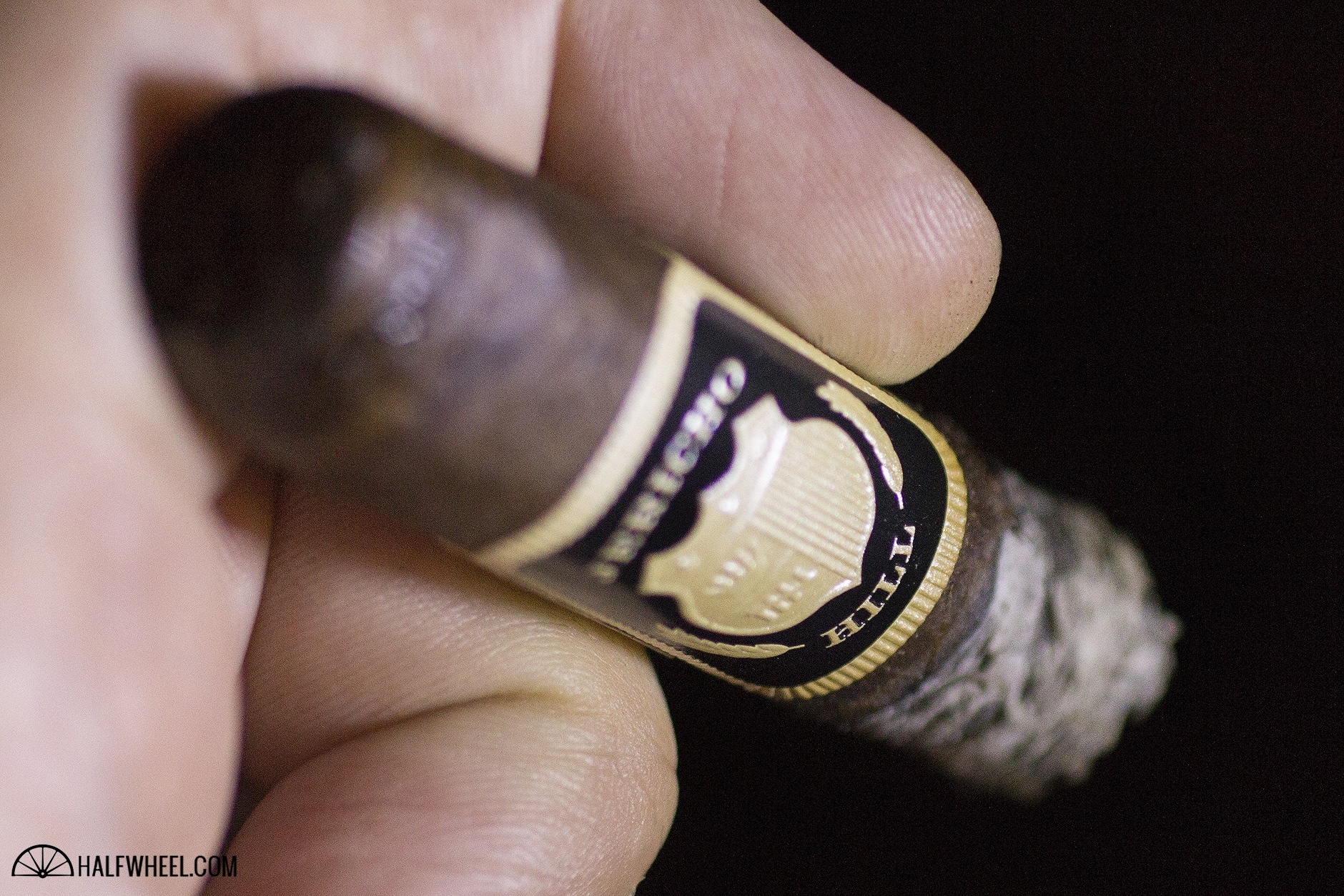 And then my fingers are almost burning. The Jericho Hill Shots moves quickly after the first inch, so much so that I’m caught a bit off guard each time I enter the last inch. The peanut flavor regains some of its sweetness, with creaminess and an orange citrus no doubt helping. There’s meatiness, cedar and grassiness on the middle of the tongue, but the bourbon flavor is all but gone. The cigar ends about where it started strength-wise, somewhere north of medium. 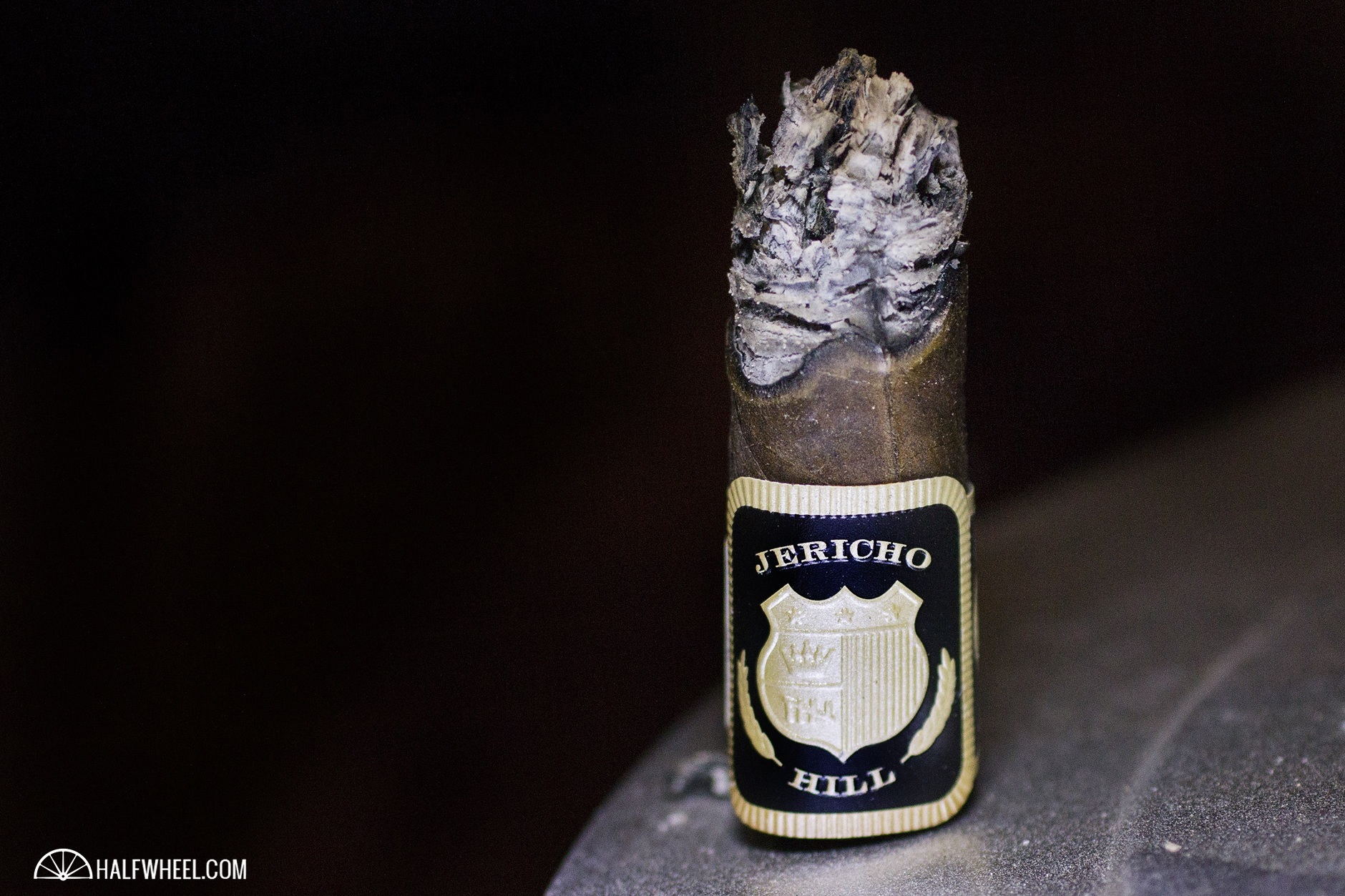 I think the Jericho Hill Shots is what we envision most smaller winter cigars to be, or at least what I’d hope them to be. It’s small and short version of the line at a slightly more affordable price. While that makes for a boring conclusion to this review, it makes for a pretty good 35 minutes.