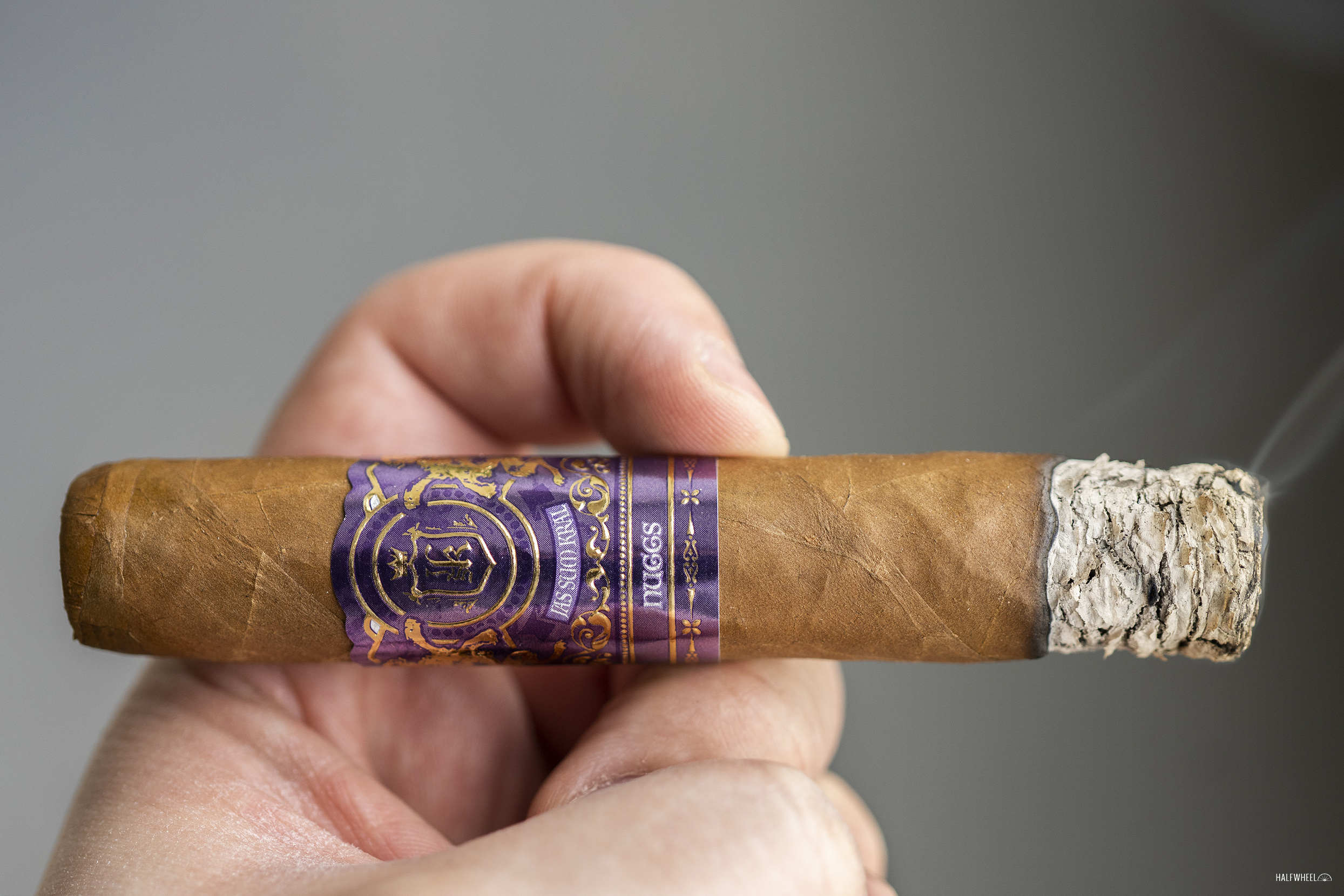 Amongst the list of “interesting cigars” from the last couple years, few would rival any of the entries from Jas Sum Kral’s Nuggs line.

In early 2019, Jas Sum Kral became the first known company to sell a premium cigar infused with cannabidiol, more commonly known as CBD. In between the original Nuggs—which used 20mg of CBD—and the Nuggs Maduro—which uses 100mg of CBD—the company announced the third version of Nuggs.

That cigar is the Jas Sum Kral Nuggs Kine Puro Selection, which is infused with 25mg of tetrahydrocannabinol, better known as THC.

CBD and THC are both cannabinoids, one of the hundreds of different molecules that can be found in marijuana. THC is believed to be the reason why people have a psychoactive reaction to marijuana—i.e., it’s the one that gets you high—where as CBD is believed to be useful in treating a variety of ailments. In 2018, Congress made hemp-derived CBD legal on the federal level as the plant contains less than 3 percent THC. That opened up a the market to a flood of products offering to deliver CBD in forms that range from edibles to drops to dog treats.

The Jas Sum Kral Nuggs Kine Puro Selection Jack Herer is the THC-infused cigar. It’s a 4 1/2 x 48 Rothschild that uses an Ecuadorian habano wrapper over an Indonesian binder and Nicaraguan fillers from Estelí and Jalapa. Buc’s Reserva—the online storefront that Jas Sum Kral is using to sell the cigar—indicates that this cigar uses the Jack Herer strain of hemp for the THC, more specifically:

Kine Puro Selection first release is a Jack Herer. A great strain that promotes creativity while a nice head high sets in . A great wake and bake combo for the morning smoker.

The Jack Herer Collection is 25mg of thc infused into each cigar.  Which is derived from the cbd hemp plants of the strain. The thc derived is separated and infused into the cigar.

Jack Herer was a famous marijuana and hemp advocate who has strains named after him.

Unfortunately, things get pretty confusing from there. First, the cellophane on the cigars indicates that there is “20mg,” not the 25mg that is listed on the website. Riste Ristevski, founder of Jas Sum Kral, confirmed that it’s 25mg.

He also indicated that the description of exactly what type of THC—and yes, there are types—might not tell the full story. The box says that it is made with Delta-8, a specific THC molecule that is known to produce psychoactive results. It also references Delta-9, which is believed to produce a stronger psychoactive reaction. It’s unclear how much Delta-8 or Delta-9 might be in each cigar, just that it’s 25mg of THC. The first thing I notice is that the cellophane is quite a bit different than most cigars. Rather than running the full length of the cigar and then being folded over—closing the bottom of the cellophane—it’s just left open, meaning the bottom of the foot is exposed. The aroma from the wrapper is quite weird. Despite the cellophane covering, I can’t pick up much, though what I do smell reminds me of parchment paper and a fruit-scented household cleaner. The foot is much stronger and more pronounced, around medium-full. There’s an herbal sensation that reminds me of a marijuana tincture, as well as something that reminds me of a low-end enchilada sauce with tomatoes and meatiness. It’s different, but I’m not sure I would immediately think this is THC-infused. The cold draw is a lot more pedestrian with earthiness, cedar, floral touches and something that reminds me of marijuana butter, though it’s pretty mild. Given that some cigars have more pronounced marijuana-like sensations, I’m not sure I’d immediately think THC infusion if I was smoking this blind.

While there were hints of the THC infusion before lighting, the first puff of the Jas Sum Kral Nuggs Kine Puro Selection Jack Herer is quite normal. There’s lots of cedar as well as some earthiness over a citrus sensation that varies between oranges and lemon. After a few more puffs, I can begin to taste what I believe is the THC infusion. As with the cold draw, my best description of it is a flavor that reminds me of a marijuana butter. It sits below earthiness, nuttiness and a bit of black pepper. The finish has more of the marijuana butter sensation joined by some earthiness. Retorhales have earthiness, creaminess and herbal flavors, though none of them remind me of marijuana. What’s more noticeable is that the retrohale is full, compared to the main flavor which is medium-full. Retrohales finish with a bit of a Sprite sensation alongside earthiness, muddiness and wheat pasta. Body is full, strength is medium-plus and my level of being stoned is at zero. The smoke production is hardly consistent and I need to make touch-ups to help keep the cigar burning.

The second third of the Nuggs Kine Puro Selection Jack Herer seems like a logical progression flavor-wise. It has an earthy core joined by some teriyaki sauce and some of the weed butter. The finish has earthiness, white pepper, creaminess and some generic fruit flavors. Retrohale produces black pepper, white pepper, earthiness, meatiness and some saltiness. Retrohales finish with creaminess, a stronger version of the marijuana butter, white pepper and creaminess. Flavor is medium-full, body is full, strength is medium-plus and my level of being high is still zero. If I was forced to guess between a THC or CBD infusion, I’d say it seems more like CBD though it’s extremely mild. Construction remains a bit of a struggle thanks to the burn, which isn’t great. Once again, the marijuana-like flavor isn’t present among the main mouth flavors; instead  There’s earthiness, Ritz crackers and creaminess. The flavors seem to be more vibrant than they were before even if they are more or less the same level of intensity. While there isn’t much of the marijuana butter flavor on the main flavor, it continues to show up on the finish. It’s now joined by some more generic herbal flavors and earthiness. Retrohaling produces the marijuana butter flavor, though no matter how many consecutive retrohales I take, I don’t get a psychoactive sensation. There’s also earthiness, leather, creaminess over black pepper. After retrohaling, it leaves behind a finish of white pepper, creaminess and fruitiness, though nothing is in the way of the marijuana butter. Flavor is medium-full, body is full and strength is medium-plus, though getting close to medium-full. I continue needing to make the occasional touch up to keep the smoke production at a decent level and avoiding having the Nuggs go out. If your goal is to get high, the Nuggs Kine Puro Selection Jack Herer isn’t for you. While I suspect that some people might be able to get mildly buzzed, this doesn’t seem like it's a reliable method to feel that sensation. As far as the Nuggs Kine Puro Selection Jack Herer as just a cigar, I prefer the taste more than the two other Nuggs cigars. It’s got a different profile than most of the other non-infused Jas Sum Kral releases I’ve smoked—it has a taste that certainly reminds me of some marijauna-infused edibles—and it’s a pretty enjoyable flavor-wise from start to finish. The issue here is three-fold. First, there’s the fact that this cigar has THC in it. Whether it’s the potential legal issues of possessing a cigar like this or you failing a drug test, that’s a non-starter for some people. Second, this cigar is $20 and it’s not a great cigar for $20. Finally—and the only one of the three issues that affects the score—none of the three samples burned very well. Whether that’s related to the THC infusion or something else, the burn issues were there nearly from start to finish on every sample and the flavor isn't good enough to overcome them.