When it comes to reactions to both the idea of and the implementation of regulations of premium cigars by the U.S. Food & Drug Administration (FDA), the reactions have been a bit varied.

Few, if any, in the cigar industry seemed to welcome or be happy about them, and they expressed their displeasure in a number of ways. Some were more diplomatic, and some were blunter. If there’s any doubt, this cigar definitely sits in the latter category.

Riste Ristevski, creator and owner of Jas Sum Kral, began teasing the cigar in 2019, and on Dec. 24, confirmed that he was indeed going to launch it, with its debut planned for the 2020 Tobacco Plus Expo (TPE) the following month in Las Vegas.

Only the wrapper, a Mexican San Andrés leaf is being disclosed, with the binder and filler remaining a mystery. It’s available as a 6 x 52 toro priced at $9.99 and offered in 10-count bundles which are wrapped with a copy of the cover page of FDA 499-page deeming regulations of certain tobacco products. It is produced at Tabacalera de Aragon S.A. in Nicaragua. The cigar would make its first appearance in mid-March at the 5th Ristefari, an event dedicated to the brand, held at Golde Leaf Cigar Lounge in Hobart, Ind. It then began shipping in mid-June, the first release was 499 bundles of 10 cigars that first went to five stores before the second round of shipping in July and now the cigar is available to all stores. There has also been talk of offering it to international accounts before the end of 2020.

The number of bundles in the initial is a nod to the number of pages of FDA’s main regulatory document. 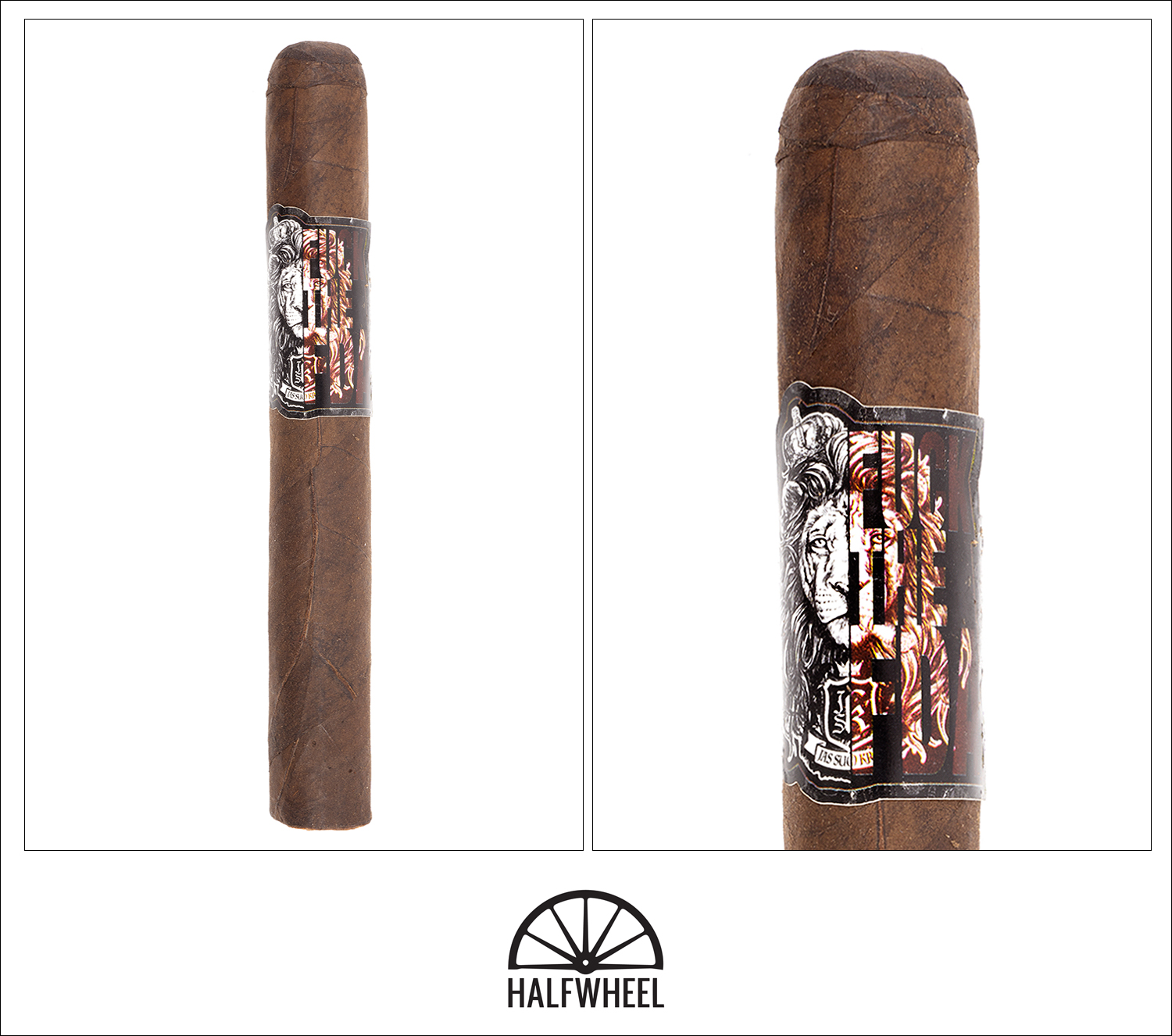 The Jas Sum Kral Fuck the FDA is a fairly standard toro vitola, though the first sample feels like it’s just a bit under both of its listed measurements, and sure enough, it is by just a bit, maybe a 51 ring gauge and some sliver of an inch in length. The wrapper is a rich, dark shade of brown the reminds me of waxy coffee beans, and certainly in line with the standard hues of Mexican San Andrés tobacco. Veins are average in size and number, the seams are ever so slightly visible, and the coloring has just a bit of mottling. I’d say it’s a fair match in the battle for attention with the band, which is certainly striking, even if it at first glance it appears to omit what might be the most notable part of this cigar: its name. More on that in the final notes, so rest easy. Each cigar is decently firm, offering a bit of give but still having a dense core. The aroma off of the foot has an interesting duality, offering a soft texture that reminds me of smelling wool or some other kind of fabric, yet there is something that tingles the nostrils, even though I can’t immediately call it pepper. One sample is potent enough to induce a pair of sneezes, so beware of that. As the aroma opens up, there is the case to be made for wood barrels or shelving, essentially what I’d imagine smelling if I were to walk into an empty aging room in a cigar factory. The third sample is the only sweet one, adding the smell of a fresh cut green grape to everything else. Air moves without problem on the cold draw, and the flavor is more distinctive and definitely lighter, offering a first note that reminds of green grapes before adding that same wood note I picked up in the aroma as well as the dense, chewy chocolate cake donut that seems to have been on my palate a bit in recent months. Pepper here is minimal at best, but there is just a bit. Again, I find myself drawn to how soft the overall profile feels as it hits the taste buds.

I catch some aromatics off the foot of the cigar as I toast it, namely a bit of cedar, pepper and campfire, though without any overt smokiness, while one sample offers a bit of smoky dark chocolate. The first puffs deliver a good bit of pepper, though the accompanying flavors taste just a bit sour and linger on the palate longer than I would like, almost a damp cedar that just isn’t quite right. One sample also has the damp chalk note that I find incredibly off-putting, a head-scratching combination of the most interesting pre-light experience and least enjoyable first inch. As that flavor evolves, I get a flavorful, slightly damp note, reminding me of what I think cedar should taste like, a brief interlude before getting a bit richer and deeper flavor, leading me to oak or maple. The first cigar smokes fairly quickly, and it’s about 15 minutes before the first clump of ash is ready to be knocked into the ashtray, while the others are a good bit slower. Once that happens, the cigar picks up a bit more black pepper, and while the flavor is clean and bright, there are aspects of it that are a bit gritty as the smoke hits the tongue. When it is dialed in, however, there are very enjoyable notes of earthy coffee that coat the tongue without overstepping the other flavors. The first third sits between medium-full and full in flavor, while body and strength are closer to medium. The first sample has a draw that is just a bit loose, resulting in a good amount of smoke with each puff, but otherwise, the technical performance is fine.

If the profile of the Fuck the FDA’s first third had some rough edges, the second third makes fairly quick work of them, smoothing out the flavors without getting rid of the white pepper that lands almost dead center on the tongue with each puff, with one sample still clinging to some chalkiness. Retrohales still have a bit of zing to them as well thanks to that same generally light and bright pepper. The flavor continues to make some very enjoyable refinements as the burn line approaches the final third; as the pepper continues to stay dialed in on the palate, there is now just a bit of cedar sweetness emerging at the edges complementing the now dry wood and earth flavors. The only thing seemingly challenging the enjoyment of the profile is just a bit of heat the sneaks up from time to time, which over-sharpens the profile. The flavor and profile finish the second third a good bit heavier, fuller and more robust than they started this section, and it seems like this may be the most delicate balance this bluntly named cigar will have to maintain: staying full and robust without getting too rough on the palate. Flavor now sits fairly close to full, body medium-full if not full at times, and strength progressing from medium to full as well. The draw, burn and smoke production have all been very good. While the second third does a good job shaving off the rougher spots of the profile and developing the flavor into a fairly enjoyable offering, the final third sees the slow undoing of that work. Most notably, the profile struggles to maintain its balance at points in the final third, as the pepper wants to both be let off its leash while also getting a bit smokier and rougher on the palate. Chalk returns in one sample, while a general a bit of sourness comes back in two of the samples, growing in intensity as the cigar progresses and taking off in the final inch and a half, leading me to think the time to put this cigar down has come. The draw, while still just a bit open on the first cigar, is more than acceptable, smoke production is plentiful, and For as much force and fury that the name of the Jas Sum Kral Fuck the FDA carries, the cigar itself falls a bit short in comparison. The start of the cigar isn't the best I've had, and in some cases can be a bit off-putting, needing the entire first third to right the ship. The second third is where to find pretty much all the best that the blend has to offer, so enjoy it, as the final third generally sees it come undone with each puff, leading to a finish that generally didn't leave me excited to light up another one. The construction was mostly good, save for the issues with the tobacco at the head of two samples, and a slightly loose draw in one cigar. It's worth a try, and while I certainly appreciate the sentiment, the cigar ultimately left me feeling a bit disappointment that its blend didn't live up to the cigar's message.