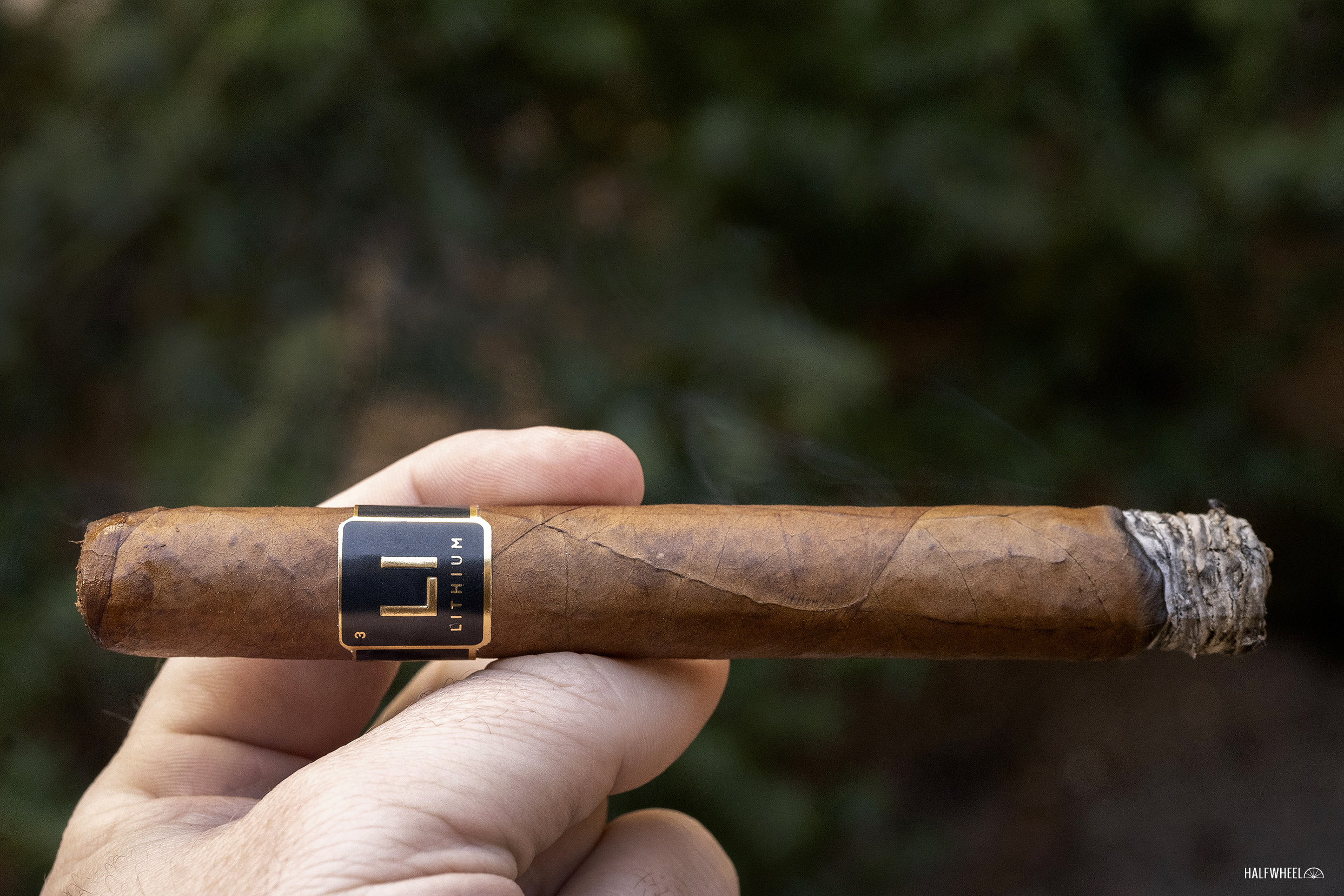 When looking to kick back after a long day, some people reach for a cigar and a drink. Jake Wyatt Cigar Co. is hoping you reach for Lithium.

While you may be thinking of the medication used for treating psychiatric issues, this Lithium is the name of the company’s latest line, which received a limited release in November. It is the seventh line for the fairly new company, which debuted in February 2020 with a handful of lines that featured a number of decorative tobacco flourishes

The cigar uses an Ecuadorian habano wrapper and Dominican binder and fillers, which the company says delivers a medium-full flavor profile. It gets its name from a hope that the company has that it can provide a calming effect on those who are looking to slow down and chill out a bit.

It is currently being offered in a single 6 x 50 vitola with both a covered foot and a pigtail cap. Pricing is set at $11 per cigar, and while the soft launch was offered in bundles, the company will put them in the boxes for the full release that is scheduled for the 2021 Premium Cigar Association Convention & Trade Show, currently slated to happen in July. The company has thus far only released 200 bundles of 10 cigars.

It is made at Tabacalera JVM in the Dominican Republic. 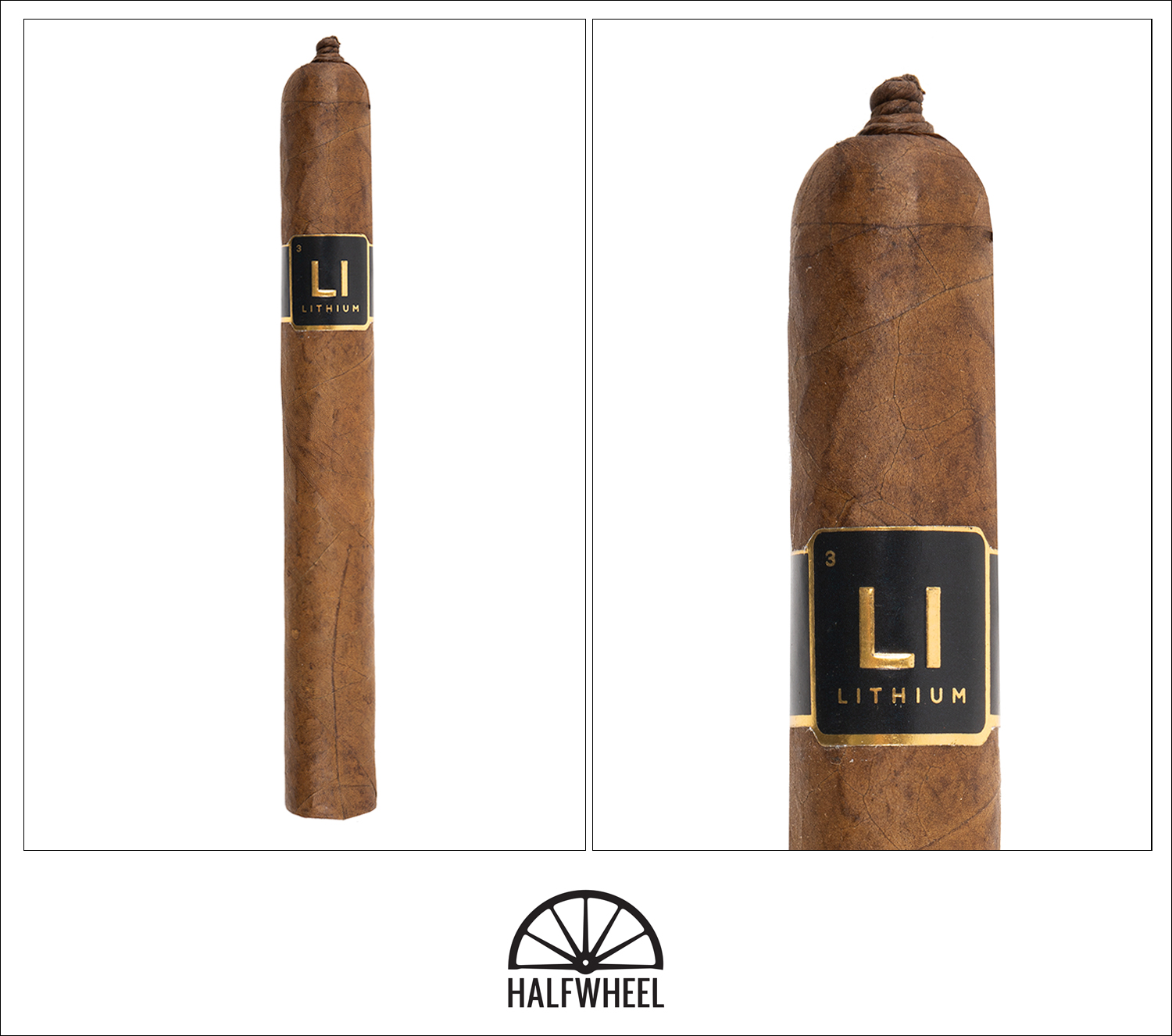 I’m immediately intrigued by the tightly coiled bun of tobacco that rises up from the head of the cigar, as it is about as perfectly crafted as I have seen on a cigar. Below that, the wrapper leaf has a bit of mottling, some decent tooth and the occasional prominent vein, but nothing about it would stop me from picking it out of the box. There is a bit of oiliness for the fingers while the sheen is minor, though the varies from cigar to cigar. The cigar is rolled rather firmly, certainly on par with where most of the industry is at these days. The foot has aromas that remind me of a tobacco warehouse; somewhat generic in terms of specific aromas, but rather a mix of aging tobacco, wood shelves, and general ambient smells, as well some occasional nuttiness. The cold draw is a tick tight on each sample, enough that I am a bit concerned about airflow, though it might be the covered foot impeding things a bit. Flavors are also a bit restrained here, offering a bit of nut butter, mixed nuts, and a flavor that is similar to what you might expect from reading the aroma.

Once the Jake Wyatt Lithium is lit, it turns out that covered foot was most likely impeding the airflow, as the draw improves noticeably once the foot has been toasted. The cigar has a much more fragrant and rich aroma and a fuller flavor than I would have envisioned, offering earthiness and a bit of campfire, as well as some black pepper that evolves to pick up a chili pepper sizzle on the tongue. The aroma lightens up rather quickly, moving into mixed nuts while bringing on a bit oiliness to the smoke and, in some cases, a bit of creaminess. There’s also a bit more pepper beginning to enter the equation as the first third continues to progress, though it’s more of an accent than a profile driver. By the one inch mark, the cigar is starting to show some funkiness, though it’s tough to describe other than suggesting something with the tobacco is just amiss. There is a bit of potato chip flavor emerging, particularly on the finish. There are a few spots where the profile really hits some solid notes, and some where it feels a bit out of tune, something that shows both variance among the samples and concerns me a bit for what might be yet to come. Retrohales generally escape any out-of-balance issues, offering some lighter, white pepper, a bit of creaminess, a hint of cedar and a pleasant tingling of the nostrils. Flavor starts medium-full before dialing back towards medium-plus, body is medium-full, and strength is medium-plus. The draw is a bit puzzling, but otherwise the cigar burns well with plenty of smoke and a fairly even burn line. 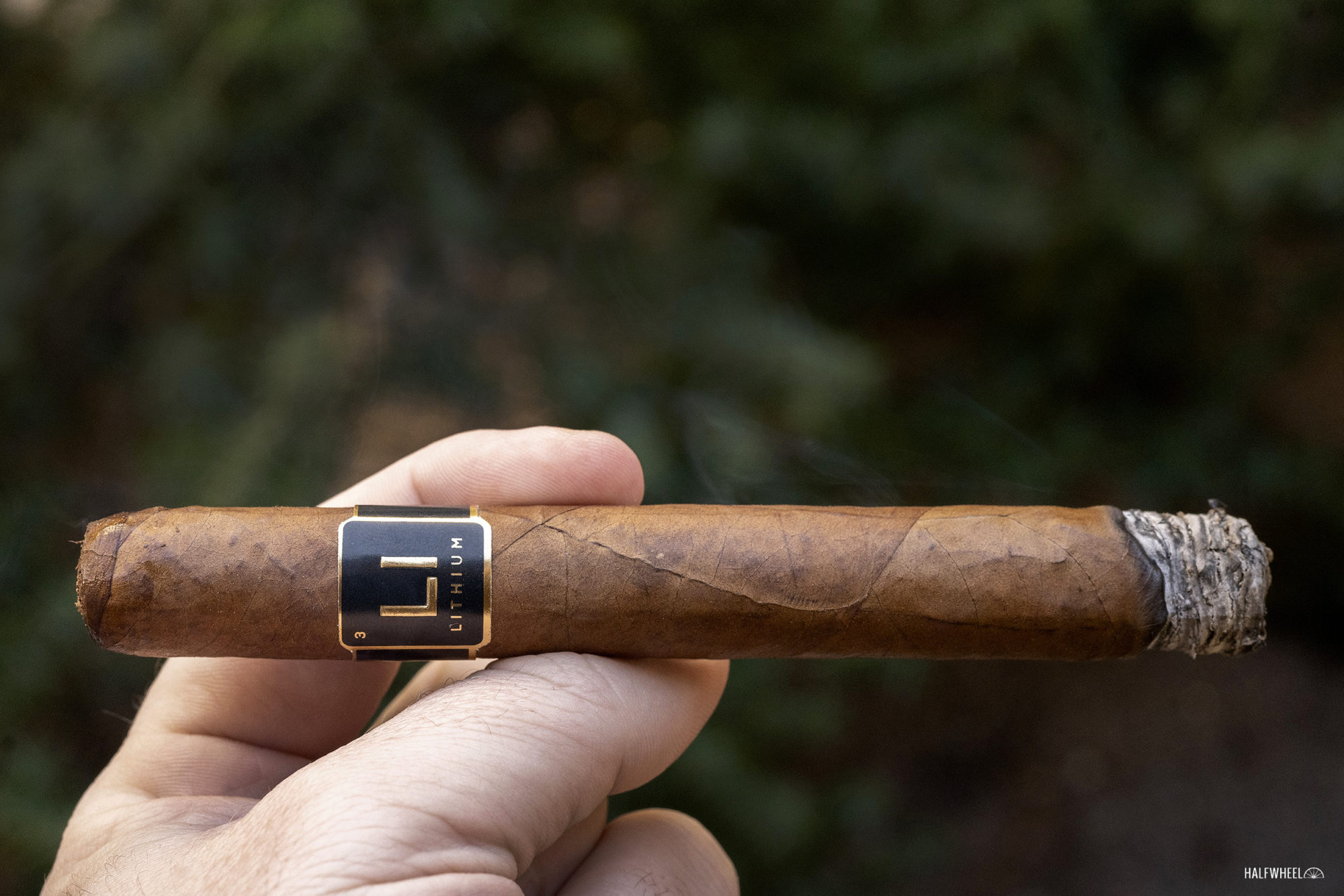 At the start of the second third, the cigar adds a bit of creaminess to the profile, and its thicker flavor seems to pair with the firmer draw that the cigar can offer on occasion. It’s also a match for the fairly thick smoke that the cigar has been emitting. There’s a fairly quick shift in the flavors to something that reminds me of a couple of types of what I would call natural cereals, nothing that has been heaped with sugar. While I’ve found cereal grain flavors in cigars before, this is definitely a new spin for my palate. One sample still has a bit of a plain potato chip flavor, which is familiar if a bit flat. There are times when I think I’m getting some typical Dominican flavors of terroir, though they’re not as refined as I would like and seem to be teetering out of balance with almost every puff. If anything, I’m struggling to find much of the Ecuadorian habano wrapper’s contribution, which is disappointing given that I generally like that varietal. Overall, the flavor is at a point that my palate struggles with it for most of the second third, and while it’s not inherently off-putting or harsh, it’s not something I’d see myself wanting more of either from the cigar or in general. The creaminess starts to return towards the end of the second third, though now with a bit more of a dairy or yogurt spin, which again is something fairly different. Combustion feels like it slows to a crawl in the final portion of the second third, though it is still putting off a healthy amount of smoke and the draw isn’t presenting any issues. Flavor is now medium-full, body is medium-plus, and strength is closer to medium. 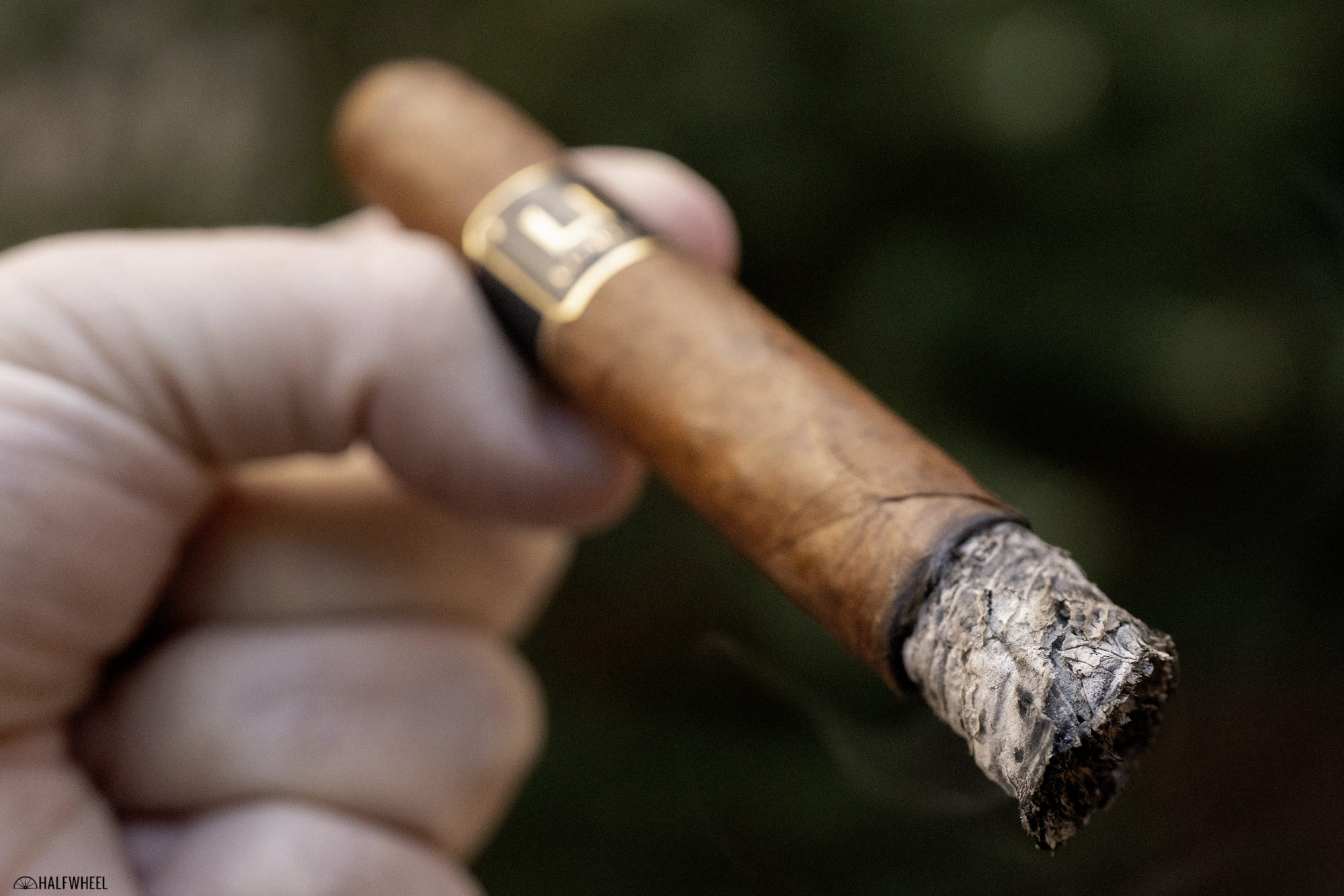 The final third of the Jake Wyatt Lithium is largely a continuation of the second third, with more of the cereal-like flavors, a bit of pepper and some Dominican terroir, though it seems like the blend is still trying to put things together into a more cohesive and palate-friendly offering. One sample does that fairly well, giving the cigar a bread base from which the other flavors expand. The final inches bring in more black pepper and shifts the cereal note to one reminiscent of plain Cheerios, which is both familiar and a bit more appealing. There is still a funky edge to everything, and while I don’t want to call it sour, that is the first word to come to mind. At times it even seems to have a slight bit of vegetal flavor to it, just enough to skew what could otherwise be a decent flavor. There are a few puffs to be found where the habano wrapper seems to shine through with some mouth-tingling pepper and woodiness, but for the most part, the cigar doesn’t do much of a job righting the flavor in the final inches, instead turning borderline sour and getting increasingly rough on the taste buds. Construction remains very good on the whole. Flavor and body finish medium-full, while strength seems to be fairly mild in terms of having an effect on my system. The Jake Wyatt Lithium offers some good puffs, but instead of the blend wanting to show off what it has to offer, it too often felt like it was trying to hide or escape from the funky flavors that turned things sour and less than friendly on the palate. Without knowing the specific origins or processes that brought about this tobacco, I’m inclined to start looking there for ways to improve the blend. Construction and combustion were both very good, and there’s enough potential with the flavor to remain intrigued by the Lithium, as one sample was easily better than the other two. The concern is what happens to the flavor when things aren’t right, as there’s just too much evidence from these samples that keep me hesitant about it.