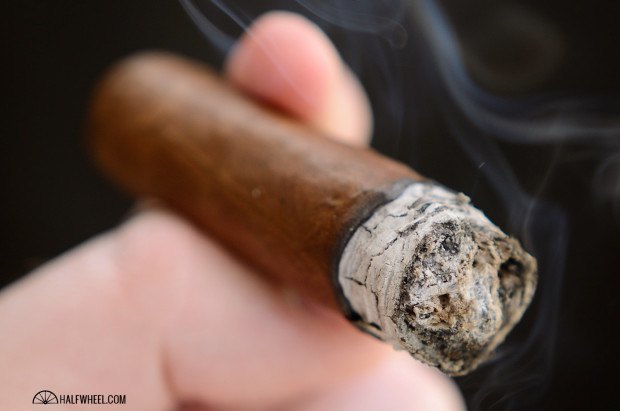 In January it was announced that Black Label Trading Co. and Cigar Federation were teaming up to do a special release called the J.W. Marshall. The cigar is named after James W. Marshall, the man who is credited with discovering gold in California on Jan. 24, 1848. With a release date of Jan. 24, 2016, the cigar celebrates the anniversary of that event, but that date also has special meaning to Logan Lawler of Cigar Federation, as his mother’s birthdate is Jan. 24 as well. With this release, a special golden ticket was included in at least one box, which gave the person who found it the chance to work with Black Label Trading Co. to create a special size of their choosing with the J.W. Marshall blend. The J.W. Marshall is quite striking, with the lack of a band bringing all the focus on the wrapper, which is a beautiful mottled medium brown that has the appearance of having been pulled tight over the bumpy binder underneath. It is smooth, soft and oily to the touch, while the aroma coming off of it is a mixture of barnyard, earth, leather and some light cocoa. The cold draw is pleasant, with cinnamon, chocolate and light vanilla.

Starting into the first third there is plenty of spice, pepper, cocoa, gingerbread and a nuttiness that all come together nicely to form an intriguing profile. The burn is nice and even, while the ash is dense and holds together to around the inch mark. Pepper starts to fade, while the spice seems to grow even stronger, taking a firm lead. Gingerbread has faded into the background and the the cocoa and nuttiness linger somewhere in the middle. The second third sees a continuation of the pepper fading further into the background, while the gingerbread note is all but gone at this point. What remains is a spice-forward profile, with cinnamon, nuttiness and cocoa mixing together nicely. The burn starts to go a little off, lagging behind in one section of the wrapper and requiring a touch up. As far as the draw, it is right in the middle of ideal, allowing plenty of smoke with each puff. With the pepper faded and the spice continuing up front, the profile settles into a routine that has the cinnamon, nuts and cocoa dancing around in the middle and complementing the spice note. Moving into the final third I don’t really detect much change in the profile of the J.W. Marshall, with the same notes continuing as before. The burn is still not wanting to fully cooperate, needing another touch up, though the burn line doesn’t seem to overly affect the profile. In the final inch there is a slight harshness that crops up, though this is the first time that it’s appeared and it isn’t enough to put too much of a damper on the final bit of the cigar. Historically, I’ve enjoyed Black Label Trading Co.’s offerings, and so I was excited to get to try the J.W. Marshall. It certainly brought many good things to the table, mainly that of an enjoyable profile that progressed and changed enough to keep things interesting while not losing site of its main flavors that really made the cigar shine. The few touch ups that were needed throughout didn’t really put a damper on the whole experience, as they were minor in nature and didn’t appear to affect the profile too negatively. I’d suggest you go grab yourself a box, but unfortunately these appear to be long sold out, which isn’t surprising given the limited number of boxes that were created. If you can find these on the secondary market however, they would certainly be something you should consider picking up.