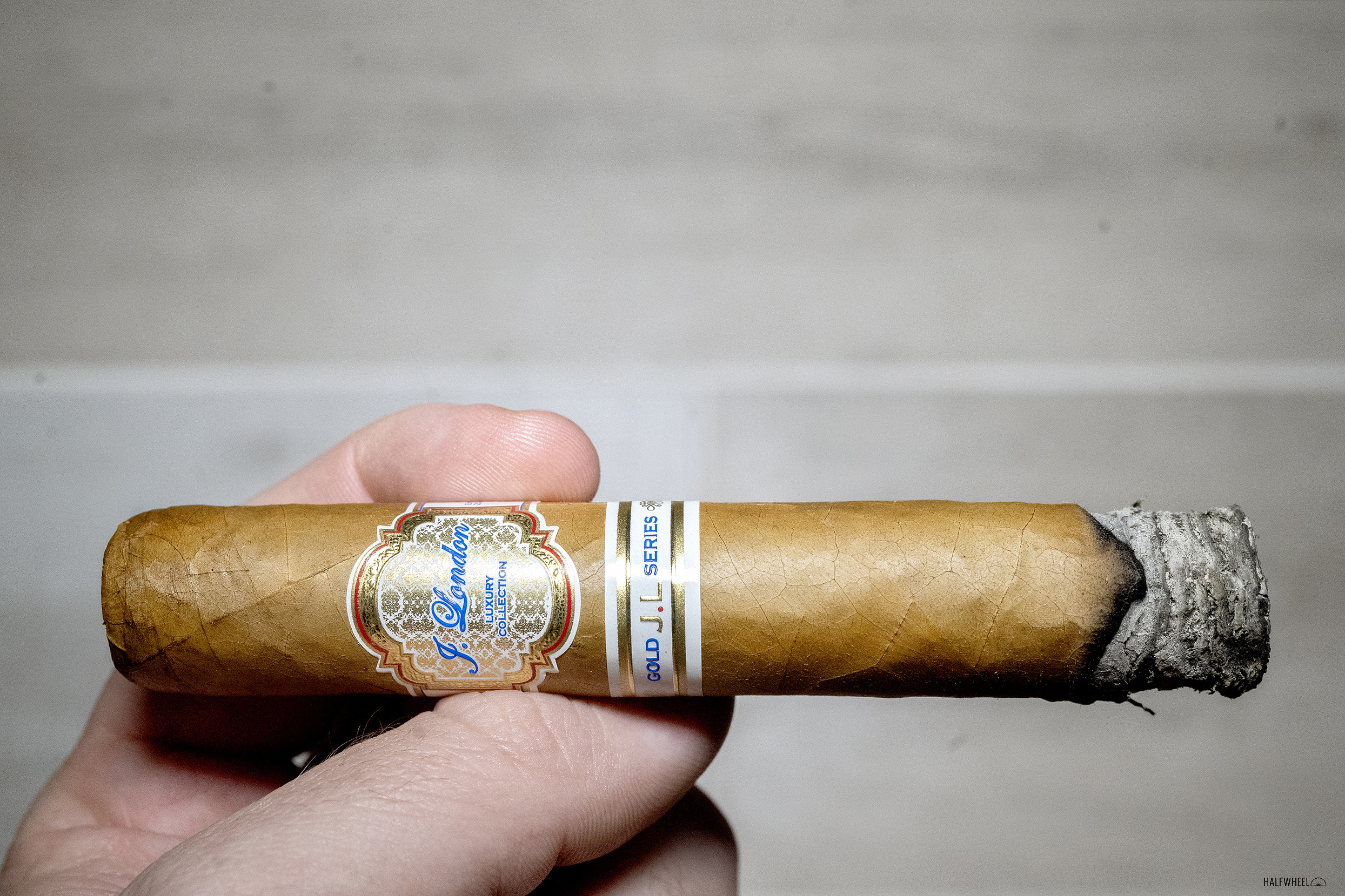 I don’t remember exactly who I was having this conversation with recently, but the topic of small cigar brands came up, and not what we think of as boutique brands that have regional or national availability, but truly small brands. Ones that may only be available in a handful of stores, or don’t seek national attention or are still in their early growth phase.

There wasn’t really a resolution to the discussion, other than to agree that there were likely more brands out there whose names have never appeared on this site or others than we were likely aware. This is what leads me to this cigar, the J. London Gold Series Fat Robusto. In 2021, J. London made both its PCA Convention & Trade Show debut, as well as its debut on halfwheel, even though the brand has been around since 2014. The company was launched by Jonathan Fiant and its Gold Series premiered at The Marquee, a private club in Houston that year, with two vitolas, a robusto and lonsdale offered. Two more vitolas—a lancero and toro—would be added in 2017, while a box-pressed robusto would join the portfolio in 2020.

This year, four more sizes were added, the Belicosos Fino, a short panetela called the Queen’s Guard, an ‘A’ vitola that is a retailer exclusive, and this cigar, the Fat Robusto.

The J. London Gold Series Fat Robusto was unveiled at the 2021 PCA Convention & Trade Show and is a very limited production, with just 500 packs of five cigars being released, a total run of 2,500 cigars. It’s part of a series of small batches of specific vitolas that Fiant is making, with each batch coming wrapped in some sort of artwork. Though the idea of small batches isn’t new to J. London, as the company only produces 750 individually numbered boxes of its regular production sizes every year.

The blend features an Ecuadorian Connecticut wrapper and what the company describes as a “wrapper-grade binder.” While the “wrapper-grade” might jump out to you as the unique part, the combination of Connecticut wrapper and Connecticut binder isn’t seen everyday; the fillers are from the Dominican Republic. Both the wrapper and binder are described as being aged, though the company doesn’t provide an age statement for them, while it says the fillers have been aged for three to four years. The line is produced at Tabacalera William Ventura in the Dominican Republic. When looking at the J. London Gold Series Fat Robusto, the word that I’m most puzzled by is fat, as it doesn’t seem like it’s much thicker than a more standard 50 ring gauge robusto. So much so that I pull out a device to measure its ring gauge, and sure enough it’s a bit thicker than a 54 but seemingly just shy of a 56, but certainly close enough that I don’t think the cigar is underdelivering. The wrapper leaf is slightly oily and well-tanned, with a shade that evokes the words caramel, butterscotch and toffee. I’m intrigued by some ridges on the cigar, which might be from the veins underneath but almost look like remnants from being in the cigar molds. Otherwise, the cigar looks rolled very well, the seams are flat and the head is applied well, if maybe a bit flatter than the average. It’s also fairly firm, though I’m not going to squeeze it or handle too much so as to avoid causing damage. The foot has a fairly mild white bread aroma, though a bit of white pepper helps give it a bit of zip in the nose. There is also a bit of very light creaminess, occasional aromas of popcorn and toast. There’s just a touch of resistance on the cold draw, while the flavor is more defined and once again bread forward, with a bit of pretzel dough as well. Also, if there’s creaminess in the aroma, it seems to repeat here, though it won’t show up if not in the aroma. I can’t say there’s much in the way of pepper or sweetness, but the flavor does linger on my taste buds for a bit.

I’m not too surprised by what the J. London Gold Series Fat Robusto has to offer at its onset, as a mild, slightly creamy and bread-forward profile starts things off, only to be joined by a good amount of black pepper through the nose before the burn line is at the half-inch point. It’s definitely done well, and when the two sensations come together either on their own or by way of a puff-and-retrohale combo, the result is a tick or two better. That bread note occasionally leans towards sourdough as opposed to a plain white bread, a flavor I generally like but have never been crazy about in cigars. The combination of bread, sourdough and white pepper is the hallmark of the first third, not changing too much but consistently delivering a solid medium to medium-plus intensity of flavor to my taste buds, while body is medium-minus and strength is mild thus far. Construction and combustion, along with the burn line and smoke production, are all excellent.

The second third sees the cigar get a bit more assertive with its profile, maybe even aggressive depending on the puff and where one draws the line between the two terms. There’s a bit of irritation in the throat, a seeming progression of the pepper’s role in the profile as it is now a shifting mix of white and black pepper. A sweet, creamy flavor emerges at the midway point, much like what I’d expect to taste from a bottle of coffee creamer, not quite as sweet as vanilla but a bit sweeter than a plain option. There’s a bit of buttery cracker entering the profile after that, not too far off from my memories of Ritz crackers, though I haven’t had one of those for years. Flavor has dialed itself back to medium, or medium-plus if you retrohale, body is up to medium and strength is just shy of medium. The technical performance remains very good, with only a slightly uneven burn line worthy of noting. If there’s one thing I can say with certainty is that the J. London Gold Series Fat Robusto certainly keeps the flavor progressing, as there is now a smoky, slightly earthy flavor taking over the reins at the burn line enters the first third. It’s a bit of a spent campfire sensation that leaves just enough room around the edges for the creamer flavor from earlier to hang on, but also one that lingers much more prevalently on the finish, and which evolves to offer a bit of pepper at its tail. It is a much more robust profile, one that seems to be calling out for a Scotch much more so than the creamy coffee that the first third with which the first third would have been better paired. That said, there are some spots where I get a bit of graham cracker, as well as others where I get some more of the sourdough bread flavor, which are a plus and a slight minus for my palate, respectively. The combustion rate doesn’t seem to slow that much in the final third, but the burn line does feel like it crawls to the finish, seemingly wanting to give me every puff it has to offer. Flavor finishes a robust medium-full, body is right behind it at medium-plus, and strength is medium at most. First and foremost, consider me impressed by pretty much everything that the J. London Gold Series Fat Robusto has to offer. While it certainly falls into the category of the stronger, more peppery Connecticut-wrapped cigar, it does it very well, definitely above the average for the category and arguably closer to the top of it. Its strongest suit may be its ability to progress the flavors from a milder beginning to a more robust finish without ever falling off the path, achieving the difficult task of maintaining both balance and complexity. That's not to say it's the most complex cigar you will find, and there are times when the pepper or robustness take the wheel a bit too much, but never enough to turn me away from what it has to offer. After three samples, my only real gripe is the price; while we don't factor it into the review or rating, the proposition of this cigar costing $20 before taxes is a tougher one to resolve. But if you're looking for a new option in this part of the flavor profile, the J. London Gold Series Fat Robusto is definitely worth serious consideration.