While Jesus Fuego built the foundation of his company in the premium cigar market, he tended to stay on the wallet friendly side of the price spectrum, with the bulk of his releases coming under the $7 price point. In 2012, Fuego announced that he was making his first foray into the “ultra-premium” cigar market by way of the J. Fuego Edición de Familia.

This new release was supposed to be on display at the 2012 IPCPR trade show, but Fuego decided against it as it had sold out prior to the doors opening, with 150 retailers each receiving five boxes of each of the three sizes.

Two of the three sizes—the Belicoso Fino and Toro—come box-pressed and without cellophane or other protective packaging, while the Robusto is round and comes in a glass tube.

While the cigar and box both mention the year 2012, the cigars trace their origins back much further, as Fuego said that the youngest leaf used in the Edición de Familia is the wrapper, and that was 10-years-old when the cigar came out. In addition, the cigars also received a full year of rest before being released: six months in the traditional aging room bundles and another six months in the boxes that would end up at retail.

Here’s what I said in my original review of the J. Fuego Edición de Familia Belicoso Fino from November 2012:

The Edición de Familia is certainly a bit of a departure from Jesus Fuego’s other cigars, not just in terms of price and quantity produced, but also in terms of flavor. His core lines tend to be a bit more upfront with their flavor, while this cigar asks you to sit and enjoy it, focusing on the mellower flavors it delivers thanks to the aging of the leaves used to create it. It has some very familiar notes that make you feel right at ease, but also forces you to pay attention to its subtle changes and quieter notes. Given the aging already done to these, I’m not sure they will be cigars for the long haul, meaning I’ll be plucking one from the box every couple of months to see how it continues to mature and develop.

The wrapper is a light leather brown color with good color uniformity, very small veins and just the finest bit of texture to it. It’s firm to the touch with just a bit of give, and the box press still looks as even and crisp as when it was new, save for maybe the slightest bit of rounding at the foot. But much like the first time I fired this cigar up, the eye gets drawn to the belicoso head, fairly short with sloping sides, which when clipped seems to narrow the air channel ever so slightly, as opposed to belicosos with more pronounced and tapered belicosos. The pre-light aroma has meshed together to become almost potpourri like, with a sweet apple crispness and a light, dry wood note making up most of the offering. The cold draw is just a touch firm and repeats the wood note with a touch of sweetness but none of the spice I noted in my original review.

There is just a touch of candied apple that greets the palate when the cigar is lit up before flavors become a bit more robust and pick up notes of wood a touch of earth. It takes almost an inch of the cigar to burn before the sweetness that dominated the first third when the cigar was first smoked makes an appearance, but when it does, the butterscotch candy note is really enjoyable, joined by just a pinch of pepper that creates an interesting back and forth between the palate and nose. Much like in the original, the burn line has a tough time staying straight and even but otherwise the cigar seems to burn just fine, putting off slightly below average smoke quantity. The sweetness is fleeting as the J. Fuego Edición de Familia Belicoso Fino returns to its wood base and adds a good bit of earth to the mix, highlighted by a touch of clay and a faint amount of pepper. 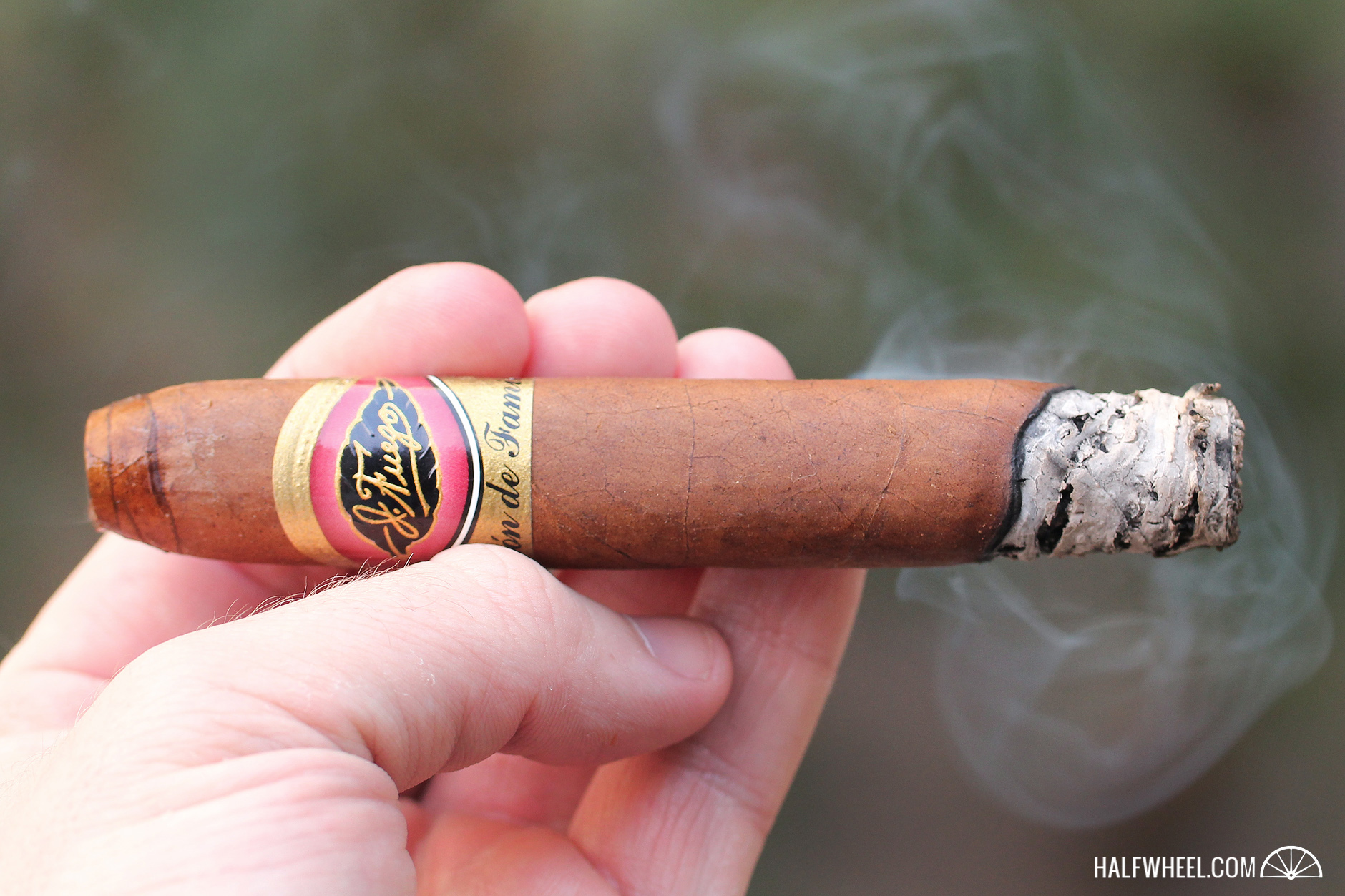 The second half of the J. Fuego Edición de Familia Belicoso Fino seems to reflect the age of the leaves and the rest the cigar has had since being released more so than the first half, as the flavor transitions are much less pronounced and are overall much mellower, requiring a bit more attention to pull out their nuances. The wood note has become a bit lighter, while the smoke comes across as just a bit warmer. In the final third, the flavor and pepper come roaring back to life and turn up the intensity a bit, with more spice than had previously been found now leading the charge in the final inches. The wood and earth note are upfront yet remain balanced and enjoyable as the cigar approaches its final puffs.

If there's one bet I'm glad I didn't make after reviewing the J. Fuego Edición de Familia Belicoso Fino, it's that it wouldn't taste as good 15 months later. While there's no question that the flavors have evolved and are a bit more subtle, the cigar still offers plenty to enjoy and pay attention to through both upfront and more understated notes. While the Edición de Familia remains a bit of a departure from Fuego's core lines, I still find it as enjoyable now as I did when it came out and a worthy cigar to have from time to time. Hopefully the cigar stays as enjoyable as the tobacco that makes it up enters its teenage years.