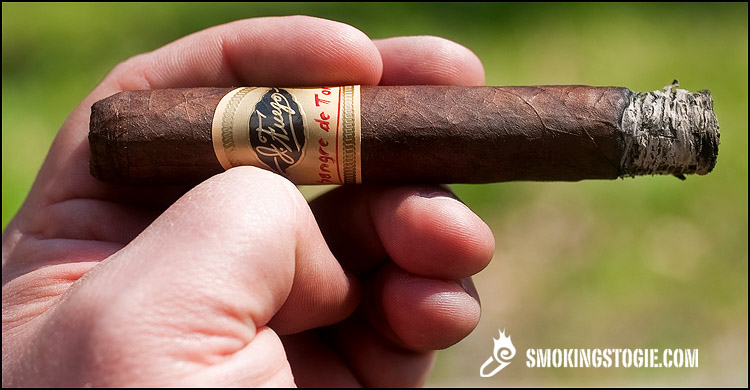 Last month, Jesus Fuego started sending out samples of his newest creation, the Sangre de Toro, which roughly translates to bull’s blood. It is a Nicaraguan puro that gets its name from the dark, reddish wrapper, which has nothing to do with bull fighting.

(The Wrapper) was also the name used in Cuba for the dark and rich Colorado wrapper like the one I used here.

J. Fuego won our Best Cigar for Under $2 last year with his amazingly priced Origin Originals, so I was extremely eager to see what he could do with this blend.

The Sangre de Toro comes in four different vitolas and prices at this point and time, all in boxes of 21. The cigar itself seems well rolled with a very dark reddish brown wrapper that is slightly rough to the touch, and have some oil on it. The wrapper smells strongly of sweet wood, peppermint, spice and yes, pickles. It is just a bit on the hard side when squeezed, but not overly or annoyingly so. The cold draw includes strong dark chocolate, oak and black pepper.

It starts off with a strong sweetness, flavors of wood and chocolate with a bit of leather thrown in. It is not a pepper bomb by any means, but there is some nice spice on the tongue that stays around for pretty much the whole smoke.

The sweetness stays fairly strong until the end of the cigar, but other flavors ebb and flow for the whole smoke. Along with the flavors above, I pick up notes of vanilla, oak, leather, sweet earth, creamy coffee, roasted nuts and dry coca. The finish is also excellent and I love that the pepper and spice remain in the profile, albeit at different strengths, until the end of the smoke. The J. Fuego Sangre de Toro has been getting rave reviews everywhere you look, and for good reason. This cigar is loaded with great flavors, extremely balanced and draws like a dream. At a price point under $6 each, it is easily one of the best cigar in that price range. I will be buying a box without a doubt.