For some reason, it seems as if we’ve been writing about and reviewing anniversary cigars quite a bit as of late. It certainly hasn’t been intentional, just an interesting byproduct of the way the schedule has shaken out.

This cigar is another anniversary release, yet it dates back over a decade to when the J.C. Newman Cigar Co. celebrated its 110th anniversary in 2005, and the company decided to go back to the very beginning for the cigar’s inspiration.

When Julius Caesar Newman began making cigars in 1895, the perfecto was one of, if not the most popular shapes in the cigar industry. Tapered at both ends, the vitola lives on to this day, though isn’t seen nearly often enough to earn it that title. J.C. Newman’s first batch of 500 cigars were that vitola, making it the fitting size with which to mark the anniversary.

J.C. Newman picked the perfecto vitola for its 110th anniversary cigars, a foursome of sticks from the company’s top lines at the time: Cuesta-Rey CentroFino Sungrown, Diamond Crown, Diamond Crown Maximus and La Unica Cameroon. Known as the “1895 shape,” the cigar measures 4 1/2 inches in length with a ring gauge that sits right between 52 and 54 at its fattest before tapering down to about a 26 at the head and foot.

To dress things up, each cigar was encased in a thick, hand-blown glass tubo with a brass closure band and individually numbered, with those tubos than packed into humidors containing 40 cigars. A total of 250 humidors were produced, each one containing 10 each of the four blends contained on a separate shelf of the humidor. A total of 2,500 cigars per blend and just 10,000 for the entire 110th anniversary release were made, all produced by Tabacalera A. Fuente y Cia. in the Dominican Republic.

The humidors that the cigars came in were crafted by Reed & Barton, a name that might not be immediately recognizable but is the company that made J.C. Newman’s Diamond Crown humidor line. Each one featured a French door opening and contained a pair of Diamond Crown humidification units and came priced between $1,000 and $1,200. 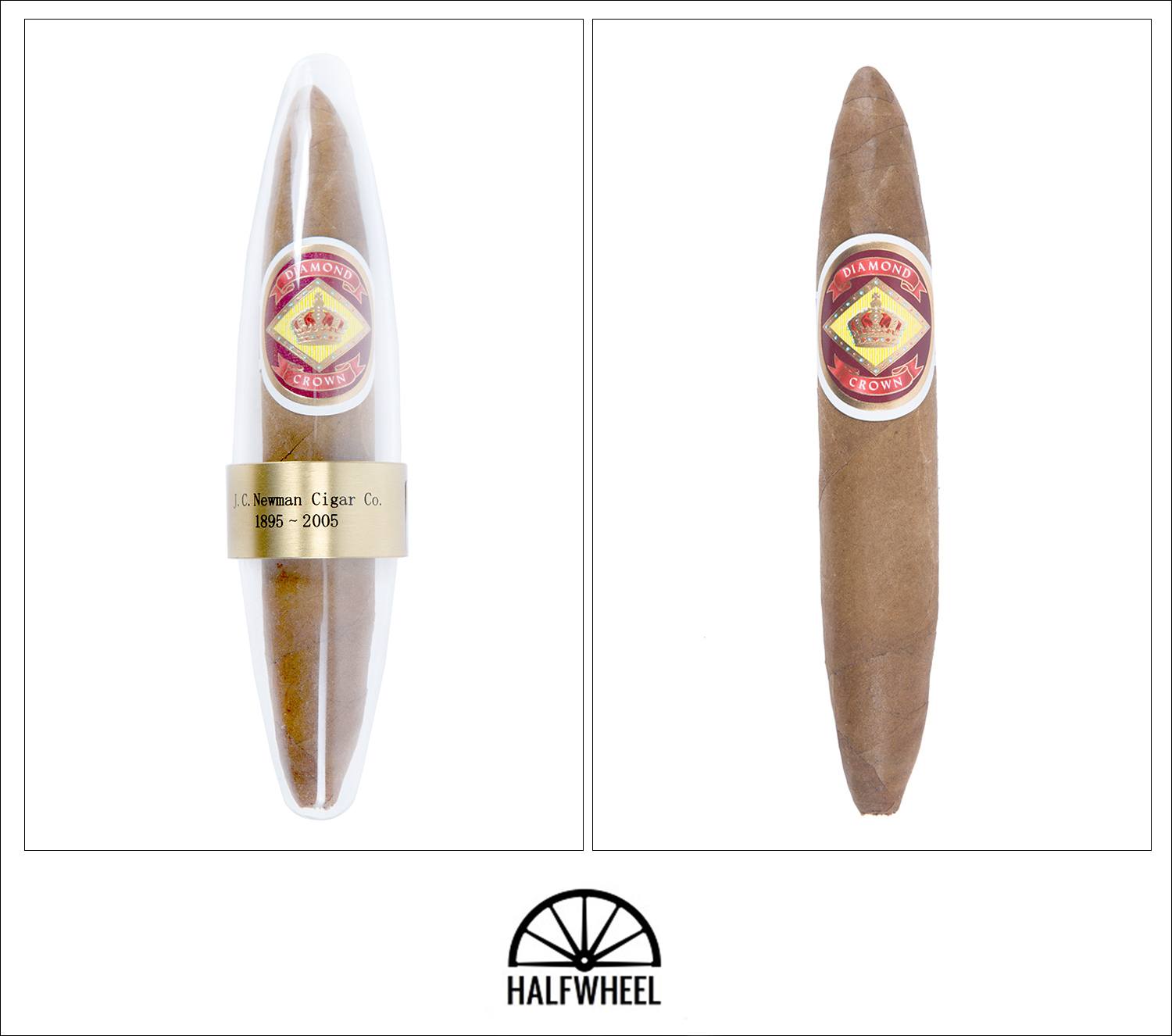 While perfectos aren’t the most common vitola in the industry, and tubos are relatively common, the presentation of the J.C. Newman 110th Anniversary is uniquely striking. The glass is thick and heavy in the hand, while the gold ring that sits where the top and bottom halves of the case meet is also fairly substantial. The cigar has kept its beauty quite well after more than a decade, and other than a slightly matte finish on the wrapper, it would be hard to tell this apart from something currently available. The wrapper is a butterscotch hue, just slightly tanned and with very few veins and no tooth. The seams are flat, the roll is clean and firm, and other than a small glue spot beneath where the band meets, there’s nothing to complain about. As is the case with a lot of bands on figurados, this one is loose and wants to slide off, something I would do immediately were it not for the photos. The pre-light aroma doesn’t tip the cigar’s hand, staying very neutral with just a touch of generic bread and unsalted peanut offered for the nose. The cold draw is only slightly more revealing, adding a bit of cedar to the profile while air moves decently for being channeled through small passageways at both the foot and head of the cigar.

The bread notes that I picked up prove to be the best indicator of how the J.C. Newman 110th Anniversary will get started, though it manifests as sourdough much more once lit. While not coming out guns-a-blazing with strength, there’s a decent amount of subtle flavor that begins to mix in a latte, pizza dough and just a touch of pepper that’s first picked up via a retrohale. While the cigar doesn’t put off a ton of smoke, it is sufficient enough to coat the palate and provide solid retrohales. I don’t think of the current Diamond Crown blend as being overly strong, 10 years has mellowed it even further and really requests the full attention of your senses to pick out everything it has to offer. The ash finally calls it quits at an inch in length and the draw opens up just a touch, with a more lingering pepper note not detected on my palate. Sweet cedar begins to emerge in the aroma as the transition to the second third gets underway, with the burn line near razor sharp. 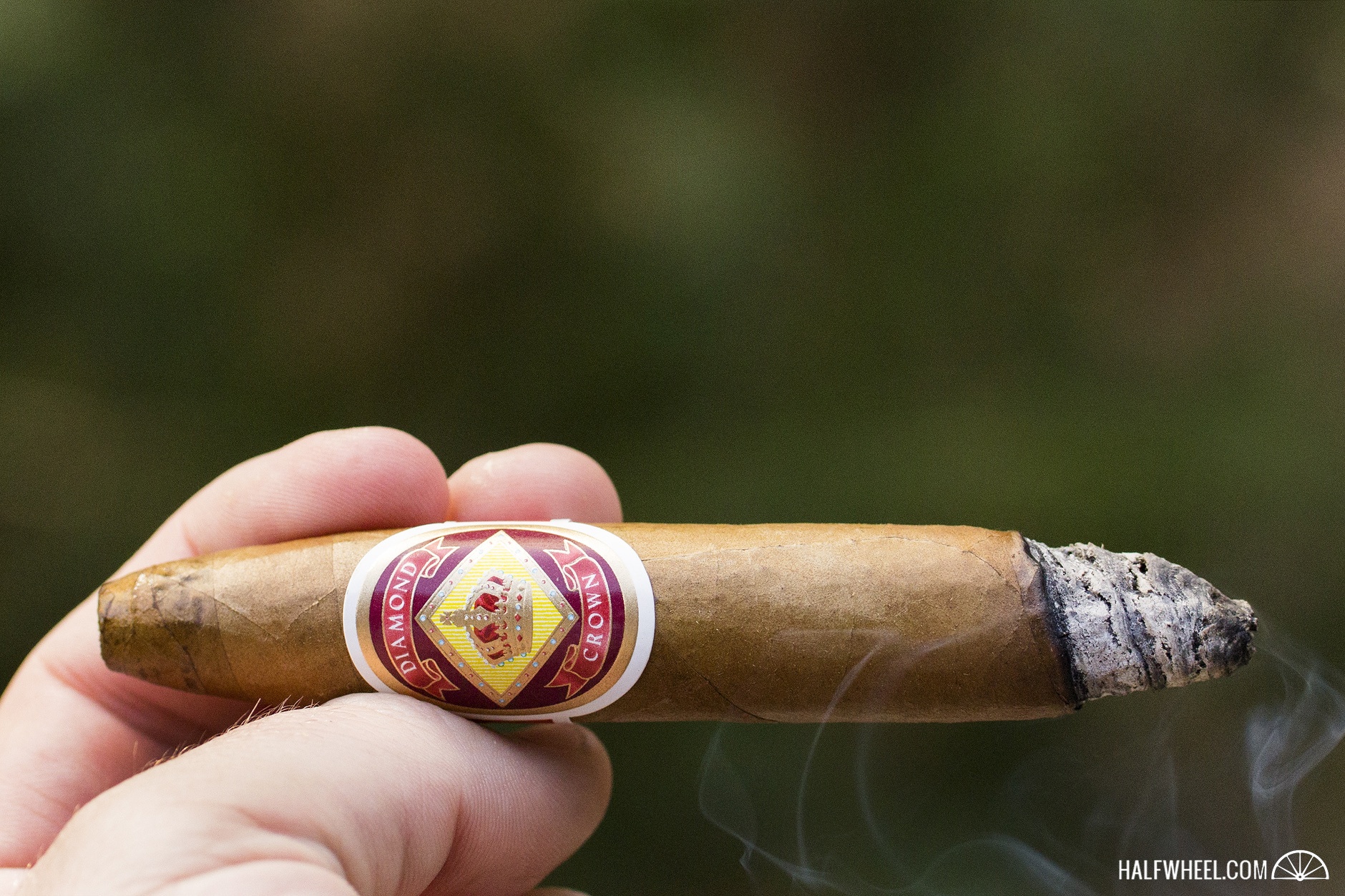 I’m a bit to eager to take a retrohale at the start of the second third and the Diamond Crown quickly reminds me that it hasn’t lost all of its punch, hitting my nostrils with a punch from very clean table pepper that has lost whatever roughness it might have once contained. The flavor picks up a bit more body than it had, and the draw is noticeable more open as the burn line is now in the fattest part of the cigar. I must give the cigar a tremendous bit of credit for how well it is burning, as it feels like every piece of tobacco is working together and resulting in a crisp and even burn line. Just past the midpoint, the pepper has dialed itself back a bit without completely leaving the picture, and the flavor is definitely on the mild side and rooted in fresh baked pretzels, at least until I can say the transition to the final third gets underway, when the pepper quickly ramps back up and I get a quite interesting flavor that is thick and woody, yet for a fleeting puff or two reminds me of celery. 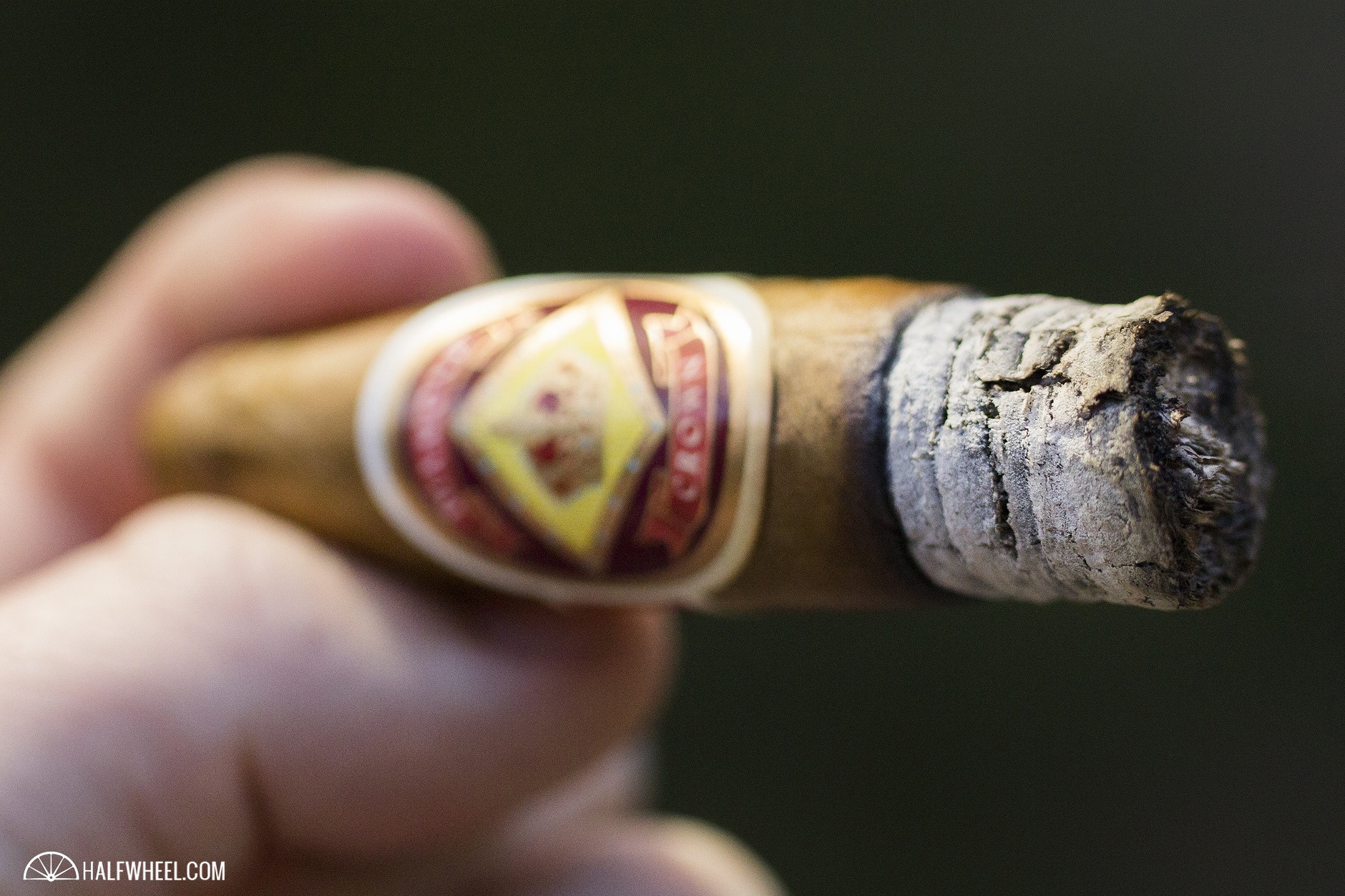 The start of the final third shows that the Diamond Crown 110th Anniversary isn’t out of tricks yet. The bread note that has been with the cigar most of the way becomes dry and crunchy as if a French baguette, while a new spin on cedar has joined the mix along a helping of black pepper. There’s also a bit of chalk beginning to emerge in the steadily warming smoke, and the draw has tightened up a tick or two as well as the ring gauge shrinks back down. The cigar tastes much more modern in its final inch and a half, with a good amount of textured black pepper and backing notes of dry earth and lumber. The cigar burns near flawlessly down to a tiny nub, and the flavor warrants a draw poker to help get every last puff out of it, which finishes with a bit more chalk, tempered amounts of pepper and a newfound metallic tingle on the lips. 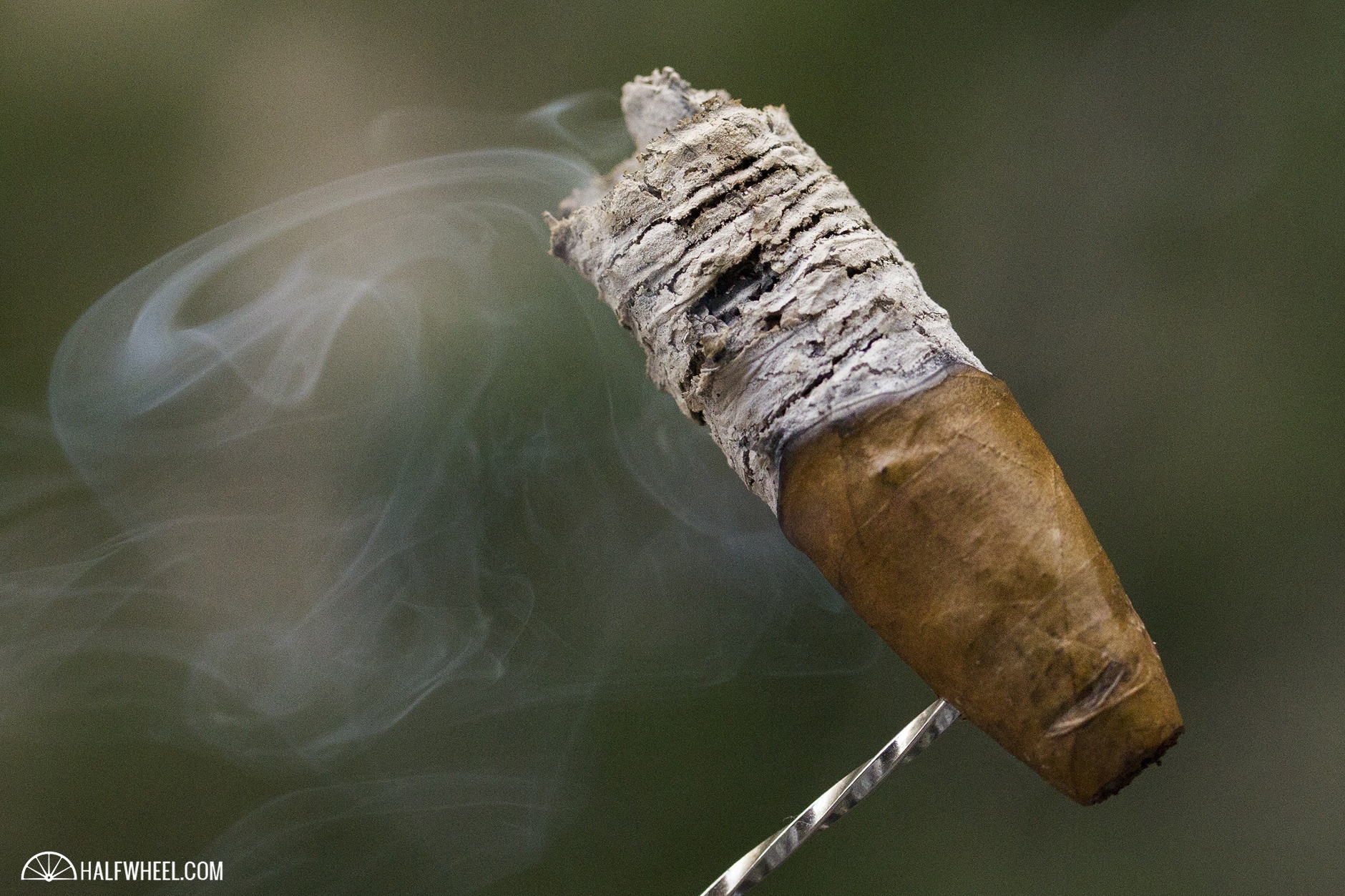 More than a decade of age makes this unfair to compare to an off-the-shelf Diamond Crown, so I won't even attempt that. While strength is on the mild side as would be expected, 10 years of rest hasn't done much to diminish the flavor that this cigar offers, which during the second third in particular is surprisingly punchy. The pepper is still quite vibrant and the flavor shows noticeable evolutions, while the burn is near flawless from start to finish. A gem of a cigar that I'm fortunate to have had the opportunity to smoke.